You are here: Home / Breeds / Your Pitbull Yorkie Mix: Is this Hybrid Dog Right for You? 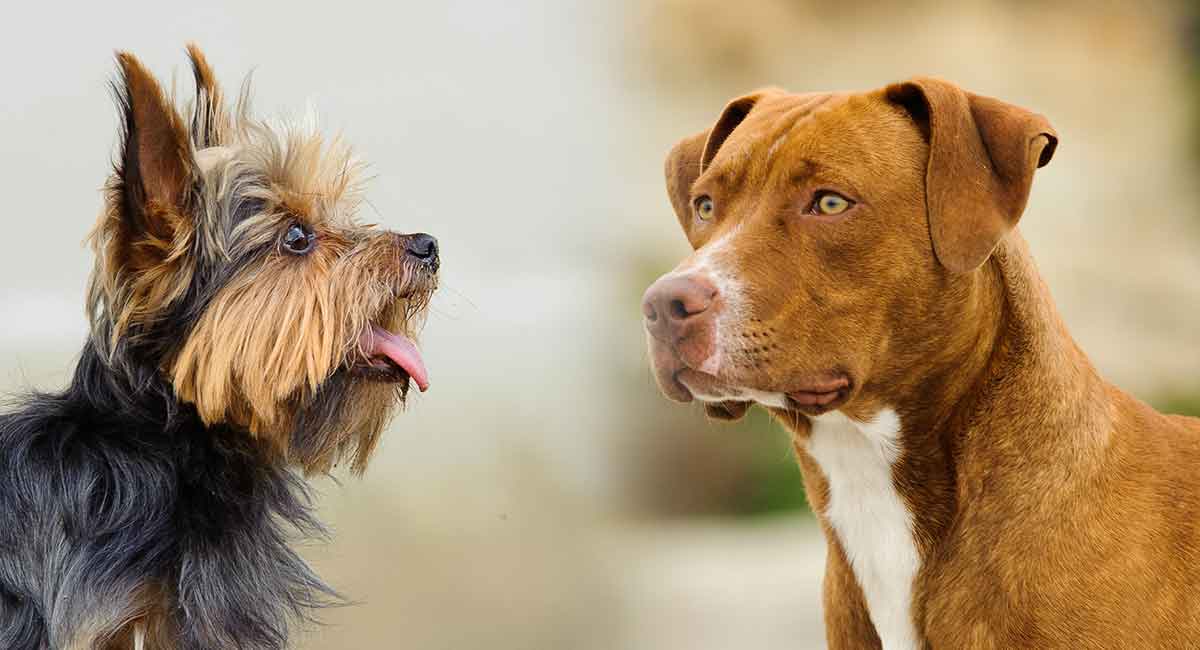 The Pitbull Yorkie mix combines two very different dog breeds. So what can you expect from this cute crossover?

Although both Terrier breeds, the Pitbull and Yorkshire Terrier have rather different routes and looks.

There are a few things you can predict about this mix.

But what kind of a pet is this puppy? Is it the right choice for you and your family?

To find out, let’s start.

Where Does the Pitbull Yorkshire Terrier Mix Come From?

The Pitbull Yorkie mix is bred by combining a Pitbull parent with a Yorkshire Terrier parent.

But while the Yorkie is an American Kennel Club (AKC) recognized purebred, the “Pitbull” is an informal dog type.

This means that the parents may be registered in one line, but not in the other.

The Pitbull is thought to descend from 19th century Bull and Terrier dogs.

They were created by crossbreeding old English breeds of Bulldog and Terrier.

This creates a versatile animal adept at “pit fighting” but also useful for hunting and as a household pet.

They are medium-size dogs with a short coat, muscular build, block head and short muzzle.

The Yorkshire Terrier, or “Yorkie,” was also developed from a number of other breeds in England in the late 19th century.

In this case, the contributing breeds were all small Terrier types.

Yorkies were initially employed to control rats and other vermin in factories and mines.

Now they are popular as companion animals.

They are a small dog with a long coat that is silky or wiry.

These very small dogs resemble a toy breed more than a scrappy Terrier.

However, after the year 2000, there was a resurgence in the popularity of so-called “hybrid” or “designer” dogs.

Crossing breeds in this manner produces a range of attractive dog types combining the traits of both parent breeds.

But the outcome is not as predictable as it is in purebreds.

It is commonly believed that these dogs may be free of the inherited disorders common to many pedigree breeds.

However, it’s incorrect to assume this is always the case.

Carefully consider genetic health and any observed extremes of conformation when selecting a dog and planning for its care.

Consider a veterinary wellness plan or veterinary insurance ahead of time.

However, just as with a purebred dog, you can increase your odds of a healthy puppy by choosing one with two health-tested parents.

The Pitbull x Yorkie is not a popular “hybrid” dog, as shown by a lack of a cute name for this combination. Porkie? Yortbull?

This cross typically results from amateur or accidental breeding, and is uncommon.

For this reason, the characteristics of this cross are not well well-established or documented.

But they do crop up from time to time.

When they do, they are typically somewhere between the parent breeds in size as small to medium dogs.

Color may be variable, often tawny, tawny and brown, or grey-black.

Upright ears are common, along with common general Terrier traits such as a strong but less bulky frame.

While tail docking was traditional with Terrier breeds, it is both undesirable and potentially damaging to the dog’s welfare.

It is not recommended for these dogs.

The same can be said about ear cropping of any dogs resembling Pitbulls.

Pitbulls and Yorkies share a strong Terrier background, and their puppies are likely to be the same.

This mix is likely to be bold and energetic, with a high prey drive.

They may also show aggression to other dogs if not well-socialized.

Both parent breeds are commonly loyal, people-pleasing and sensitive to the feelings of their primary handler.

Owners need to be alert to their puppy’s temperament as it emerges.

React quickly to any undesirable traits that are displayed, with a program of exposure and training.

Adopted adult dogs should be given time to adjust and bond with new owners before introducing consistent training expectations.

The intelligence and loyalty of dogs with a strong Terrier heritage make them rewarding to train.

However, the owner should be prepared for occasional stubbornness.

These dogs are typically highly intelligent and strong willed.

They need plenty of exercise during the day to keep them happy and content.

These pups enjoy exercise that engages their brains as well as their bodies.

They do well in active homes where they spend lots of time with the families.

They don’t do well if left for long periods, and can become destructive or noisy.

Your puppy is at risk of inheriting diseases related to either one of their parents.

It’s important to make sure that both of their parents are tested for conditions relevant to their own breed.

Yorkshire Terriers are known to have an increased risk for a range of inherited disorders, especially miniature Yorkies.

Owners should be alert to conformation issues relating to the eyes and skeletal system.

Breeding from Yorkies under 4 pounds in size can be especially problematic.

The breeding of these teacup dogs has sometimes been reckless and detrimental to the animal’s health.

Given the difference in size, Yorkies should not be the dam in this cross.

They may have difficulties delivering overly large puppies.

In general, breeding of dogs with size disparity should be considered with caution.

Keep the welfare of the dogs and offspring in mind.

Both Yorkies and American Pitbull Terriers are known for showing higher rates of degenerative myelopathy (a progressive disorder of the spine).

This raises the possibility of inheritance of the mutated gene from both parents.

It’s important to make sure that both parents are healthy to increase the chances that your puppy has a long and happy life.

Any small or medium Terrier mix is likely to be a suitable family dog.

Just make sure to provide socialization for puppies, as well as consistent training and ample exercise for the dog’s mind and body.

These dogs thrive on companionship and activity.

They may have a “favorite” person of their own choice regardless of which family member initially acquires the dog.

Some vigilance must be shown in relation to any signs of aggression.

Some research indicates that Yorkshire Terriers may have an increased tendency toward aggression toward strangers.

Why Socialization Matters So Much for Dogs

Pitbull types may be more aggressive toward other dogs.

As a dog owner, you have the power to increase the likelihood of your puppy turning into a friendly adult.

The right care, housing, training and neutering choices can improve your odds of raising a friendly puppy.

Make sure that you meet both parents, and that they are both relaxed and confident around strangers.

Begin socialization straight away when you bring your puppy home, and only use positive reinforcement methods.

Traditional punishment-based methods can cause you to come into conflict with your dog.

If you ignore signals that they are upset, you increase the risks of physical aggression further down the line.

Pros and Cons of Getting a Pitbull Yorkie Mix

A Pitbulll x Yorkie is a smaller dog that is energetic and intelligent—an eager companion especially for more active people or families.

They may be challenging for a novice owner who is not confident and consistent in their training.

They prefer to have company rather than be left alone for extended periods.

In less ideal conditions, they may provide stubborn and persistently undesirable behaviors.

There are a range of mid-size Terriers and Terrier crosses that display a similar robust conformation.

They are alert and engaging, and desire to please their owners—with a degree of strong-mindedness that can be a mixed blessing.

A breed rescue for Pitbulls or Yorkies may have this mix. However, its rarity makes this unlikely.

Many breed specific rescues also carry mixes, so it’s worth getting in touch with the Terrier rescues below:

Is a Pitbull Yorkie Mix Right for Me?

If you would like a Terrier with many of the engaging traits of the Yorkshire Terrier in a more robust frame, this crossbreed works for you.

But it’s very important to make sure that both the parents are friendly.

You must be committed to lots of socialization and positive reinforcement for this to be a good fit.