You are here: Home / Breeds / Mix / Golden Retriever Bulldog Mix: What You Need to Know 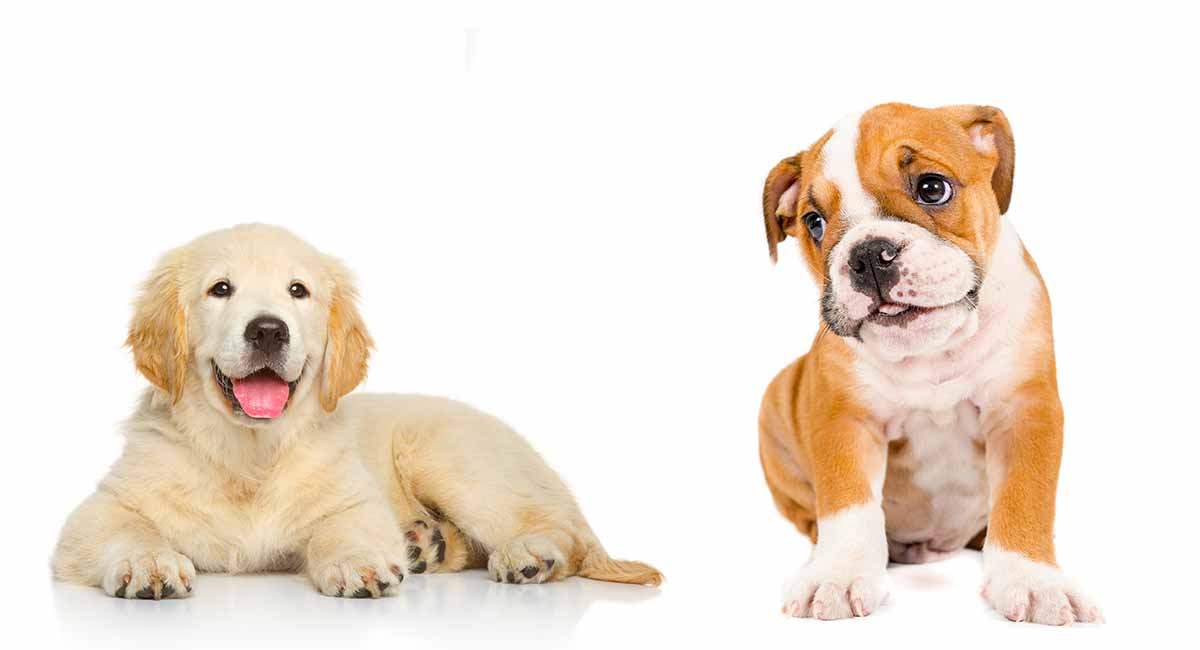 Does the idea of a Golden Retriever Bulldog mix sound like the perfect dog to you?

In this article we’ll take a look at the puppy product of combining the Golden Retriever with the English Bulldog.

Yes, both breeds are adorable and loving canine companions, but what about the mix?

If you’re thinking about the Golden and Bulldog mix as a possible pet, it’s important to know all the facts about this designer dog.

English Bulldogs have some serious health problems that stem from the breed’s physical appearance.

Many animal welfare and dog breed organizations are warning potential owners about these risks.

Can you minimize the health problems of the English Bulldog by crossing it with another breed like the Golden?

We’ll look at the facts, so you can make an informed decision about your next pet.

What is a Mixed Breed Dog?

The Bulldog Retriever mix is what’s known as a designer mixed breed dog.

What’s the difference between a purebred, a mix, and a mutt?

First, a purebred dog is descended from two dogs of the same breed that have a known ancestry, or pedigree.

A mixed breed dog is the offspring of purebred parents of two different breeds.

Finally, mixed breeds differ from mutts because many mutts are born to parents that have unknown ancestries.

Designer mixed breeds are a relatively recent development in the history of dogs.

They were created to combine the best characteristics of two different breeds.

You may have heard of the term hybrid vigor.

This means that when two different breeds are crossed, the resulting genetic diversity will result in healthier offspring.

While hybrid vigor is real, in the case of the Golden Retriever Bulldog mix, the significant health problems of the English Bulldog will play an important role in the health of the cross.

We’ll look at the health issues of the Bulldog in more depth later, but first an overview of the two parent breeds.

The Golden Retriever Bulldog mix (often called the Golden Bulldog for short) is an appealing dog that combines cute looks and a sweet personality—not a surprise given the parent breeds!

The Golden has been a popular and much-loved family dog for many years.

The breed is known for its handsome looks and friendly, cheerful personality.

Originally bred as a gundog in Scotland, the breed’s winning temperament quickly made it a favorite family pet.

The English Bulldog is also known for its appealing temperament.

Loving, calm, and devoted, today’s Bulldog is certainly far removed from its origins as a fighting dog in the now extinct blood sport known as bull-baiting.

The unmistakable appearance of the Bulldog is attractive to many dog lovers but can lead to some serious health issues.

What kind of dog is the Golden Retriever Bulldog mix?

The Golden Retriever is an athletic medium sized dog.

Goldens are known for their dense double coat that comes in that famous golden color.

They are heavy shedders, especially seasonally when they shed their thick undercoat.

They are much shorter than the Golden, with both males and females standing between 14 and 15 inches tall at the shoulder.

The Bulldog coat is short and smooth.

It comes in a wider range of colors than the Golden and can also have patterns and markings.

While the Bulldog’s coat is lower maintenance than the Golden’s, care needs to be taken to keep the skin folds clean and dry.

All mixed breed dogs can inherit the physical characteristics of either parent, in any combination.

Your dog’s appearance can favor one breed over the other.

Or the result can be a mixture of the parents’ characteristics.

Generally, the Golden Retriever Bulldog mix is a medium sized dog that falls within the Golden and Bulldog weight ranges.

Height can vary, given the height differences of the parent breeds.

Many Golden Retriever Bulldog mixes will have somewhat wrinkly skin on the body and face.

Remember that skin wrinkles need to be kept clean and dry.

Coat length can range from short to medium.

Tan colored coats are often seen in this cross.

Your pup may inherit the coat markings of the Bulldog parent.

The mix’s coat may be less maintenance than a purebred Golden’s.

You can still expect to brush your dog a few times a week to keep shedding under control.

As with physical appearance, your dog can also inherit the personality of either parent breed, in any combination.

Both parent breeds have loving and loyal personalities and are known as gentle dogs that do well in families with children.

Because they are obedient and eager to please, Golden Retrievers are known for their trainability.

Bulldogs are also very trainable, thanks to their easygoing temperament and eagerness to please their owners.

What About the Mix?

While the Golden Retriever Bulldog mix is likely to inherit the appealing personality traits of the parent breeds, it’s always a good idea to start training and socializing your puppy from an early age.

Always use positive reinforcement training techniques when working with your dog.

The Golden is more active than the Bulldog, but the mix will need daily moderate exercise, especially if it inherits the Bulldog’s tendency to gain weight.

Speaking of exercise, the head and body structure of the Bulldog makes many activities difficult (and even dangerous) for this breed.

Here’s what you should know.

English Bulldogs suffer from a lack of genetic diversity.

This inbreeding, combined with the extreme physical appearance of the dog, has led to health issues so debilitating that many dog experts warn that the breed cannot survive.

The physical structure of the Bulldog requires breeding interventions such as artificial insemination and C-section births.

The flat muzzle, called brachycephaly, leads to many chronic health problems caused by restricted airflow to the lungs.

The skeletal structure of the Bulldog’s body (called chondrodysplasia) can cause painful joint and spine problems.

The exaggerated skin folds can lead to infections of the skin and eyes.

This is only a partial list of the many health problems of the English Bulldog.

Any potential owner of a Bulldog or Bulldog mix should be aware of the significant commitment of time and money required to properly care for the dog.

You may also want to consider an American Bulldog Retriever mix instead.

While the Golden Retriever does not suffer from the kinds of health problems caused by the Bulldog’s physical conformation and genetics, they do have some inherited health conditions that potential Golden Retriever Bulldog mix owners should know about.

Responsible breeders will screen their Golden breeding stock for these conditions.

You should also be aware of the elevated risk for cancer in the Golden Retriever breed.

Experts say 60% of all Goldens will develop some form of cancer in their lifetime.

The most concerning cancers in Goldens are high-grade mast cell tumors, osteosarcoma, hemangiosarcoma, and lymphoma.

Researchers are conducting ongoing studies of cancer in the breed, including the genetic and environmental risk factors that may be involved.

Your Golden Retriever Bulldog mix can inherit health problems from both parent breeds.

How can you ensure that your puppy is as healthy as possible?

Because the English Bulldog’s health is so compromised, consider choosing another Bulldog breed.

The American Bulldog can be a good choice because the structure of the head and body are less extreme.

An American Bulldog and Golden Retriever mix can be a healthier option when looking for a puppy.

Avoid buying from a pet store or an online advertisement.

As we mentioned earlier, there are tests that can screen for many of the genetic health problems of the Golden Retriever.

Responsible breeders will health test their Goldens and provide clients with the results.

While it’s impossible to predict if a puppy will get cancer later in life, you can ask your breeder about any history of cancer in their Golden breeding stock.

There are also genetic health tests available for the Bulldog.

But remember that if your mixed breed puppy inherits the Bulldog head and body structure, your dog may face some chronic health challenges.

Your dog will depend upon you for a lifetime of care.

Be sure to work with a responsible breeder to ensure that the puppy you choose is healthy.

Beuchat, C. The Myth of Hybrid Vigor in Dogs…is a Myth. The Institute of Canine Biology, 2014.

Health Screenings for the Parents of a Litter. Golden Retriever Club of America.