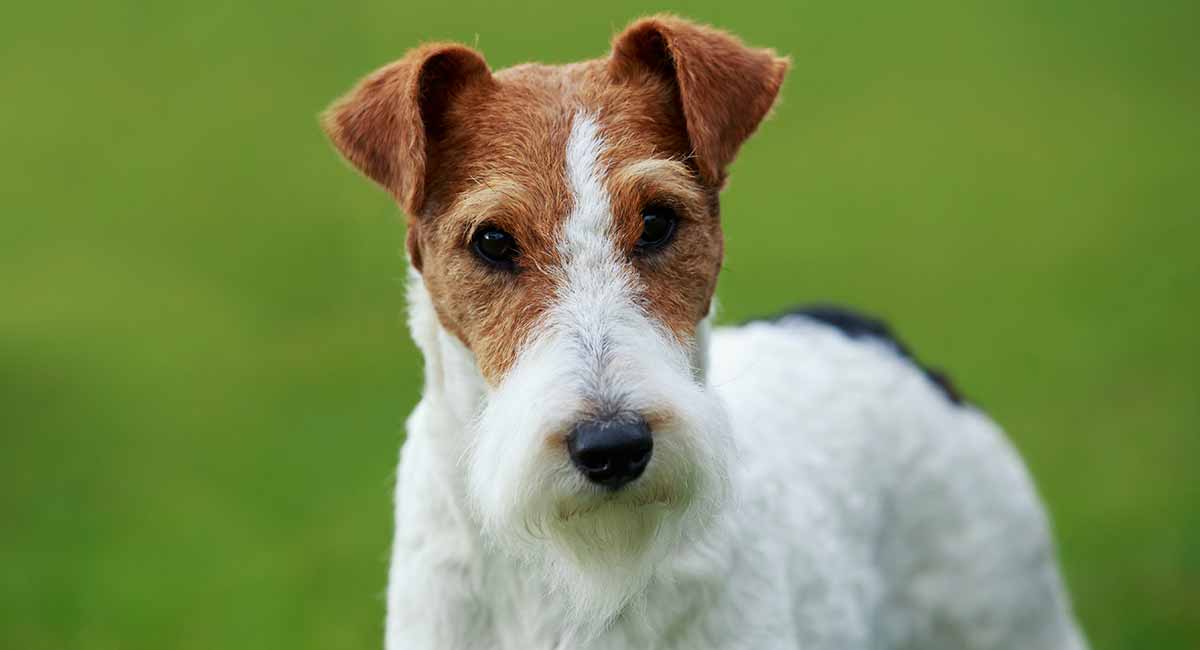 Feisty, friendly, and fearless, the Fox Terrier dog packs a lot of personality into a sturdy little body.

We hope this helpss you decide if a this cute pup is a good match for your family and lifestyle.

During the end of the 19th century, these pups were one of the most popular terrier breeds in the UK.

The Smooth Fox Terrier became one of the most recognizable purebred dog breeds in the 1920s after a dog named Nipper was shown in the iconic RCA Victor Records advertisement.

When a Wire Fox Terrier named Asta appeared in The Thin Man film series in the 1930s, popularity of the breed surged.

Over the years, the prevalence of both breeds has been in decline.

In the US, 2017 statistics show the Wire Head ranking 99th and the Smooth 122nd in breed popularity.

Origins of the Fox Terrier Dog

Fox Terriers were developed to enter fox dens to flush them out.

Not many records were kept, so there are conflicting theories about the development of the breed.

The Smooth Fox Terrier probably descended from black-and-tan terriers with smooth coats, the Bull Terrier, the Beagle, and the Greyhound.

The Wire Fox Terrier was believed to have originated from the rough-coated black-and-tan working terriers of Wales, Durham, and Derbyshire.

For over a century they were deemed one breed of two varieties.

It wasn’t until 1985, when the American Kennel Club approved separate standards, that they were recognized as two distinctive breeds.

Although they are two separate breeds, the Smooth Fox Terrier and Wire Fox Terrier have most of the same physical characteristics.

The main difference is their coat type.

The coat of the Wire Fox Terrier is wiry and dense with a crispy texture.

While the Smooth Fox Terrier has a smooth, short, dense coat that lies flat against the body.

Both breeds are predominantly white, with black, and/or tan markings.

There is also a slight difference in the head, as a Smooth’s head is more V-shaped than the Wire’s.

Other defining physical traits of the Fox Terrier include a flat, tapering skull and ears that neatly fold forward.

What Size Is a Fox Terrier?

Adult Fox Terrier males will stand 15 inches, and the female will be slightly smaller at 12 to 14 inches.

Strong, sturdy, short-backed, and symmetrical, they are small but powerful with well-defined muscles.

However, they have a tendency to be overly vocal, and their high-pitched barking can become a problem.

Fox Terriers are nimble escape artists known for running away if left off leash.

They’ll even climb over or dig under fences to make a getaway.

Both breeds are similar in temperament, but the Wire Fox Terrier temperament can be a bit more forceful and intense.

How Much Exercise Does My Fox Terrier Need?

Exercise, exercise, and more exercise is essential for keeping this active and easily bored breed from misbehaving.

At least 30 to 45 minutes of vigorous one-on-one exercise is required for burning off their abundance of natural energy.

They love being outdoors, and this highly intelligent breed never tires of chasing balls and playing all types of games.

Friendly, lively, and athletic—the more exercise they get, the happier and less destructive they’ll be.

Ideal Home for a Fox Terrier

Pups should have a big yard so they can run around.

But their tendency to dig and bark means they shouldn’t be left alone outside for long.

Although this breed loves playing with older kids, they are too actively aggressive for young children.

Little ones running around can incite their tendency to give chase.

Also, these dogs will not take kindly to being teased or having their ears pulled.

They may be fine with other dogs or cats if they’ve been around them from the time they’re puppies.

However, they should not be in a home where there are small pets like hamsters, guinea pigs, or rabbits.

These energetic and outgoing breeds are best suited for active families with children over the age of 8.

A tendency to be wilful can make them difficult to train for first time dog owners.

They will respond well to consistency and routine.

Clear rules need to be imposed in a positive way.

They are highly intelligent, and once properly motivated, they are extremely quick learners.

Grooming and Care of Your Fox Terrier

The short hair of the Smooth Coat Fox Terrier needs only to be brushed occasionally with a firm bristle brush to keep him looking neat and trim.

To get the coat texture the breed is known for requires something called hand-stripping.

This process of removing dead hair should be done by a groomer once or twice a year.

There is some debate about hand-stripping, and you can choose to have them clipped and trimmed every few months if this is not a show dog.

Neither of the breeds shed very much.

Is the Toy Fox Terrier Right for You?

The miniature Fox Terrier is an American breed.

They are the result of crossing a Fox Terrier with toy breeds like the Miniature Pinscher, Italian Greyhound, and Chihuahua.

Although still spunky, well-built, and energetic for their size, the Toy has a quieter demeanor, is easier to train, and loves to cuddle.

If you’re interested in the breed but feel they might be too much of a handful, the mini is more kid-friendly and suitable for apartment living.

Like all of the terrier breeds, chronic allergies, which cause itching and can lead to infection, are common.

Congenital deafness is a common disorder found in Fox Terriers, as is patellar luxation, which occurs when the kneecap is dislocated.

Degenerative myelopathy is a devastating inherited neurologic disease of dogs, similar to ALS or Lou Gehrig’s disease in people.

It causes poor nerve function, and the dog will become increasingly weak in the hind legs, eventually leading to paralysis.

Characterized by the dislocation of the lens in the eye, caused by the breakage of the ligaments that hold the lens in place, it is painful and leads to blindness.

Glaucoma and cataracts are other eye diseases found in Fox Terriers.

Cataracts can cause blindness and may appear in dogs younger than 3 years old.

How Long Do Fox Terriers Live?

Should I Get a Fox Terrier Puppy?

Since they are one of the rarer breeds, it may take some time to track down a good breeder.

A reputable breeder will have health clearances for both of the Fox Terrier puppies’ parents.

Showing they’ve been tested for known issues that impact the breed.

In particular, Fox Terrier pups should have health clearances certifying that the eyes are normal.

Look for a breeder who doesn’t breed dogs until they’re two or three years old.

Some health problems don’t appear until the dog has reached full maturity.

It’s easy to be enticed by the charming antics of the Fox Terrier, but this breed is not right for every family.

If you have small children and other pets or want a dog who will enjoy being a couch potato with you, you’re looking at the wrong breed.

If you have an active lifestyle and are looking for a breed that can keep up with you—and then some—the Fox Terrier dog will be a good fit.

Let us know in the comments below what you enjoy about the feisty Fox Terrier!