You are here: Home / Breeds / Corgi Bulldog Mix – The Truth About This Curious Combination 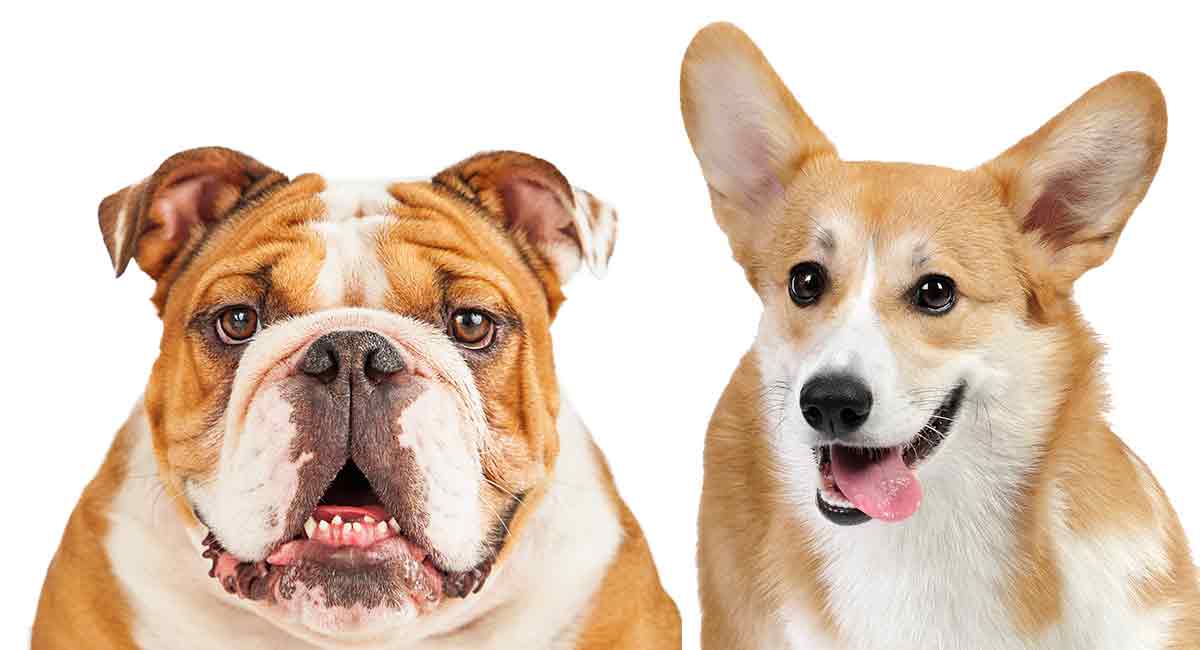 The Corgi Bulldog mix is a truly unique breed.

With the tiny legs of a Corgi and the traits of a Bulldog, many of this hybrid turn out looking like mini-versions of their purebred Bulldog ancestors.

But there is more to this hybrid than it might first appear.

Where Does the Corgi Bulldog Mix Come From?

The Corgi originated in Wales in the 1100s.

The exact ancestry of the Corgi is a mystery, but it was probably the result of countless crossbreeds.

The Corgi was originally a herding-type dog.

But it was also used as a watchdog and guard dog.

Today though, the breed is mostly used for companionship purposes.

The Bulldog, on the other hand, was bred to fight bulls.

Their unique body shape gave them a clear advantage over other dogs in the arena.

Though they were initially very aggressive, they were bred to be gentler after bull baiting was banned in 1835.

There is some controversy around creating crossbred dogs.

Some claim that crossbreeding lowers breeding standards and the quality of the dog.

But, in most cases, this is not so.

Unless a registration is crucial to you, there is no reason you shouldn’t get a mixed breed dog.

Mixed breed dogs are commonly healthier than their purebred counterparts.

Many breeds were initially created from only a few individuals.

This leads to genetic disorders.

On the other hand, hybrid dogs are created from a larger gene pool.

This prevents them from inheriting genetic disorders that are common in purebred dogs.

Because they are a hybrid, these dogs can differ widely in appearance.

It is just a flip of the coin.

These dogs will likely be between 22-53 pounds.

Their height will be between 10-16 inches.

Both their height and weight will depend a lot on whether or not the particular dog inherits the dwarfism gene from their Corgi parent.

All Corgis have a particular dwarfism gene called achondroplastic dwarfism.

This dwarfism gene controls the growth of certain parts of your body during development, particularly your legs.

This is why Corgi’s have incredibly short legs.

Because this gene is dominant, you only have to inherit one for it to affect you.

This means that this mixed breed dog has about a 50% chance of being short and stubby like a Corgi.

But this mixed breed will never be quite as short as a Corgi since they will only ever inherit one gene.

Since most Corgis have two of these dwarfism genes, they are particularly affected.

Depending on the exact trait inherited, this dog could have short rough hair or medium-length, softer hair.

While these dogs can come in a wide variety of colors, fawn and white are going to be by far the most common.

Like most mixed breeds, the temperament of this dog depends on what genes they inherit from what parents.

Corgi’s were once herding dogs, but most Corgis that were bred from companionship do not have powerful herding instincts.

However, Corgis bred for herding will have stronger herding instincts.

These Corgis will be significantly more aggressive than companion bred Corgis.

Bulldogs were once bred to be aggressive, but they are now very gentle dogs.

The Bulldog is a naturally independent breed, but this also means that they can be stubborn.

The Bulldog is also not one of the most energetic breeds.

They enjoy more of a laidback relaxing evening over long hikes.

Both of these breeds love people, but the Corgi can be particularly attached to their family members.

They make excellent guard dogs, but can be aggressive around strangers if not properly trained.

They are also not particularly good with children.

Their herding instincts can cause them to attempt to “herd” children, which can result in nipping.

This breed is brilliant and trainable.

Their working breed cooperative nature coupled with their intelligence allows them to pick up on commands and training very quickly.

These dogs can be somewhat stubborn, so incorporating these regimens into everyday life is important.

Early socialization with other people, in particular, is critical.

The Corgi must be taught to get along with strangers.

So, it is likely that this mixed breed will also be suspicious of new people.

The Corgi is a dog with high exercise needs, but the Bulldog is more laidback.

This mixed breed can be anywhere in between.

So, we recommend preparing for lots of exercise, but also understand that this might not necessarily be the case with your particular dog.

The Bulldog does have brachycephaly.

This means that their short snouts can make them have trouble breathing.

Because of this, training and exercise sessions should be short and sweet.

You should also carefully watch this dog around water.

The Bulldog’s body shape makes swimming very difficult. This is not a dog to take with you to a day on the lake.

Dogs who inherit the dwarfism gene will also be prone to back problems, which we will discuss in detail in the next section.

Do not encourage these dogs to jump or climb during training.

Depending on which traits are inherited, this breed can either be very healthy or very unhealthy.

Both the Corgi and the Bulldog suffer from conformational defects.

In other words, humans have bred these dogs to exhibit traits that aren’t necessarily healthy.

The Corgi’s short legs cause it to suffer from back problems, particularly Intervertebral Disc Disease.

IDD causes dogs to lose the ability to walk or control their bladder. In severe cases, pain sensation can also be lost.

While recovery is possible, this disorder tends to progress rather quickly. Once pain sensation is lost, the prognosis is poor.

And there is more…

But this disorder usually does not strike until old age.

On the other hand, Bulldogs tend to suffer from health problems due to their shortened snouts and extra skin.

As we previously discussed, Bulldogs suffer from Brachycephalic Syndrome.

This makes breathing difficult, makes exercise nearly impossible, and can even cause the dog to collapse.

This mixed breed can suffer from all or none of these health effects depending on what traits it inherits.

But it’s more than likely to have some serious health problems.

The Corgi Bulldog mix can make a good pet for a family without small children if they are appropriately trained.

This breed will likely not get along with strangers at the onset, but early socialization can curb this problem.

However, you also need to take their likely poor health into account.

Because of their health problems, rescuing an adult Corgi Bulldog mix is the safest way to go.

We recommend staying away from dogs that have short, stubby legs.

These dogs will likely suffer from back problems that can be very serious.

This dog might take a little longer than usual to warm up to you and your family.

They are usually not very comfortable around those they do not know very well.

If you’re set on getting a puppy Corgi Bulldog mix, there are many things you should look out for.

You should also stay away from dogs that have shorter than average legs as well as those with very flattened faces.

The more proportional the body, the less likely the dog is to suffer from back problems.

And, the more of a snout the dog has, the more likely they are to be able to breathe correctly.

Ask the breeder if you can meet the puppy’s parents and see where they are staying.

In particular, interacting with the Corgi parent is essential.

Much of the Corgi’s herding and aggressive tendencies are genetic.

So, it is critical to ensure that the Corgi parent is not aggressive.

For other helpful tips, you should see our puppy search guide.

Early socialization is vital for this mixed breed.

You should introduce them to a variety of people of all ages.

You should also be sure to begin with the correct toys, bedding, and food in your home.

This will help your dog stay healthy and happy.

We also recommend that you take a look at our variety of puppy care articles to ensure that you get started on the right foot.

As we stated, beginning with the correct food and toys is essential to caring for your puppy.

Without the necessary supplies, keeping your puppy healthy and happy will be difficult.

We recommend taking a look at our French Bulldog harness article.

While not all the information will pertain to this mixed breed, it will explain why you need a harness and help you pick out a suitable one.

You can also check out our food guide for English Bulldogs, which will give you some idea of what food to purchase for your canine.

Pros and Cons of Getting a Corgi Bulldog Mix

On the one hand, it is possible for these dogs to be unhealthy if they inherit specific genes from their parents.

They are also wary of strangers and can have a herding instinct, which makes them unable to be around children.

However, these dogs are also brilliant and committed to their family members, making training easy.

Some might be even able to be trained as guard dogs.

While you can get a healthy Corgi Bulldog mix, this can be difficult. Instead, you might want to consider some alternatives.

We suggest looking at other herding dogs.

Something like the Alapaha Blue Blood Bulldog is a good choice if you love Bulldogs.

These dogs will act like a Corgi, but many are healthier.

Is a Corgi Bulldog Right for Me?

These dogs can make great pets in terms of personality, but sadly we feel the health risks are too high with this mix.

What are your thoughts about the Corgi Bulldog Mix? Let us know in the comments below!