You are here: Home / Breeds / Mix / Havachon – The Havanese and Bichon Frise Mix 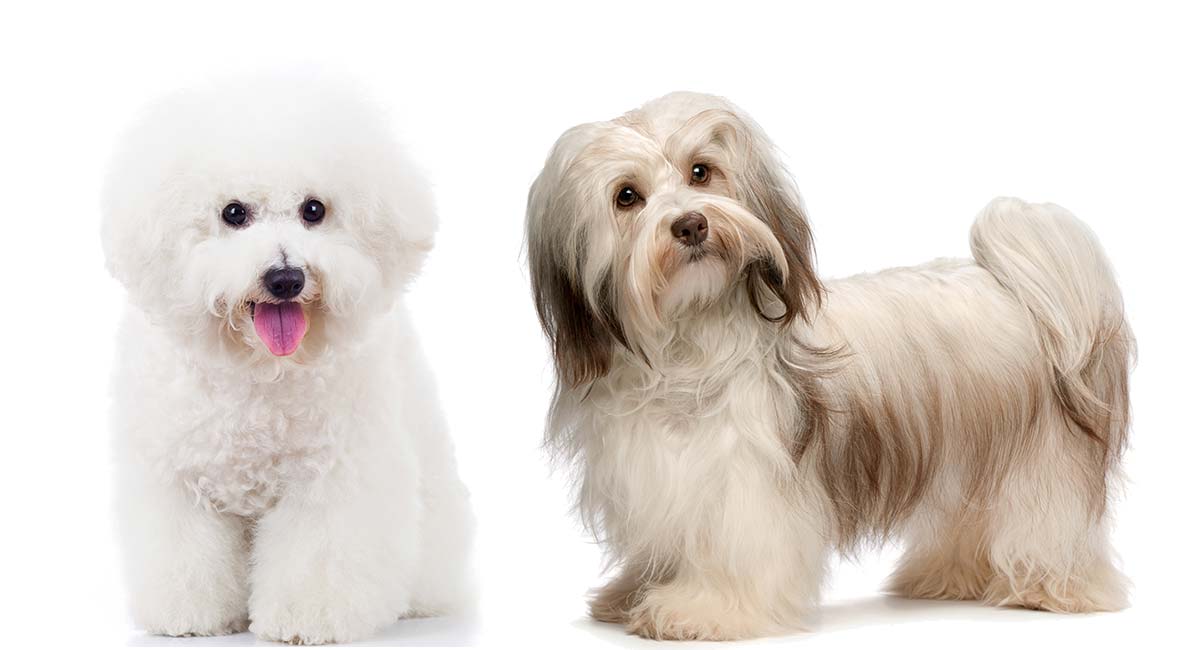 Are you hankering for a Havachon?

Have you fallen for this adorable hybrid hound?

Welcome to our complete guide to the Havanese Bichon cross.

In this article, we will learn all about this delightful designer dog.

And help you to decide if you’re ready to give a Havachon a home.

But before we delve into the world of the Bichon Frise Havanese mix, let’s learn more about so-called designer dogs.

A designer dog is the term used when breeding from two different types of pedigree parents.

Also known as a first generation mix or hybrid, crossbreeds are extremely popular these days.

Bred this way on purpose from selected doggie parents, designer dogs are unlike mutts or mongrels, whose origins could be from several breeds.

There are conflicting opinions on whether cross breeding is a good idea, and views are very firmly held.

Supporters of crossbreeding claim that the offspring of specifically chosen purebred pups will be far healthier than their parents.

This argument, known as hybrid vigor, supports the idea that the gene pools of purebred dogs have become so small that inherited health problems are rife.

I think it’s fair to say that we are all aware that certain pure breeds can suffer from poor health.

Opponents, on the other hand, firmly believe that the pure line of pedigrees must be maintained.

Also, as they come from two different breeds, their temperament is unpredictable.

At the end of the day, it’s really up to the individual to decide for themselves how they feel about crossbreeding.

It is true though that any dog of any kind could take more after either one of its parents.

Or the offspring can be a blend of both parents.

With that thought in mind, let’s now look at the Bichon Frise and Havanese individually and then together.

Where Does the Havanese Come From?

This delightful little pup is the national dog of Cuba and has a rich and interesting history.

He is thought to have been brought across the seas from the Spanish island of Tenerife by Cuba’s first settlers.

The only native breed from the country, this Cuban cutie was a popular lapdog of the aristocracy.

At the time of Fidel Castro’s coup, fleeing Cubans took eleven of these little dogs with them to America.

Here, the Havanese were preserved and then florished, and are now sought after across the world.

What About the Bichon Frise?

Also from Tenerife, the Bichon Frise is thought to have been a companion dog to Spanish, and later Italian, sailors.

Originally known as the Bichon Tenerife, this little white wonder spread across Europe, favored by royal courtiers of Spain, France, and Italy.

Their pampered position didn’t last, however, and during the French Revolution, they were turfed out onto the street, becoming nothing more than doggie urchins.

Bright and resourceful, the Bichon’s infectious and entertaining nature shone through and many turned into performing circus dogs.

Their luck changed after the two world wars, when a group of European fanciers took them under their wing.

Soon, the plucky Bichon Frise was in vogue once again.

The Origins of the Havachon

Like the majority of hybrid dogs, the exact ancestry of the Bichon Havanese is unknown.

We do know that both parent breeds come from the ancient Barbichon group.

This included the Havanese, the Bolognese, the Maltese, and the Bichon Tenerife, which later became the Bichon Frise due to its curly coat.

We can also safely say that a Bichon Havanese puppy will be unbearably cute.

Size and Weight of the Adult Havachon Dog

Classed as a toy dog, the Havanese typically stands at 8.5 to 11.5 inches.

Weight-wise, you can expect him to be between 7 and 13 pounds.

Similar in height, the Bichon is usually measured at around 9.5 to 11.5 inches at the withers.

This hound is a fair bit heavier though, weighing in at 12 to 18 pounds.

The Havachon size, therefore, is likely to be anywhere within these ranges, but could be at either end of the scales.

Remember that, as he is a crossbreed, a Havachon adult could take after either of his parents.

The Havanese is known for its long, silky coat which can be seen in a myriad of colors and patterns.

He has beautiful brown eyes which sparkle with inquisitiveness.

His pleasing plumed tail is arched and carried over his back.

The lush powder-puff coat of the Bichon Frise is glowingly white with the occasional cream or apricot tinge.

The Bichon’s tail curves cheerfully over the back.

A Havanese and Bichon mix could be a combination of both, or take after one parent more than the other.

Each of the Havachon’s parent breeds is a chirpy chappie with clown-like tendencies.

It stands to reason then that a Havachon will be playful, curious, and alert, making him an excellent watchdog.

These merry little monkeys are affectionate too and enjoy nothing more than whiling away the hours with their human housemates.

If it’s a loving lapdog that you seek, the Havachon definitely fits the bill.

Grooming and Caring for Your Havanese Bichon Mix

As the Havachon can take on the appearance of either of his parents, it’s impossible to predict whether the coat will be long or short-to-medium in length.

One thing for sure though is that your pooch will need to be brushed regularly.

Three times every week is ideal to keep on top of knots.

Bear in mind that it is very likely that the coat of your Havachon will need trimming by a professional groomer every 6 weeks or so.

The Bichon Frise, in particular, is known to suffer from early tooth loss, so it’s wise to get your Havachon used to regular brushing as soon as you can.

As with any dog, ears and claws should be inspected from time to time to prevent problems in these areas.

Possible Health Issues of the Bichon Frise and Havanese Mix

Both of these breeds are generally pretty healthy with long lifespans of 14 years, often several more.

There are some health conditions to be aware of though, including eye problems, hip dysplasia, patella luxation, and congenital deafness.

Fortunately, health testing is available for the majority of issues.

Exercising and Training the Havachon

He can take on agility, flyball, and obedience training, all with ease.

These little characters are highly intelligent and so should be easy to train.

Reward-based training is best to build trust and to form that special bond.

With patience, he can even to be taught to perform tricks on command.

Watch out though, because Havachons can be stubborn little fellas.

Overindulged pups can also develop bad habits, and you may find that he’s actually training you.

A Home for a Havachon

This jolly little dude is great with sensible kids, who know how to be respectful around dogs and other animals.

The Havachon’s small stature should be taken into account if there are small children in the family.

Havachon dogs are sociable souls and long to mingle with their human family at all times.

This “Velcro dog” tendency does mean that he doesn’t like to be left alone for long periods.

His potential to suffer from separation anxiety means that a work-at-home household is ideal.

Whether you dwell in an apartment in the city or at a country retreat, any abode is suitable for this adaptable pup.

As long as you are there, too, your Havachon will be happy.

Where Can I Find Havanese Bichon Mix Puppies?

As this mix is still relatively rare, Havachon breeders can be hard to find.

Therefore, you may well have to wait for a puppy of your own.

Havachon puppies are so unbelievably adorable, though, that it will certainly be worth it.

Breeder recommendations are always the best way to go, but the internet has a wealth of information to offer.

It’s imperative that you find a reputable breeder as, sadly, puppy mills are very real.

Make sure that you meet the mother of a prospective Havachon puppy, at the very least.

Always ensure that the breeder provides paperwork to show that both parents have been health checked.

If a breeder is unwilling to provide this or if you are unhappy with anything at all, be strong and walk away.

Don’t forget to consider a Havachon rescue to give a home to a dog in need.

We do hope that the Havachon information above will help you to make up your mind.

Will you introduce Bichon Frise Havanese mix puppies into your life?

Tell us your tales in the comments below.

The Havanese Club of America

The Bichon Frise Club of America