You are here: Home / Breeds / Pitbull Basset Hound Mix – What To Expect From This Unusual Mix 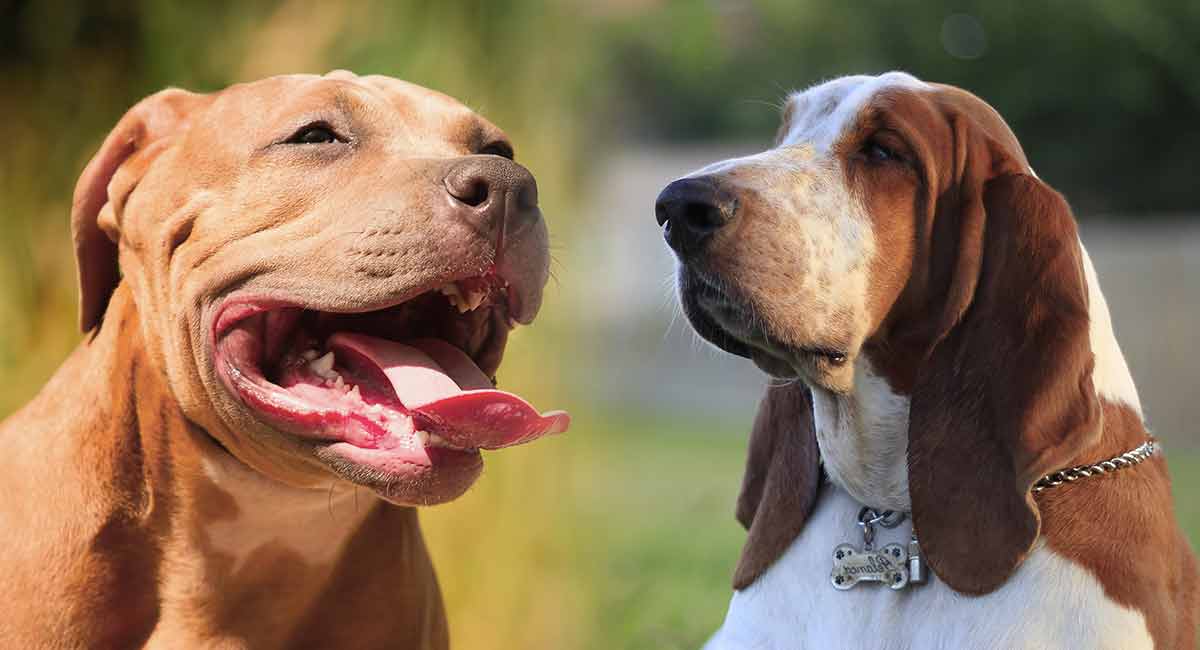 When you see these two dogs side-by-side, it’s apparent that there’s very little physical similarity between them. But, appearance is only part of the equation.

So what happens when you cross the energetic American Pitbull Terrier with the low-key Basset Hound?

Where Does the Pitbull Basset Hound Mix come From?

The popularity of unique mixed breeds like the Pitbull Basset Hound mix is on the rise.

This is in part due to the sense of exclusivity they offer dog owners.

Crossbreeding is actually an ancient practice. Nearly every purebred dog breed was refined through generations of crossbreeding.

The difference is that today’s mixed breeds, or “designer dogs,” as they’re often referred to, are first-generation crossbreeds.

Advocates of this practice argue that these dogs are less likely to inherit genetic disorders because they are bred from a much larger gene pool.

However, when it comes to the physical and temperamental traits of designer dogs, they’re not predictable.

Looking at the history of both parent breeds is a good way to gain a better understanding of what to expect from the Pitbull Basset Hound mix.

Pitbull breeds originated in England for the purpose of fighting staked bulls or bears.

When this blood sport was banned, they were used for killing rats in a pit. This is where their name is derived from.

These dogs were bred from the Old English Bulldog and Terrier breeds.

In the mid-1800s they made their way to the U.S. where American breeders developed a larger version than the English dog.

This breed was named the American Pitbull Terrier by the United Kennel Club.

However, they were renamed the American Staffordshire Terrier by the American Kennel Club. This was to distance them from their violent past, which unfortunately still haunts them today.

The Basset Hound originated in France and Belgium.

It’s believed they were developed by the friars of the Abbey of St. Hubert who wanted a new strain of scent hound similar to the Bloodhound.

These low-slung dogs were able to trudge across rough terrain and drive small prey from thick undercover into the open as hunters followed on foot.

Their long, floppy ears helped to sweep the scent of quarry towards their nose.

There have been two American reality TV shows that feature Pitbulls: Pit Bulls and Parolees and Pit Boss.

The Basset Hound is second only to the Bloodhound when it comes to a keen sense of smell.

The name Basset comes from the French word “bas,” which translates to low, which they are in stature.

Other than the fact that both dogs have a short coat and a compact body, the Pitbull and the Basset Hound look nothing alike.

Whenever you mix two different purebred dogs they can take after one parent entirely or be a unique combination of both.

We’ll look at each breed individually to see what physical traits the Pitbull Basset Hound mix could potentially inherit.

With his muscular physique, the Pitbull’s powerful strength is visible. However, this dog is also very agile and sports a bouncy gait.

The head is large and wedge-shaped with a wide muzzle and strong jaw. While their coat is short, stiff, glossy, and comes in a multitude of colors and patterns.

Although they stand no more than 15 inches, the heavy-boned Basset Hound weighs between 40 and 65 pounds.

With their powerful, short legs and massive paws, this dog was built for strength and stamina rather than speed.

Without a doubt, the Basset Hound has one of dogdom’s truly iconic faces. Their long, large head is framed by even longer ears that are velvety to the touch.

But perhaps their most defining features are their soulful eyes and wrinkled brow, which give them a permanently mournful expression.

Coats always have at least two colors but are often found in the classic tri-color mix of black, white, and tan.

As with appearance, when you combine two such different breeds, temperament is questionable.

There’s probably no dog that stirs more controversy than the Pitbull.

They’ve been banned throughout England and Wales since 1991 and they almost always seem to top the lists of breeds involved in attacks.

However, this study found them to be no more aggressive than many other breeds.

When Pitbulls have been known to show aggression it’s usually towards other dogs.

The truth is that many Pitbulls are raised by people who want a vicious guard or attack dog and encourage these tendencies in them.

There are plenty of Pitbull owners who will tell you their dogs are good-natured, lovable, and extremely affectionate.

The reality is that any dog can potentially become aggressive which is why early socialization is so important.

Patient, tolerant, gentle, friendly, calm, easygoing, and comical are ways to describe the Basset Hound. That is until they catch an interesting scent.

When these highly attuned scent hounds are on the trail they can be tenacious and stubborn.

Despite having a prey drive, Basset Hounds are usually fine with other pets as long as they’ve been well-socialized and properly trained from an early age.

However, since they once hunted in packs, they also get along with other dogs.

Training your Pitbull Basset Hound mix could be somewhat of a challenge.

Although both parents are intelligent, they’re also known for having a stubborn streak. The Basset Hound, in particular, can be independent.

This is largely due to their history as a scent hound who was developed to hunt on their own without distraction.

For this reason, they may not be inclined to follow commands.

Patience, consistency, and positive reinforcement training methods using treats will get you the best results.

Basset Hounds are also known to be hard to housebreak.

Crate training may be the way to go since puppies naturally don’t want to go to the bathroom where they sleep.

Early socialization is important for any breed, but when they are strong and have a history of aggression with other dogs, it’s vital.

When it comes to physical activity requirements, these two breeds are quite different.

The amount of exercise your Pitbull Basset Hound mix requires will depend upon the individual dog.

Basset Hounds are not very active and a daily walk at a moderate pace is usually all they need.

On the other hand, the Pitbull is very energetic and requires an exhaustive workout to avoid destructive chewing.

Although mixed breeds are often touted as being healthier than purebred dogs, they are still at risk for inherited health conditions that affect either parent.

It’s important to choose a breeder who has health tested their breeding stock, especially for conditions they share.

Hip dysplasia is an inherited condition where the hip socket is abnormally formed that affects both dogs.

Pitbulls are generally healthy, with a lifespan of 12 to 16 years.

However, they are at risk for cardiac disease, skin and coat allergies, and a brain disorder which affects muscle coordination called cerebellar ataxia.

The Basset Hound has a lifespan of 12 to 13 years but is at risk for a number of health issues.

Some are due to having osteochondrodysplasia. This condition causes the skeleton to develop abnormally and is why they have such shortened legs.

This study found the Basset Hound to be one of the breeds most affected by their conformation.

If they have long, droopy ears they’ll need to be checked for infection. Their diet should be appropriate for their age and weight.

Since both dogs are prone to becoming overweight, avoid overfeeding, including treats.

As long as they’re properly socialized the Pitbull Basset Hound would make an excellent addition to any family.

The main issue would be if there are other dogs in the home as the Pitbull can sometimes pose a threat to other animals.

Rescuing a dog gets rid of some of the guesswork.

You’ll know exactly what he looks like and how he interacts with people.

Best of all, giving a dog a new, happy home is a feeling you just can’t buy.

Although mixed breeds are very popular, the Pitbull Basset Hound mix is a fairly rare cross and you may need to search to find the puppy you want.

A good breeder is always the best place to find a puppy as they will have health screened litters and provide health certifications.

You should be able to see the parents, littermates, and where they were raised.

Choosing a puppy with longer legs should reduce the risks of conformational problems.

Pet stores are to be avoided as their puppies are almost always supplied by puppy mills. These pups often have a higher rate of health and behavioral problems.

Our puppy care and training guides are excellent resources, giving you all the information you need to raise your new Pitbull Basset Hound mix puppy.

Pitbulls are very playful, love to chew, and can be really hard on their playthings.

These toys designed for Pitbulls are built to withstand their awesome jaw strength and keep an energetic dog entertained.

Floppy ears are more prone to getting dirty and staying wet longer which can lead to infection.

Properly using a good ear cleaner will eliminate this problem.

Pros and Cons of Getting a Pitbull Basset Hound Mix

If you’re still undecided, here are some other Basset Hound and Pitbull mixes to consider:

Rescue shelters that specialize in specific mixed breeds are rare.

However, you may be able to locate one through these rescues for Pitbulls and Basset Hounds.

If you know of other rescues that specialize in these breeds, please add them in the comments below.

Is a Pitbull Basset Hound Mix right for Me?

As long as you have no other pets and are able to spend plenty of time socializing and training, the Pitbull Basset Hound mix would make a great companion.

They’ll be a people-lover who wants to be a part of the family.

Before you make a commitment, make sure you’re able to provide this dog with the love and attention they need and deserve.

MacNeil-Allcock A, et al., “Aggression, behavior, and animal care among pit bulls and other dogs adopted from an animal shelter,” Universities Federation for Animal Welfare, 2011