You are here: Home / Breeds / Mix / Weimaraner Lab Mix – Your Guide To The Labmaraner 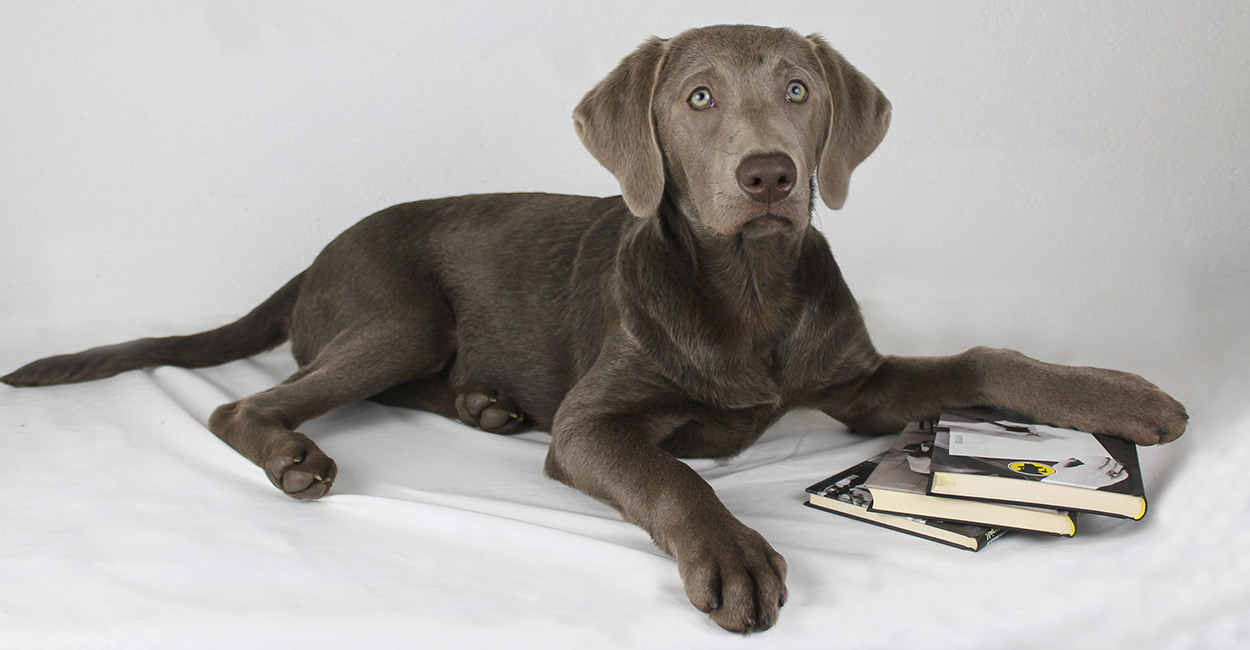 Are you wondering if a Weimaraner Lab mix puppy is right for you?

Welcome to our complete guide to the Weimaraner Lab mix!

We’ll give you all the information so you can decide for yourself if this cross breed could steal your heart!

One of the newer hybrid dogs available today is the Weimaraner Labrador mix. The loyal and affectionate nature of the Lab, mixed with the grace and intelligence of the Weimaraner, can make a friendly combination that your family adores!

It’s no surprise that these two popular breeds have been combined, in hopes of creating an even better dog.

However, this combination is a first-generation mix, which means you may encounter some controversy surrounding this mixed breed.

So, let’s start off by investigating the difference between purebred and designer dogs.

As you know, purebred dogs often come with pedigrees and long bloodlines.

Designer dogs, like the Weimaraner Lab Mix, are crosses between two purebred dogs.

Some will tell you that makes a designer dog basically a “mutt,” even if the designer dog’s parents are purebred dogs with pedigrees.

Many people who breed purebred dogs say that keeping dog breeds pure is a good thing. That’s because breeding dogs to a particular standard keeps its qualities and attributes predictable.

If breeding produces a dog with good health and personality traits, breeders can tell you exactly where the genes come from. They can then reduce the risk of inherited problems, such as diseases.

But breeding of animals that are similar genetically can lead to problems, too. If a dog breed is prone to certain inherited problems, these problems can be magnified in the next generation of purebreds.

Responsible breeders take care to use pedigree information to introduce diversity into the breed’s gene pool.

On the other hand, advocates of mixed breeds will tell you that crossing breeds results in healthier dogs, because you’re introducing genetic diversity.

We have addressed the issue in more depth in this article.

We should note, however, that many of the breeds we consider purebred today were once mixed breeds. Additionally, many of our pure breeds today may not survive into the future without some hybridization.

If you’d like to delve more into the science of crossing genetic subpopulations and how it might affect dogs, visit this article.

There’s one thing we know, though – we should be most concerned about the welfare of individual dogs, whether they are mixed breeds or from pedigreed lines.

As with many of the 500+ species of designer dog, the history of the Weimaraner Lab mix can’t be easily traced.

We have no idea if they were created on purpose or by accident. We do know that they are one of the rarer, newer forms of Lab mix.

Some people call them “Labmaraners.”

Origins of the Weimaraner

As far as breeds go, the Weimaraner is fairly young, dating back to early 19th century Germany. It is believed to be a descendant of the bloodhound.

Dogs were bred in Germany to produce good hunting stock, such as the German Shorthair Pointer, and the Weimaraner may have come from this.

Originally, they were bred as big-game dogs, but shifting hunting priorities turned the breed into a sought-after bird dog.

In early days, the Weimaraner was called the Weimar Pointer, after the court that sponsored the breed.

The Weimaraner was brought to the U.S. by a man named Howard Knight in the 1920s.

The American Kennel Club granted the Weimaraner recognition in 1943.

Weimaraners are known for their intelligence, speed, fearlessness, obedience, endurance, friendliness, and courage.

They come in three colors – blue, gray, and silver gray. They have a graceful body and finely-balanced, aristocratic features.

Origins of the Labrador

Labrador Retrievers originally come from Newfoundland, where small water dogs pulled in nets and traps full of fish for their owners.

These dogs were bred with larger Newfoundland dogs to create the St. John’s Water Dog.

This dog is considered the Lab’s main ancestor.

In the 19th century, the Earl of Malmesbury reportedly imported one of these dogs to England.

His family bred them to be hunters, and gave them their name.

The English Kennel Club recognized Labradors as a breed in 1903. The American Kennel Club followed suit in 1917. Today, they’re America’s most popular dog.

Labs are known for their friendly and outgoing nature.

They are eager to please, active, and high-spirited.

These athletic dogs have a good sense of smell, a thick tail, and short and dense coats.

They come in three colors – black, chocolate, and yellow.

But, there is a rare color variation of Labradors called silver. Silver Labs are, in essence, chocolate Labs with a “diluted” color gene.

Some people believe that the silver color of these Labradors came by crossing Labradors with Weimaraners, but this theory remains unproven; there are a number of ways Silver Labs may have gotten their color.

For a complete rundown of Silver Labs and the controversy surrounding them, visit our article on the topic.

First, you should know that a Weimaraner crossed with a Labrador will have qualities of both breeds, but it isn’t easy to predict which ones.

You simply can’t tell in advance which parent a Labrador Weimaraner mix will favor.

This is true for all hybrid dogs.

But at least knowing about the parents can give you a hint of what the puppy will be like!

Size, Height, and Weight of a Weimaraner x Labrador

Labradors tend to be between 21.5-24.5 inches tall (male dogs fall on the taller side).

Weimaraners are just a bit taller and heavier. They can be as tall as 27 inches as an adult; females can be as small as 23 inches.

Whether your Lab Weimaraner pup takes after mom or dad, you’re going to have a big dog on your hands!

Although it’s hard to know exactly what you’re going to get from the combination of a Lab and a Weimaraner, this cross generally produces dogs with a short, flat coat and floppy ears.

Their coats can be gray or silver, too!

Basically, your Weimaraner cross Lab can have any of the attributes of both breeds.

Temperament and Behavior of the Weimaraner Lab Mix

Both types of dog barks when necessary, so expect an occasional barker.

Also, both breeds are active and need exercise to get their energy out.

They are easily trained, but must have some stimulation.

Fortunately, they’re definitely eager to please, so your mixed breed dog will be easy to train, good with children, and good with dogs (under supervision).

Weimaraner Lab mix puppies could be high-spirited, like a Lab, or a great runner with plenty of stamina, like a Weimaraner. Most likely, a mix will be friendly and sweet.

Still, you should remember that your Weimaraner and Labrador mix can show traits of either parent.

Grooming and General Care of Your Weimaraner and Lab Mix

Neither of these dogs have long coats, so their hair will not require high-maintenance grooming care.

Labradors have a double coat that will shed seasonally, so they do need regular grooming.

Weimaraners have a short coat that doesn’t need much grooming, other than a weekly soft brushing and perhaps the occasional bath.

Both breeds do need their nails trimmed and ears checked to avoid infection. Their teeth should also be brushed.

Health Issues of Labradors and Weimaraners

A Labmaraner dog may be a mix, but that doesn’t necessarily mean it will avoid the health issues the parent breeds may experience.

Some research shows that mixed breeds can be healthier, but this is a general finding.

If you get a mixed breed dog, you should make sure you know the health history of both the pup’s parents.

You should also make sure the dog is tested for health issues seen in Labradors and Weimaraners. Here are some things you should watch for.

Labs are generally a healthy breed. But they are genetically prone to obesity, vision problems, and certain types of cancers.

They are also prone to hip and elbow dysplasia, which are developmental abnormalities in the joints. Large-breed dogs often suffer from these.

When you have your dog’s health screening done, you should make sure to check if hip or elbow dysplasia may be a problem.

Both Labs and Weimaraners are larger dogs, so they could both have this in their genetic makeup.

Weimaraners, too, are a generally healthy breed.

But they are also genetically prone to certain conditions, including hip and elbow dysplasia.

As you can see, some of these conditions are similar to what the Labrador Retriever has, which makes it possible that your hybrid will inherit health problems.

You can avoid some of the pitfalls of these health issues through thorough testing – before you fall in love with a puppy (we know that’s hard!).

Socialization and Training Requirements for a Lab Weimaraner

Training and socialization are good for any puppy, but in these crosses it’s absolutely necessary.

For one thing, Lab/Weimaraner crosses will be big dogs, so they’ll need controlling.

For another thing, Labs especially have a high energy level.

Potentially mixed with the Weimaraner’s speed, agility, and endurance skills, you’re going to have your hands full if you don’t train.

Plus, Weimaraners are known to be somewhat destructive if not properly occupied. Training can help.

Don’t skimp on this – you’ll thank us for the tip as your Weimaraner Lab pup gets bigger. 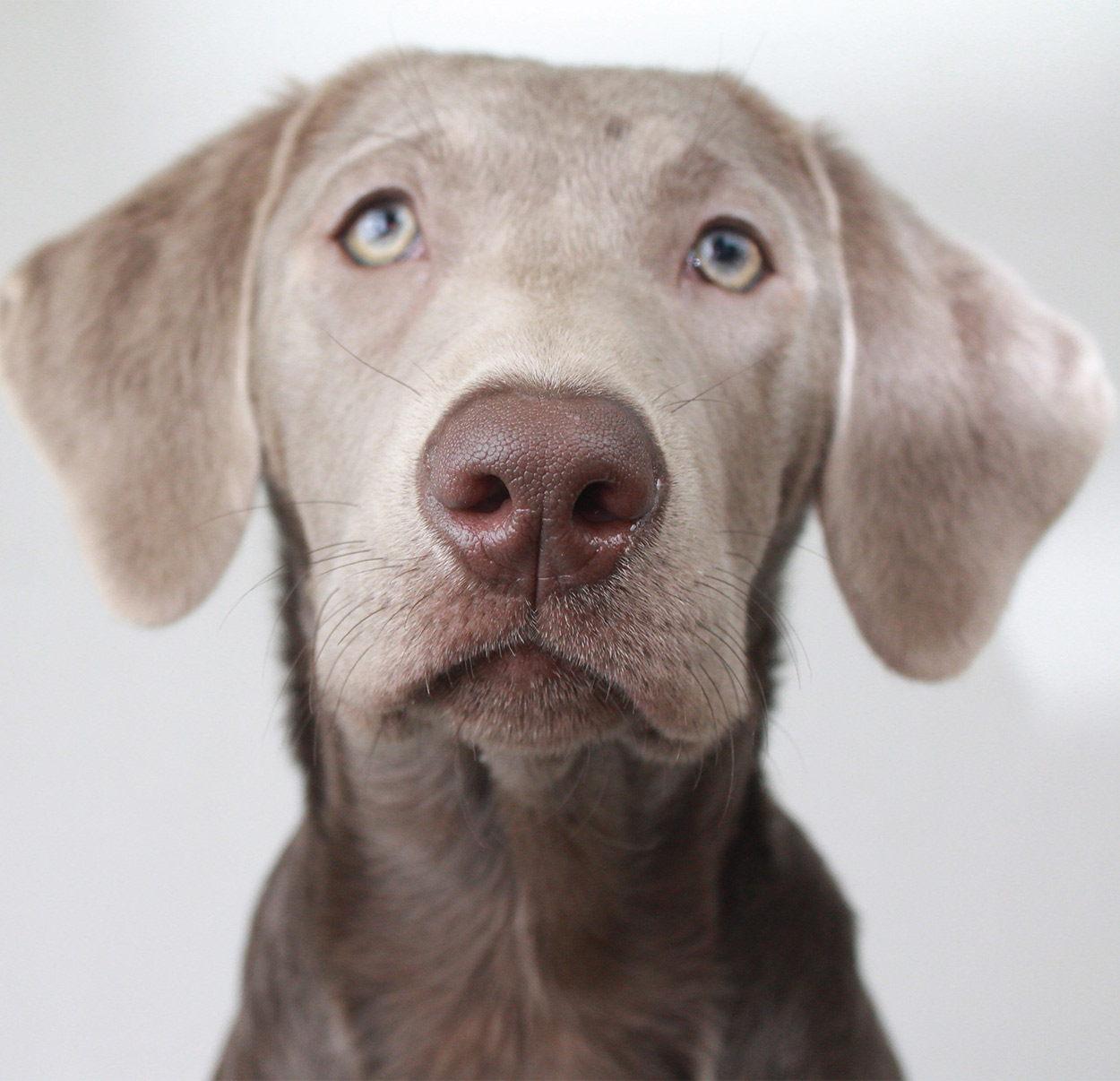 Yes! The friendliness of the Labrador and the obedient, passive nature of the Weimaraner can make for a wonderful family dog.

Labradors especially are known to be good for families, but Weimaraners are no slouch in this area either.

Just make sure to keep them active. An active Labrador x Weimaraner is a happy one.

Labmaraners are rarer than many hybrids, but you’ll still be able to find breeders online.

Don’t forget to tap into your personal networks to find a Lab Weimaraner mixed breed dog.

But don’t forget, when you visit a breeder, take note of the conditions of the dogs.

Meet the pup’s parents, ask questions, and get physical proof of health screenings.

Follow all the rules of meeting a breeder under any circumstances, and don’t commit to a purchase until you are satisfied. 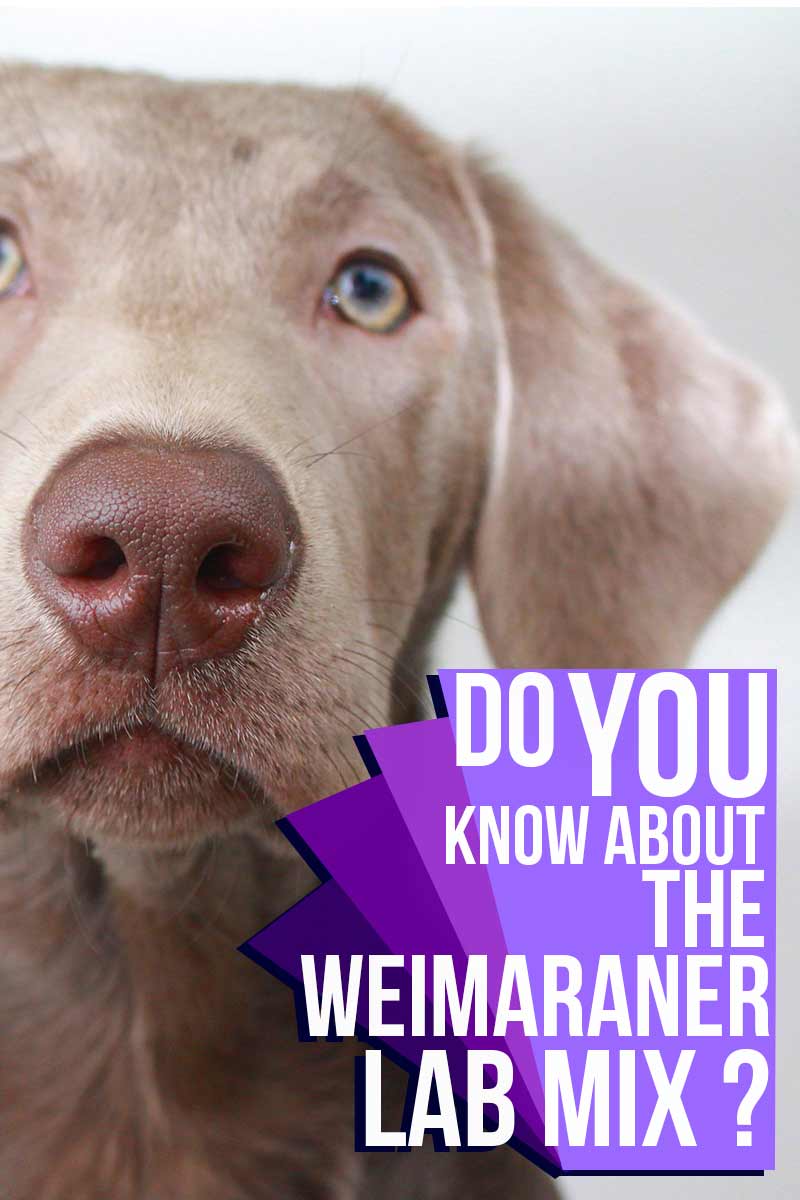 Is a Labrador Weimaraner Right For Me?

That all depends on you and your situation!

Only you can decide if this mixed breed is the one for you.

But hopefully, looking at this article has given you food for thought, so you can make an educated decision.

Do you want a Labmaraner? Do you have one? Tell us all about it in the comments.