You are here: Home / Dog Facts And Fun / 20 Fascinating Beagle Facts – How Many Do You Know? 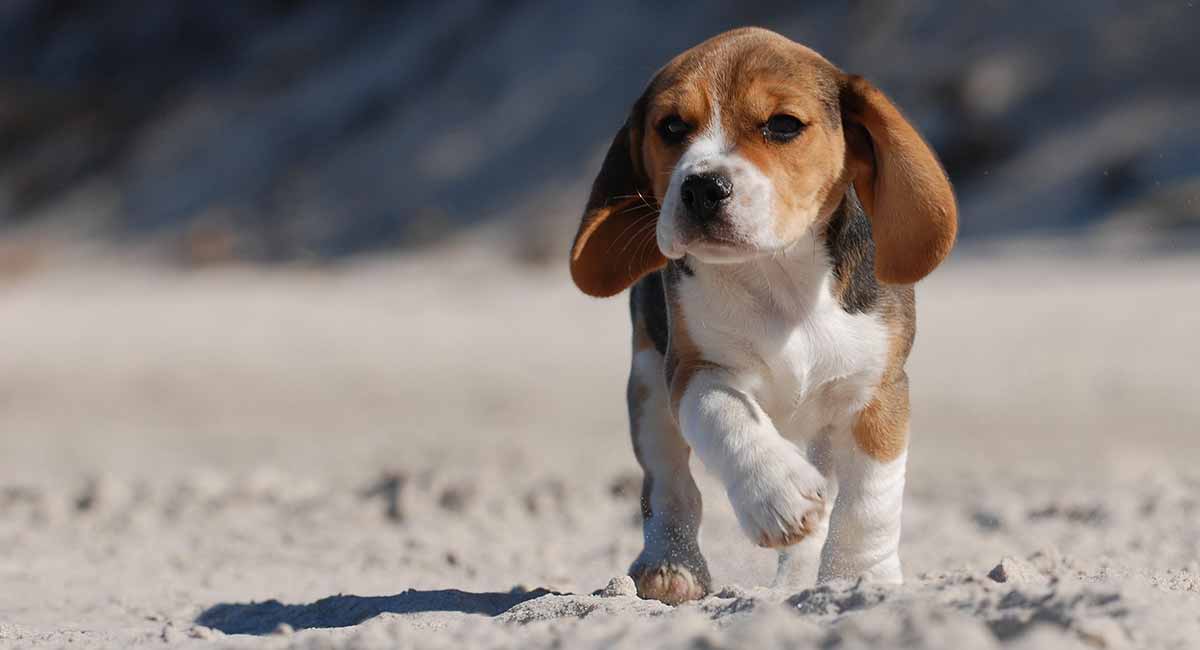 Beagles are a popular breed! So what Beagle facts do you know?

These dogs are intelligent, excitable, and determined. They’re a small hound breed packed with personality and energy.

If you love Beagles you’ll love these Beagle facts and info! Here’s a whole pack of howling-good Beagle dog facts that will amuse and amaze you. Which is your favorite?

1. Beagles Were Pocket-sized Way Before Teacup-Dogs Were Thought of

Have you heard of Pocket Beagles?

The first of our Beagle facts is that the breed started out pocket-sized.

Yes, that’s right, Beagle’s were once small enough to carry around in a pocket (although admittedly, quite a roomy one.)

The Pocket Beagle was most popular in 16th century England. Queen Elizabeth I was a big fan.

She called these her “Singing Beagles” because of their high-pitched voices. Elizabeth also entertained guests at banquets, by letting her Pocket Beagles romp around the tables.

Their Purpose Was The Same Though!

Small as Pocket Beagles were, at 8 – 9 –inches to the shoulder, they were hunting dogs. They rode around in saddlebags (or pockets) and were released to chase quarry in thickets and the undergrowth.

If you’d love to add a Pocket Beagle to your pack, it is a sad Beagle dog fact that this breed no longer exist.

Their genetic lineage died out sometime in the 19th century, and hasn’t been recognized since 1901 by any kennel club.

Oh, and buyer beware! In the modern day, Teacup Beagles may be labelled “Pocket Beagles” but they aren’t.

These diminutive but adorable dogs are actually the smallest pups in the litter and may be prone to health problems.

2. A Word In Your Ear About The Name “Beagle”

The word “Beagle” used to be a more general term, referring to any dog that was a hound.

It’s thought the word itself is a combination of two Old French words. These are “beer” meaning –open, and “guile” meaning –throat.

Combine these and you get “beeguele” meaning dogs with an open mouth that sang from the throat.

Over time, the distinctive baying of the Beagle breed meant the name stuck.

Have you ever noticed how you can tell a Beagle from the other side of the park!

Those wagging white tips are a sure-fire giveaway. Actually, this is no accident.

As hunting dogs, it was handy for the huntsman to be able to spot his dog in long grass.

4. Snoopy From ‘Peanuts’ Is A Beagle

Schulz took his inspiration from a beagle he grew up with, called Spike.

This cartoon version was originally to be called Sniffy. However, a comic book launched a few weeks ahead of Peanuts, featuring a dog of the same name.

On his mother’s suggestion, Schulz changed the dog’s name to Snoopy.

Beagles are a medium-sized hound dog. They typically weigh between 26 – 33 lbs.

Male Beagles are bigger than the females, ranging in height between 13-16 inches.

They are a smooth coated breed with tri-color being the most common. But they can also be

6. The Origins Of The Beagle Breed

The Beagle has a long, venerable history involving a variety of other hound breeds.

Back in the 8th century their distant ancestors was a scent hound, the St Hubert Hound.

From this breed the Talbot Hound was bred, which has many physical similarities with the Beagle.

However, the Talbot Hound was a slow runner, and so in the 11th century they were crossed with the Greyhound.

This faster dog was called the Southern Hound, and is thought to be the dog from which the Beagle descends.

The average life expectancy of your favorite handsome hound is 12 – 15 years.

8. How A Beagle’s Ears Improve Their Sense Of Smell!

Our next of our Beagle facts is that those long ears actually improve this dog’s ability to pick up a scent.

With their nose to the ground, those long ears create micro-air currents.

This slight breeze stirs up scent molecules and offers them up to the nose.

9. Have We Mentioned That Beagles Are A Scent Hound?

Beagles belong to a group of dogs called scent hounds. This is because of their stupendous talent at picking up a scent and following it.

Indeed, Beagles have around 220 million scent receptors in their snout, which is around 44 times more than people have.

In addition, the area in the brain dedicated to making sense of smells, is way larger in the dog…much like having a faster processor in a computer.

Such is the Beagle’s ability to pick up and distinguish scents indistinguishable to people that the US Dept. of Homeland Security has a Beagle Brigade.

These finely-tuned sniffing machines are employed at airports to sniff out contraband, illegal substances, and explosives.

10. Beagles Are The ‘Goldilocks’ Of Dogs

The Beagle character is such that they’ve been described as the Goldilocks of dogs.

This means that they are not too aggressive or too timid, friendly but not fawning, and energetic but lazy at times.

One of the many wonderful things about the Beagle is their awesome paws-onality. These guys love to have fun and are great around kids (when treated with respect).

They are funny, friendly, even-tempered dogs that are never happier than when having a sniff around, except perhaps when eating, which they also like a lot.

The downside of Beagles can be they’re apt to be naughty, especially when bored.

But plenty of exercise and the mental stimulation afforded by regular obedience training, and the Beagle makes a delightful canine companion…who’s not too big or too small.

Garfield, the large ginger cat, has a love-hate relationship with Odie the dog.

But did you realize Odie was also inspired by that all-round hale and hearty hound, the Beagle?

We’re over halfway through our Beagle facts so far… can you guess any of the others?

For decades insurance companies have compiled statistics on which dog breeds are most popular in the US.

For around 30 years, the Beagle is consistently in the Top Ten charts. In 2017 and 2018 our vocal fur-friend ranked steady at number six. Top place went to the Labrador.

But there again the Labrador has been the most popular dog (in terms of numbers) for 28 years in a row.

13. Beagles Need To Feel Part Of A Pack

With their hunting dog origins, Beagles need to feel part of a pack. On the plus side, this means they usually get on well with other dogs.

On the minus, they don’t like being left alone and can suffer from separation anxiety.

Leave a Beagle alone for several hours and they may make their own entertainment. Top of the list is ‘singing’ aka howling, which will put the neighbors on edge.

Alternatively, they may develop unwanted habits such as chewing the furniture or digging up the garden.

The trick is to provide a Beagle with plenty of exercise. Then when you have to go out, they are pleasantly tired and snooze until your return.

14. Beagles Have A Wide Vocal Range

Beagles have a voice and they’re not afraid to use it. Indeed, just as people communicate with their voices, so do Beagles.

Beagles have a repertoire of sounds, which help other dogs understand their mood. For starters there’s the standard bark, with the aim of alerting their owner to the mailman at the door.

They have a special yodelling howl for those super-exciting moments, such as picking up an interesting scent trail. This tells their pals to come-join in the party.

And last but not least, is the mournful howl, when they feed bored or sad…just because they can and it makes them feel a bit better about life.

Some well-known people who adore Beagles included Queen Elizabeth I and Kings James I of England.

Getting slightly more up-to-date, President Lyndon B Johnson owned Beagles. He imaginatively named them Little Beagle, Him, and Her.

A big Beagle fan is singer Barry Manilow, who famously owned two Beagles – Bagel and Biscuit. In the 1970s Bagel featured on one of Manilow’s album covers.

Beagles have a low maintenance, short smooth coat. They are low shedders, meaning they shed a modest amount of hair all year round.

However, they will shed more heavily if taken from a cool to a warmer climate, or at times of seasonal temperature change.

In addition, the females may have a hormonal moult, as a result of their oestrous cycle or after giving birth.

Beagles originated in England and made it to the US in the 19th century.

It was General Richard Rowett, born in England but naturalized in Illinois, who reputedly first imported Beagles into the US.

At the time there were other beagle-like hound dogs in the US, but those imported by Rowett were of superior quality.

It was Rowett’s dogs, carefully selected for their hunting ability, that went on to form the breed standard in America. In 1884 the American Kennel Club officially recognized these hound dogs as a distinct breed. [£]

This means when left in a yard for long periods of time, a Beagle is apt to use their powers to escape and find their own entertainment.

They are accomplished jumpers and great at springing over obstacles, and if that doesn’t work there’s always the option to dig their way to freedom.

19. Gromit Is Reputedly A Beagle

That super-intelligent hound, Gromit, of Wallace and Gromit fame, is also a Beagle.

With Gromit’s level of cunning, we’re not surprised. The ultimate irony is that he doesn’t speak in any of the feature films in which he stars!

With the rise of hybrid dogs, the Beagle makes a popular parent. Their good health and sensible sized nose makes them good for out-crossing with flat-faced breeds.

Try the following for the “Aaaahhh” factor.

If you’ve loved learning more about the popular Beagle breed, you’ll want more dog facts! Take a look at some of our dog fact guides below to find out even more!