You are here: Home / Dog Facts And Fun / Most Expensive Dog – The Priciest Pups in Dogdom 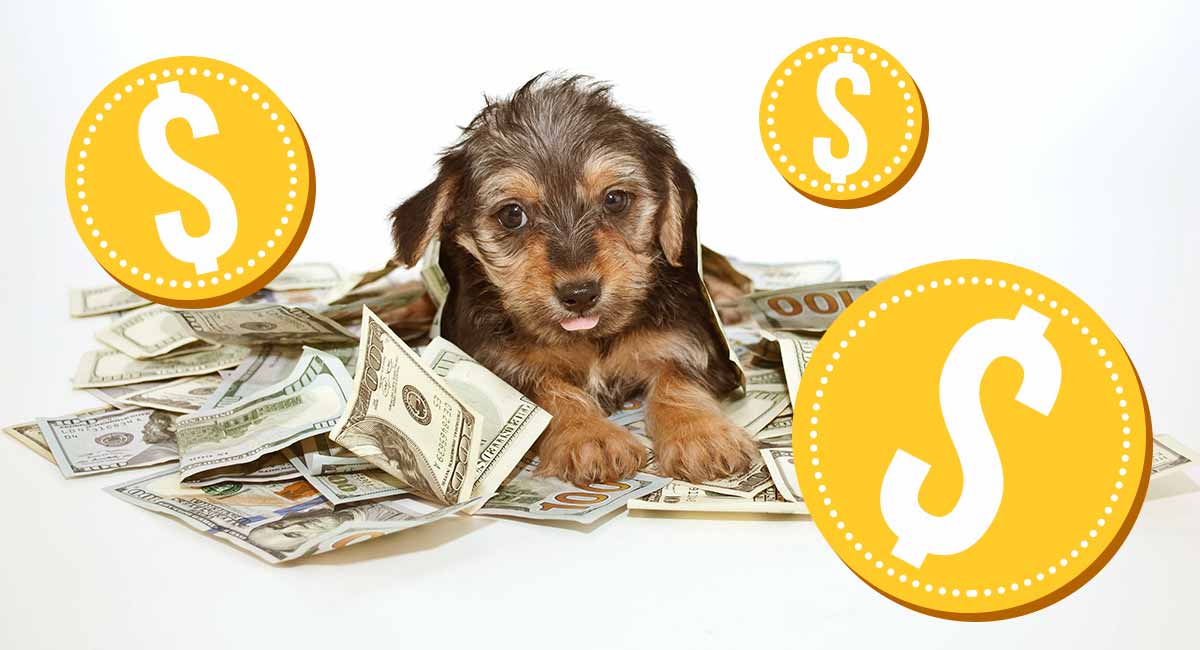 The most expensive dog on record is a Tibetan Mastiff sold in China in 2014 for $1.9M!

But, the most expensive breeds commonly bought as pets are the French Bulldog, Pug, and Chow Chow.

These puppies command high fees due to their popularity. But they also cost more than average in lifetime care.

Let’s look in closer detail at what causes this high cost. Plus, which breed is the most expensive dog to buy and raise.

The Most Expensive Dogs

What are the most expensive dog breeds?

If you’re in the market for a four-legged friend, you may be wondering why there’s such a range in price from breed to breed.

There are actually a number of reasons why some dogs come with a big price tag. Such as popularity and rarity.

Being extremely popular, like the French Bulldog currently is, can drive their asking price sky high.

In the case of the Löwchen, their rarity has put their price in the stratosphere.

But It’s Not Just Initial Price

Breeds with excessive conformational health concerns, like the English Bulldog, are more expensive.  You’re not only looking at the initial outlay, but the high cost of vet care throughout their lifetime.

In this article we’ll take a look at the most expensive dogs to buy and raise.

Why Are Some Puppies More Expensive Than Others?

A puppy whose lineage includes a long line of champions can also increase the price. And that’s regardless of the breed!

The assumption is that if the parents were champs, then their offspring will be too.

From genetic health testing to stud services. Breeders incur a lot of upfront costs before the puppies are even born.

It may not be surprising that, generally speaking, the bigger the dog, the larger the litter.

However, there are a number of factors that affect litter size.

This includes everything from the age of the mother to the time of year.

Artificially inseminated dogs typically have smaller litters than those who are impregnated naturally.

Reputable breeders will put the health and welfare of their dogs first and foremost.

For the mother’s well-being, this means no more than four litters in her lifetime.

This large-scale study of 224 dog breeds found the average litter size to be 5.4 puppies.

But the tiny Chihuahua may have only one puppy.

And this entails additional costs for the breeder. Which can contribute to the most expensive dog price!

Whelping problems are not uncommon in certain breeds.

If there are complications, it’s possible for a cesarean birth to cost thousands of dollars.

The number of genetic health screening tests available will vary from breed to breed. As will the pricing.

Each purebred dog tends to have its own inherited diseases.

It’s important for a puppy’s parents to be health tested. This is to prevent puppies from inheriting these conditions.

Unfortunately, some of our favorite breeds also have some of the most health problems. This is due to their exaggerated conformation.

The Problem with Being a Popular Breed

So it’s not surprising that when a breed becomes extremely popular, their price goes up.

Being seen as the constant companion of an admired celebrity can also give a pup’s profile a boost.

Unfortunately, when a breed becomes popular, there’s usually no shortage of backyard breeders. These are people who will try to cash in on a trend by selling poorly bred dogs at premium prices.

Most Expensive Dogs to Buy and Raise

The upfront cost of a dog is just a drop in the bucket compared to what you’ll pay for other expenses over the dog’s lifetime.

From food and toys to grooming and doggie daycare. The list of expenses associated with dog ownership can add up quickly.

But it’s the high cost of veterinary care that can easily outweigh all of these other costs combined.

This is especially true for breeds who are at a high risk of medical problems due to their conformation.

Pet insurance is a good idea. But, pricing can vary depending on the breed.

In fact, the structural problems associated with some dogs could be considered a preexisting condition. It could make them uninsurable.

So when it comes to the price of a pooch, don’t just look at the initial outlay.

Ongoing costs can put a bigger dent in your bank account.

A well-muscled, low-slung physique and large head with the signature sourpuss expression. The English Bulldog is one of the most recognizable and loved breeds.

This extreme shortening of the facial bones causes an obstruction of the airway. This makes it difficult for them to breathe properly.

In fact, sometimes expensive surgery is the only option for the breed.

So What Do They Cost?

Pricing for a Bulldog puppy typically starts in the $1,500 range. But due to their many health problems, the real cost of owning one is much more.

Bulldogs are one of the most expensive dogs to breed for a number of reasons.

The majority get birthed by cesarean section. But most are also bred using artificial insemination, and both of these procedures are costly.

There are also a slew of recommended and optional health tests for the Bulldog including:

The French Bulldog, with their distinctive bat ears, have boomed in popularity recently.

Like their larger cousin, they’re a brachycephalic dog. So, they’re prone to the same respiratory problems.

This 2016 study in the UK found that nearly half of French Bulldogs have significant breathing problems.

What’s really distressing is that these breeds didn’t always look this way.

That’s because unscrupulous breeders are creating dogs with exaggerated features.  They do this to appeal to a public who finds these flattened features cute. This causes a number of health problems that make them one of the most expensive dog breeds.

When you compare today’s brachycephalic breeds with photos from decades ago, there’s no question that their muzzles have become shortened.

This form of dwarfism causes numerous malformations of the vertebrae.

The Frenchie’s protruding eyes are prone to eye disorders, This includes corneal ulcers, which can potentially cause blindness.

Costly DNA tests for the breed include:

Small but mighty, the Pug is another flat-faced breed that is one of the most expensive dogs.

A wrinkled brow gives them an array of human-like expressions. People seem to find this very appealing.

The Pug has also been subject to extreme facial shortening by selective breeding.

Like all dogs with a flat muzzle, their breathing will be affected.

Their cute curly tail, which is characteristic of other brachycephalic breeds, is known as screw tail.

It causes spinal deformation and, in severe cases, paralysis.

The Chow Chow is an ancient breed with a lineage that dates back to 200 BC.

They have a large lion-like head, abundant fluffy coat, and unique blue-black tongue. So, it’s not surprising that these dogs are becoming increasingly popular.

Their muzzle isn’t as shortened as the breeds we’ve discussed. But, they’re still considered brachycephalic and can suffer from breathing problems.

This condition also creates folds of skin on their face, which can hide trapped dirt and bacteria. Let’s look at other health problems that contribute to their position as one of the most expensive dogs.

Their deep-set eyes leave them prone to multiple eye conditions such as cataracts, glaucoma, and entropion.

Other known health issues include:

In addition to high insurance and vet bills, Chow Chows can have an upfront cost of anywhere from $3,000 to $8,500.

Imposing and intimidating, the massive Tibetan Mastiff is an ancient guardian breed. They have a distinctively lion-like look.

They’re not only one of the world’s largest breeds, they’re also one of the rarest.

This is in part due to the fact that females only go into heat once a year.

It’s also said that since they’re one of the oldest dog breeds, very few lineages have been kept pure.

That record was broken in 2014 when a golden-haired Tibetan Mastiff weighing nearly 200 pounds sold for $1.9 million.

The ancient Siberian Samoyed is a beautiful breed.

They’re nicknamed “Smiling Sammies” for the perpetual upturned corners of the mouth.

This actually serves the purpose of keeping drool from forming icicles on the face.

These dogs are known for their lush white coats. But, they also come in cream and biscuit.

And if you’re interested in one of these rarer colors you can expect to pay a premium.

Samoyeds with an award-winning pedigree can cost up to $10,000.

This striking breed has a history that dates back to 4400 BC. This makes them one of the oldest domesticated dogs.

Sleek, strong, and athletic, these beautiful sighthounds were built for speed.

These dogs have a truly unique feature.

When they’re happy or excited, their nose and ears turn a blushing rose color.

They’re the national dog of Malta. But, Egyptian Pharaoh Hounds are rarely found in the rest of the world.

This rarity comes at a high price of up to $6,500, making them a good contender for most expensive dog!

This German breed’s name translates to “little lion,”. And that’s exactly what the friendly Löwchen looks like with their full mane and plumed tail.

These dogs have almost become extinct several times. They were once considered the world’s rarest breed.

The combination of a sweet personality and an adorable face have made the Cavalier King Charles Spaniel a favorite.

There’s no question that these toy spaniels make great companions.

But these pups also have their share of health problems.

They’re predisposed to brachycephalic airway obstruction syndrome (BAOS). This is due to the relatively short length of the head and compressed upper jaw.

The breed is also prone to a serious condition called syringomyelia, This is caused by the skull being too small for the brain.

Mitral valve disease is where the dog’s heart valve deteriorates. It can become fatal quite quickly.

It affects the Cavalier King Charles Spaniel more than other breeds.

Responsible breeders will health test, and pricing typically starts in the $2,000 to $3,000 range.

Both strong guardian and gentle playmate. The popular Rottweiler is the image of canine strength.

However, the breed has some serious and expensive health conditions. This includes hip dysplasia, eye diseases, and heart problems.

These tests, combined with the high price of stud services, can run into thousands of dollars.

You may see some of the breeds listed above advertised for prices that are much lower than the amounts quoted here. It might initially seem like a bargain for one of the most expensive dog breeds.

But, this should be a red flag.

The importance of choosing a responsible breeder who puts the health and welfare of their dogs over profit cannot be overstated.

Remember that the initial price of the dog is only the beginning of what it costs to be a dog owner.

Choosing a breed with myriad health concerns can quickly drain your wallet.

But what’s truly agonizing is seeing your loving companion suffer throughout their life.

What You Can Do To Help

Many of our most beloved breeds are subject to numerous health conditions.

And distressingly, many of these problems are needlessly caused by selective breeding for sought-after physical characteristics.

Instead of encouraging this practice, you can opt to adopt a dog from a shelter.

This selection of guides by Pippa Mattinson, author of best-selling dog books, The Happy Puppy Handbook and Total Recall will help you find the right dog for you.