You are here: Home / Breeds / Mix / Mastiff Mixes: Which One Is Right for You? 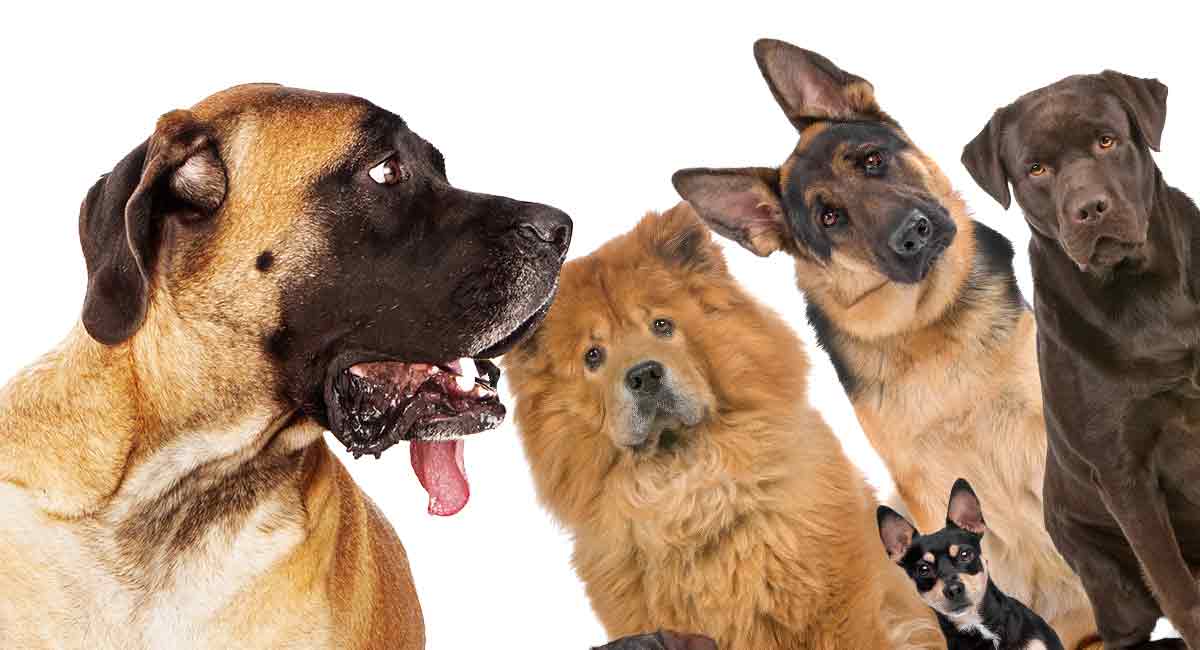 Mastiff mix puppies are unusual and when adopted into the right homes can grow into fantastic family pets.

We look at several different Mastiff mixes in this guide.

We help you figure out what your Mastiff mix puppy will look like when grown up. And what kind of temperament and care needs a Mastiff mix is likely to have.

These massive pups, including Mastiff mixes, can be found in all walks of life today.

They are lounging at the feet of celebrities, standing guard on K-9 duty, keeping watch over livestock herds and taking up whole couches in homes around the world.

Crossing Mastiff dogs with other breeds has become common practice for a variety of sensible reasons, which we talk about in more detail here.

Read on to meet some of the most popular Mastiff mix dogs.

The Mastiff is a truly ancient pure breed.

There is some evidence that the Mastiff’s lineage extends all the way back to 2,500 B.C. in the mountainous regions of the continent of Asia.

The Mastiff has also aided in the development of many other popular now-purebred dog breeds, including the Chow Chow, the Saint Bernard and even the tiny Pug dog.

It can be a bit confusing at first to learn about Mastiffs and discover how many different purebred Mastiff dogs exist.

The most common of these breeds is the Old English Mastiff, sometimes referred to as the OEM, and the breed which gets to call itself simply Mastiff.

They typically weigh upwards of 100 pounds, although the largest Mastiff on record weighed 343 pounds.

The Mastiff breed standard outlines certain general breed traits to look for: a calm disposition, gentle and steady, good with children, strong protective instincts, and devoted to their families.

The practice of crossbreeding, sometimes called hybrid breeding, is a controversial one.

That being said, most modern purebred dogs were mix breed dogs at some point in their breed development.

One of the major potential benefits of cross-breeding two purebred dogs is called hybrid vigor.

This theory dates back to Charles Darwin himself.

It states that crossbreeding can ease health issues caused by “inbreeding depression” (lack of genetic diversity).

Personality and temperament, size, coat type, energy level, prey drive, aggression and other traits can be modified through hybrid breeding.

The ideal outcome is to promote each breed’s strengths while minimizing behavioral concerns or known health weaknesses.

In the case of the purebred Mastiff, known health issues to watch for include bloat (gastric torsion) elbow and hip dysplasia, and cardiac, thyroid and eye issues.

A traditional Mastiff’s life expectancy ranges from six to 10 years. It’s typical for a giant breed, but low compared to dog population at large.

Crossbreeding with a smaller, longer-lived breed can give their puppies the chance of a longer lifespan.

If you are searching for information about a specific Mastiff mix breed dog, this handy clickable list can get you to the right section quickly.

Also known as: the Makita

A Makita dog has one Akita parent and one Mastiff parent.

This is a dog that is going to inherit a strong personality, and strong guarding and protecting instincts from both sides, as this inspiring story of a rescued adopted Makita showcases.

The Makita is smaller than most Mastiffs, likely weighing between 70 and 160 pounds.

But this is a powerful pup and also a hairy one during seasonal sheds.

An Akita Mastiff mix has a life expectancy of six to 13 years.

Also known as: the Masti-Bull

When an American Bulldog and a Mastiff are bred, the puppies are called Masti-Bulls.

Your Masti-Bull is likely to be a large but not giant pup, weighing between 50 and 120 pounds.

These dogs need some extra grooming due to the Bulldog parent’s characteristic facial wrinkles and short (brachycephalic) muzzle type.

In personality, a Masti-Bull is likely to be people-centric with moderate activity needs.

The typical life expectancy is six to 10 years.

Also known as: the Mountain Mastiff

Both parent dogs are bred for working alongside people in jobs that require independent thinking, strength and courage.

Your Mountain Mastiff is likely to inherit a sweet temperament and very strong people focus.

However, this is a shedding pup so prepare for lots of brushing and vacuuming.

As Berners are another giant breed, the general life expectancy Mountain Mastiff puppies is still just six to 10 years.

Also known as: the Boxmas

Boxmas puppies have one Boxer parent and one Mastiff parent.

These dogs are likely to be large sized, weighing 65 to 160 pounds.

Boxmas dogs won’t need lots of grooming—a weekly brushing should do it.

These pups inherit an active, people-centric personality with strong watchdog instincts and heaps of courage.

Their average life expectancy is six to 12 years.

Also known as: the Mastahoula

The Mastahoula is a cross-bred dog with one Catahoula Leopard dog parent and one Mastiff parent.

This dog is an interesting hybrid. Catahoula Leopard dogs are not generally recommended for first-time or companion canine-only owners, and the mixed breed might be too much of a challenge too.

This dog may shed lightly year-round, and is easy to brush and groom.

The typical life expectancy for the Mastahoula is six to 14 years.

Also known as: the Mastapeake

A Mastapeake is a puppy bred from a Chesapeake Bay Retriever and a Mastiff.

Both of these dogs are smart, active, and have strong protecting and guarding instincts.

The Chesapeake Bay Retriever is more naturally reserved and needs more socialization training. There’s no way to control or predict whether a Mastapeake puppy will inherit this reserve.

Expect your pup to shed somewhat year-round and also go through a seasonal “coat blow” shed.

A Mastapeake’s typical life expectancy ranges from six to 13 years.

Also known as: the Mastiffman

The Mastiffman is a cross between a Doberman Pinscher and a Mastiff.

This dog weighs anywhere from 75 to 160 pounds, and may be leaner or stockier, depending on genetic influence.

The Mastiffman is smart, people-centric and active with strong protective instincts.

These dogs shed some year-round, but are easy to brush and groom.

Their typical life expectancy is six to 12 years.

Also known as: the Mastiff Shepherd

The Mastiff Shepherd is a crossbred dog with one German Shepherd parent and one Mastiff parent.

The Mastiff Shepherd weighs 50 to 120 pounds.

The GSD has more natural reserve and a more serious nature, while the Mastiff is more affectionate and loving.

You wouldn’t know for sure until your Mastiff Shepherd puppy reaches maturity which dog their temperament will most take after.

Both are excellent athletes.

You can expect some shedding year-round and seasonally with your Mastiff Shepherd.

The average life expectancy is six to 10 years.

Also known as: the Daniff

The Daniff is what you get when a Great Dane and a Mastiff have puppies.

Both parent dogs are known to be gentle with children.

Neither one appears to know they are enormous—expect your adult Daniff to weigh between 170 and 230 pounds but try to cuddle up on the sofa regardless.

Sadly these dogs have the shortened life expectancy of many giant breeds, with the average being six to 10 years.

Also known as: the Maspyr

The Maspyr is the name given to a puppy with one Great Pyrenees parent and one Mastiff parent.

Expect your Maspyr to weigh 100-plus pounds in adulthood.

Both parent dogs have amiable, laid-back personalities that disguise a brave guard dog who would do anything for family.

A Maspyr can be a bit of a challenge to train, especially if your puppy takes after the Great Pyrenees dog, which is a particularly independent breed.

The Maspyr’s general life expectancy is six to 12 years.

Also known as: the Irish Mastiff

An Irish Mastiff dog is a cross between an Irish Wolfhound and a Mastiff.

Expect your Irish Mastiff to weigh anywhere from 105 to 200-plus pounds.

Both purebred parents are known to be kind, amiable and gentle companions.

The Irish Wolfhound tends to be a late-maturing dog that can be destructive in puppyhood.

Also known as: the Mastidor

The Mastidor crosses the uber-popular Labrador Retriever with the Mastiff.

Your Mastidor’s adult weight may be anywhere from 80 to 120-plus pounds.

One thing you can count on with a Mastidor is a shedding coat, especially when the seasons change.

These dogs tend to be gentle, loving and good with kids.

The Mastidor’s life span is likely to range from six to 12 years.

Also known as: the Pit Mastiff

The Pit Mastiff is a puppy with one American Pitbull Terrier parent and one Mastiff parent.

The official breed standard for Pitbulls specifies that these dogs are known to be completely loving and devoted to their people.

However, poor breeding practices mean that Pitbulls have a reputation for aggression too, and owning or breeding from them is prohibited in some regions.

Check local laws before you look for Pit Mastiff puppies, and always insist on meeting their Pitbull parent.

Expect a sizable pup weighing 60 to 120-plus pounds.

These dogs shed seasonally and have a general life expectancy of six to 15 years.

Also known as: the Mastidoodle

The Mastidoodle is one of the best-known and most popular of the Mastiff mix dogs.

The Standard Poodle is a popular choice in hybrid breeding because of this dog’s signature non-shedding coat.

But with a Mastidoodle, there is no guarantee your pup is non-shedding.

Expect a dog that weighs between 70 and 160 pounds. The typical life expectancy is six to 18 years.

Also known as: the English Mastweiler

The English Mastweiler has one Rottweiler parent and one Mastiff parent.

Your pup likely weighs between 80 and 160 pounds.

While Rottweilers have a reputation for being fierce guard dogs, with their people they are generally goofy, loving and playful.

The English Mastweiler’s coat is short- to medium-length, straight and smooth, with seasonal shedding.

This hybrid dog may live six to 10 years.

Also known as: the Saint Mastiff

The Saint Mastiff is a mix puppy with one Saint Bernard parent and one Mastiff parent.

Your Saint Mastiff is likely to shed and drool, so be prepared for lots of both.

Their typical life expectancy is six to 10 years.

Is a Mastiff Mix Right for Me?

Whether each dog is right for you is an individual decision.

But getting familiar with the habits, health and size of their parents from puppy to adulthood may help with your choice.

We hope you have enjoyed learning more about each of these wonderful Mastiff mix breed dogs.

If you already have one, please tell us what they’re like in the comments box below!

Maldarelli, C., 2014, “Although Purebred Dogs Can Be Best in Show, Are They Worst in Health?” Scientific American

“The History of the Mastiff,” The Mastiff Club of America