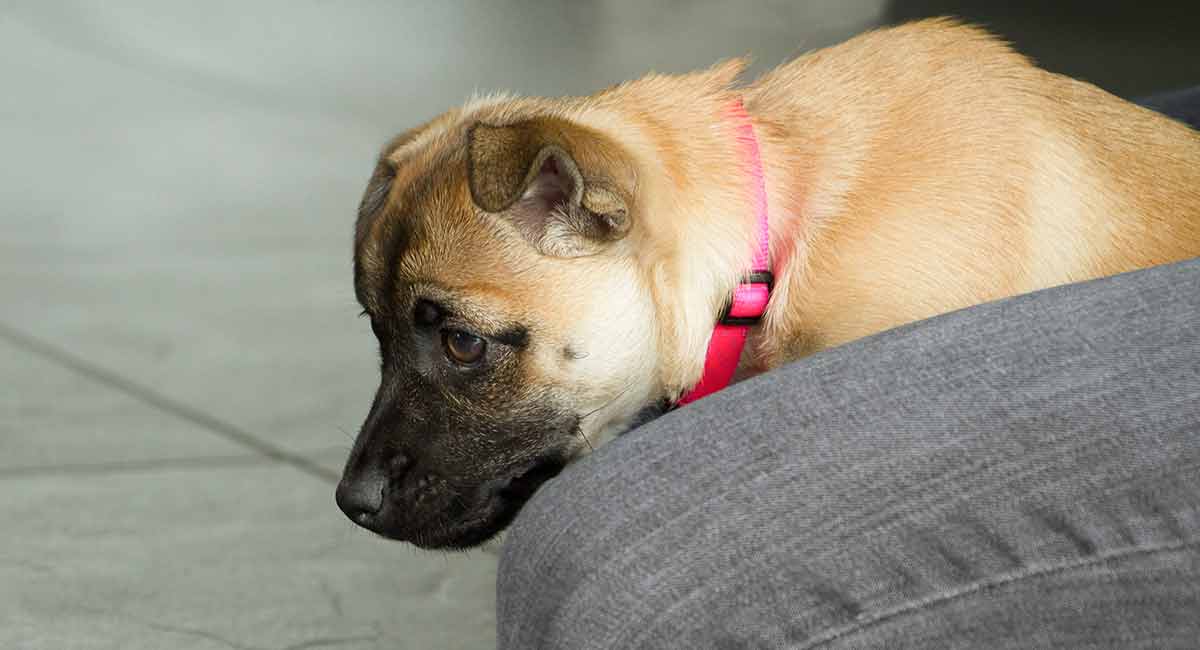 Jack Russell Terrier mixes are unique even in the ever-widening circle of so-called hybrid or “designer” dog breeds.

Jack Russell Terriers have long been a staple on the movie scene because they are cute, smart, and eager to perform.

Perhaps the most famous breed ambassador was Eddie from the hit television sitcom “Frasier,” who reportedly received more fan mail than all his human co-stars combined!

About the Jack Russell Terrier

The Jack Russell Terrier is truly a unique dog breed.

Of these three well-known breeds, only the Jack Russell Terrier has not yet received purebred recognition through the American Kennel Club (AKC).

However, as of 2009, the Jack Russell Terrier is a recognized purebred dog breed with the United Kennel Club in the UK.

Rather than being bred for conformation (appearance) like purebred show breeds, the Jack Russell Terrier is bred for temperament and traits as a working dog.

So even purebred Jack Russell Terriers can look quite different from each other!

Russell Terriers, in general, are known to be expert hunters with lively and energetic personalities.

They may look like adorable lap dogs, but Terriers are not known for sitting still!

For this reason, you can expect your Jack Russell terrier mix personality to be vivacious, tireless, and tenacious.

The JackChi is a hybrid dog with one Chihuahua parent and one Jack Russell Terrier parent. 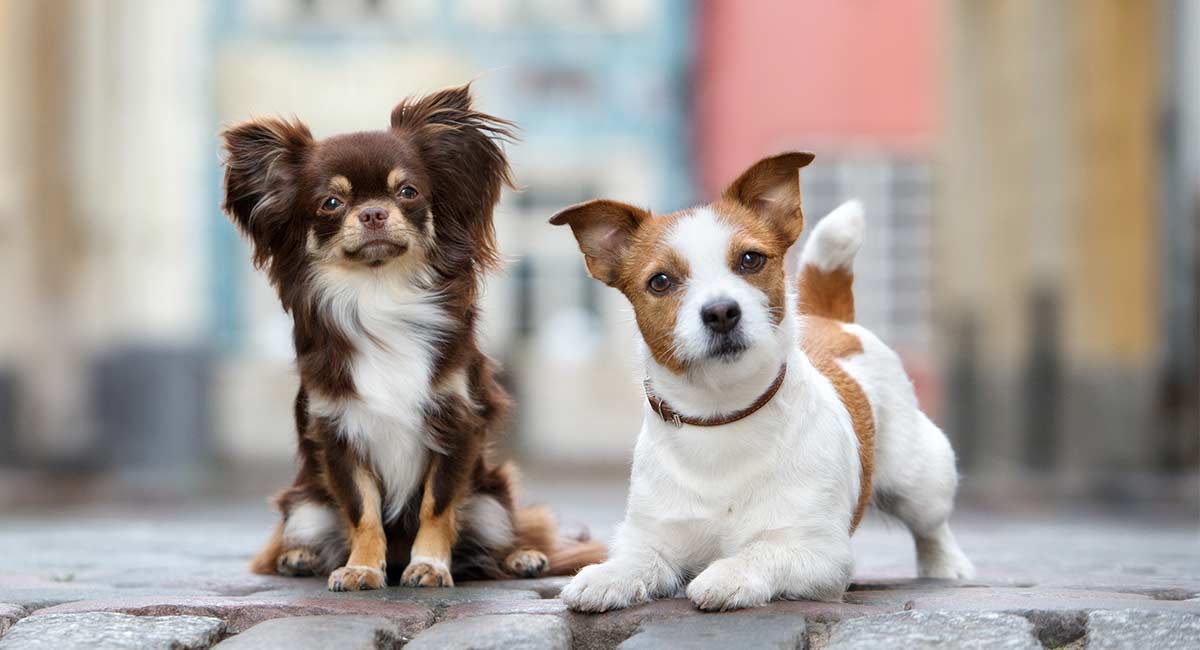 The Jack Russell Terrier comes from a long lineage of fox hunters, while the diminutive Chihuahua was primarily bred to be a companion dog.

The Chihuahua may be little, but this breed is also famously feisty and makes a great guard dog!

Chihuahua Jack Russell Terrier mix breeds are naturally confident, courageous beyond their size, and always game for play and activity.

Jack Russell Terriers typically have short double-layer coats and they look not unlike their primary prey – the fox!

Chihuahuas can have short or long coats and can be single or double-coated.

Because of this variety, the best way to predict what your JackChi puppy’s adult coat may look like is to learn as much as you can about each parent dog.

The typical JackChi will grow up to weigh between 8 and 18 pounds and stand between 10 and 15 inches tall (paw to shoulder).

The typical life expectancy for a JackChi is between 13 and 15 years.

The Jackabee hybrid dog breed has the perfect name to match his personality – this lively, sociable pup will keep you on your toes while keeping a smile on your face! 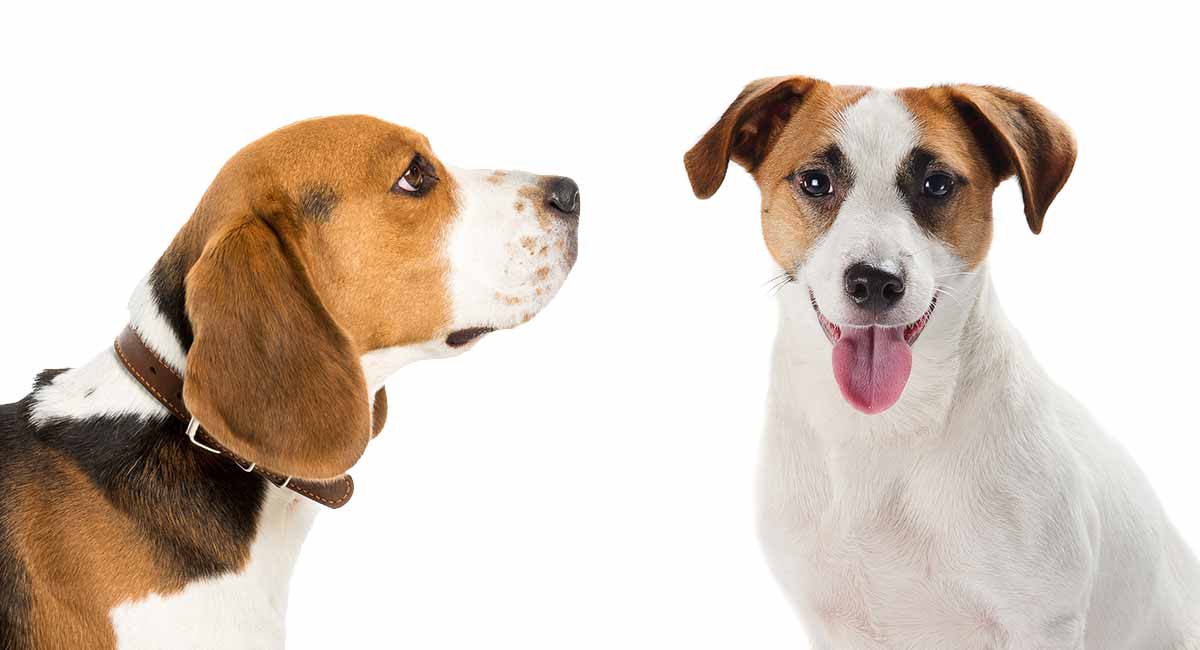 A Jackabee puppy has one Beagle parent and one Jack Russell Terrier parent dog.

Both the Beagle and the Jack Russell Terrier are hunting and working dogs through and through, with plenty of smarts and drive to get the job done.

The Jackabee will inherit the strong prey drive that all hunting dogs have, so proceed with caution if your household already includes other potentially vulnerable family pets!

You can expect your Jackabee to weigh anywhere from 14 to 30 pounds when fully grown and to stand 12 to 15 inches tall (paw to shoulder).

The typically Jackabee life expectancy ranges from 10 to 16 years.

For even more information about Beagle Jack Russell Terrier mixes, be sure to check out our Jackabee breed review. 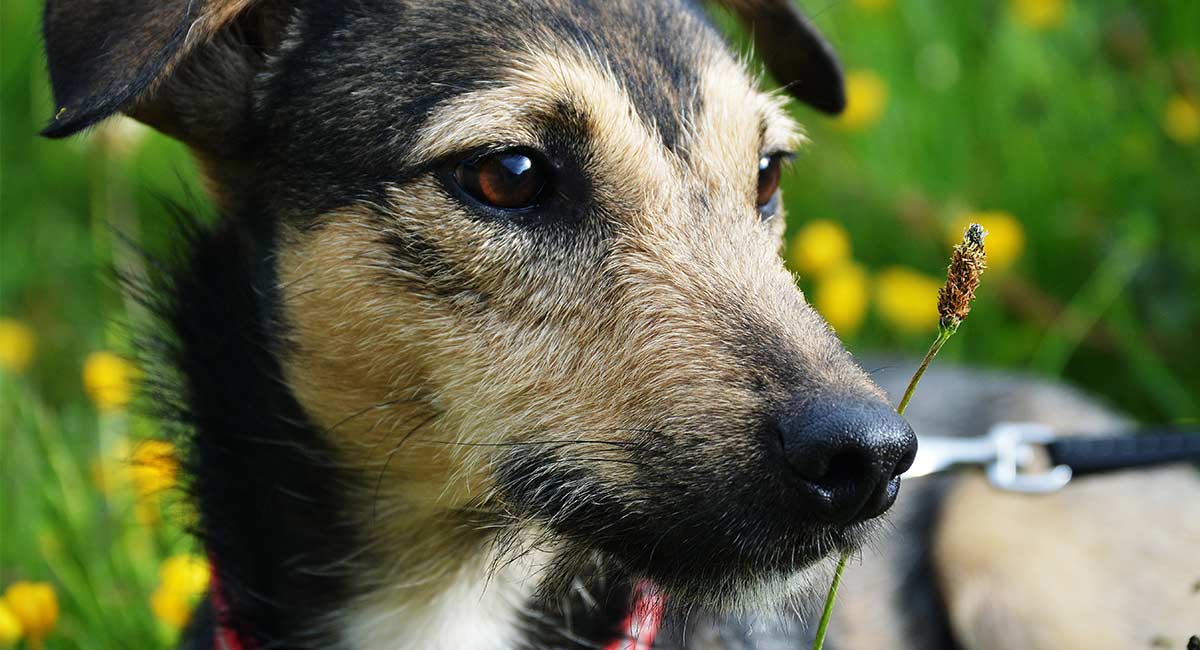 The Whippet is a very distinctive-looking purebred dog that is often described as a “small Greyhound” in appearance.

The Whippet is born and bred to work as a sighthound.

These dogs are incredibly quick on their feet and are popular racing and sporting dogs to this day. Originally, the Whippet was bred to hunt rabbits and rodents and other small, fast prey.

When you crossbreed the Whippet with the Jack Russell Terrier, you are essentially breeding a medium-size dog with a small dog.

So you may get a puppy that weighs anywhere from 10 to 40 pounds.

For this reason, the best way to know what your puppy may weigh as a grown-up is to meet the parent dogs.

Personality and temperament can also vary quite a bit depending on which parent dog has a greater influence on a given puppy.

The Whippet is a calmer dog than the Jack Russell Terrier, but both have a lively prey drive, making them a poor fit for any household with other vulnerable family pets!

The average lifespan of a Jack Russell terrier mix with a Whippet is between 12 and 16 years.

You will find detailed information in our hybrid dog breed review guide.

This Jack Russell mix gives the parent dogs away with its name – can it be any other than the distinctive Dachshund lending its name to this hybrid pup? 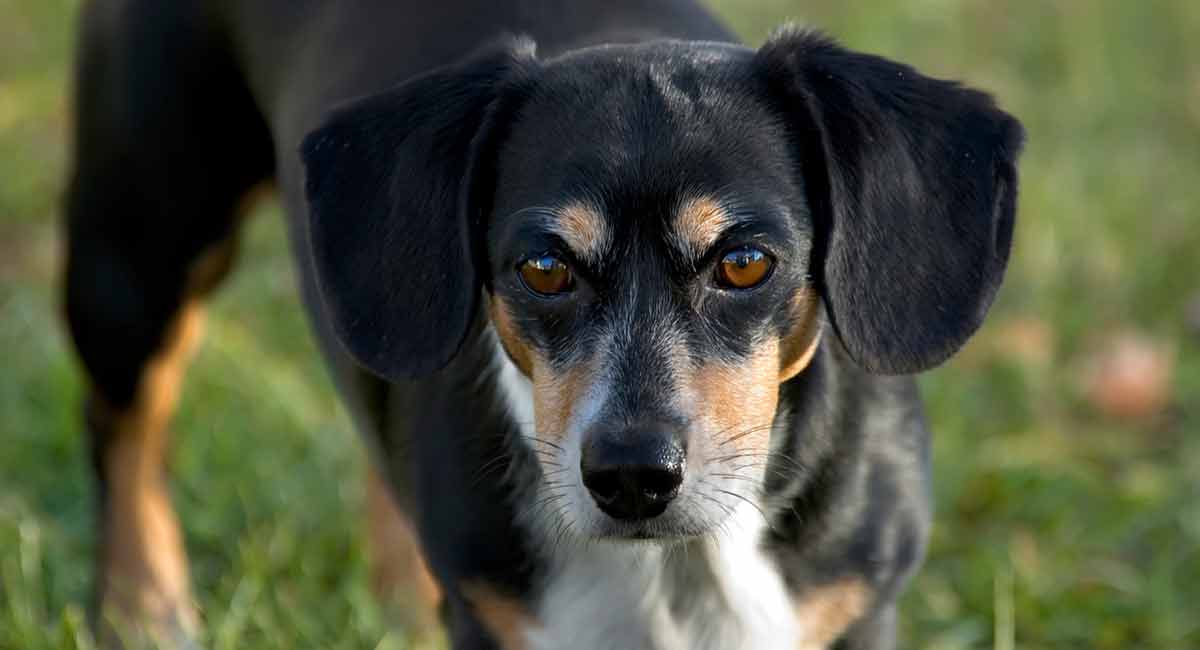 The Dachshund is bred in two sizes today: standard and miniature.

The Jack Russell is a small dog that rarely tops 20 pounds.

So your Jackshund puppy may grow up to weigh anywhere from 10 to 30+ pounds.

Both the Jack Russell Terrier and the Dachshund are hunting dogs through and through.

So you can expect to bring home a great natural watchdog as well as a talented hunting dog when you choose a Jackshund.

A Jackshund’s average life expectancy is between 12 and 16 years.

The Welsh Corgi (usually from the Pembroke line) and the Jack Russell Terrier are the parent dogs of CoJack puppies. 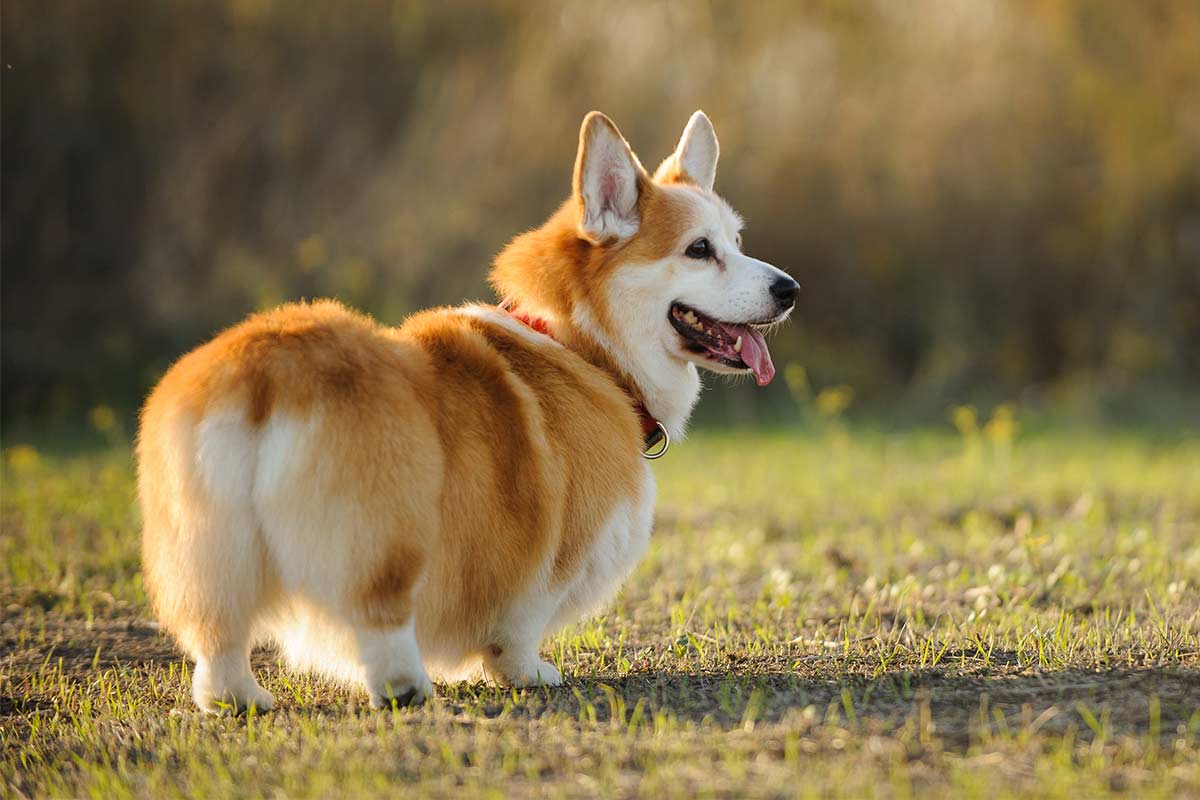 Both the Corgi and the Jack Russell Terrier are natural working dogs – the Corgi is a herder and the Terrier breed are small game hunters through-and-through.

The CoJack is very cute to be sure, but this hybrid dog breed can have very strong herding instincts.

And a strong prey drive that may make family life challenging if you have small children or other vulnerable family pets.

A fully grown CoJack puppy may weigh between 18 and 28 pounds and stand up to 13 inches tall (paw to shoulder).

The typical CoJack life expectancy is 12 to 15 years.

A Whoodle has one Wheaten Poodle parent and one Jack Russell Terrier parent. 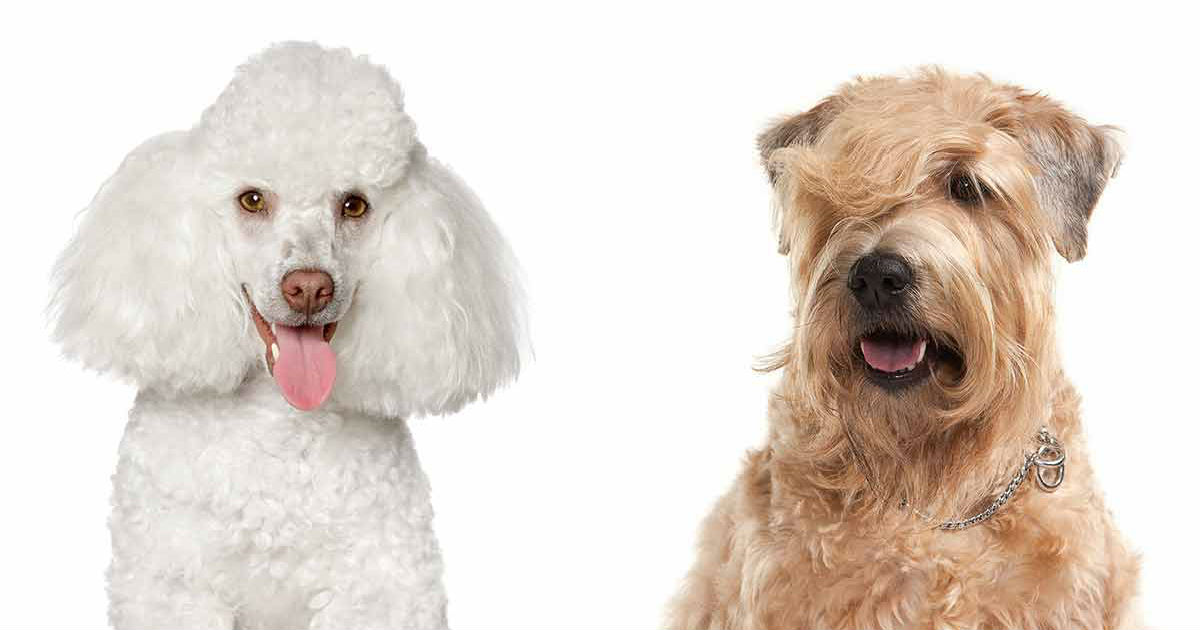 Wheaten Poodles are known to be friendly and loving and very good with children.

If your Whoodle puppy favors the Wheaten parent, you may have a lovely family dog in your midst!

However, Whoodles probably are not a good choice if your household already includes other small “prey-type” family pets.

You can expect a medium to large Jack Russell terrier mix when your Whoodle puppy grows up.

Size-wise, expect your adult puppy to weigh in between 20 and 45 pounds and stand 12 to 20 inches tall (paw to shoulder).

The life expectancy of a Whoodle mix ranges from 12 to 15 years.

Our detailed Whoodle review guide will give you lots more information about the Wheaten Poodle Jack Russell Terrier mix breed!

The Jackapoo, also (adorably) known as the Jackadoodle, is a cross between a Poodle and a Jack Russell Terrier.

Your Jackapoo will be 100 percent working and hunting dog.

With the Poodle’s athletic talents as a water dog and retriever crossed with the Terrier’s time-honored land prey hunting abilities.

The Poodle is one of the most popular purebred dogs in hybrid dog breeding today due to this dog’s famously non-shedding coat.

Although there is no truly “hypoallergenic” dog breed, this can make a Poodle crossbreed like a Jackapoo a good choice for people who are more sensitive to pet allergies.

Depending on the size of the Poodle parent (standard, miniature, or toy), your puppy may grow up to be any height going!

However, the average Jackapoo size in adulthood is 13 to 25 pounds.

You can expect your Jackapoo pup’s typical life expectancy to range from 12 to 15 years.

Which are your favorite Jack Russell Terrier mixes?

Do you have a favorite pup picked out from the many wonderful Jack Russell Terrier mixes you have just met in this article?

We’d love to hear more about your favorite Jack Russell terrier mix dog – please drop us a comment to share your experiences!