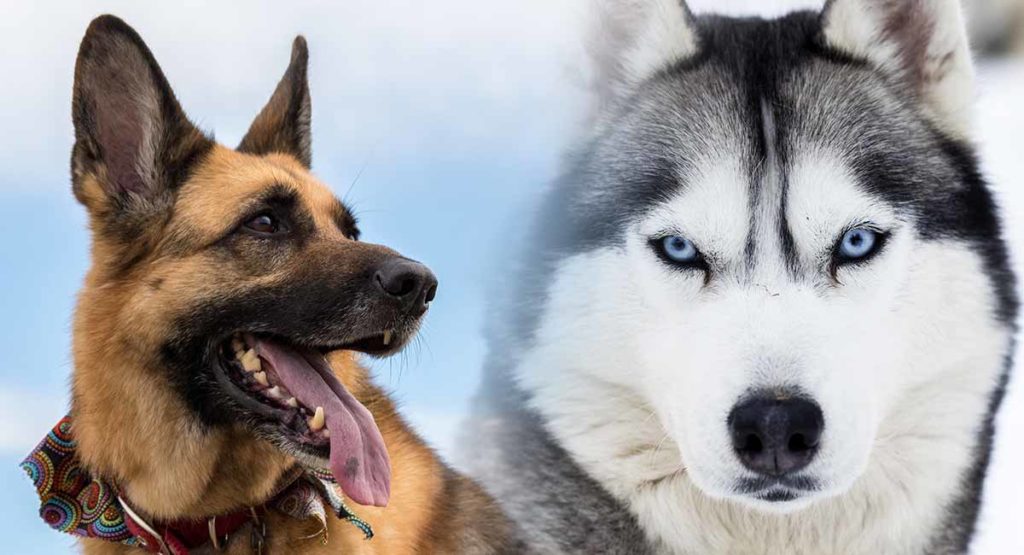 Unsure how to choose between German Shepherd vs Husky?

This is the article for you!

We’ll see how they measure up physically, and how their health and personalities compare.

But first, let’s compare where they came from.

The German Shepherd and Husky are both working breeds, but they come from two very different backgrounds.

The German Shepherd hails from Germany, where he was originally bred as a herding dog.

It took 35 years to refine the German Shepherd breed.

Today he works as a police dog, military dog, search and rescue dog, and service dog, amongst many other canine professions.

If you can’t choose between them, there’s always the German Shepherd Husky Mix!

The German Shepherd is the AKC’s 2nd most frequently registered breed, after the Labrador Retriever.

The Siberian Husky, on the other hand, was refined in Siberia.

There he earned his keep as an all-around sled and companion dog for the roaming Chukchi people.

Bred to pull loads for extended distances in frigid temperatures, the Husky played a vital role in the survival of his original creators.

Due to the Chukchi’s isolation, the pureness of the Siberian Husky remained intact for generations.

The Husky breed also played a vital role in saving countless lives of the people of Nome, Alaska after a diphtheria epidemic in 1925.

A sled team of Siberian Huskies ran 658 miles in under six days in order to deliver a lifesaving medicine to the townspeople.

The Husky of today still maintains that same resiliency and heroic work ethic and sits at number 12 out of 194 on the AKC’s list of America’s favorite dogs.

Both the German Shepherd and the Husky are handsome dogs.

And both of them have distinct looks that set them apart.

The German Shepherd is the larger of the two breeds, standing 22-26 inches tall and weighing between 50 and 90 pounds.

But the Siberian Husky isn’t far behind.

They stand approximately 20-23.5 inches tall and weigh between 35 and 50 pounds.

The German Shepherd and the Husky have remarkably similar coats.

Both coats are weather resistant and double-layered.

And they both shed profusely during shedding season.

Still, it is not difficult to tell a German Shepherd and a Husky apart.

The German Shepherd has a lean and muscular build with keen eyes and erect ears.

Their fur comes in six colors:

The Husky is more compact than the German Shepherd, with a more proportionately shaped body.

They have erect ears, a long tail, and expressive eyes that are either blue, brown, or one of each.

Both the German Shepherd and the Husky make good family dogs as they do well with children and other pets.

However, this does not mean that both of these breeds are right for every family.

The German Shepherd, for example, requires consistent training, early socialization, and lots of family time as he becomes extremely bonded with his people.

He is also sensitive and incredibly intelligent, and with intelligence comes the desire to learn.

He will thrive when given doggy jobs to do around the house like helping with laundry or bringing in the newspaper or groceries.

How Does the Husky Compare?

The Husky also makes for a good pet.

And even though his ancestors worked all day alongside other dogs, they also learned fondness for their human families.

So he becomes extremely bonded to his family, and struggles if left in an empty house for long periods.

This is a breed who needs constant companionship and will be an excellent candidate for homes with other doggie siblings.

Both the Husky and the German Shepherd are active breeds, but the Husky especially loves to run.

This means he fits in best with families who are very active, whatever the season.

Owners be warned, the Husky is also an excellent escape artist!

Luckily, both the German Shepherd and the Husky are intelligent breeds who are eager to please and enjoy family life.

However, the Husky is an independent thinker.

He tends to only follow commands which he sees the benefit in, so he demands patience when it comes to training.

The German Shepherd, on the other hand, highly enjoys learning new things and will actually thrive when given jobs to do.

The Husky and the German Shepherd are both prone to boredom due to their high intelligence and work ethic.

And, like all breeds, the German Shepherd and the Husky will need early socialization and obedience training to ensure they are happy and well-adjusted dogs.

Both the Husky and the German Shepherd are active breeds who need lots of exercise and mental stimulation to stay healthy and happy.

The Husky is a bit more energetic than the German Shepherd.

He may require more time and maintenance when it comes to an exercise routine.

Still, both of these breeds will need at least an hour or two of exercise every day.

On top of that they need free time to run and play in a securely fenced yard or dog park.

When comparing the health of these two breeds, it looks like the Husky is the healthiest.

With a lifespan of 12-14 years, the Husky is most prone to

The AKC recommends early health screening for the breed, including a hip evaluation and an ophthalmologist evaluation.

The German Shepherd  has a shorter lifespan than the Husky, living only 7-10 years.

He is also prone to more health issues than the Husky, including degenerative myelopathy, elbow dysplasia, and bloat.

Just like the Husky, the German Shepherd may also suffer from hip dysplasia.

Early health screening in your German Shepherd, including a hip evaluation and elbow evaluation, can help you to get a leg up on his overall vitality.

Of course, a healthy diet and lifestyle will also play a large role in both the Husky and the German Shepherd’s overall health.

They also recommend making sure your dog’s food has real meat within the first few ingredients and does not contain unnecessary additives like corn, soy, or wheat.

Luckily, both the German Shepherd and the Husky are naturally clean dogs.

Brush them with a suitable brush once or twice a week and give them an occasional bath.

You will also want to keep their nails trimmed and their ears and teeth cleaned to keep infection at bay.

Husky vs German Shpeherd – Which Breed Makes A Better Pet?

If you’re an energetic family with young children, the Husky might be more suitable.

He is playful, energetic, very patient with kids, and would be a good choice for young families on the move.

However, make sure you have a flexible schedule or other dogs around to keep your Husky busy.

On the other hand, if you are interested in an intelligent dog who is eager to please and can help out around the house, then the German Shepherd is for you.

This breed thrives on doggy jobs and loves to be a helpful part of his family unit.

However, the German Shepherd has a shorter lifespan and is prone to a few more health issues than the Husky.

If the possibility of health issues is deterring you from getting one of these breeds, you may want to consider adopting an adult dog whose overall health is already known.

To learn more about adopting a dog from a shelter, visit us here!

Did We Help You Choose Between German Shepherd Vs Husky?

Let us know which dog would suit you best in our comment section below!

If you’ve loved learning about the differences between these two breeds, we’ve got plenty of others for you to take a look at!

Hsu & Serpell, Development and validation of a questionnaire for measuring behavior and temperament traits in pet dogs, Journal of the American Veterinary Medical Association, 2003.

Stanley Coren, The Intelligence of Dogs, 1994.