You are here: Home / Breeds / Mix / German Shepherd Boxer Mix – Is This Cross Right For you? 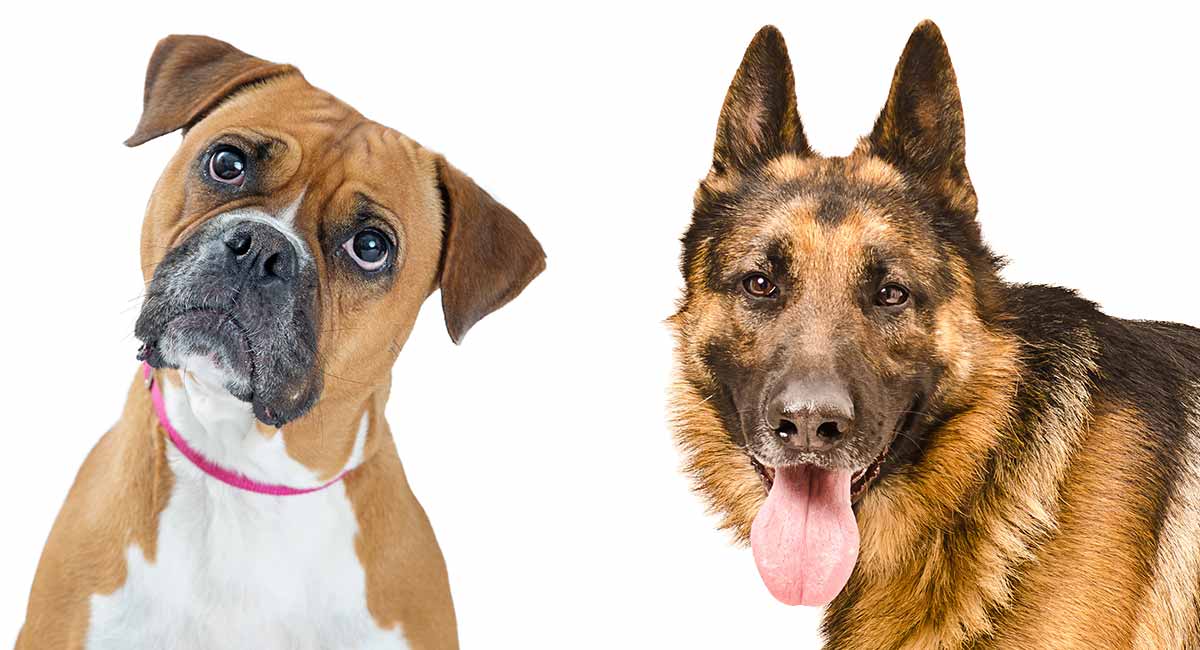 Is a German Shepherd Boxer mix the right dog for you?

But is this pup the best choice for your family?

Let’s find out what you can expect from this curious cross.

The History of the German Shepherd

The name German Shepherd used to be an umbrella term for several different kinds of herding dogs.

In the 1800s, a German cavalry officer developed his perfect herding dog from these breeds. 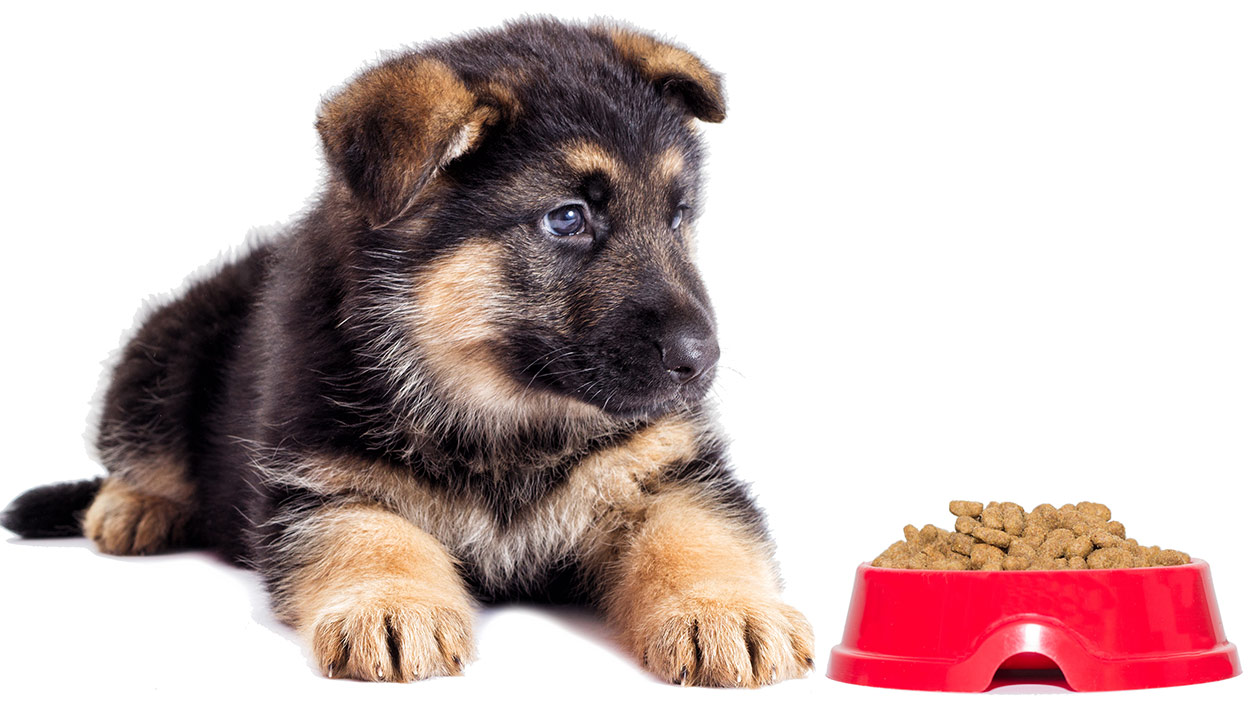 The popularity of the dog began to grow, thanks to the adventures of celebrity German Shepherds RinTin-Tin and Strongheart.

German Shepherds are the dog of choice for military and police work, too.

The History of the Boxer

Like the German Shepherd, the Boxer also originated in Germany sometime in the late 1800s, although ancestors of this breed go back as far as 2,500 B.C.

Those ancestors were known as big game hunters able to take on bears, bison and wild boar. 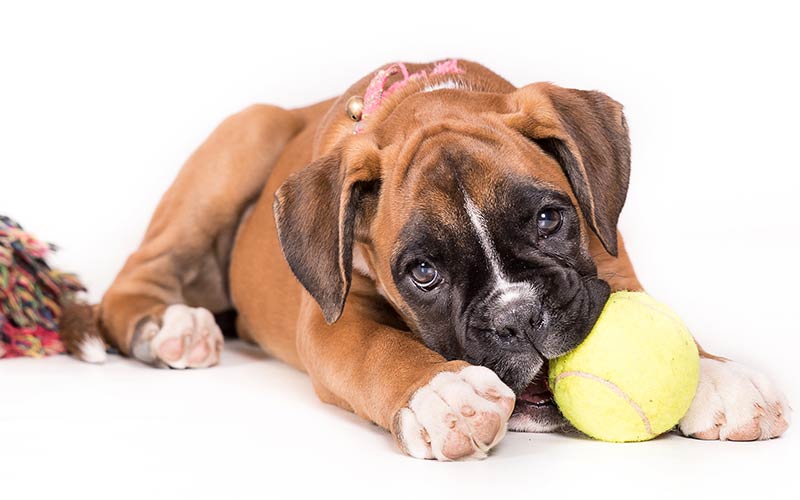 Since then, the Boxer has been bred down to a smaller but just as impressive dog.

Also like the German Shepherd, the Boxer is a worker bee.

Known for its ability to herd cattle, work with military and police forces and provide protection.

The modern Boxer is one of the 10 most popular breeds in the U.S.

It’s not clear when the German Shepherd Boxer mix first came into the scene, but we can be confident it’s here to stay.

For one thing, it is a medium to large-sized dog, which makes sense when both parents are 25 or more inches.

In fact, the German Shepherd and Boxer have quite a few appearance features in common.

Both parents have a solid, sturdy build.

The German Shepherd and Boxer puppy will likely inherit that trait and weighs from 65 to 95 pounds fully grown.

Coloring is another shared feature of Boxers and German Shepherds.

You can expect German Shepherd Boxer puppies to be:

The pup will have a combination of both parents coloring, but many have the Boxer’s dark face or white patches.

The floppy ears of a Boxer are controlled by a dominant gene, which means all the puppies in a Boxer German Shepherd litter will have them too.

But the shape of a dog’s muzzle is controlled by several genes.

This means a Boxer German Shepherd puppy could have a muzzle which closely resembles one parent, or looks like a mix of both.

A Boxer Shepherd mix dog will probably have a short and thick coat.

The German Shepherd Boxer puppy comes from parents known for their intelligence and trainability.

Both parents are athletic, too, but that’s where the commonalities end.

A German Shepherd has a softer temperament and natural reserve.

Boxers are a little more outgoing.

Their puppies could inherit one or a mix of both personalities.

Even within a single litter, some puppies could be a little shy, and other bouncing extroverts.

Both parents develop a strong bond with their owners and family members and are natural herders.

That can extend to herding other pets and small children.

An Austrian study of dog bites in children found that kids are five times more likely to be bitten by a German Shepherd than a Labrador Retriever or a crossbreed dog.

For this reason, German Shepherd mix breed dogs might not be the best fit in a household with young children.

However, breed is only part of the story with dog bites – training and socialization are important factors too.

Ultimately, you can expect your German Shepherd Boxer puppies might be:

The exact traits will differ from dog to dog, though, depending on their personal temperament and that of their parents.

These are dogs that generally like to run and play.

They are not likely to be happy living with a couch potato.

They need plenty of outdoor time, exercise and enrichment toys to be content.

Without that, the Boxer Shepherd puppy can be rambunctious and moody.

These are intelligent dogs that not only respond well to training but thrive on it.

As the dog grows older expand it, so you keep your best friend mentally stimulated.

Socialize at a young age, as well, and introduce the puppy to a diverse group of dogs to prevent aggression issues later in life.

When adequately socialized as a puppy, the adult German Shepherd Boxer mix may acclimate better to new pets.

All designer dogs can inherit characteristics and health issues from their parents.

This is why checking the parentage of a Boxer x German Shepherd is so critical.

The best way to understand the potential health problems of a crossbred puppy is to look at what conditions frequently affect their parents.

Conditions common in Boxers include:

German Shepherds are at risk of:

There are some common hereditary problems for both parents like hip dysplasia.

That doubles the puppy’s odds of developing the condition.

With this in mind, both parents should be health tested before breeding.

Tests you can expect the responsible breeder to do include:

And for proof of health tests.

A German Shepherd Boxer dog is an excellent choice for the right home, but it might not be the best breed for everyone.

The ideal home might be with someone who is athletic and likes to spend time outdoors.

They need plenty of exercise and training.

This mix breed makes excellent watchdogs but will need close supervision around small children and other pets.

One thing you can probably count on from a Boxer Shepherd mix puppy is loyalty and protection.

They tend to be pretty healthy, but they can have medical problems that require ongoing treatment or correction.

If you are looking for a German Shepherd Boxer mix puppy, start with a reputable breeder.

Stay away from puppy mills or getting a dog from a classified ad.

You need to know the history of the puppy to ensure it is healthy and not aggressive.

A proper breeder will allow you to meet the dog’s parents so you can see for yourself what to expect from the offspring.

In some cases, you may need to travel to find the right breeder, but it will be worth the effort when you get that new puppy home.

Do you have a German Shepherd Boxer mix?

We’d love to hear about him or her in the comments below!