You are here: Home / Breeds / Mix / American Bulldog Mixes – Which One Is Right For You? 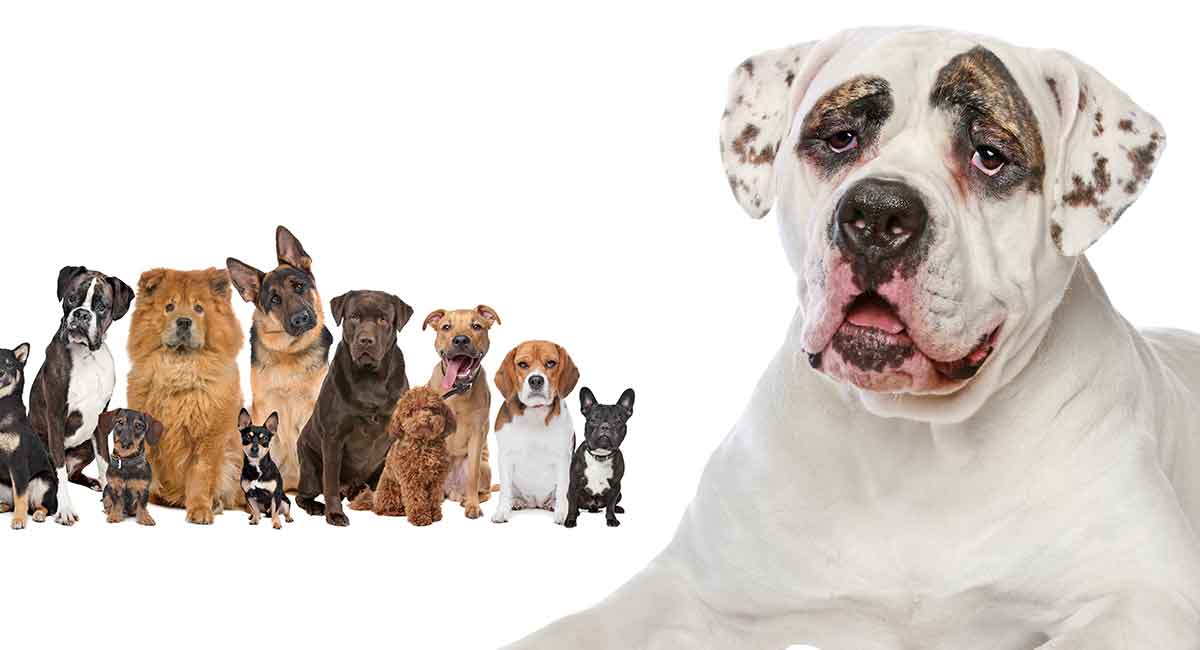 American Bulldog mixes are an unusual crossbreed that is steadily gaining popularity.

Mixed breeds are also called designer dogs, and they are created by mating two purebred dogs of different types.

The resulting puppies will take some of their looks and personality from each parent, usually favoring one over the other. That means you will need to look closely at both parent breeds to make sure a designer pup of that particular cross will fit the bill.

Here on our site, we have lots of guides all about different dog breeds. To help you, we’ve included handy links to those breed guides in this article.

The American Bulldog is a distant relative of the Old English Bulldog that was first brought to the north of the U.S. by immigrants who wanted to use their working dogs on farms.

The original bulldog was cross bred to make it suitable for all-around farm work, including handling cattle, as well as hunting wild pigs.

An adult American Bulldog grows to be between 20 and 28 inches in height and weighs between 60 to 120 pounds.

The breed makes a good guard dog because they are quite territorial and suspicious of strangers. Although generally good with other pets and with small children, American Bulldog puppies should be socialized.

As with any breed of dog, play with small children or other dogs should be supervised. The American Bulldog is a large, muscular dog, and accidents can happen.

The American Bulldog is an energetic breed that loves to play. So, your pup will need plenty of exercise and activity to keep him happy. This dog is not suited to life in a small apartment or a home without an outside space to burn off excess energy.

American Bulldogs are generally healthy and can live from 10 to 16 years. However, there are health conditions that the breed can suffer from, including:

Depending on the other parent, some American Bulldog mixes inherit the brachycephalic features of the English bulldog.

Brachycephalic dogs have flat faces and short snouts, making breathing difficult. They are also intolerant of hot weather, leading to overheating during exercise. You can find out more about the care of a brachycephalic dog at this link.

Fortunately, American Bulldog mixes do not generally inherit a flat face and are not known to suffer from breathing problems.

Care of the American Bulldog is straightforward, although they can drool excessively, so you’ll need to have wet-wipes handy!

The American Bulldog has a short coat that comes in several colors, including:

American Bulldogs shed moderately throughout the year, and they don’t usually require more than a weekly brushing to get rid of loose hair.

Bathing is only needed if your American Bulldog has been enjoying some particularly mucky activity!

It’s important to know that American Bulldog mixes will take on some of the traits of both parents. To find out more about what to expect, use the “Search” facility on our site to learn more about each breed.

Always ask your puppy’s breeder to show you proof that both the pup’s parents were health screened for the conditions mentioned above.

It’s a good idea to ask to meet both the parent dogs. That gives you a good idea of their looks and personalities. Photos of your puppy’s brothers and sisters produced by the same mom and dad will give you a clearer idea of how your pup will turn out.

Of course, if you decide to take on American Bulldog mixes from a rescue center, you probably won’t have access to parents or siblings. In this case, it’s just a matter of luck how your puppy will turn out!

However, you must be prepared to spend some time socializing your new friend before they’re allowed to mix with other pets and small children.

American Bulldogs are quite large animals. So, American Bulldog mixes will not be the best choice of a canine companion if you only have a small apartment or a house without a backyard.

There are lots of different American Bulldog mixes to choose from. So, let’s dive right in and take a closer look at some of them.

The Bullypit is a cross between an American Bulldog and a Pitbull.

Bullypits are often regarded as fantastic guard dogs. They are suspicious of strangers in their home territory.

These medium-sized dogs are relatively easy to train and are very obedient. However, this crossbreed would not be the best choice for the first-time dog owner.

These are friendly, affectionate dogs that do not hesitate to protect their family. However, that doesn’t mean these pups are aggressive or hard to control.

Bullypits are susceptible to a few health conditions that are associated with both parent breeds, including:

The Bullypit is a big, active dog that needs lots of exercise. They have short coats that don’t take much grooming to keep in good condition.

The Bulloxer is a cross between an American Bulldog and a Boxer.

Bulloxers are known to be an energetic, friendly, sociable dog that makes a great family pet.

However, you should know these pups can be somewhat hyper and need lots of exercise.

If left alone without sufficient exercise before leaving the house for the day, the Bulloxer quickly gets bored and becomes destructive.

The Bulloxer can weigh as much as 90 pounds and live for up to 15 years. These are pretty healthy pups, although they can suffer from stomach upsets and hip dysplasia.

Bulloxers have short hair that requires moderate brushing to keep the coat in good condition.

Thanks to the Bulloxer’s exuberant personality, this breed is best-suited to an experienced dog owner.

The Beabull is a cross between an American Bulldog and a Beagle.

Beabulls are smaller than most other American Bulldog mixes, typically reaching around 30 pounds in weight.

These pups have a very independent, stubborn streak, although they are intelligent and relatively easy to train.

Unlike some of the other American Bulldog cross breeds mentioned, the Beabull will be happy with an hour’s walk each day and access to some outside space.

Beabulls tend to shed quite heavily all year round and will need frequent grooming.

The Beabull is a brilliant family dog and usually gets along well with kids and other pets.

Although you’ll receive unlimited affection from the Beabull, these dogs aren’t recommended for first-time owners because of their stubborn, independent streaks.

The Bulldog Shepherd is a cross between a German Shepherd and an American Bulldog.

The first thing to know about the Bulldog Shepherd is that these are large dogs. The can sometimes grow to weigh close to 100 pounds.

So, you’ll need a large house with plenty of outside space if you choose one of these pups.

The Bulldog Shepherd is highly intelligent, fast, alert, and extremely trainable. They make excellent guard dogs, but they’re also fantastic with children and other pets.

The Bulldog Shepherd can be suspicious of strangers, so early socialization is essential.

These are very active dogs that need lots of exercise every day, including interactive training sessions to keep them happy and obedient.

Your Bulldog Shepherd could live for 10 to 15 years.

The Bulldog Shepherd typically has a short coat that needs moderate grooming once or twice a week.

These are healthy pups, but they can suffer from hip and elbow dysplasia, so you must remember to ask the breeder for proof that both parents have been tested.

The Bullkita is a large cross breed between an American Bulldog and an Akita.

Bullkitas are big dogs, growing to weigh between 70 and 90 pounds and standing from 18 to 22 inches tall.

Although these are healthy dogs, living between 9 and 11 years, they can be prone to hip and elbow dysplasia and some eye conditions, including cataracts.

Bullkitas have short, smooth coats that shed moderately, so you’ll need to brush your dog once or twice a week. Also, Bullkitas tend to drool, so keep those tissues and wipes handy, especially if you have visitors!

The Bullkita can be friendly and loyal, but they are assertive and very much in tune with their environment.

For that reason, these pups thrive in stable homes with a consistent schedule. Too many changes at once can make the Bullkita anxious and may exacerbate the breed’s aggressive tendency.

Provided your pup takes after his American Bulldog parent, he will be fine with kids. However, if your dog is more like the Akita, you will need to supervise him closely with small children and other pets.

This breed has a moderate amount of energy and will enjoy daily exercise with his human family,

These dogs are probably best if you are a family that has experience in dog ownership.

Is an American Bulldog Mix Right For Me?

One thing about American Bulldog mixes is that they all have a pleasant temperament, making them a pleasure to own.

Although they are loving, extremely smart, and playful, there’s also the common trait that’s typical of American Bulldogs; they can be stubborn!

If you enjoy a busy, outdoor lifestyle and you have plenty of time to devote to training and exercising your dog, an American Bulldog mix could be the perfect pup for you.

The typical American Bulldog mix will get on well with your kids and with your other pets, but you will need to socialize your puppy.

You’ll need plenty of space both inside and outside of your home to comfortably accommodate your American Bulldog mix, as these are usually big dogs.

Do you have an American Bulldog mix? If you do, we’d love to hear all about him or her! Why not tell us your canine companion full story in the comments section below?

If you’ve loved this article, check out our guide to the Bully Pit!