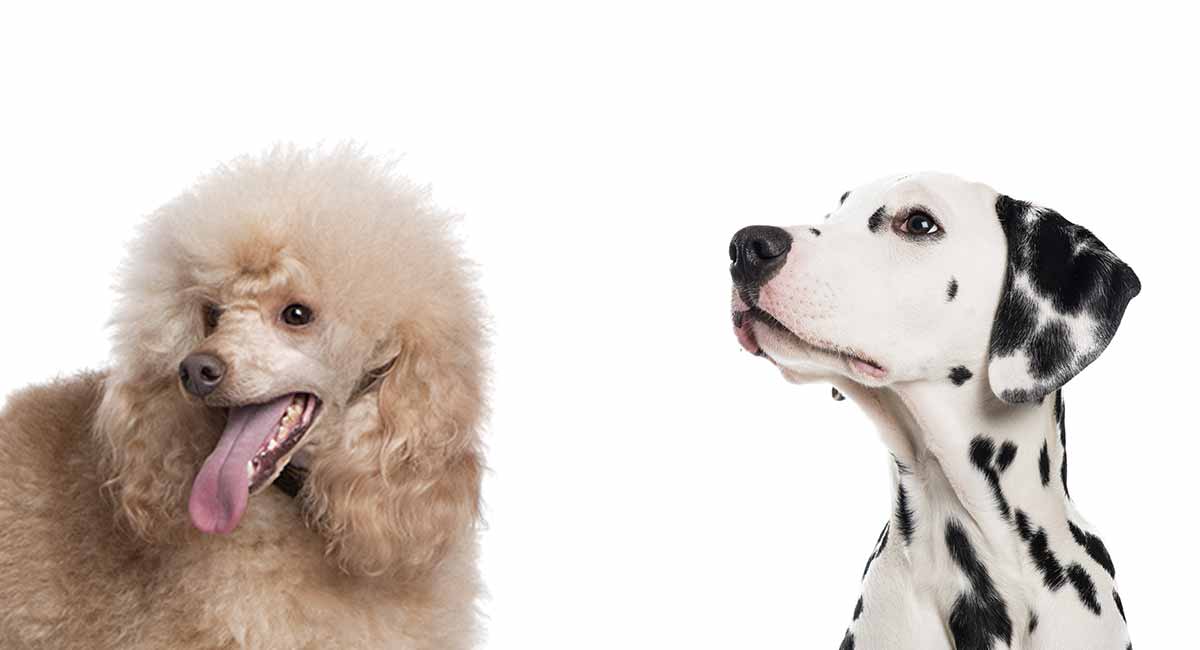 The Dalmadoodle is an energetic, loving and very distinctive dog. Today we are going to take a look at the pros and cons of Dalmadoodle puppies as pets, and help you decide whether a Dalmatian Poodle mix is the right dog for your lifestyle.

One of the larger Poodle mixes, Dalmadoodles are also sometimes known as Dalmapoos. They are very loyal dogs and fit well into active homes where there is someone around for much of the day.

Eye-catching and intelligent, the Dalmadoodle is a cross between the beautiful Dalmatian and the brainy Poodle. With a look that is sure to stop people in their tracks, it’s no wonder the Dalmatian Doodle’s popularity has been consistently rising.

A hybrid dog such as the Dalmadoodle is the offspring of two specifically chosen purebred parents. Breeders of designer dogs hope that their litters will maintain certain characteristics of their purebred parents such as intelligence and a unique coat.

The Dalmadoodle is a newer generation crossbreed, which simply means there is very little known about how he came to be. However, taking a look at the histories of his purebred parents should give us a bit of insight on how this unique crossbreed works and why he is the way he is.

History of the Dalmatian

An ancient breed, the Dalmatian’s origin goes back far, so it has been difficult for experts to pinpoint exactly where the breed began. However, according to the American Kennel Club, many experts believe the Dalmatian got his start in the British Isles, Europe, North Africa and Asia.

Still, it wasn’t until the 1800s when specific documentation was able to place the Dalmatian near Central Europe, in an area previously called Dalmatia. Bred as a coach dog, the Dalmatian found work running alongside horse-drawn carriages. It was his duty to guard these carriages when its occupants were away. Dalmatian mix breeds may or may not carry these guarding traits with them.

The Dalmatian was a favorite dog of the gypsy people as well, known to wander with them all across Europe. Many believe this is why the true origin of the Dalmatian is so difficult to locate, considering that they, like the gypsies, considered the entire world their home. But gypsies were not the only ones who were fond of the Dalmatian.

Nobles of Brittan found themselves smitten with this breed, commissioning them as not only coach dogs but also companions. By the 1800s, Dalmatians became famous for running along horse-drawn fire engines. Thus beginning the famous friendship between the breed and firefighters.

Origin of the Poodle

While we have all heard the term “French poodle,” there is actually no such thing. In fact, the poodle originally comes from Germany, where he was primarily bred as a duck hunting dog over 400 years ago. Astonishingly, the poodle’s famous haircut actually derives from his duck hunting days, when his fabulous pompons were utilized more for practicality than vanity.

Poodles were bred to swim in very cold waters to retrieve ducks for their owners, and the elaborate pompons were meant to protect their bodies while allowing them agility and speed in the water. Later, this flamboyant haircut would eventually help to take the poodle from his working origins to the laps of luxury.

From Hunting to Home

In fact, the poodle has quite the Cinderella story, going from rags to riches when nobles began to take a liking to his fanciful coat, loyal demeanor and natural showmanship. But the ever-humble poodle still maintained his work ethic and continued to find use as a circus dog as well as a truffle hunter throughout history.

How Big Do Dalmadoodles Get?

Seeing as the Dalmadoodle crossbreed is a mix between two larger dogs, it’s safe to assume he will be bigger. Still, there are some size variations between the Dalmatian and the Poodle, so the size of your Dalmadoodle could vary. A full grown Dalmatian Poodle mix’s average size will depend on the type of Poodle parent.

How big are Dalmatians?

The Poodle comes in three size varieties: Standard, Miniature and Toy. They range between 4 to 70lbs, depending on the type!

The Dalmadoodle is typically a cross between the Dalmatian and the Standard Poodle, which is the largest of the Poodle size varieties, standing over 15 inches tall and weighing 40 to 70 pounds. So, you can expect your Dalmadoodle to range in size from 15 to 19 inches and weighing anywhere from 40 to 75 pounds.

A mini Dalmatian Poodle mix is created by combining a Dalmatian with a Miniature or Toy Poodle. These pups will be smaller than the average Standard Dalmadoodle full grown, but they can still be taller than a Mini Poodle as they have Dalmatian genes too. Potential puppy parents looking for a smaller version of the Dalmatian will often pick this miniature Dalmatian mix, but their dog can grow larger than they were hoping.

Dalmadoodles usually have floppy ears, short relatively smooth coats and long tails. As with all crossbreeds, the Dalmatian Poodle mix is going to vary in looks depending on what he inherits from his parents. Considering the fact that the Dalmatian and the poodle look so different, there is a wide variety of looks you could get.

The Dalmatian and Poodle mix comes in a huge range of colors, although black and white are probably the most prevalent. The Standard Poodle comes in several color varieties, including:

Like the Dalmatian, the poodle also has long, floppy ears, but his coat is dense, curly and hardly sheds. When it comes to your Dalmadoodle cross, prepare for any number of coat varieties. Remember, because he is a crossbreed, the way your Dalmadoodle looks is going to be left up to chance.

Dalmadoodles will usually have wavy coats rather than tight curls like Poodles. That’s because the genes which control curl come in two types: N for ‘no curl’ and C for ‘curl’. Poodles have two curl genes (CC) which creates a curly coat, while Dalmatians have two ‘no curl’ genes (NN).

Grooming your Dalmatian cross Poodle could vary, depending on the type of coat he inherits from his parents. While the Dalmatian has a shorter coat, he requires weekly brushing to reduce shedding and to keep his hair shiny and healthy.

The Poodle requires much more upkeep and needs to be brushed several times a week to keep his thick, curly hair from matting. And while there is no such thing as a hypoallergenic dog, the Poodle does not shed often and produces much less dander than other breeds, reducing the chance of allergies. However, the Dalmatian is quite the shedder, so whether or not your Dalmadoodle will shed will be left up to genetics.

It’s best to expect a high shedding, allergy producing dog and prepare for this. Then you won’t end up disappointed! Your Dalmadoodle will also need his ears cleaned regularly to avoid ear infection, and his nails trimmed to keep them from cracking or splitting.

When considering adding a Dalmadoodle or any Dalmatian mix or Poodle mix to your home, you’ll want to know about temperament. Dalmatian crossbreeds and poodle crossbreeds are known to be pretty intelligent, so you can expect your Dalmadoodle to be smart as well. Keep in mind that your Dalmadoodle could inherit any number of the temperamental traits listed above, and for this reason, we always recommend early socialization and obedience training.

The Dalmatian is a stately purebred with lots of confidence. This dog is famous for its looks as well as its brains. They are very loyal to their family and does well with dogs and children they are is raised with. However, they can be standoffish with strangers and, due to a guarding background, have a tendency to become territorial and protective, although not known to be an aggressive breed.

The Poodle is also best known for high intelligence, wowing their family with an incredible ability to learn tricks. This is a breed who loves showing off and is a natural entertainer. They do very well in family settings and enjoys other dogs. However, they do have a hunting background, so families who own smaller pets should not leave their Poodle in a room with them unsupervised.

The Dalmatian x Poodle is going to be an active crossbreed, considering he comes from two very active purebred parents. We recommend giving your Poodle and Dalmatian mix at least an hour or two of exercise per day. This could include a long walk, a nice romp in the yard and a game of fetch. Luckily, the Poodle x Dalmatian is intelligent, and training should be simple.

The Dalmadoodle lifespan could vary depending on what he inherits from his parent breeds. While the Dalmatian has a life span of 11 to 13 years, he is prone to certain health issues, including deafness, skin allergies, urinary stones, obesity, epilepsy, thyroid disease and eye issues.

The Poodle has a lifespan of 12 to 14.5 years and is prone to hip dysplasia, epilepsy, progressive retinal atrophy, Addison’s disease, thyroid issues, bloat and hypoglycemia. You may want to consider early health screening for your Dalmadoodle, as it could help you to prevent or prepare for certain inheritable health issues.

There is an ongoing debate regarding the health of purebreds and crossbreeds. It is a well-known fact that purebreds suffer from many generational health defects as a result of generations of overbreeding. Those who support crossbreeding are hopeful that the practice could be a solution to these genetic health issues.

The debate is ongoing and so are the studies. In the meantime, we think it’s important to learn as much as you can about any prospective dog you are considering bringing into your home whether he is a purebred or a mix breed dog.

The Ideal Home for a Poodle and Dalmatian mix

The Dalmatian Poodle mix is going to do best in homes with a large fenced-in yard where he can run and play, and in a home with an owner who is able to keep his intelligent mind active. This is a crossbreed who needs lots of stimulation both physically and mentally. If you are able to provide early socialization, the proper training and plenty of activity, then the Dalmadoodle may be the perfect dog for you.

If you are looking to get a Poodle Dalmatian mix from a breeder, expect to spend anywhere from $500 to over $1000. One good thing about getting a Dalamatian and Poodle mix puppy from a breeder is that you are able to ask questions about temperament and health issues with previous litters.

Also, keep in mind that most repeatable breeders will be able to provide health certificates proving their litters have been health screened. No matter which source you go through to get your Dalmadoodle puppy, remember to go through a reliable and responsible source. Dalmatian x Poodle puppies are beautiful and great fun, and if you go to the right breeder and raise them well you will have a great companion for many years to come.