You are here: Home / Breeds / Schnauzer Mixes – Which One Is Right For You? 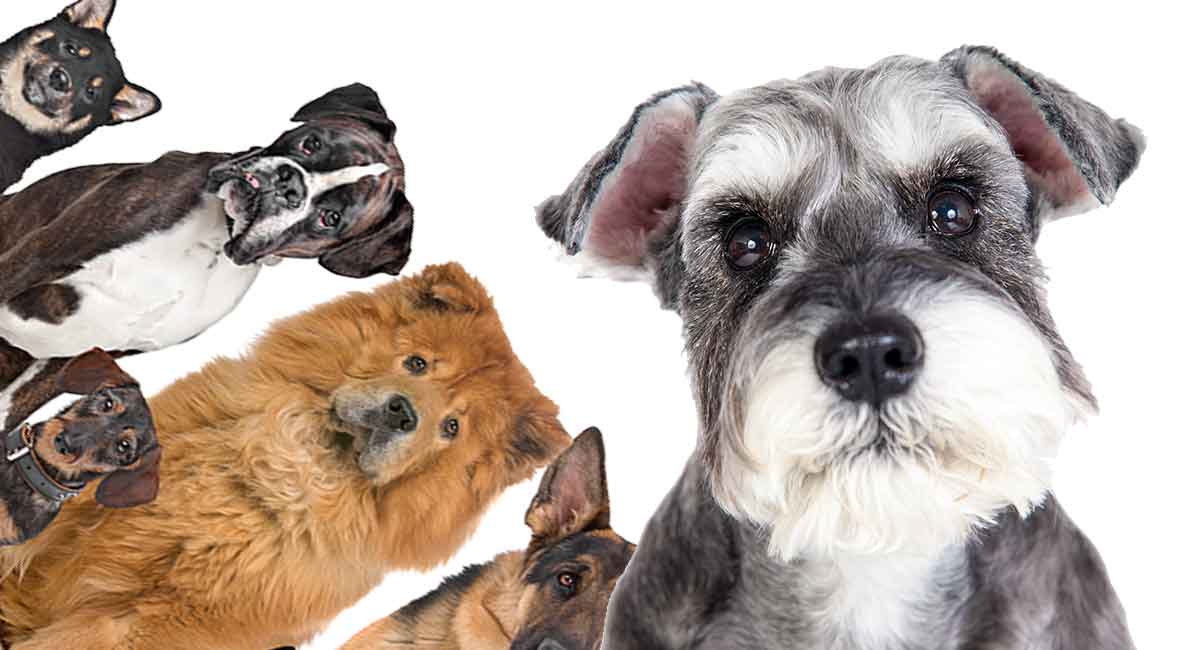 The Schnauzer is one of those classic purebred dog breeds that can almost introduce itself.

With this breed’s alert triangular ears and trademark moustache and mutton chops, the Schnauzer often appears to be a canine version of Yoda – wise, brave and calm.

The Schnauzer is an ancient and well-established purebred dog breed, which makes him a natural choice for hybrid or “designer” dog breeding programs.

In this article, you will meet the most popular Schnauzer mix breed dogs!

The modern Schnauzer is bred in three sizes: Giant, Standard and Miniature. The Standard Schnauzer came first, followed by the Giant Schnauzer  and the Miniature Schnauzer .

While on the way to becoming a recognized purebred dog breed in its own right, the Schnauzer was crossed with other purebred dogs, including the Poodle, Bolognese, Great Dane, Wolfspitz (Keeshond), and Affenpinscher.

The Schnauzer’s distinctive facial hair has always served a protective purpose, since these dogs were originally bred to hunt small yet fierce rodents like rats.

The Schnauzer has a double-layer coat consisting of a wiry, weather-resistant outercoat and a softer, finer insulating under-coat.

This coat won’t typically shed much, but does need frequent hand-stripping, brushing and grooming to retain its protective properties.

The Schnauzer is known as a friendly, fearless and intelligent purebred dog.

They have strong hunting and guarding instincts, and can make excellent family watchdogs.

One thing to know about this breed is that they get bored easily! Successful training will always be positive and varied.

Purebred Schnauzers of all sizes can experience some known genetic health issues.

The Giant and Miniature Schnauzers typically live 12 to 15 years. The Standard Schnauzer can live 13 to 16 years.

But hybrid dog breeding is a little different. A hybrid mix breed dog has two different purebred parents, such as a Schnauzer and a Labrador Retriever.

The modern practice of breeding so-called “designer” dogs is controversial. Yet the majority of hybrid breeders do so to help strengthen the gene pool for future generations of dogs while minimizing purebred genetic weaknesses and promoting strengths.

An ideal outcome is to produce a hybrid puppy that possesses better health, improved life expectancy, and a pleasing and trainable temperament.

If you have arrived here because you want information about a particular Schnauzer mix breed dog, this handy clickable list will get you to the right section quickly!

Now let’s see which appeal to you, and how many of their jazzy portmanteau names you can guess!

Also known as: a Schnauffen

The Schnauffen crosses an Affenpinscher with a Miniature Schnauzer.

With this cross you can expect a dog that weighs between 10 to 20 pounds and can live 12 to 15 years.

Your Schnauffen likely won’t shed much but will need regular grooming.

This dog will be smart and easy to train as long as you keep sessions interesting!

Also known as: a Schnairedale

The Schnairedale crosses an Airedale Terrier with a standard or Giant Schnauzer.

Your Schnairedale may shed depending on which parent your puppy takes after.

Regular grooming will be important to maintain this dog’s coat.

Your pup will be smart and quite trainable as long as you keep sessions lively!

Also known as: a Bowzer

This dog will have the shorter legs of the Basset but may have a smooth or a wiry coat.

Shedding can be profuse if your pup takes after the Basset Hound parent!

The Bowzer can inherit the Basset Hound’s stubborn streak but making training sessions frequent and fun will help.

Also known as: a Schneagle

A Schneagle pup will have one Beagle parent and one miniature or Standard Schnauzer parent.

This dog will weigh between 10 and 45 pounds depending on the Schnauzer parent’s size.

The Schneagle is likely to shed some year-round and will benefit from regular brushing.

This dog is going to inherit smarts and a strong hunting (prey) drive from both parents, so don’t let your Schneagle off-leash in an unenclosed space until your recall is par excellence!

Also known as: a Chonzer

The Chonzer crosses a Bichon Frise with a Miniature Schnauzer to produce a dog that weighs between 7 and 18 pounds and lives 12 to 15 years.

The Chonzer won’t shed much but will need lots of brushing and grooming.

This dog will benefit from regular daily play and exercise. Training is typically easy.

Also known as: a Border Schnollie

The Border Schnollie crosses a Border Collie with a Standard Schnauzer.

Expect your Border Schnollie to shed some and need plenty of brushing.

This dog will likely be high energy and benefit from regular “work” or participation in canine athletics.

Also known as: a MiniBoz

The MiniBoz crosses a Boston Terrier with a Miniature Schnauzer, producing a pooch that will weigh 10 to 20 pounds.

Your MiniBoz may shed some but not profusely.

The MiniBoz will likely inherit at least some of the flat-faced (brachycephalic) health issues associated with the Boston Terrier breed.

Working with a reputable breeder who looks for Boston Terriers with longer muzzles may help alleviate this.

Also known as: a Sniffon

The Sniffon crosses a Brussels Griffon with a Miniature Schnauzer. This pup will likely weigh 8 to 18 pounds and live 12 to 15 years.

The Sniffon will probably shed somewhat year-round and will benefit from very regular brushing.

Be aware that this dog is likely going to inherit some of the health concerns associated with brachycephalic (flat-faced) breeds like its Brussels Griffon parent.

Also known as: a Cairnauzer

A Cairnauzer is a puppy with one Cairn Terrier parent and one Miniature Schnauzer parent.

This pup will weigh between 13 and 20 pounds and have a life expectancy of 12 to 15 years.

The Cairnauzer’s coat requires the same type of hand-stripping and brushing maintenance as the purebred Schnauzer.

This dog will be brave and curious and may inherit a love of digging from the Cairn Terrier parent!

Also known as: a Chizer

The Chizer has one Chihuahua parent and one Miniature Schnauzer parent.

This is likely to be a tiny pup weighing less than 12 pounds. The typical life expectancy is 12 to 16 years.

A Chizer may inherit a short or longer single or double-layer coat. Regular brushing will be important for coat and skin health.

Chihuahuas are very fragile and prone to dental problems due to their small size. A very small Chizer might also inherit these concerns.

Also known as: a Schnocker

The adorably-named Schnocker crosses a Cocker Spaniel with a Standard or Miniature Schnauzer.

This dog may weigh anywhere from 11 to 45 pounds. The average life expectancy is 12 to 15 years.

The Schnocker may have a higher-shedding coat and will need regular brushing and grooming to prevent tangles.

These dogs will be smart and playful overall and will make excellent canine athletes.

Also known as: a Schnorgi

The Schnorgi crosses one Welsh Pembroke Corgi and one Miniature Schnauzer.

This dog may inherit the shortened legs of the Corgi parent and may shed some.

They are smart and trainable but may be stubborn.

Also known as: a Schnoxie

The Schnoxie has one Standard or Miniature Dachshund parent and one Miniature Schnauzer parent.

The Schnoxie will inherit the shortened legs associated with the Dachshund parent and may have varying coat types from smooth to wire-haired with minimal shedding.

This dog is going to be all personality and will likely be easy to train so long as the training is positive, varied and employs treats!

Also known as: a Schnese

A Schnese hybrid dog has one Havanese parent and one Miniature Schnauzer parent, putting this dog’s adult weight at around 7 to 20 pounds and lifespan at 12 to 16 years.

The Schnese won’t shed much but you may find you need to brush your dog daily, especially if your pup inherits more of the Havanese’s long flowing coat!

These dogs are typically eager and easy to train.

Also known as: a Schapso

The Schapso has one Lhasa Apso parent and one Miniature Schnauzer parent.

This dog will probably weigh 11 to 20 pounds and have a life expectancy of 12 to 15 years.

Your Schapso likely won’t shed much but expect daily brushing and grooming duties.

The Lhasa Apso can have mild brachycephaly (flat-faced muzzle type) which may affect your Schapso.

Also known as: a Lab Schnauzer

The Lab Schnauzer has one Standard or Giant Schnauzer parent and one Labrador Retriever parent.

This can be a sizable pup depending on the Schnauzer parent’s size, weighing 50 to 80+ pounds. Expect a life span of 10 to 15 years.

The Lab Schnauzer will be loyal, smart and very people-centric!

Also known as: a Mauzer

The Mauzer will have one Maltese parent and one Miniature Schnauzer parent.

This will be a small pooch weighing anywhere from 7 to 20 pounds. The life expectancy is 12 to 15 years.

You won’t have much shedding with a Mauzer but expect daily brushing duties!

Also known as: a Schnoodle

A Schnoodle will have one Standard, Miniature or Toy Poodle parent and one Standard or Miniature Schnauzer parent, producing a pup weighing 10 pounds to 80+ pounds.

This dog won’t shed but will need plenty of brushing.

The Schnoodle is going to be a smart dog, very trainable and people-oriented!

Also known as: a Schnug

A Schnug dog will have one Pug parent and one Miniature Schnauzer parent, putting this dog’s adult weight at 11 to 20 pounds.

Their life expectancy is 12 to 15 years.

You may see more shedding if your Schnug takes after the Pug parent.

The Schnug may also struggle with some of the flat-faced (brachycephalic) health concerns known to occur in Pug dogs.

Pugs are also prone to eye problems and spinal disorders due to their extreme body shape, which a Schnug puppy might inherit.

Also known as: a Snorkie

The Snorkie has one Yorkshire Terrier parent and one Miniature Schnauzer parent, putting this pup’s adult weight between 7 and 20 pounds.

You won’t have much shedding with this dog.

The Snorkie may inherit some of the health issues associated with the brachycephalic (flat-faced) muzzle type from the Yorkshire Terrier parent.

Is A Schnauzer Mix Right For Me?

We hope you have enjoyed meeting each of these unique Schnauzer mix breed dogs!

Schnauzers of all sizes have been a popular choice for lots of hybrid dogs today.

Schnauzers are typically a very healthy breed, and we believe it’s best to preserve that good fortune for future generations by avoiding Schnauzer mix puppies with conformational health problems from their other parent (for example a brachycephalic Schnug).

What are your thoughts on Schnauzer mixes?

Drop us a line in the comments if you already have one, you’re thinking of getting one, or even if you’re really not keen!