You are here: Home / Dog Facts And Fun / Miniature Great Dane – Is There Really Such A Thing? 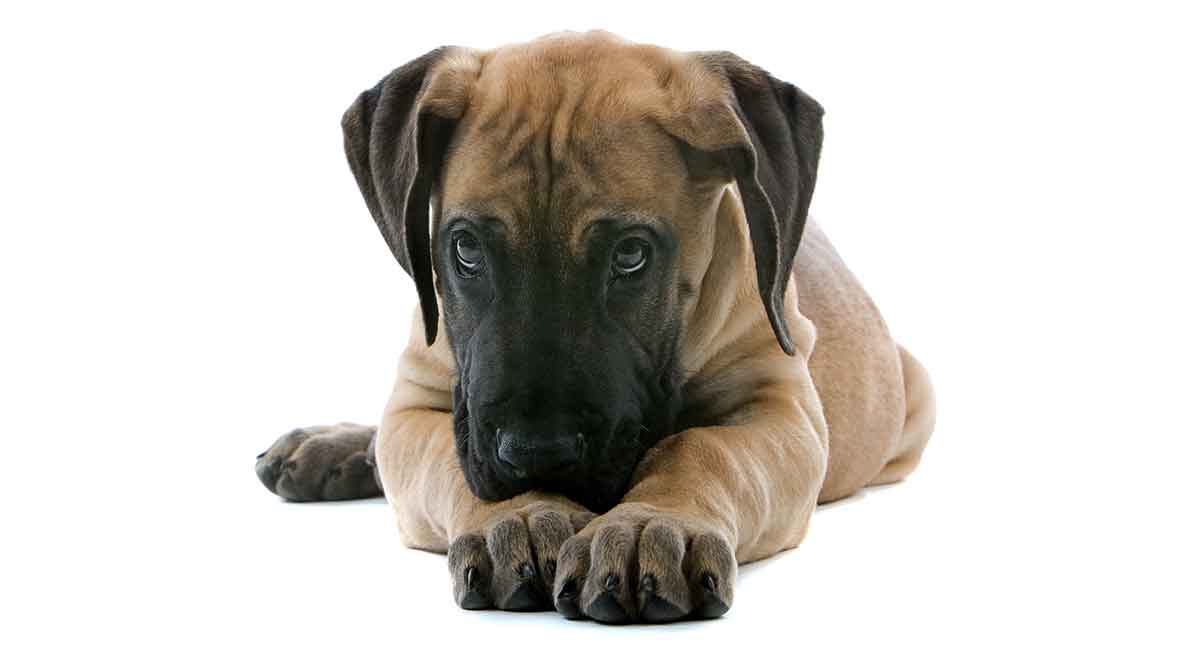 What could be better than a Miniature Great Dane?

Their big personality in a smaller more manageable package!

But are these scaled down pups still the real deal?

Let’s take a look at how to make a miniature Great Dane.

And whether any of the options are right for your next pup.

What is a Miniature Great Dane?

Miniature Great Dane is a name given to a pup bred in a smaller size.

They might be a purebred Great Dane who was runt of the litter.

Or one bred to have dwarfism, or simply from smaller than average parents.

it’s not an official breed, so it’s good to know what the options are before you go looking for these pups.

There is nothing miniature about the average Great Dane, that’s for sure.

So why do owners want a  shrunk down version?

Life with a Great Dane

Friendly, laid back, and reliable, the Great Dane is known as the “Apollo of Dogs.”

Both powerful and gentle, they have a sweet yet intelligent nature.

Their short, smooth coat comes in a number of colors and patterns.

Including the distinctive black-and-white pattern known as harlequin.

They make excellent, loyal companions for many families.

But their awesome size can be off-putting.

And not just to intruders.

Drawbacks of a Giant Dog

Due to their size they should always be supervised around little ones.

If only because they can accidentally knock them down.

Early socialization and obedience training are a must with a large dog.

You will need a great recall, and to prevent them jumping up.

So it’s understandable that some people would like a Great Dane in a smaller package.

There’s no doubt that there would be some advantages to having a miniature Great Dane.

Imagine a dog that had the character of a Great Dane, but didn’t take up the whole sofa.

One that could be driven in something smaller than a minivan.

Or live in an apartment.

Less drool and lower dog food bills have an attraction as well.

The problem is that whenever you change a dog’s size, there are other affects too.

How small is a miniature Great Dane?

Since Mini Great Danes aren’t officially a breed, there is no qualifying height.

A 27 inch tall dog could be called miniature, but he’d hardly be small.

In truth, there’s no standard size range for a miniature Great Dane.

So let’s look at why a breeder might described their pups as Miniature Great Danes.

How do you get a miniature Great Dane?

There are essentially three ways that breeders use to create a miniature dog.

The first is by mixing a large breed with a smaller breed.

In the case of the Miniature Labradoodle, a Labrador Retriever is mixed with the smaller Miniature Poodle breed.

The second way is to introduce the gene that causes achondroplasia, or dwarfism.

This works because it prevents their leg bones from growing to full size.

The Basset Hound and Dachshund are both achondroplastic breeds.

And the final way to create a line of miniature Great Danes is by breeding the smallest individuals.

So that their offspring gradually become smaller and smaller.

This is the approach breeders have taken to achieving smaller Great Danes.

What are the problems associated with miniaturization?

But to make a miniature Great Dane breeds would need to use runts.

Problems arise with dogs who fall way below the breed standard.

Sadly, unscrupulous and profiteering breeders will ignore these risks.

If they think they can command a high price for the puppies they will do it anyway.

Dwarfism comes with a lot of health issues attached too.

And requires mixing the Great Dane with a breed that carries this gene.

Every breed is vulnerable to certain genetic health issues.

Unfortunately, the lovable Great Dane has more than his share of potential problems.

The life expectancy of the Great Dane is just 7 to 10 years.

A Miniature Great Dane might actually have a lower chance of having some of their giant breed conditions.

But there is no way to tell at this point, as they are so newly created.

Pursuing small size over health also means that hereditary illnesses are likely to go unscreened-for and unchecked by breeders.

For the Great Dane, these could include.

Bloat and the Miniature Great Dane

Great Danes have a high risk of Gastric Dilation-Volvulus.

When the stomach expands with gas it puts pressure on the diaphragm and makes it hard for the dog to breathe.

If the stomach twists on itself, the blood supply will be severed.

This is an emergency situation and immediate surgery is often the only thing that will save the dog’s life.

There is a surgical procedure called gastropexy.

In this the stomach is affixed to the abdominal wall or diaphragm to avoid twisting.

Bloat is the number one cause of death of Great Danes and they’re more susceptible to it than any other breed.

However, this is partially due to their giant size.

If you cuold healthily create a miniature Great Dane it’s possible their predisposition would be lower.

The same goes for heart problems.

Giant dog breeds like the Great Dane are prone to dilated cardiomyopathy.

A heart condition believed to be genetically-based.

The heart is enlarged and congestive heart failure is very possible.

Tricuspid valve disease is a condition where the heart valve doesn’t work.

It’s a very common condition that accounts for approximately 75% of all heart disease cases in dogs.

Large breeds like the Great Dane are at a greater risk for hip dysplasia.

This chronic condition in which the ball and socket joint is malformed leads to arthritis.

Some puppies are born with it or it can develop with age.

The business of miniature breeding

Even the world’s smallest dog, the Chihuahua, has been scaled down to be teacup size.

A breeder might call it a miniature Great Dane because it sounds appealing.

But it is still misleading.

The final word on the miniature Great Dane

A dignified breed like the Great Dane is known for their regal stature.

Like many giant breeds, the Great Dane already has a short life span that is subject to a host of health issues.

It is possible mixing them with a smaller breed could improve some of these problems.

But we can’t recommend this if the breed it’s mixed with has dwarfism.

Breeding through runts of the litter is also a bad idea.

Two unhealthy dogs will breed unhealthy puppies in all likelihood.

For that reason we always recommend putting a puppy’s health first and foremost.

If you want a smaller dog then choosing a different breed is a good plan.

Whippets and Italian Greyhounds have some of the personality traits of the Great Dane in a smaller package.

What are your views on miniaturizing dogs?

Have you been tempted by a miniature Great Dane?

Would you still consider one now?

Join in the debate using the comments box below.

Perhaps you’d also like to take a look at the mini Labradoodle!