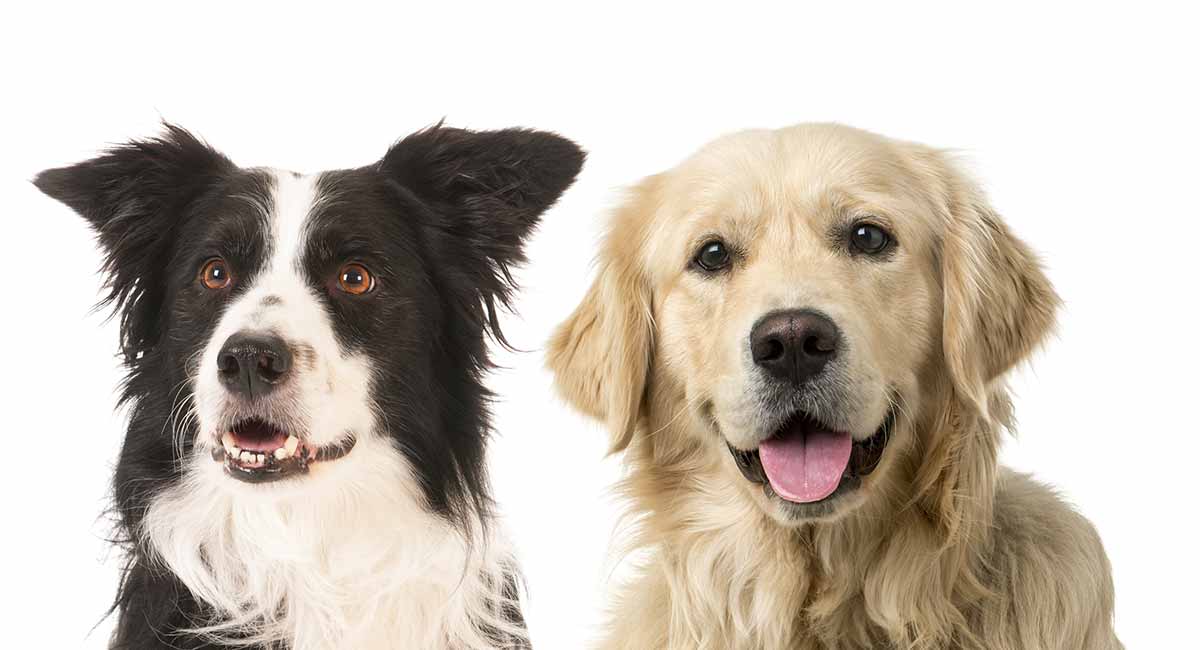 The Golden Retriever Border Collie mix is considered to be both a working and sporting dog.

Although they may have neither one nor the other.

This breed of dog, however, is considered a cross-breed or designer dog, although the exact timing of intentional breeding is unknown.

Some breeders of purebred dogs have objections to the designer dog trend.

What’s Up with Designer Dogs?

Breeders (reputable breeders, I should say) of pedigree dogs strive to maintain a lineage of healthy, genetically sound dogs with predictable characteristics.

Reputable breeders will test for genetic ailments that are inherent in the breed they work with.

They will not breed dogs who carry the genes for these issues, which allows for a healthier lineage.

If they don’t do this, however, as is the case with some breeders, they will allow these genetic issues to continue.

Those who are proponents for cross breeds or “designer dogs” insist that by spreading out the gene pool, less of these genetic ailments are present in the resultant pups.

Researchers at The Institute of Canine Biology have evidence that this logic is sound.

Purebred dog fans point to the fact that the pups are less predictable in appearance and temperament.

While this is true, it is not necessarily a bad thing.

The Golden Retriever is a beautiful dog that remains one of the most popular dog breeds in the United States.

It was first bred in the Scottish Highlands by Dudley Marjoribanks, the first Lord Tweedmouth.

He wanted a gundog suited to the rainy climate and rugged grounds; he crossed his yellow retriever with the now extinct Tweed Water Spaniel, including also a bit of Irish Setter and Bloodhound.

The result over years of breeding is the Golden Retriever, an intelligent and hard-working breed.

First recognized by the American Kennel Club in 1925, this breed hit its high, popularity-wise, in the 1970’s with President Gerald Ford and his Golden, Liberty.

A male Golden Retriever will stand 23-24 inches tall and weigh anywhere from 65-75 pounds.

Golden Retrievers are hardworking dogs in the sporting group.

They engage in hunting and field work, are employed as guides for the blind and therapy dogs, as well as search and rescue missions.

As pets, they are loyal and loving, generally good with children and families, and often get along with other pets.

The first few years of a Golden’s life, the puppy through adolescent stage, they tend to be rambunctious and need plenty of exercise and stimulation.

Touted as the world’s greatest herding dog, no one could argue the point when they see a Border Collie in action.

With their crouching stalk and quick bursts of speed, sheep don’t stand a chance of escape from these dogs.

Because of a Border Collie’s high intelligence, they must be stimulated, even if they are simply house pets.

A bored Border will find something to do and it may not be something you appreciate!

They need a lot of exercise as well as plenty of toys to choose from, especially puzzle-type toys.

Border Collies are affectionate and loyal, bonding strongly with their human family members, but may be wary of strangers.

What About the Golden Retriever Border Collie Mix?

The Golden Retriever Border Collie mix can get any of the parent breed’s attributes.

They will be anywhere in the size range of either parent.

They can have any mix of attributes from either the Border Collie or Golden Retriever.

Golden Border Collies can be golden, red, white, or black and white.

Their coat is medium length, very dense, and wavy.

Golden Border Collies can have the temperamental aspects of either parent dog, giving them high intelligence, high energy, strong bonds with their families, and sweet dispositions.

What About Health Issues?

Golden Retrievers can be prone to hip dysplasia as well as elbow dysplasia.

The AKC recommends testing this breed for these conditions as well as a cardiac exam and ophthalmologic exam.

Goldens can have eye conditions such as juvenile cataracts, pigmentary uveitis, and progressive retinal atrophy.

They can also have heart conditions such as subvalvular aortic stenosis.

Sadly, Golden Retrievers are very prone to cancer, which is a big concern to most potential dog owners.

Both Golden Retrievers’ and Border Collies’ ears should be checked for infection and cleaned regularly.

The Golden Retriever Border Collie mix has the possibility of inheriting any of the health conditions of the parents, particularly those that are shared by both parents.

They tend to shed a lot so this weekly brushing will help keep your house from growing a coat of dog fur.

Excessive bathing is not recommended as it could dry their skin out.

Bathe when visibly dirty or after swimming.

Both Goldens and Border Collies are intelligent and trainable.

A Golden Border Collie will do best with focused training.

They are also very agile dogs and would do well with agility training as an outlet for their high energy.

They do require a lot of exercise so it’s best if they always have a “job” to do.

Don’t, however, think you can give your Golden Border a broom and tell it to sweep the hardwood.

A job for this type of dog could be a puzzle toy or selection of toys, going through agility courses, or simply a long walk or jog.

They also love games like fetch and frisbee. Impress your friends by teaching your pup to catch a frisbee!

Is a Golden Retriever Border Collie Mix Good for Families?

Absolutely! These dogs are friendly, loyal and have sweet dispositions.

They are good with children and other pets.

Because they require a lot of attention, they would not be well suited in a home where no one is home all day.

If your lives are busy to the point that the dog would have more than 6 hours of alone time, these dogs may not be for you.

They are eager to please and will greet you happily when you return home, whether you were gone for five minutes or two hours!

They are great at alerting the presence of strangers at the door, but the Golden Retriever in them has never met an enemy.

They may not be the best protectors but as an alarm system they are top notch!

Where Can I Find a Golden Retriever Border Collie Mix Puppy?

Breeders of these dogs can be found online but be sure to check out their practices.

Good breeders will test their breeding stock for the genetic conditions that are common in each parent breed.

They will take care of the first veterinary visits for the puppies and the first round of shots.

The puppies will need to be dewormed.

Good breeders will issue a health certificate, encouraging you to bring your new puppy to your vet and will honor their commitment to your puppy’s health.

Golden Border Collies are gorgeous dogs whose beauty is nearly outmatched by their brains and temperament. They are good family dogs and get along with most everybody.

They are easily trained and up for almost any activity.