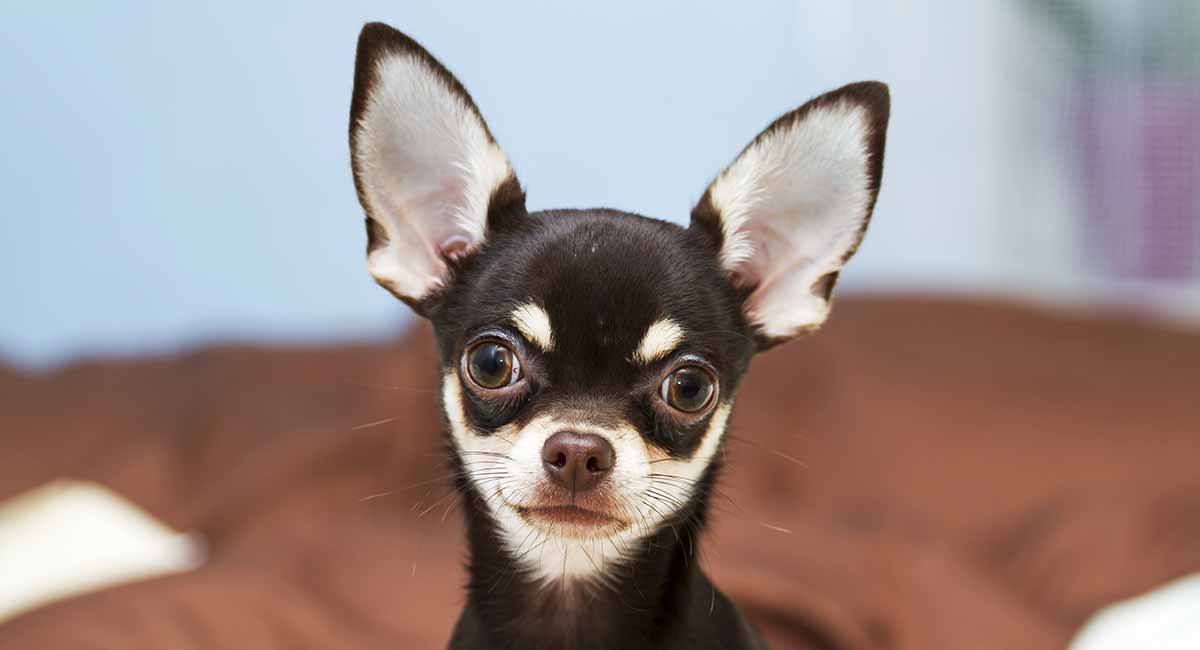 The black and white Chihuahua is living proof that you don’t have to be a big dog in size to be a huge dog in personality.

Chihuahuas are an ancient dog breed descended from the Toltec Techichi dog.

That was a petite pup that lived in Central Mexico as far back as the 9th century.

However, despite this ancient history, the Chi, as some fans call this breed, only first became hugely famous when a certain well-known heiress socialite began carrying hers around in her purse, in the process giving birth to the term, “handbag dogs.”

But the Chihuahua as a purebred dog breed is so much more than a celebrity sidekick or a social accessory.

For example, did you know the Chihuahua, which typically weighs six pounds or less fully grown, has the largest brain-to-body size of any canine?

In other words, this is one smart pup!

But one of the most visually stunning is the black and white Chihuahua.

It tells us that the black and white coat color is recognized yet nonstandard for the purebred Chihuahua.

What does this mean, precisely?

If you aspire to participate in purebred dog shows, your black and white Chihuahua will be permitted in the show ring as a contestant as long as all the other breed standard qualifications are met.

So how does a black and white Chihuahua come to have this coat color pattern at all?

What do puppies need? Click here for your new puppy checklist!

Once you start delving into the genetics of dog breeding and coat color, things can get complicated fast!

Chihuahua dog breeders can literally spend a lifetime studying coat color genetics and still find there is more to learn.

Here in this article, we will focus on sharing the black and white Chihuahua coat color basics.

This is true for the Chihuahua as well as for every other purebred dog breed.

So essentially, every single other coat color, including the Chihuahua white and black coat color pattern, comes from how these two black and red basic coat colors interact and combine with other genes to create the adult coat appearance.

Now, you are likely wondering how a Chihuahua black white color pattern is possible with only two coat colors!

This is where canine coat color genetics starts to get really interesting.

Each of the two basic coat colors can be modified or diluted by the influence of their fellow genes.

So for instance, black can be diluted to look like liver (brown), blue (gray) or Isabella (a pale brown/silver).

Red can be diluted to create colors ranging from light wheat and cream to deep red and rich brown.

Of course, the next logical question is where does the white coat color come from.

White is actually not a coat color at all but rather an absence of all color.

White areas of the coat are when neither the black nor the red genes are being expressed.

Sometimes the white color you think you see isn’t a true white, however, but a pale cream or ivory.

In these cases, the “white” areas are actually a very dilute version of the primary red coat color.

When alternating with the basic black color, they produce a black and white Chihuahua coat.

So now when you see a black and white Chihuahua, you will know about its coloring.

The black hairs are caused by the basic black coat color.

On the other hand, the white hairs are caused by the absence of a pigment-creating gene.

What Causes a Black and White Spotted Chihuahua?

The genetic basics are now out of the way.

Let’s turn our attention to the actual pattern of black and white Chihuahua coat colors in more detail.

For instance, what kind of genetic activity creates a black and white spotted Chihuahua?

There are a variety of additional genes that can influence how the two basic colors show up in a Chihuahua’s coat.

The spotted coat color is caused by the S locus (spotting) gene.

This gene is so interesting.

It produces a variety of coat patterns featuring random spots of white alternating with one or more other coat colors.

Because the gene works randomly, it is likely no two white-spotted Chihuahua coats will ever look exactly alike.

It does this by turning off the black or red genes that would have normally appeared in those areas.

These areas will turn white instead.

What About a Black and White Long Haired Chihuahua?

You may not yet know that Chihuahuas can have short or long coats.

But underneath the visible differences in coat length and hair texture, the same basic coat color genetics are at work.

The size of the Chihuahua doesn’t have anything to do with the colors of a Chihuahua’s adult coat.

That is all left up to the color genes and their modifiers.

Particularly confusing for many aspiring Chihuahua owners are the terms “apple head” and “deer head.”

Certainly all Chihuahuas have a dog head, right?

It specifies that a well-bred Chihuahua should have a head shape that resembles a rounded “apple dome.”

(Archaeological evidence proves both head shapes, deer and apple, were present in the earliest Chihuahuas).

So then what does the deer head shape represent to modern Chihuahua enthusiasts?

A Chihuahua with a deer head shape has a longer muzzle and slimmer skull that is not domed.

They are regarded by purebred dog breeders as being a less-favorable example of the breed.

The breed standard does not specifically disqualify a deer head Chihuahua from competing in shows.

However, judges consider this head shape a serious conformational fault.

The apple head shape with the very short muzzle is an example of a brachycephalic muzzle.

Brachycephaly is nearly synonymous with Chihuahuas and many other popular pure breeds that have pushed-in, flat faces.

This muzzle shape may look cute, but it can generate serious life-limiting health issues for the dog.

Common health issues linked to this muzzle shape include:

In terms of coat color genetics, however, the main fact to remember here is about head shape and coat color.

Whether apple- or deer-headed does not impact whether or not a puppy will grow up to have a black and white Chihuahua adult coat.

One question aspiring black and white Chihuahua owners often have is whether coat color has any influence on puppy temperament.

Research to date has confirmed a link between coat color and temperament only in the purebred English Springer Spaniel.

(All-black and parti-color dogs were shown to be less aggressive than golden-coated dogs.)

This particular research study investigated a number of other purebred dog breeds besides.

However, researchers cited no further confirmed links between coat color or pattern and temperament traits in the black and white Chihuahua or any other dog breeds.

Black and White Chihuahua – Is This Dog for You?

If you are looking for a petite pup who struts this unique coat color with confidence and flair, a black and white Chihuahua dog might just be your perfect match!

You will want to find one with the deer head shape to avoid the health problems caused by brachycephaly.

Let us know in the comments below if you have one of these adorable pups!

Fessenden, M., “Geneticists Figured Out How Animals Get Their White Spots,” Smithsonian, 2016.