You are here: Home / Breeds / Mix / Boxweiler – Pros and Cons of the Rottweiler Boxer Mix

The Boxweiler is a strong, smart dog with an active and bold personality. A mix of two large dog breeds, this is a big dog that can reach up to 100 lbs. They might take up a lot of space, but they also give a lot to their families in terms of love and loyalty. Today we are going to take a look at the pros and cons of bringing home a Rottweiler Boxer mix puppy. And help you to decide whether a Boxweiler is the right dog for your family.

The Boxweiler is a mixed breed dog with one Rottweiler parent and one Boxer dog parent. They are usually bred as pet dogs, but also have a rich working history on both sides of the family. Despite the popularity of the two parent breeds, the Boxweiler cross breed itself was not established until the 1980’s!

The Rottweiler’s origin is somewhat muddled, without clear records. It is thought to have descended from the Drover dogs of ancient Rome. It is likely that the Roman army brought the Rottweiler’s ancestors into Switzerland and Germany. Here they are thought to have mixed with local breeds such as the Bernese Mountain Dog and the Appenzeller.

Although evidence of this breed dates way back to the 1600’s, the first official breed standard was not produced until 1901. It was added to the American Kennel Club registry in 1931. The Rottweiler is a working dog, used throughout history for bear hunting, police work, cattle herding, and even to pull carriages for passengers.

The Boxer breed originated in Germany in the 1600’s. It is descended from the Tibetan line of Mastiff (which in turn was a descendent of the Molossus). Their name is thought to have originated from the breed’s fighting style, which uses its paws in a way some view as similar to a human boxer.

The Boxer gained popularity in Europe throughout the 1800’s, and was officially recognized by the American Kennel Club in 1904. Today, it’s ranked in the top 10 most popular dog breeds.

The Boxweiler is a large dog with a strong, muscular build. A full grown Boxweiler will typically weigh between 60 and 80 pounds – although reaching up to 100 lbs is not unheard of. They are typically happy, healthy pups with an average lifespan of 8 to 13 years.

The Rottweiler has a stocky, muscular body, while the Boxer has a lean, muscular build. A Boxweiler could take on either of these body types, or somewhere in between. Again, it’s important to remember that you won’t really be able to predict how a mixed breed dog will look. If you can meet the dog’s actual parents, that will help. But you still won’t know which characteristics will be dominant in your pup.

The Boxer Rottweiler has a short, thick coat with a somewhat harsh texture. Their colorings vary, but are almost always a shade of brown. Mixed brown and black spots are also possible. And they will sometimes have a white splotch on their chest or belly.

Boxweilers are moderate shedders and should be brushed about 2-3 times per week. Although they are short haired, they can still shed quite a bit all year round. This breed requires moderate grooming in order to keep its rough coat in good shape. 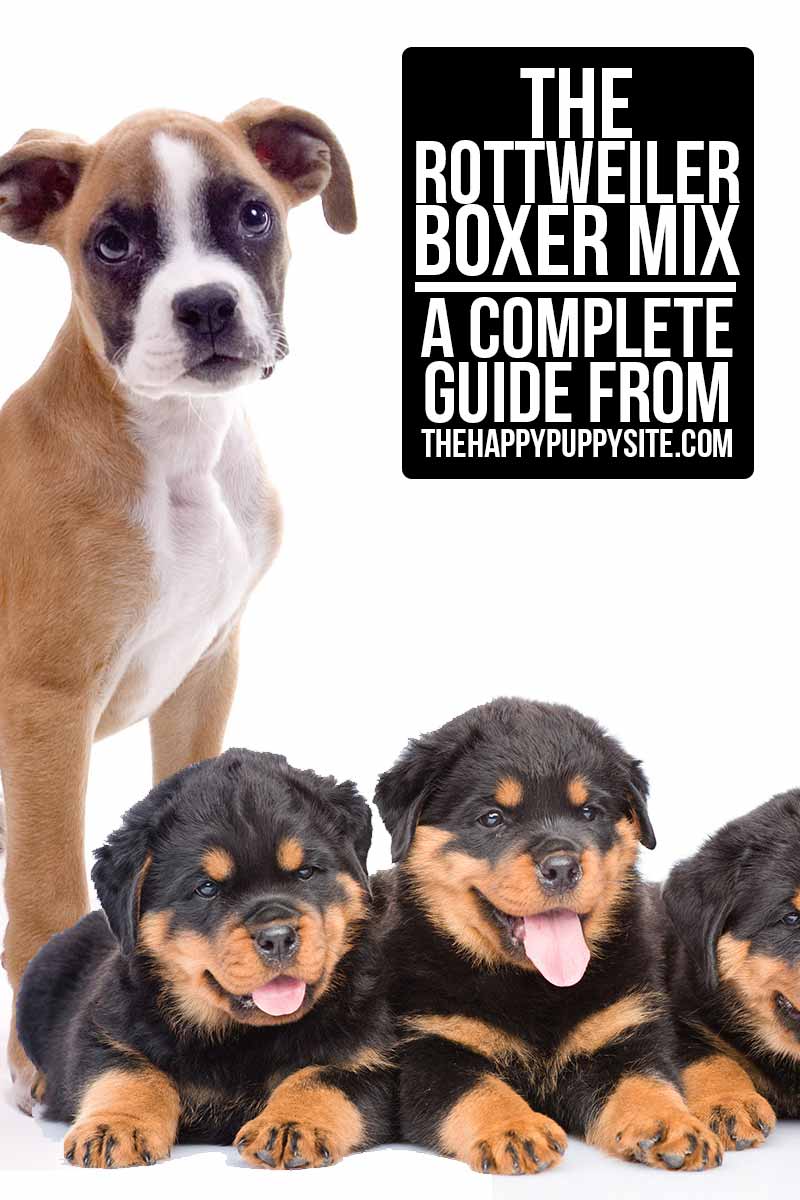 The Boxweiler is an active, happy dog. Full of energy, these pups are highly intelligent and loyal. They are typically friendly, but can get quite protective and will keep a close eye on strangers. Boxweilers are working dogs, so they tend to enjoy having some sort of role to fill. Whether that’s protecting the family or working as a police dog, Rottweiler Boxer hybrids have a deep sense of duty, loyalty, and love to any given job.

Rottweiler Boxer mix dogs are loving and affectionate, and enjoy human interaction. They are moderately dependent – meaning that they can be left alone, but they are prone to separation anxiety if left on their own for long periods of time. Boxweilers are usually good with other dogs, although early socialization is key. They are very good with children, so long as they are socialized properly.

The Rottweiler Boxer mix is a byproduct of two highly energetic, working dog breeds, so it’s no surprise that these dogs have some serious energy! Boxweilers need to be walked at least twice per day. And ideally should have a fenced yard to run around in.

They enjoy playing with other dogs, so long as they are properly socialized and not aggressive. These massive dogs also tend to gain weight if they don’t get enough exercise. It’s important to monitor your dog’s weight and increase exercise and/or reduce food if you notice unhealthy weight gain.

The Boxweiler is overall a fairly healthy breed, but that’s not to say it’s not prone to some potential health problems. A Boxweiler puppy can take on any of the attributes – positive or negative – of either parent.

Since both breeds have a tendency for heart problems, this should be one of the primary concerns for new Boxweiler parents. Several heart conditions are possible, but the most serious is probably Arrhythmogenic right ventricular cardiomyopathy. A condition that can be fatal.

Weight gain is another common issue with this breed. Rottweiler Boxer mix dogs can put on weight quickly. If not exercised enough or if overfed, they can become overweight.

There is an ongoing debate over the ethics of “designer dogs” such as the Rottweiler Boxer mix. Some claim that pedigree, purebred breeds are superior due to their consistency and predictability.

On the other side of the aisle, many breeders and fans of the crossbreed claim that there are significant benefits to designer dogs. There are some legitimate potential health issues with purebred dogs. These are often caused by years of inbreeding – which can sometimes be reduced through cross breeding.

Cross breeding advocates claim that there can be some benefits to genetic diversity in dog breeds. Often pointing to the “hybrid vigor” phenomenon as evidence. No matter which side you take, it’s good to remember that every dog was crossbred at some point in history, whether intentionally or not.

Ultimately, it all comes down to the breeding process, the knowledge of the breeder, and the genetics of the parents. Certain cross breeds are prone to specific behavioral and health issues, but the same could be said for certain purebred dogs. Thus, it’s very important to do your research before selecting a breed.

If you’re looking at Rottweiler and Boxer mix puppies, it’s important to consider whether or not your home will be ideal for this breed. The biggest consideration is the energy level of these dogs. Boxweilers need regular exercise, at least twice per day. They also should have plenty of space to move around, so a small apartment is likely not suitable for this breed.

Beyond that, consider the fact that Boxweilers are prone to separation anxiety. If you work long hours and will need to leave your dog alone all day, this breed is probably not going to be the best choice. Overall, the Boxweiler is a friendly and social breed.

They are great with children, so long as they’re properly introduced and socialized. Boxweilers are protective without being overly aggressive. They can make very good guard dogs and will not hesitate to protect your family should the need arise. Prospective Boxweiler parents should weigh the pros and cons of the breed – including potential health problems – before making their decision.

If you are searching for boxer and Rottweiler puppies, it’s very important to seek out reputable Boxweiler breeders. An experienced breeder will know the proper techniques for breeding healthy, happy dogs. They will likely test the parents for potential health problems, which helps to reduce the risk of health concerns in the puppies.

When you locate a breeder, ask to see any health certificates or test results that they have for the parents. Ask to meet the parents so you can get a better idea of what your new puppy’s temperament might be like. If you can’t find a breeder in your area, you can look for a rescue dog from a local shelter. We wholeheartedly encourage adoption – but, it’s very important to be aware of the potential downsides.

The main issue with adopting a dog is that you just don’t know what it’s been through. It could have been treated poorly or abused, which could translate to aggression or unwanted behavior. With that said, every dog deserves a good home. If you are willing to adopt and accept the risks, we encourage it. If you’d prefer to get a puppy to train it from a young age, be sure to seek out a reputable breeder.