You are here: Home / Uncategorized / Shar Pei Temperament – Is This Dog Right For Your Family? 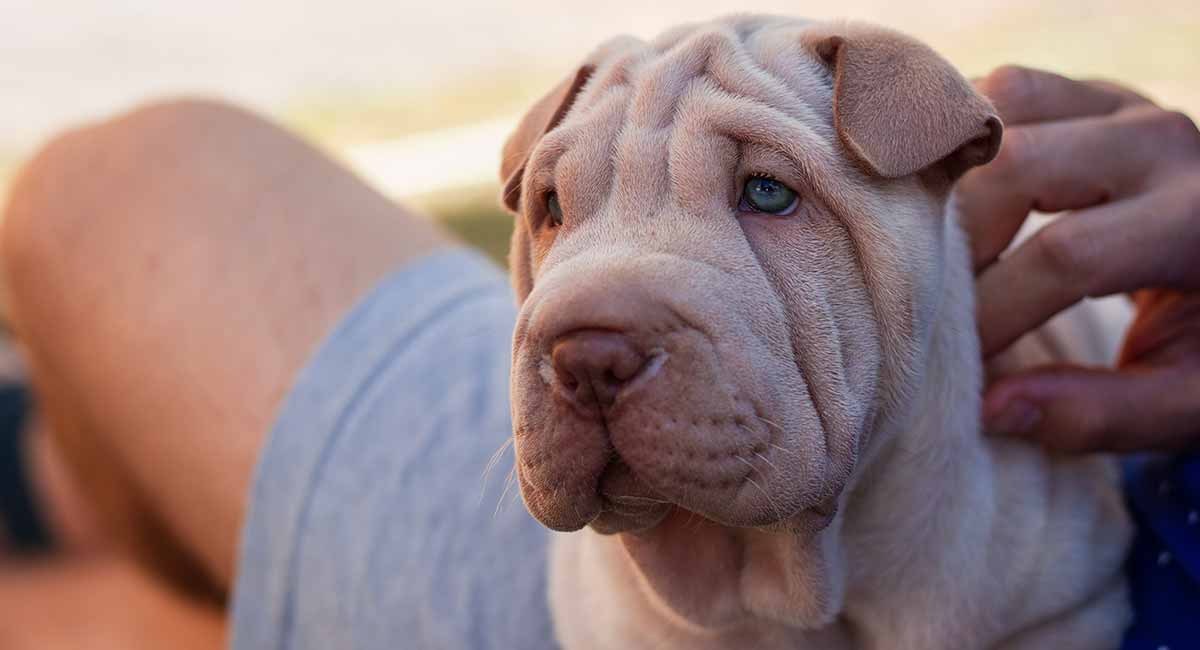 Shar Pei temperament: Are you wondering about the character hidden beneath the loose skin of these distinctive dogs?

The wrinkled dog with the ancient Chinese pedigree is sure to make a lasting impression on anyone who sees him.

But before you make a decision about this breed, it’s important to understand how their origins have shaped their view of the world.

In this article we’ll take a close look at the temperament and personality of the Shar-Pei so that you’ll know if this dog is a good fit for you.

The Shar-Pei is a curious fusion of unusual physical characteristics.

As if the broad “hippopotamus” head, small sunken eyes, blue-black tongue, and scowling expression weren’t unique enough, this dog’s sandpaper-like skin covers him in folds that fit like a bulky coat.

The Shar-Pei is a medium-sized and sturdily-built dog who stands from 18 to 20 inches and weighs between 45 to 60 pounds.

Almost as unique as their appearance is their long and singular history.

Origins of the Shar-Pei

Like the Chow Chow and the Pug, the Shar-Pei is a distinctly Chinese breed. The Shar-Pei’s origins date back more than 2,000 years to the Han Dynasty.

This intelligent, rugged canine was believed to have been a peasant’s dog. This accounts for his versatility and ability to take on various roles over the years including: hunter, herder, guard dog, and pit fighter.

When the communist regime took over China in 1949 they slaughtered much of the dog population. Luckily, a few of these dogs survived in Hong Kong and Taiwan.

When the breed was nearly facing extinction, a 1971 magazine article featured a photo of the Shar-Pei.

It described the dog as “one of the last surviving specimens of the breed.”

This caught the attention of a Hong Kong breeder named Matgo Law who wrote a letter to the magazine and urged Americans to save the breed.

Despite his hard-working history and turbulent past, today’s Shar-Pei is primarily a loyal and beloved companion.

Calm and confident, the Shar-Pei is an intelligent and independent animal.

However, they’re known to be dominating and may have a stubborn streak.

They’ve also held onto their fighting fierceness. This can lead to aggression towards both people and other dogs.

Needless to say, this is a breed who needs to be socialized and trained early to avoid becoming dangerous.

Although they’re not typically prone to barking, these dogs can make other loud noises.

Snoring, snorting, grunting, and grumbling are in their catalog of sounds.

Are Shar-Peis Easy to Train?

Training can go either way with this breed.

On the one hand they’re extremely intelligent, but they can also be very willful and want to do things their own way.

Consistent, positive reinforcement that uses plenty of treats and praise is the best way to get your Shar-Pei to see things your way.

Using harsh words or punishment won’t get you anywhere and could even trigger aggression.

Early socialization, that exposes your puppy to a wide variety of experiences, people, and other pets in a controlled and pleasant environment, has proven to play a large role in the development of a well-adjusted adult dog.

When it comes to potty training, the Shar-Pei is known for practically training themselves.

That’s because they’re a naturally clean dog who will instinctively not want to soil their living environment.

Friendly isn’t a word normally associated with the Shar-Pei breed.

They can be loyal and devoted to their family, but are generally aloof with strangers. The Shar-Pei is known for singling out one family member and making that person their own.

Due to their history, the Shar-Pei has a natural instinct to protect their home and family. For this reason they make excellent watchdogs and guard dogs.

Socializing them early is the best way to discourage any territorial behavior.

This is not a breed normally recommended for a family with children; especially little ones. However, if he’s raised with children from a young age it will be less of a problem.

That being said, children also need to be taught how to approach a dog and to steer clear if they’re eating or sleeping.
Even very friendly dogs should always be supervised around young children.

These are dogs who will be devoted to their owners and often forge a very tight bond with one family member in particular.

Their instinct to protect can kick in if they sense the slightest danger to their loved ones.

Even an unusual sound or an unfamiliar person can cause them to react.

This makes them excellent guard dogs, but they can be overly defensive if not properly socialized and trained.

Because of the Shar-Pei’s pit-fighting past, he may become aggressive in defending himself.

In fact, poorly socialized dogs can be downright dangerous. One study found the Shar-Pei to be very aggressive
Generally this aggression is directed towards other dogs, especially if they’re of the same sex.

His standoffish demeanor and natural suspicion of people he doesn’t know can also be interpreted as aggression.

Ensuring your dog is getting enough exercise can go a long way in reducing unwanted behavior. Moderate activity can sometimes be enough to burn off energy that could otherwise result in aggression.

Alternatively you could give this intelligent dog a job to do. Whenever he performs the tasks you’ve assigned him correctly, make sure to reward him.

This 2016 study shows that poor health can also affect fear and aggression in dogs.

Unfortunately, the Shar-Pei is a breed with a multitude of genetic health concerns.

Shar-Peis and Their Wrinkles

Regrettably, the physical characteristics that make the Shar-Pei so distinctive also cause the breed some serious health problems.

At one time their thick, loose skin served a practical purpose. It would allow them to keep fighting while being attacked by another dog.

However, the original Chinese Shar-Pei is far less wrinkly than the American version we see today.

That’s because when the breed became popular some breeders enhanced their excessive wrinkles and thickened the skin without regard for the dog’s well-being.

Their faces, in particular, now have increased folds so that the eyes are almost completely obscured.

The aforementioned  increased number of folds can lead to numerous eye conditions including the following:

Distinguishing features of Shar-Pei fever include recurring fever and swelling of the hocks. It also causes liver and kidney failure. This affects an estimated excess of 20% of these dogs.

As if this weren’t enough, the Shar-Pei’s flat muzzle makes them a brachycephalic breed which can cause serious breathing issues.

The Shar-Pei is not a dog who likes to hang out with his own kind.

For that reason, bringing them into a home with another dog can lead to trouble.

Cats and other small animals won’t fare much better as the Shar-Pei’s hunting instincts can kick in and cause them to chase and grab any creature that tries to get away.

Properly socializing a Shar-Pei from a young age can prevent the assumption that all other dogs are a threat.

Taking your puppy to the dog park or obedience classes are good ways to expose them to a variety of other breeds.

However, this is never going to be a dog who’s crazy about other canines in his face or his space.

Although the Shar-Pei is essentially calm, cool, and confident, they retain their fighting instincts and won’t back down when confronted.

Remember, their famous loose wrinkled skin enables this dog to continue fighting, even while another dog attacks.

Early socialization is essential for the Shar-pei. Aggression towards other dogs, and in some case strangers, is not uncommon in this breed.

Their instinct to guard can make him an excellent watchdog. However, it’s important to teach your Shar-pei that not every person he doesn’t know is a threat.

Shar-Peis also have hunting and herding in their heritage. As a result they may try to chase and catch smaller animals.

The Shar-Pei can be a loyal companion. Proper socialization can result in a calm and confident dog.

However, there are certainly some things you should consider before bringing this dog into your home.

Children, other dogs, and pets of any type, will not be a good mix with the Shar-Pei.

These dogs simply have too many aggressive and protective tendencies.

The breed’s long list of hereditary health problems is perhaps more concerning. Owners can expect expensive trips to the vet.

If you have your heart set on a Shar-Pei, choose an adult dog from a shelter rather than getting a puppy. This allows you to see what kind of dog you’re getting.

Do you have a Shar-Pei? Let us know about your dog in the comments below!

Make sure you also take a look at the bear coat Shar Pei!