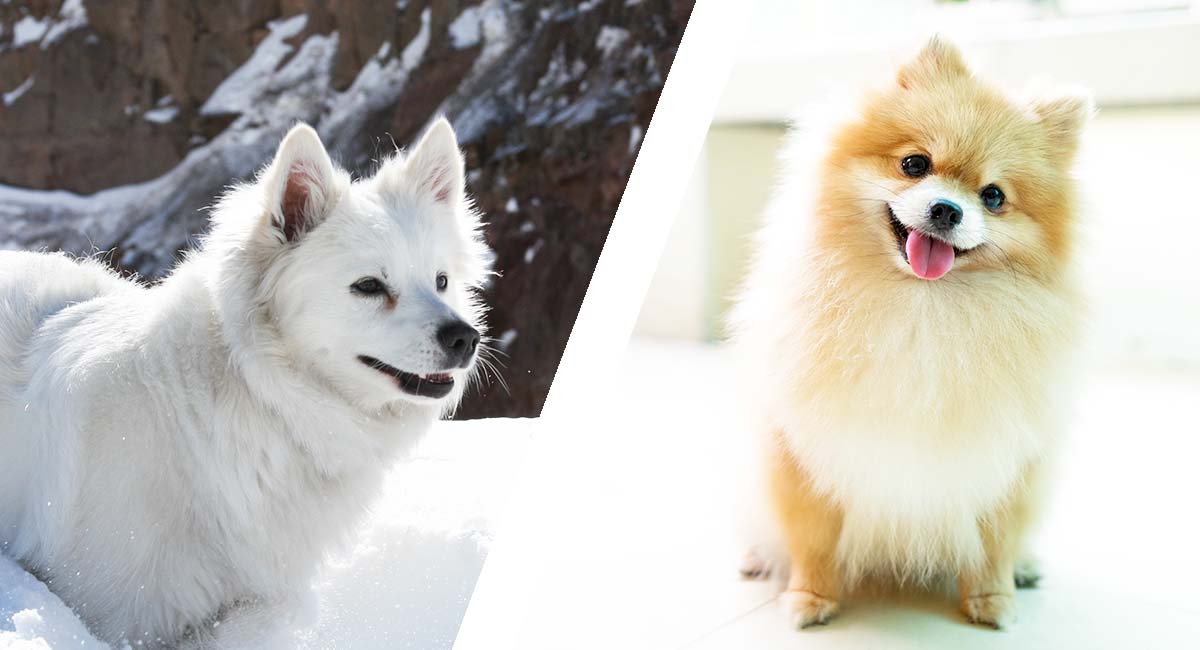 Looking for the goods on a sassy puff of fur called the American Eskimo Pomeranian dog, or Pomimo?

The Pomimo, sometimes also called an Eskiranian or Eskipom, is what breeders refer to as a hybrid, a puppy that comes from two purebred parents. The parents of the Pomimo are the Pomeranian and the American Eskimo.

Coming from popular breeds like the Pomeranian and American Eskimo, it is possible that the Pomimo is as well liked as the parents, but just not as well-known. The tiny size and full, thick coat give the Pomimo a look that is similar to both parents but unique at the same time.

What other important information do you need about the poofy little Pomimo?

The Pomimo is a First Generation Breed

First generation breeds like the Pomimo bring with them controversy, much of it unwarranted. Carol Beuchat, Ph.D. explains that there are many misconceptions about hybrids, but it is essential to understand what is true and what is false before deciding on a mixed breed dog.

It is important to keep in mind that first generation breeds come from two purebreds and that is a bit unpredictable. The puppy will inherit certain traits from each parent but it is impossible to know which ones.

Purebred species often interbreed to avoid changing the genetic code and that leads to health concerns, some of them quite serious, like hydrocephalus.

Crossbreeding is a process that can cause genetic mutations and inherited diseases. It is possible the puppy of two purebreds may inherit those diseases as well. There is just no way to know what will happen when it comes to designer breeds.

A responsible breeder will look for health conditions that can affect the pup before breeding, but that isn’t full proof. The parent could pass a recessive gene, too, so the breeder might not be aware of a potential problem.

A Little History About the Pomimo

It’s not clear when the little Pomimo first hit the market, but designer breeds have been in circulation for decades. The parents of the Pomimo, however, have a rich history. The toy dog Pomeranians are a favorite of Royal families and were often a companion for Queen Victoria.

The American Eskimo got its start- oddly enough- in Germany. Initially called the German Spitz, it was renamed American Eskimo to counteract the anti-German sentiment in the world at the time. It is possible, though, that this breed of dog could trace back as far as the Stone Age. Similar remains have been found dating back to that time in a number of countries.

What does The American Eskimo Pomeranian Mix Look Like?

For one thing, they may be very tiny. Small stature is a signature feature for the Pomeranian, which averages between 6 – 7 inches in height. There is more variety of sizes in the American Eskimo dog, though, so there are no guarantees how big the Pomimo puppies will grow.

American Eskimo dogs fall into one of three categories for size:

On average, a Pomimo may be bigger than a Pomeranian but smaller than an American Eskimo. Their weight can run from 10 to 17 pounds depending on the size of the parent, but it is hard to know for sure.

Both the Pomeranian and the American Eskimo fall under the category of Spitz dogs, known for their long, thick fur that is sometimes solid white, pointy ears, and muzzles. There is no guarantee that a Pomimo puppy will be solid white, though. They do come in a variety of colors such as:

Some are a combination of colors. There is no way to know what color a puppy will be and, often, there are mixed colors within a litter.

Coat length can range from medium to dense. With straight, thick hair as a primary feature, you can expect these puppies to shed a lot.

Since the puppy inherits characteristics from both parents, temperaments can vary. Both the Pomeranian and the American Eskimo are said to be intelligent dogs with perky dispositions. Pomeranians are known for being protective of their human family while American Eskimos are more social.

Pomimos also tend to watch out for their families so they may be territorial around people and dogs they don’t know. You can expect them to probably bark at strangers.

Since both parents may be active and excitable, their offspring can have those same characteristics. They can be happy dogs that orient well to families and children, and are loyal just like their parents.

That high level of intelligence can make the Pomimo a little stubborn when it comes to training. You will need plenty of positive reinforcement tools, such as treats.

Getting Out and About with Your Little Pomimo

Exercise is critical with these little furry friends. They can be bundles of energy and may need a way to release it. You can find that without planned activity with a human friend, they will look for other ways to play like chewing and digging.

They typically love walks around the neighborhood and may prefer a fenced in yard that allows them to run, or regular trips to the local dog park. Start socializing with other dogs early and give your Pomimo a few minutes to acclimate before letting it off the leash when at the park.

Take care with the small Pomimo when around bigger dogs at home or when making buddies at the park. Although most are friendly, the small size can put them at risk for injury.

Keep the thickness of their coats in mind when you do take them outside. They won’t do well in hot weather. Offer your dog lots of water and take short breaks in cool areas.

Pomimos tend to be pretty healthy, although there is no guarantee. They can inherit medical problems associated with their purebred parents.

Inherited diseases are a concern, especially with Pomeranians. An analysis of this breed shows a lack of genetic diversity because there is such a small population size.

The most common problem that a Pomeranian parent might pass on to a puppy is a joint condition called luxating patellas. Put simply, the kneecap can slip out of place making it difficult for the dog to walk. It’s a condition that can be crippling.

The Pomimo can also develop entropion, an eye problem characterized by the lower lids folding inward.

Other medical problems associated with the Pomimo include:

These dogs may also experience the occasional allergy.

Both American Eskimos and Pomeranians are known for their dental problems. Their mouths are sometimes too small for their teeth, leading to dental decay and gum disease.

Pomimo Health and That Thick Fur

The thick coat of the Pomimo is another potential problem area. The overgrowth around the ears, for instance, can lead to chronic ear infections. If you see your dog scratching or batting at the ears, an infection might be to blame.

The vet may advise a regular cleaning schedule for the ears and possibly suggest trimming the hair around them for better hygiene.

Pomimos can inherit a common Pomeranian skin condition that is a mix of alopecia, the loss of hair, and excess pigmentation. It is sometimes referred to as black skin disease.

Thick fur may lead to other skin irritations, too. Ask the vet or breeder what types of shampoo is best for your Pomimo to avoid rashes and inflammation.

Pomimo Health and That Tiny Size

Toy dogs are at risk for certain health problems related directly to their size. As a Pomimo dog gets older, the chance of tracheal collapse increases, for example. A honking sound is a warning sign of a collapsing trachea.

Their tiny stature also puts them in jeopardy for falls and other forms of accidents. Help them navigate stairs and keep them from crawling into small spaces.

How to Find Pomimo Puppies

The most logical and safest place to look for Pomimo puppies is with a reputable breeder. Before agreeing to take a puppy, ensure that the proper health screening is completed.

When considering getting a Pomimo puppy, it is critical that you consider the health of both parents. The parents should be checked for diseases associated with their breed before they mate. Pomeranians can have congenital neurological problems that can lead to anything from blindness to seizures to behavioral problems.

Take the time to ask plenty of questions when shopping breeders and do your research before choosing one. A good breeder will be happy to provide you with any information you need to make an informed decision before buying an American Eskimo Pomeranian puppy.