You are here: Home / Breeds / Is a French Bulldog English Bulldog Mix the Right Pet for You? 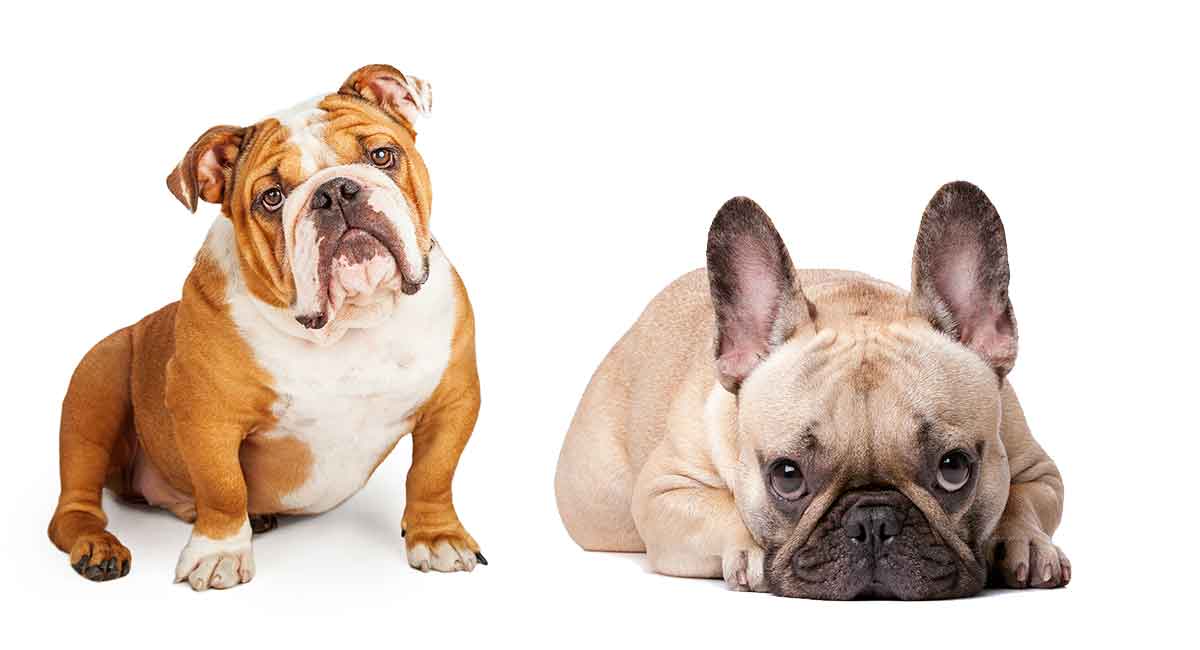 The French Bulldog English Bulldog Mix is also known as the Free-lance Bulldog.

For fans of all types of Bulldogs, crossing a French Bulldog with an English Bulldog might seem like a good way to get the best of both breeds.

Unfortunately, as desirable as these dogs are, they are both rife with serious heath issues.

Many of these problems are the result of their signature flat faces – indicative of being brachycephalic.

We’ll take a look at what this means for the French Bulldog English Bulldog mix, but first we’ll learn a little more about each of the parent breeds.

Where Does the French Bulldog English Bulldog Mix Come From?

When you cross two different dog breeds like the French Bulldog English Bulldog mix, the result is called a hybrid.

The practice of mixed breeding comes with plenty of controversy.

There are those who believe the benefits of hybrid vigor outweigh any disadvantages.

Hybrid vigor means the improvements in form and reduction in inherited disease associated with crossbreeding.

Introducing the blue French Bulldog. We explore the pros and cons of this unusual color

However, many other people believe that controlled breeding and genetic testing are the best way to reduce the risk of genetic defects.

You can read more about both sides of the debate here, and reach your own conclusions.

Although there’s no documented history of when the French Bulldog English Bulldog mix came on the scene, like many hybrid breeds, they likely first appeared in the early 1990s.

To get an idea of their history, we’ll look at the French and English Bulldogs individually.

Origins of the English Bulldog

In 13th Century England, bullbaiting was a popular sport.

This is where the English Bulldog’s ancestor was developed.

In order to fight staked bulls, these dogs were ferocious with huge jaws.

When bullbaiting was outlawed in 1835, the Bulldog faced extinction.

Fans of the breed began the long process of transforming the vicious bruiser into a companion dog with a sweet, mellow disposition.

In 1886, the breed was recognized by the American Kennel Club.

Origins of the French Bulldog

In the mid-1800s, a toy Bulldog that weighed about 12 to 25 pounds became popular, particularly with lacemaking artisans around Nottingham.

When the industry relocated to northern France, toy Bulldogs made the journey as well.

Over decades, French breeders crossed them with Terriers and Pugs to create a dog without the Bulldog’s extreme underjaw.

From his sourpuss expression and flat face to the undershot jaw and pronounced jowls, the English Bulldog is one of the world’s most recognizable breeds.

Their thick-set, well-muscled physique with wide shoulders and sturdy limbs are equally unmistakable.

Even their characteristic rolling gait is distinctive.

Their short smooth coat is glossy, and comes in a variety of colors and patterns.

The French Bulldog resembles a scaled-down version of the English, but with large, erect “bat ears”—a feature that is distinctly their own.

They are considerably smaller than the English Bulldog, standing 11 to 13 inches and weighing under 28 pounds.

Whenever two different breeds are combined, it’s impossible to know exactly what the offspring will look like.

However, since these two dogs are quite similar and have a shared history, the appearance will be a little more predictable.

You can expect a medium-sized dog with an athletic build and short fur.

Their heads will be square and oversized, the muzzle short, and ears can be erect or floppy.

Since both parents are friendly, loyal and loving, the French Bulldog English Bulldog mix will probably be sweet-natured.

Despite their violent history and surly appearance, the English Bulldog is not prone to aggression.

On the contrary, they’re known for having a calm, dignified demeanor.

These breeds do have some differences.

The English Bulldog has kept his propensity for courageousness, which makes for a good watchdog.

The Frenchie was bred to be a lapdog, opting to play and be pampered.

Both breeds, however, can have a stubborn streak.

Puppies are likely to want to urinate at certain times of the day, so following a potty training schedule is a good way to reduce the number of accidents.

Crate training will also help with bladder and bowel control.

Despite being stubborn, the French Bulldog English Bulldog mix is also a people-pleaser, which can help with training.

As with all breeds, early socialization and positive reinforcement training techniques from a young age is the best way to ensure your puppy develops into a well-adjusted adult.

Our training pages have lots of tips and troubleshooting idea for every step of your journey.

Due to being brachycephalic, exercising your French Bulldog English Bulldog Mix will require monitoring.

Moderate exercise consisting of 30-minute daily walks will suffice for this breed.

Extreme weather has a big impact on their health.

Brachycephalic breeds have a tendency to overheat.

They should never exert themselves in hot or humid weather because their short muzzle can make breathing very difficult.

They should never be left in the sun without access to shade and water.

Pools are hazards for this breed.

Even when they’re in shallow water, they should be closely watched because they cannot swim.

Their short legs and stocky bodies mean stairs should also be avoided to reduce the risk of back problems.

Often mixing two different breeds is a way to reduce the chance of inherited health problems.

In the case of the French Bulldog English Bulldog Mix, both parent breeds share some serious health and conformation problems that need to be honestly considered.

The life span of the French Bulldog is 10 to 12 years. The English Bulldog’s is from eight to 10 years.

Unfortunately for these breeds, the very attributes that make them so distinctive and desirable cause them considerable health problems.

Brachycephalic obstructive airway syndrome refers to the effects that a flat muzzle has on the respiratory system.

Signs of this condition include snoring, panting, overheating, exercise intolerance and gastrointestinal problems.

Over time, these symptoms can worsen and cause permanent damage.

You must be diligent in monitoring your French Bulldog English Bulldog mix because surgery is often required to allow normal respiration.

Their wide-set protruding eyes are prone to eye disorders such as corneal ulcers, which can potentially cause blindness.

Dental problems are also a result of their conformation.

Because they have the same amount of teeth as any dog—with less space to fit them—tooth decay is also quite common.

Unfortunately for the French Bulldog, his structural problems are not confined to his face.

They’ve also been bred to have chondrodystrophy, which is a form of dwarfism defined by shortened legs.

It causes intervertebral disc disease (IVDD) and other spinal malformations.

Both the French and English Bulldogs are predisposed to screw tail.

You will need to check the tail area every time your puppy poops to keep him clean and avoid infection.

Other Health Problems for the French Bulldog English Bulldog Mix

Structural defects, such as extremely narrow hips, can make it difficult for both the French and English Bulldogs to give birth.

Hip and elbow dysplasia, an abnormal formation of the hip socket that can cause lameness and arthritis of the joints, is also found in both parent breeds.

The short, smooth coat of the French Bulldog English Bulldog mix is fairly low maintenance, requiring an all-over brushing once or twice a week.

Their facial folds need to be kept clean and dry to avoid skin irritation and infection.

They will do best with a high-quality, age-appropriate dog food.

As both parents are prone to obesity, be mindful of calorie consumption.

Being overweight exasperates conformational issues such as joint and back problems.

Dogs who are brachycephalic face a lifetime of health concerns.

When two dogs who both have the same conformational problems are bred together, it potentially increases health risks that can diminish their quality of life.

Although both the French and English Bulldogs have wonderful characteristics that would make them loving family pets, it’s impossible to recommend a breed with so many serious health problems.

Instead of getting a French Bulldog English Bulldog mix puppy, consider rescuing an older dog.

There are numerous reasons to rescue a dog.

They are less expensive and may even be house-trained.

You’re helping to stop the cycle of mass breeding and pet overpopulation.

In the case of the French Bulldog English Bulldog mix, you’re reducing the demand for a breed whose conformation has not evolved naturally; it’s been purposely altered to have severe deformities.

If you cannot be dissuaded from getting a French Bulldog English Bulldog mix puppy, make sure to seek out a reputable breeder who has tested the health of his stock.

Avoid pet stores and puppy mills at all costs.

Puppies located in either of the two have an even higher probability of health problems.

Those dogs are often neglected, and receive little to no exercise, affection or veterinary care.

For more information, check out this guide to help you find a puppy.

Choosing products designed for French and English Bulldogs will be suitable for the Free-lance Bulldog as well.

A French Bulldog harness allows you to teach him to walk obediently without hurting him.

The best toys for English Bulldogs are chew toys that are easy for them to pick up.

This article will give you some tips on the best food choices for an English Bulldog puppy.

Pros and Cons of Getting a French Bulldog English Bulldog Mix

Cons: Both parents are brachycephalic breeds, with serious conformational issues and health problems.

Instead of a Free-lance Bulldog puppy, consider some of these breeds with a healthier conformation.

Is a French Bulldog English Bulldog Mix Right For Me?

It’s impossible to recommend a breed like the French Bulldog English Bulldog mix in good conscience.

These dogs are simply at risk for too many problems due to their extensive structural defects.

If you really want a Bulldog, please consider getting an older dog from a shelter.

Brown, E.A., et al., 2017, “FGF4 Retrogene on cfa12 Is Responsible for Chondrodystrophy and Intervertebral Disc Disease in Dogs,” Proceedings of the National Academy of Sciences of the United States of America.