You are here: Home / Breeds / Mix / Cocker Spaniel Dachshund Mix – What Can You Expect? 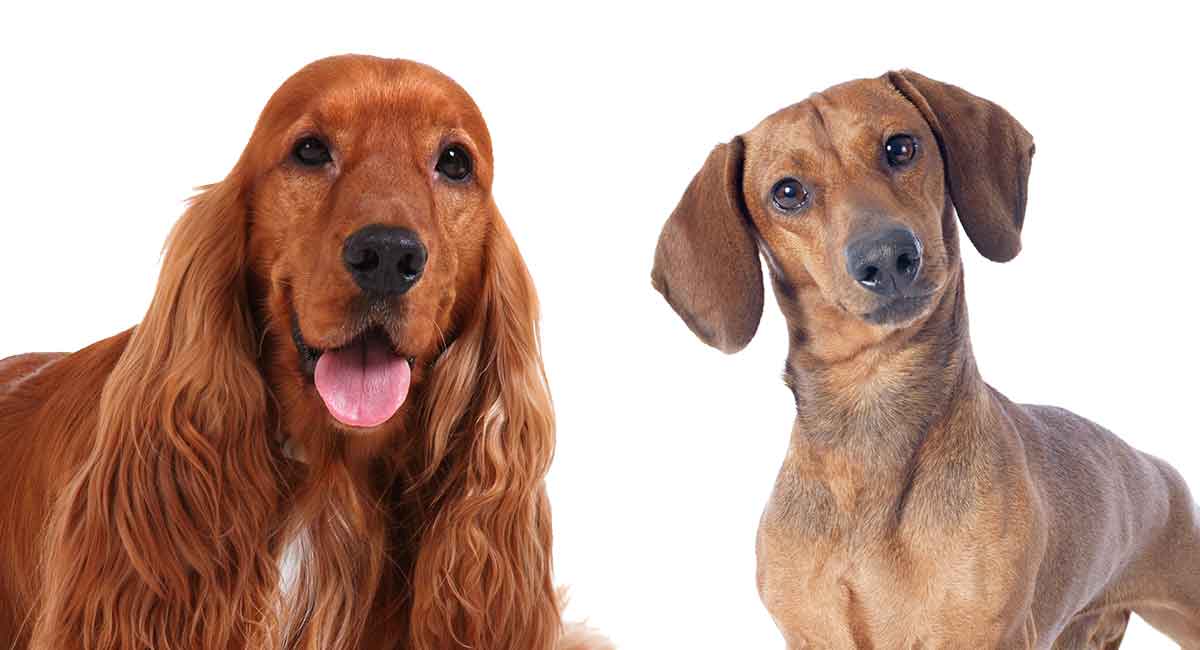 What do a Docker and a Spaniel Doxie have in common?

They are both names for the beautiful Cocker Spaniel Dachshund mix.

This mix can be mildly affectionate, fiercely loving, or a tiny terror, as all small dogs can be.

Let’s take a look at what sets a Cocker Spaniel Dachshund mix apart from the crowd.

Where Does the Cocker Spaniel Dachshund Mix Come From?

Cocker Spaniels have been around since the 1800s, with the split between English and American breeds made official in 1945.

This parent breed is known for being a working dog that was originally used in hunting woodcocks, a type of game bird.

On the other side of the family tree, Dachshunds hail from the 1500s in Germany.

The first Docker was born in the United States in 1999.

The looks and temperament of Cocker Spaniel Dachshund mix dogs are far less predictable than the individual parent breeds.

On the other hand, crossbreeding to make hybrids like the Docker can have a positive effect on their health.

To find out more about debate surrounding mixed breed dogs, visit us here.

The important thing to remember is that either option will bring its own challenges and benefits to you and your new pup’s life.

A little dog, the Cocker Spaniel Dachshund mix generally ranges from about nine to 13 inches in height.

They weigh on average around 25 pounds.

Anecdotally, the general shape of these dogs typically skews toward the Dachshund side of the family.

They are commonly long-bodied, deep-chested, and short-legged.

Apart from such general trends, almost all other physical details are up to chance.

Since Dockers can inherit physical attributes of either parent, it is possible for them to look very much like a Cocker Spaniel, or not at all.

Eyes and noses are a little more predictable. Noses are black and eyes are either brown or hazel.

Their coats are usually medium length and thick.

Black, brown, white, cream and variations of these colors are all possible.

The temperament of the Cocker Spaniel Dachshund mix depends on multiple factors.

As with any dog, quality training and attention from a loving owner can make the difference between a well-adjusted dog or a problem pet.

Regardless of which parent this mix takes after, the dog will be a hunter with a strong work ethic and prey drive.

They will need lots of exercise and play to burn off energy, and training to learn acceptable behavior.

Both Cocker Spaniels and Dachshunds crop up regularly in canine aggression studies, but the findings are far from conclusive.

This 2008 study at the University of Pennsylvania found that Dachshunds (alongside Chihuahuas) were the breed of dog most likely to behave aggressively towards humans and other dogs.

That study contradicts this 1996 Danish study, which found that Dachshunds were among the breeds least likely to show aggression.

The same Danish study, and this earlier Anglo-American study, found that Cocker Spaniels are prone to aggression towards familiar and unfamiliar humans.

But a UK study in 2014 found that the gun dog group (which includes Cocker Spaniels) is the least aggressive towards strangers.

So the answer for Dockers is far from clear cut.

But we do also know from the latter study that attending puppy classes significantly reduces the risk of puppies growing up into aggressive dogs.

The Importance of Socialization for Cocker Spaniel Dachshund Mix Dogs

To raise a confident, well-mannered Docker, socialization is more important for this extroverted breed.

Introduce your Cocker Spaniel Dachshund Mix puppy to a wide variety of people and places while they’re young.

This reduces the risk of them reacting fearfully and aggressively to new situations when they grow up.

With care and attention, this mix can be one of the most loving and devoted mixes around.

In general, this mix is eager to please and readily trainable.

However, this can vary dramatically even within the same litter of pups.

The training and exercising of any breed or mix is a complicated subject.

Basic guidelines remain the same for all, but you wouldn’t train a Husky in the same way as, say, a Pomeranian!

Choosing the Right Training Technique for Your Docker

These dogs want to please and obey you.

They just have to be shown how to channel their natural energy in a positive way.

Harsh training and overt disapproval can easily set back these intelligent pups.

“Solving” issues in these ways may only be creating problems down the road.

Our guide to the best training methods will help you start off on the right foot.

Both parents of this mix are very active dogs and their offspring will be the same way.

A hour of activity a day is recommended by most experienced owners.

Training, socialization, and exercise can be easily combined in day-to-day life.

With plenty of love and attention, these tasks can turn into great bonding time with the newest member of your family.

How about the overall health and care of the Cocker Spaniel Dachshund mix?

Because this is a fairly new crossbreed, the best way to learn about its health is to look at the parents, and how their genetics will impact their offspring.

Dachshunds are prone to:

Intervertebral disc disease and other disorders of the spine are particularly significant problems for Dachshunds.

These painful conditions are the result of their exaggerated shape, something we as humans have deliberately pursued at their expense.

To spare Docker puppies the same fate, responsible breeders only breed from Dachshunds with a healthy length spine.

Regular veterinary visits will ensure that you stay on top of your pet’s health.

Hip dysplasia and PRA are common to both parent breeds, but there are screening tests for both conditions.

Insist on buying a puppy from a breeder who screens their parent dogs for these conditions, and who can demonstrate that their Dachshund parent is free of intervertebral disc disease.

Moving on to more general health information, what should you know in everyday life about this mix?

They tend to live about 11-14 years and may have allergies.

Grooming is fairly low-maintenance; they require brushing about three times a week, depending on their coats.

As with all dogs, quality food is a must.

Feed as your vet recommends, and you are good to go!

These dogs are small and have moderate energy.

They are also fairly easy to train and learn quickly.

They are likely to fit in well with active adult households.

A happy Docker needs lots of socializing, exercise, and opportunities to “work” via games or classes.

Since Cocker Spaniels and Dachshunds have mixed reputations for aggression, this might not be a suitable hybrid for households with young children or other dogs.

Likewise, the high prey drive of both parents means their crossbreed offspring might not be safe around smaller pets like cats and rabbits.

It will depend both on your family and your potential puppy or rescue dog.

Rescuing the newest member of your family brings many benefits.

You give an animal a new start on life and bring home an exciting new member that is ready-made.

Depending on the dog in question, he may not need as much initial training or similar training as you may have given other dogs.

Though it comes with many challenges, please consider rescuing a Cocker Spaniel Dachshund mix if you are interested in one and can find one!

How do you go about finding a puppy, particularly if you are looking for a specific mix?

Even with the rise of “designer dogs,” i.e. very tailored mixes, it can be difficult to find what you want.

First of all, it is very important to avoid puppy mills and pet stores.

These places are only out to make a profit.

The best place to start is with a reputable breeder who obviously takes care of his or her dogs and cares about where the puppies are going.

Beyond that, it really depends on where you live and what options are available in that area.

A great place to start is on our own puppy search page!

How do you raise and train your Cocker Spaniel Dachshund mix to the best potential for both of you?

It all starts with training and practice.

This is a large topic, but you can start easily at our dog training pages today!

We also have resources to help you understand your dog or pup better.

Pros and Cons of Getting A Cocker Spaniel Dachshund Mix

There’s a lot of information in this article.

Here’s a quick sum up of what has been covered so far.

If you love the idea of a Cocker Spaniel Dachshund mix but would like to keep your options open, consider these alternatives!

Are you open to a rescue Cocker Spaniel Dachshund?

One of these dogs could be just waiting for a forever home with you.

Regardless of your location and resources, your best bet is asking specific groups for Cocker Spaniels and Dachshunds.

Tell them your story, and see where it goes!

You can also target adoption centers and other rescue organizations.

Always remember that rescue dogs are rescue dogs for a reason, but this reason isn’t necessarily a reflection of the dog’s temperament.

Open up a dialogue with the shelter and learn as much as you can about your potential options.

If there’s a rescue shelter near you which specializes in Cocker Spaniels or Dachshunds, please tell us about them in the comments!

Is A Cocker Spaniel Dachshund Mix Right For You?

If you are looking for a striking smaller dog to love, train, and enjoy life with, a Cocker Spaniel Dachshund may be just right for you!

If you’ve already taken the plunge with a Docker puppy, please tell us all about them and how you’re getting along in the comments!

Rosenblatta, A., et al, Precision of spinal radiographs as a screening test for intervertebral disc calcification in Dachshunds, 2015.