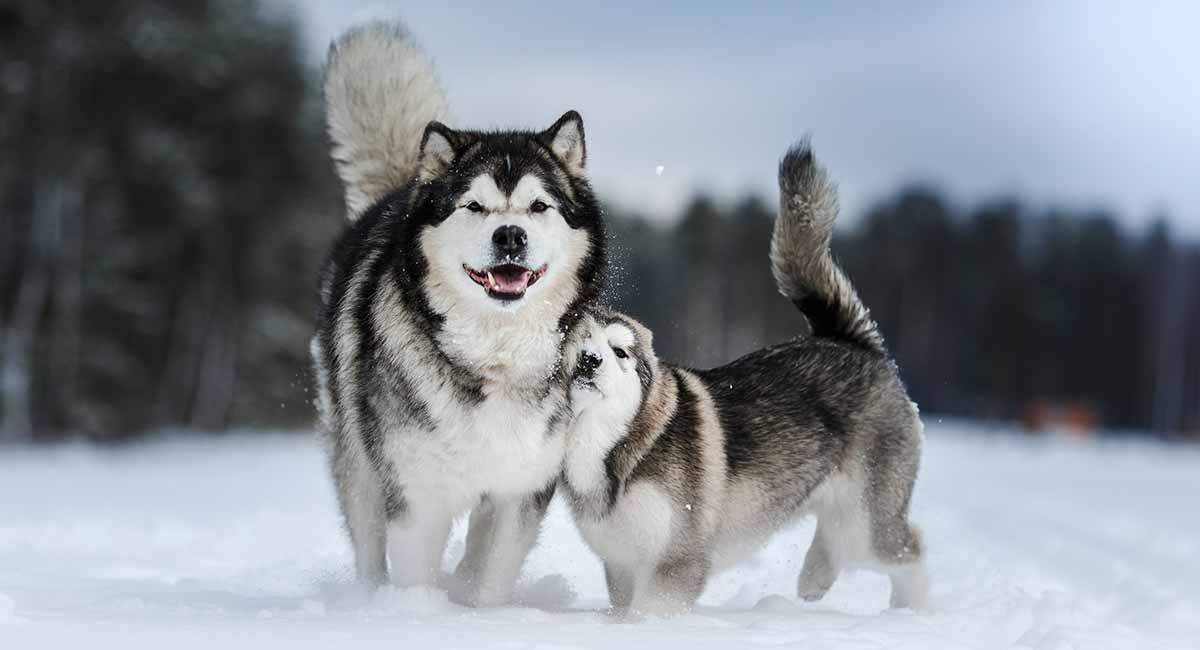 Many people, myself included, take naming their new dog just as seriously as naming a newborn baby.

However, picking the right name can be difficult, especially if you’re not the only one with a say in the matter.

With that in mind, we’ve compiled a list of potential names for your Alaskan dog.

From simple male and female names to cute names to unique names, we’re sure you’ll find something you like.

And if not, we’ve also included links to some of our other lists of dog names for even more options.

When you’re looking for dog name ideas and tips, you’ll probably come across a lot of suggestions.

However, we haven’t been able to find any scientific evidence support or oppose this advice.

Even so, we do agree that using a long, multisyllabic name would turn out to be a mouthful that most of us would shorten to a nickname anyway!

So, if science doesn’t have much to say about the art of naming, exactly how should you go about it?

There are no rules. The most important thing is to pick a name you love and one you won’t get tired of or regret later.

Envision yourself interacting with your dog in the future and using whatever name you’re considering.

You can also ask others for their opinion (sometimes we all need to be brought back to earth). Just remember, at the end of the day, the choice is yours.

The most popular Alaskan dog names describe some characteristic about the dog. Perhaps their eyes, coat, or demeanor.

Below are some names particularly suited to Alaskan dogs.

This list includes some of our favorite female dog names. Of course, you can totally use them for male dogs too!

Here are some great name options for your male dog.

Though we’ve listed these as masculine, feel free to use them for female pups as well! You can name your dog whatever you want regardless of their sex.

Or you can find 200 more male dog names here.

Alaskan dogs look pretty cool, so why not give them a cool name to match? Below are some of the coolest dog names out there.

Big or small, dogs are adorable. Some pet owners prefer to celebrate that by choosing a cute name for their dog.

We hope this list can help you find the perfect cute dog name.

Whether you’re notorious for cracking Dad jokes or never seem to run out of puns, here are some goofy dog names for the comedians of the world.

Not into common names like Charlie, Bailey, or Max? We’ve got you covered with this list of unique names.

Not connvinced? Check out our article with 300 more unique name ideas

Names Inspired by the Inuit Language

We’ve learned that “Eskimo” is considered offensive by some natives, so we will not be using the term. Instead, we will refer to the indigenous peoples of the far north as Inuit.
Although not all of them are technically Inuit, we don’t have a better way to describe them collectively at this time.

It is relatively popular to name an Alaskan dog using one of the native languages of the north, which include Inuit, Aleut, and Yu’pik.

However, among each language, there are a plethora of dialects.

This means the name you choose may be pronounced differently depending on the dialect, or may not even exist in some dialects.

Furthermore, it has been reported that Inuit peoples have dozens of ways to describe certain things.

For instance, in the Inuit dialect of Canada’s Nunavik region, there are 53 ways to describe snow! Similarly, Inuits also have many different words to describe ice.

Be careful when choosing an Inuit word for your dog’s name, as it might mean something slightly different than what you think it does!

We suggest you research the pronunciation of names you’re interested in.

However, if you want to change the pronunciation to something you prefer, that works too. Most of us don’t speak Inuit languages, so no one will be the wiser!

Some names just sound tough, whereas others seem tough because they are associated with something tough.

We won’t lie, a handful of these names were inspired by past and present pro wrestlers.

While some Alaskan dog names are reminiscent of their coat or often striking eyes, other names may have a history to them. Here are some interesting facts about Alaskan dogs.

Fun facts aside, congratulations on your new best friend!

We hope our article was able to help you find the perfect name, and we’d love to hear your favorite names in the comments.