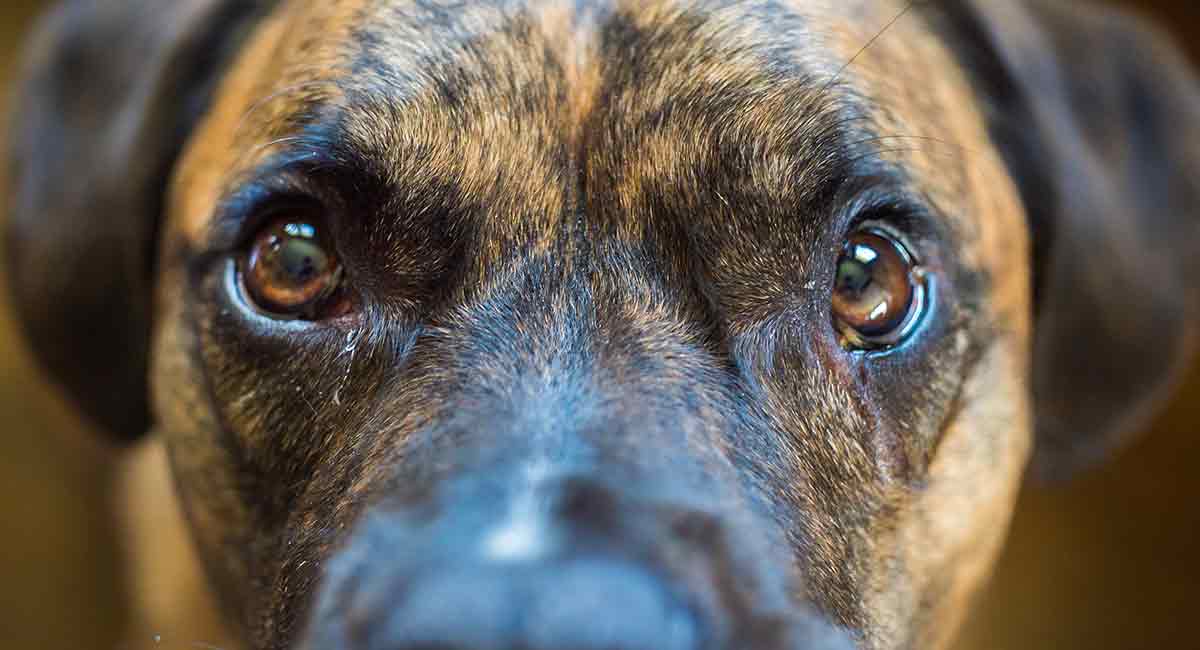 Brindle dog breeds have brown fur with dark flecks. This pattern is caused by the interaction of the Agouti gene with various other genes.

Some dog breeds that can have brindle coats include Mastiffs, Dachshunds, and Bull Terriers.

Does the brindle color affect temperament or health?

And how does the brindle color happen?

Read on to learn everything you need to know about brindle dog breeds.

What Is a Brindle Dog Coat?

The brindle is a coat pattern, sometimes called “tiger striping”. It appears as irregular stripes or spots on a base color of the dog.

Generally, the base color is not much lighter than the stripes. So, it can be a subtle but interesting pattern.

For example, brown stripes could appear on a lighter brown coat.

Some dogs are so-called light brindle in color—mostly red with darker stripes. Whereas others are heavy brindle—at a quick glance, the dog appears black or dark brown.

You may also the term reverse brindle. This is the same as black brindle.

What is a Reverse Brindle Coat?

The terms reverse brindle and black brindle are used to describe a brindle dog coat with a high concentration of darker stripes causing the brindle to look reversed.

With reverse brindle dogs, light stripes appear to sit on a dark background.

In some dog breeds, the brindle pattern is encouraged in purebred show dogs. In others, brindle coloration is less desirable.

Brindle patterning can also appear on different animals, such as horses, cats, rodents, and even lizards.

This doesn’t mean those animals they have similar genetics, however. They are just visually similar.

Genetics of the Brindle Coat

Dog coat color is based on a number of different genes that control two pigments: pheomelanin (red-yellow) and eumelanin (black-brown).

Dog coat color genes don’t just switch specific colors or patterns on and off individually. They also switch other pattern and color genes on and off too! So to be brindle requires a brindle gene, and a specific type of Agouti gene.

Even with this combination present, the brindle will be switched off if another gene known as ‘dominant black’ is present!

The Agouti gene is one of the most important genes involved in coloration. It switches on and off the red and black pigments in dogs. A particular combination of Agouti genes can even give rise to tricolor dogs.

And different Agouti combinations determine how the brindle shows up in dogs.

Genes can act differently in different dog breeds. That’s why most boxers are brindled in some way or another.

There is still a lot of research to do. We don’t yet know how to genetically test for the brindle coloring.

And it’s still unclear what controls the various aspects of brindle, such as stripe width.

We do know some things, though. Researchers have determined which gene determines color intensity.

Moreover, all brindle dogs can still have white markings on their coat. Sometimes called a trindle or tricolored coats.

To make matters even more complicated, not all dogs can have a striped brindle coat. And not brindle patterns appear in the same way in different dog breeds.

Brindle coloring itself is not an issue in terms of your dog’s health.

But, it can be mixed with other color coat genes that do lead to health problems.

For example, the merle gene is known to cause ear and eye problems in dogs.

This is quite a subtle effect but has health implications for any dog breed with the merle and brindle genes.

Therefore, it’s wise to pay attention to any genetic health issues brindle breeds might be susceptible to.

Let’s take a closer look at some of the more popular large breeds with beautiful, brindle coats!

This handsome, big-boned dog is the largest of Japan’s native breeds. It comes in many colors, including brindle.

Boxers actually come in just one main coat color, fawn, that comes in various shades. But they can be brindle with a fawn color base. 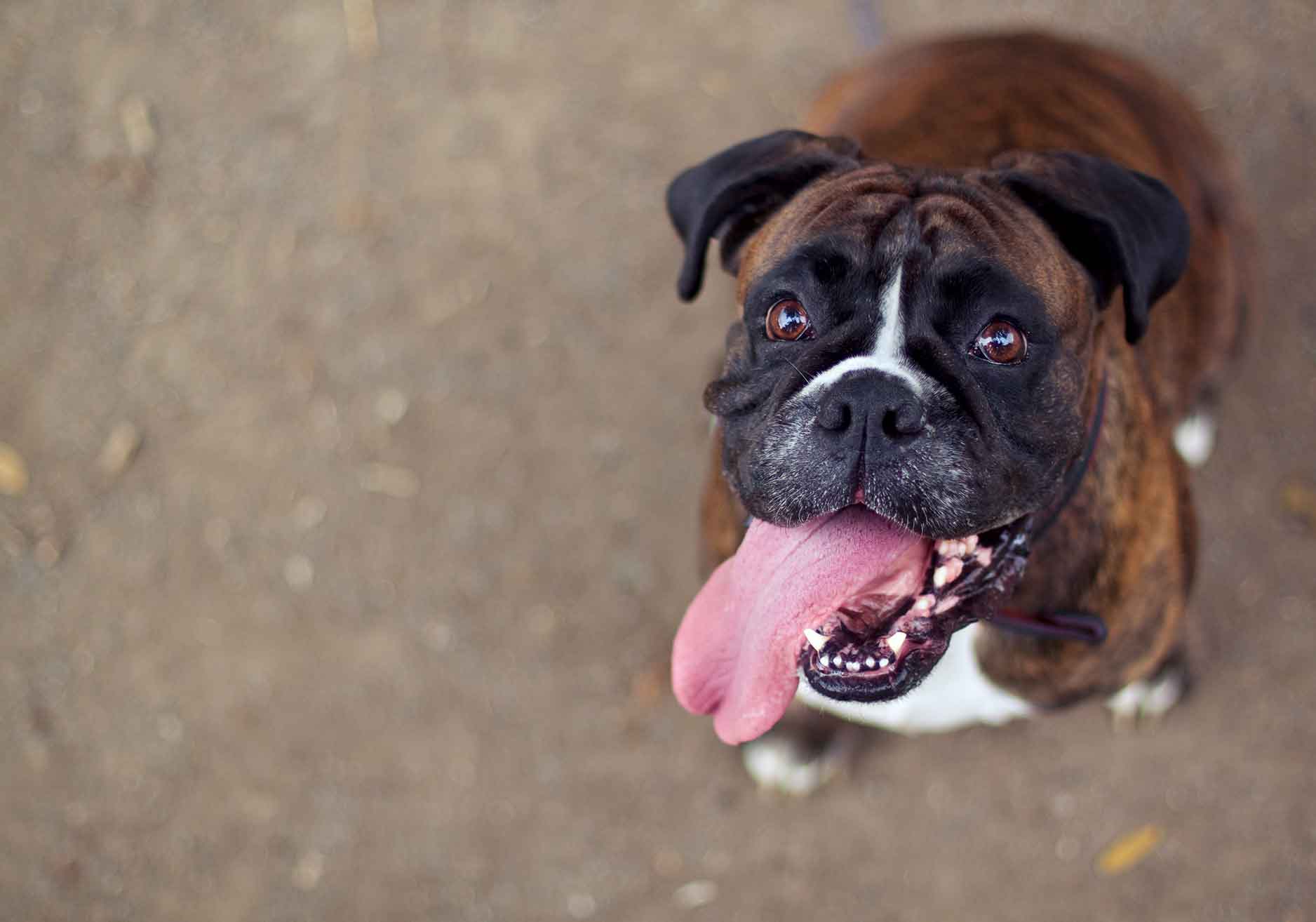 The brindle pattern is extremely common on boxers.

In fact, dark-colored Boxers most likely have dark—even black—stripes on a fawn coat. Reverse brindle makes them look black.

The main coat colors of the Mastiff are fawn, apricot, and brindle. 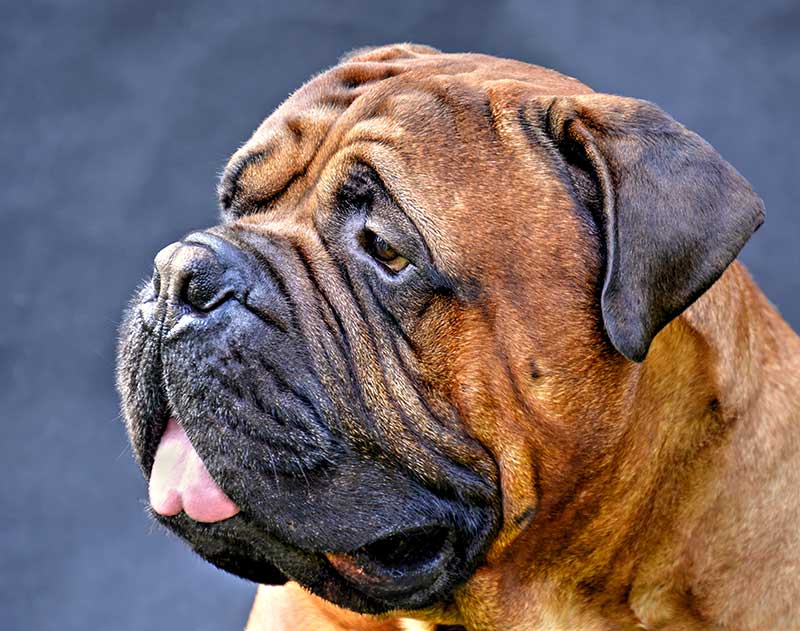 Brindling on the Mastiff usually consists of a fawn or apricot color in the background and dark stripes on top.

The muzzle, ears, and nose of the Mastiff are typically dark, as well.

Brindle is acceptable in Great Danes. 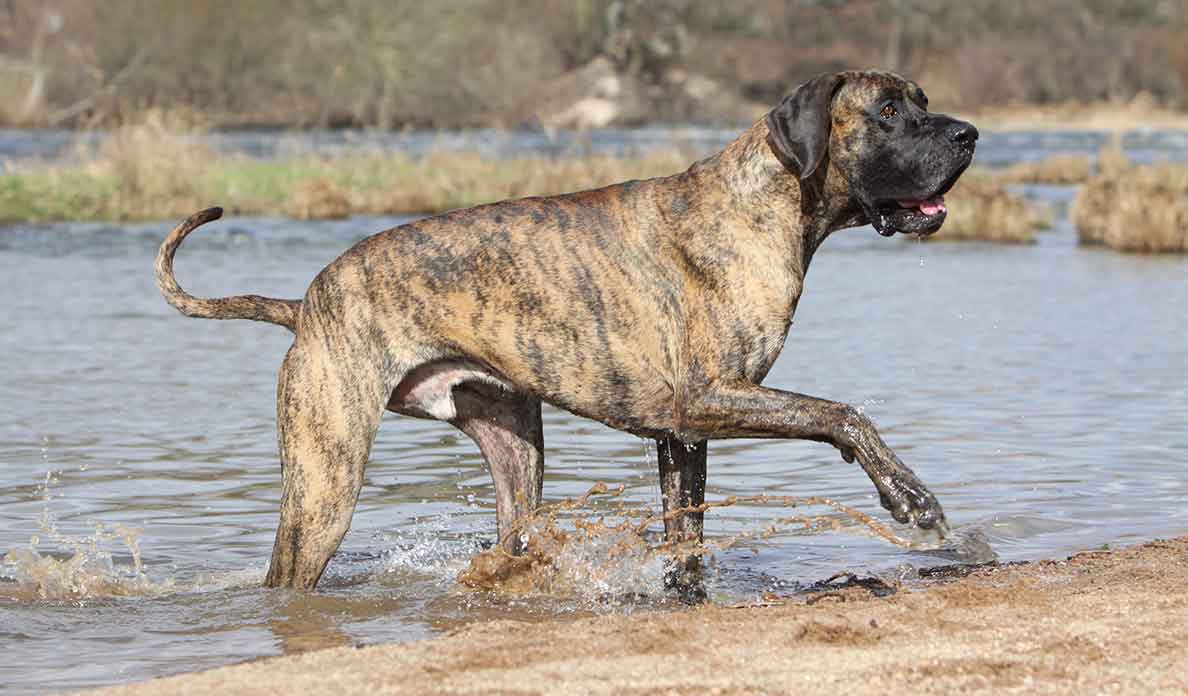 The American Kennel Club (AKC) breed standard says that the base color for this breed should always be yellow gold with black cross stripes, in a chevron pattern.

In Great Danes, an intense base color and distinct, even brindle pattern is preferred. Variances like too little or too much brindle, large white areas, and “dirty” brindles are considered faults.

The AKC breed standard for the Cardigan Welsh Corgi lists all shades of red, sable, and brindle as allowable.

They can also have brindle points. In Corgis, there is no color preference for purebreds and all listed colors and shades are desirable. 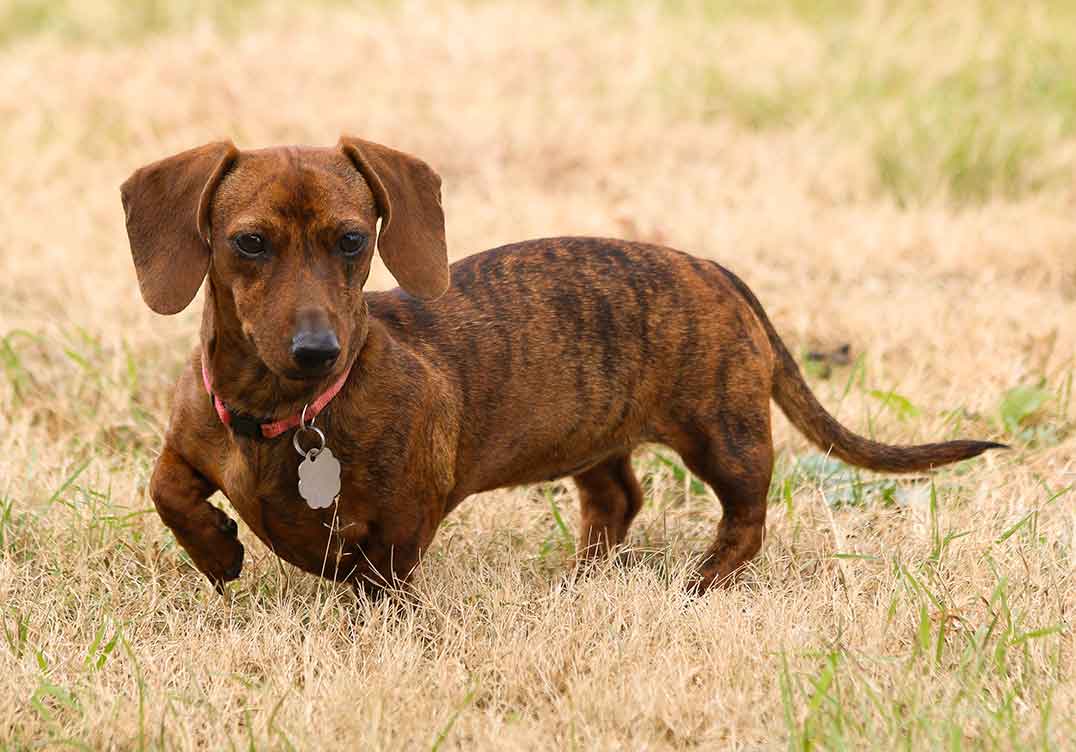 Brindle is considered a standard pattern in smooth dachshunds.

Chihuahuas come in a wide variety of colors and patterns!

While brindle is not a particularly common coloration for this breed, brindle Chihuahuas do exist.

Brindle is a common pattern on the small but heavy-looking Bulldogs. 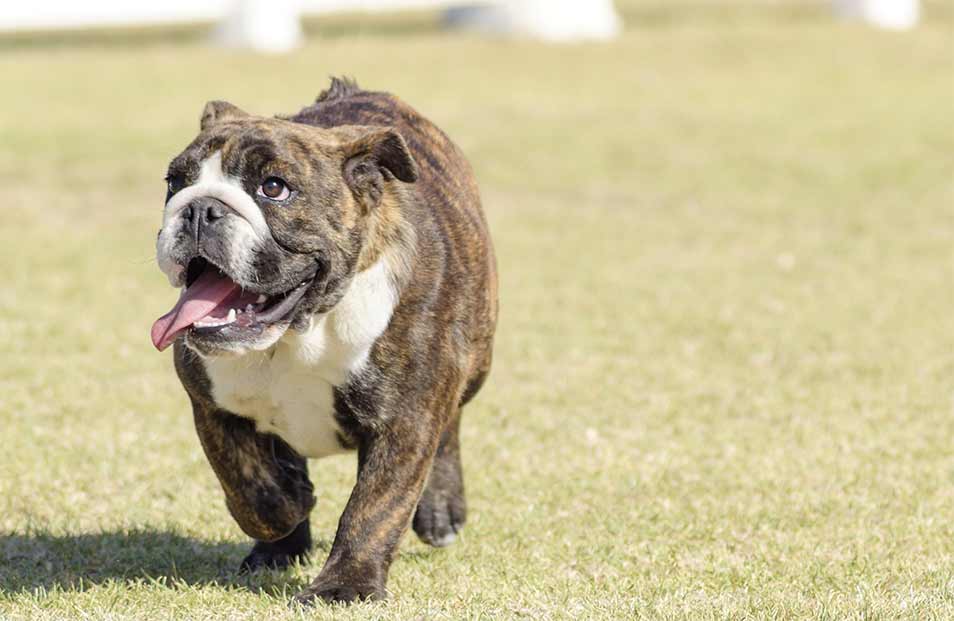 Often you’ll see fawn or red as a base color. Red brindle is often considered desirable in this breed.

Some terrier breeds can show the brindle gene, too. These include the following.

The American Staffordshire Terrier can come in many different colors, including solid, parti, and patched colors.

They should not be more than 80 percent white, according to the AKC standard.

According to the AKC, brindle is actually a preferred color for colored Bull terriers.

One of the cutest things about the Boston Terrier is their so-called tuxedo—a colored area accompanied by a white area.

This tuxedo jacket can come in seal or black brindle. It’s clearly visible on the colored area of a Boston Terrier’s fur.

There are some great hound breeds that show brindle!

These lanky dogs come in many different colors, including several shades of brindle. 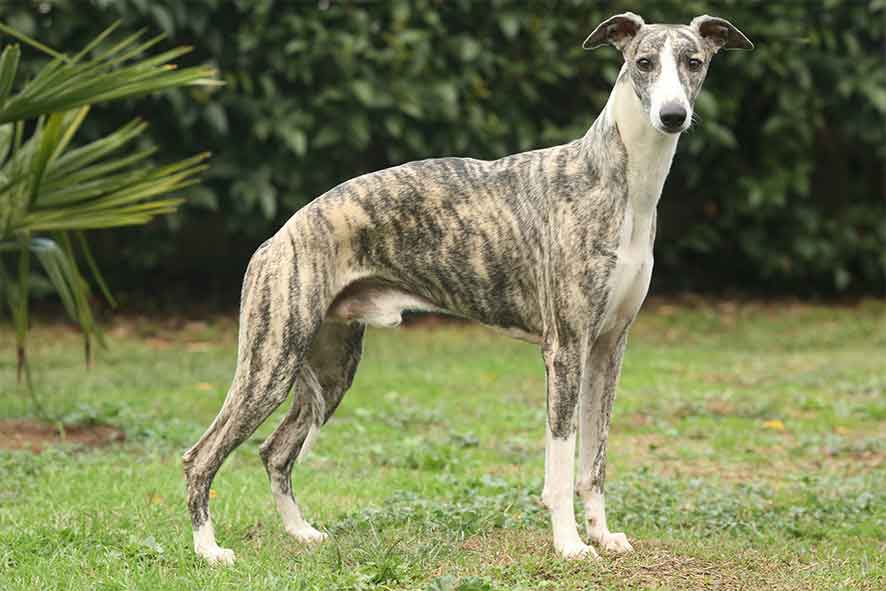 These include black brindle, blue brindle, and red brindle. Any of these brindle patterns can be combined with white areas in different combinations.

The red brindle pattern is preferred. Especially if the colors are fine and evenly distributed.

These lightning-fast sprinters are available in blue brindle, fawn brindle, and red brindle. These combinations can come with white markings as well. 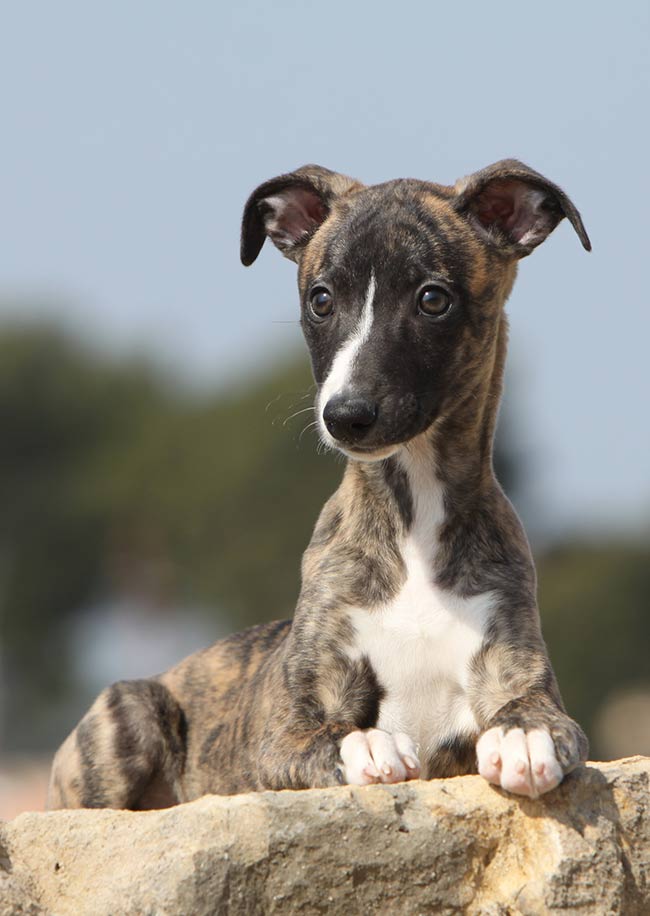 You can even get buckskin, tan, malt, and dilute black factors in Plott brindle colors.

In these dogs, the AKC breed standard says that any shade of brindle is preferred over solid.

Yes, this dog breed has Brindle in the name!

Standard colors for the Treeing Tennessee Brindle are black and brindle. They can also have a brindle trim as a marking.

This coonhound breed is in the AKC Foundation Stock Service. So it’s not yet a full registered member but under development.

The United Kennel Club does recognize it, though, and says that any color other than brindle or black with brindle is considered a serious fault.

What Dog Breeds Have Brindle Coats?

Which will you choose? Let us know in the comments!