You are here: Home / Breeds / Pure / Blue Weimaraner – Uncovering The Controversial World Of The Dark Weim 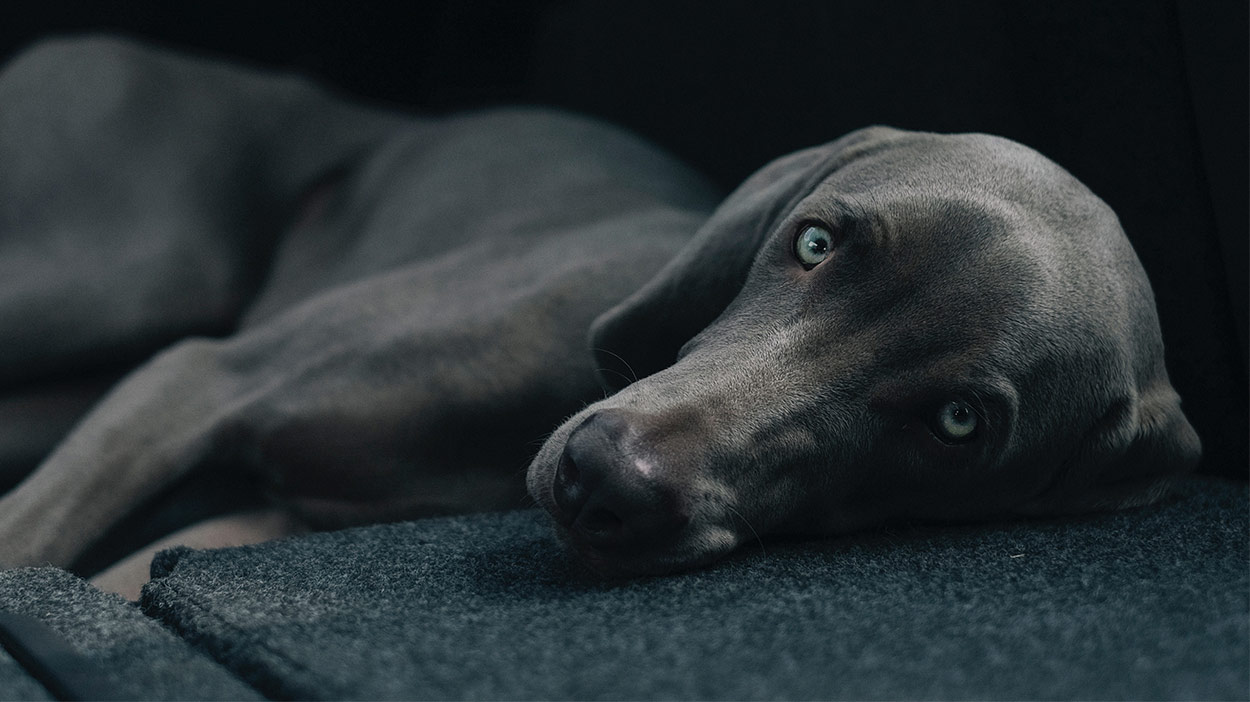 Welcome To Your Complete Guide To The Blue Weimaraner. A Gorgeous But Surprisingly Controversial Dog.

Among its admirers, the classically colored pedigree Weimaraner is affectionately known as the “Gray Ghost.”

This regal, intelligent, social breed hails from Germany and its one-of-a-kind silver and gray tinted coat is what led to the breed’s alliterative nickname.

But within the canine world, the Blue Weimaraner dog stands at the crux of an intriguing scandal. How did such an exquisitely shaded dog find itself the bone of contention?

From Silver To The Blue Weimaraner

We’ll introduce you to the little canine who kicked off this firestorm of controversy in just a moment, but first it’s appropriate to pay this noble breed its due respect.

Although there exists dissension among the ranks about Weimaraner shades, admirers of the breed will agree that whatever the coat color, the large, solidly built, Weimaraner is a beautiful, world-class canine.

It is the American Kennel Club’s 34th most popular breed, and while it is not as well-known as the beloved Labrador Retriever nor as instantly recognizable as the popular German Shepherd, the distinguished Weimaraner has a devoted and enthusiastic fan club.

And it’s within this fan base that passions have roiled the once placid Weimaraner world. Emotions run high among Weim lovers when the topic of the Blue Weimaraner arises. Just why is this?

We have to take a look at the classic and traditional Weimaraner color scheme to better understand why the blue color has given rise to a measure of angst in some quarters.

While the “trademark” gray is a lovely and distinct shade, it’s ironic that the breed best known as the Gray Ghost actually has several hues within its population.

Many would describe the traditional Weimaraner gray as being more of a dilute chocolate brown shade. Among this group some dogs are very dilute, almost a sandy beige in color, while others appear more brunette. Within the spectrum there are many variations, dilutions, and strengths, with most colors being acceptable.

The Blue Weimaraner is every bit as much a Weimaraner in temperament and behavior as are the Grays, but its coat appears as a diluted shade of black instead of a lightish brown.

The hue has been described as “charcoal gray” and ranges from a faded blue to a deeper, darker blue. Experts caution that the two colors are actually different color tones, and should not be thought of in terms of either the Blue or Gray being darker or lighter than the other one.

Introducing the blue French Bulldog. We explore the pros and cons of this unusual color

Thus a Gray dog can be darker than a Blue one even though most Grays are lighter. Genetically speaking, Blue is dominant to Gray, meaning at least one parent must be Blue in order to produce Blue puppies.

Now that we’ve got the color schematics sorted out, we still haven’t answered the question as to why the infamous Blues are looked upon by some in a less favorable light than the Grays.

All the furor can be traced back to one presumed pedigree pooch named Cäsar von Gaiberg, whose history-making life story is a riddle wrapped in an enigma wrapped in a mystery.

How much trouble could one innocent Blue Weim cause for the grand breed that originated in the 1800’s in Germany as a royal hunting dog? Plenty!

This now notorious canine, also known as “Tell,” was born of outstanding German bloodlines in 1947, according to records kept at the time. By all accounts Tell was a fine specimen of a dog, and produced several lauded offspring.

Tell was eventually bought by an American officer stationed in Germany, and brought back to the States.

Here his presence set off a kind of international incident that rages to this day; you might say that Tell gave rise to the blues, in more ways than one!

The dog christened Cäsar von Gaiberg was a very dark Weimaraner, and today he is known as the originator of the U.S. Blue Weimaraner.

The AKC registered Tell after accepting his German Weimaraner Club papers which proclaimed him a purebred.

History tells us that somewhere along the line, however, the Germans revoked or somehow impugned Tell’s purebred status, based entirely upon his legendary coat.

This new train of thought advanced the notion that Tell’s coloration was actually due to cross breeding.

Conversely, some chalk Tell’s blue hue up to a genetic mutation. Still, others contend that his blue-ness had always been known as the coloration “mouse-gray” in Germany, thus the furor being a big ado about nothing.

But the tempest in a teapot was not destined to fade away (pun intended!).

As a result of the Tell overture, so to speak, the Weimaraner Club of America in 1971 disqualified the Blue Weimaraner coloration.

Since this time, the issue of the true origin of blue within the Weim world has been at play, as much is at stake.

The disqualification decision made by the Weimaraner Club of America led to a number of exclusions from various global canine events, so an ongoing debate continues to percolate within the community over what Blue means, and what should (or shouldn’t) be done about it.

Which of the three above-mentioned theories best explain the origin of Tell’s blueness?

No one can be certain, since no incontrovertible evidence has surfaced in the case of the Blue Clue quest.

Many experts believe that the mystery behind Tell’s blueness is a secret that went with him to the grave, pointing to the fact that many records and documents were casualties of WWII, the time of Tell’s rise within the Weim world.

So, that explains why Blue is a maligned color within the world of Weimaraners. But it doesn’t tell the whole story!

While Blues are black (blue) sheep of the Weimaraner world, they are not entirely shunned from the upper echelons of the canine universe.

In the U.S. these beautiful creatures can be registered with the AKC, although they are not eligible to participate in all events.

The good news is that the offspring of two AKC-registered Weimaraners are officially recognized as purebred, regardless of color.

Sadly, other countries show a greater disdain for the misunderstood short-haired Blue boys and girls. These wonderful animals are rare outside of America, and not officially recognized in other regions.

Now it’s time to stop arguing mutant genes and color samples, and take a look at what makes the Weimaraner a breed you may (or may not) want to welcome home into your family!

The loyal and lively Weimaraner has a high canine IQ that can work in your favor- but also against you- if your pooch is not properly trained and socialized. In fact, the AKC describes this member of the Sporting Group as obedient but fearless.

The same intelligence that can be a delightful trait when channeled into pleasurable activities like mutual playtime at the dog park, can also manifest as a stubborn streak in this independent-minded breed.

Early training is needed in order for this strong-willed dog to become a well-mannered animal companion.

Weimaraners are athletic and full of stamina, as befits a hunting dog.

As such, they require daily exercise. But this built-in need for activity doesn’t mean that Weimaraners should be left alone to run around in the yard all day or night.

They thrive on human interaction and potential owners should want a doggy buddy, not just an exercise companion or working watchdog.

This is because affectionate Weims are people-pleasers who need to know that they are a part of the goings-on in order to be happy.

Ignore one at your own peril, for a bored or upset Weimaraner can become a destructive one.

Luckily, they get along fine with children and other animals (with proper training and socialization), although they can be a bit territorial and should be watched in case their inbred prey drive kicks in while they are out and about.

Weimaraner pups have an average life expectancy of 10-13 years. Males reach about 25-27 inches tall while females are just under that at around 23-25 inches tall.

Weims have hearty appetites and should be fed a high-quality, high-protein diet.

Short-haired Weimaraners have a low maintenance, smooth coat but need regular brushing to keep the fur healthy and bright.

On the other hand, the gray and blue long-haired Weimaraner should be brushed daily to keep the fur mat-free.

Weims are average shedders and are not considered to be a hypoallergenic breed.

So, now that you know a bit more about the extraordinary Weimaraner breed, are you perhaps thinking about welcoming one into your home?

Let the buyer beware: Blue Weimaraners are not “rare,” even though some breeders market them as such, sending the Blue Weimaraner price skyrocketing!

Likewise, when it comes to Weimaraner health, all shades are on a level playing field in regard to the same medical issues and concerns. 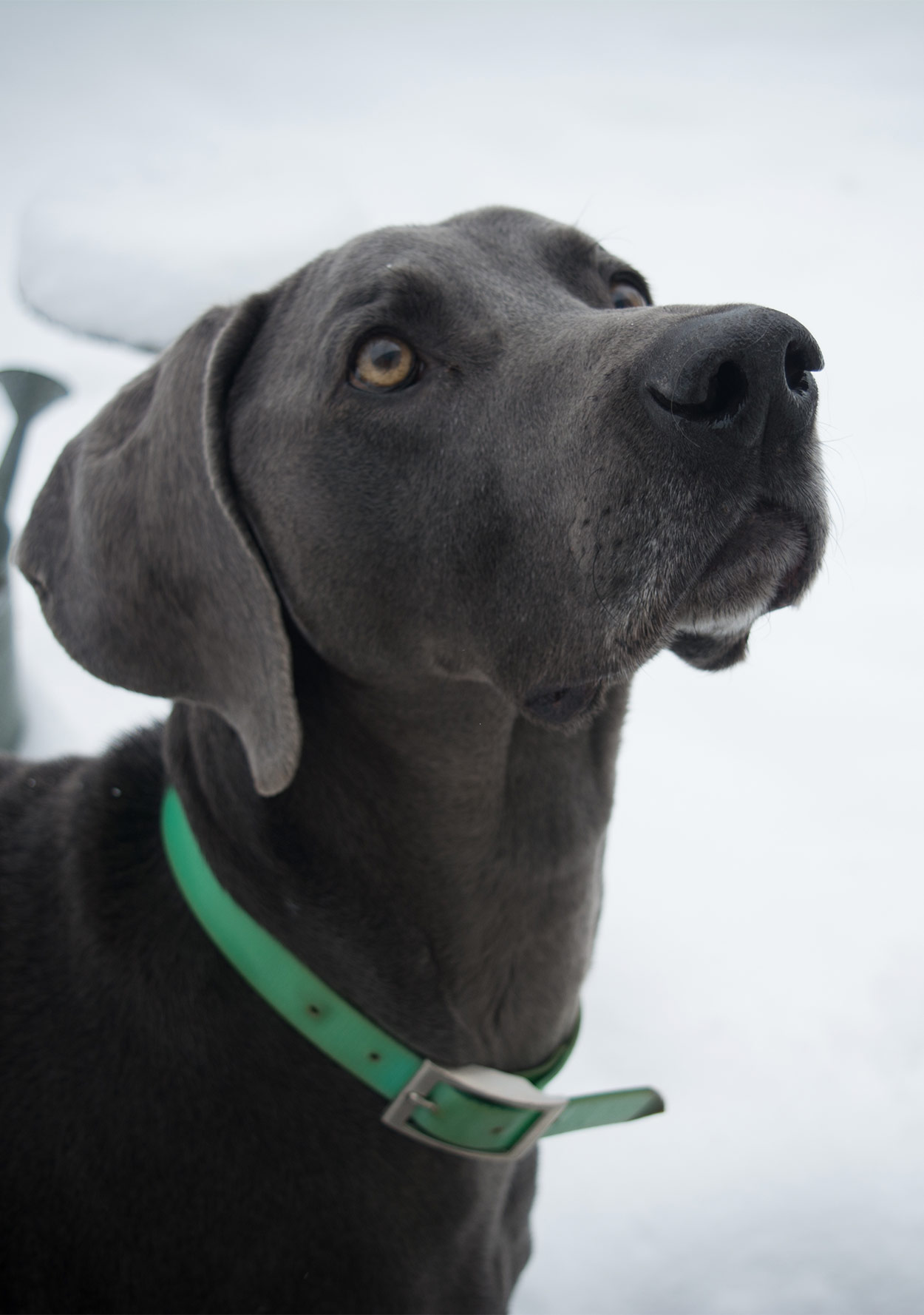 It goes without saying that potential owners should work exclusively with responsible breeders who are able to provide health clearances.

The Blue Weimaraner Club of America requires its breeders to obtain and make available hip and elbow scores (although dysplasia is not a major concern in the breed), as well as provide a complete medical history, including vaccination information.

The AKC website describes Brucellosis as a contagious disease caused by the bacterium Brucella canis. It is a global affliction and can be transmitted from dogs (both purebreed and mixed) to humans.

Other animals including sheep, cattle, and goats can also contract the virus.

Weight loss and lethargy are generalized symptoms, with inflammation of the organs (heart, skin, brain)The insidious virus can also attack the spleen, liver, and lymph nodes.

Still, it is possible for some infected dogs to not exhibit any symptoms at all.

Brucellosis is transmitted among dogs mainly through contact with infected body fluids, with the virus entering the body via the mucous membranes.

A simple blood test can detect the virus but unfortunately there is no cure for canine infection. Sadly, since the disease can spread to humans, euthanasia of an infected animal is often recommended.

Another potentially deadly condition, bloat, is common in deep chested dogs like the Weimaraner.

It is a condition in which the stomach becomes twisted, and symptoms include a swollen stomach, lack of bowel movement, and general distress.

Left untreated, the painful condition can be lethal.

The Blue Weimaraner – To Buy or Not To Buy?

Is a regal, Blue Weimaraner in your future? Only you can make that all-important decision to add to or start a canine family, but we hope that our descriptive data on the Weimaraner breed can help you reach an informed decision.

The highly intelligent, people-loving Weimaraner is not for everyone. Unlike the lovable, easygoing Lab, he has a bit of a high-maintenance personality and a high need to be included in whatever his human is doing. In return, this affectionate dog is loyal to and protective of the human lucky enough to belong to a Weimaraner.

Since he is a people-oriented dog, the Weimaraner can be expected to be obedient as long as he has received the proper and early training and socialization needed to become a well-mannered, well-adjusted pooch.

Finally, don’t let the lean, lithe body fool you: Weims are the epitome of athleticism and require daily exercise. In addition to physical exertion, Weimaraners enjoy mental stimulation and if left to their own devices may resort to mischievous and/or destructive ways to entertain themselves. 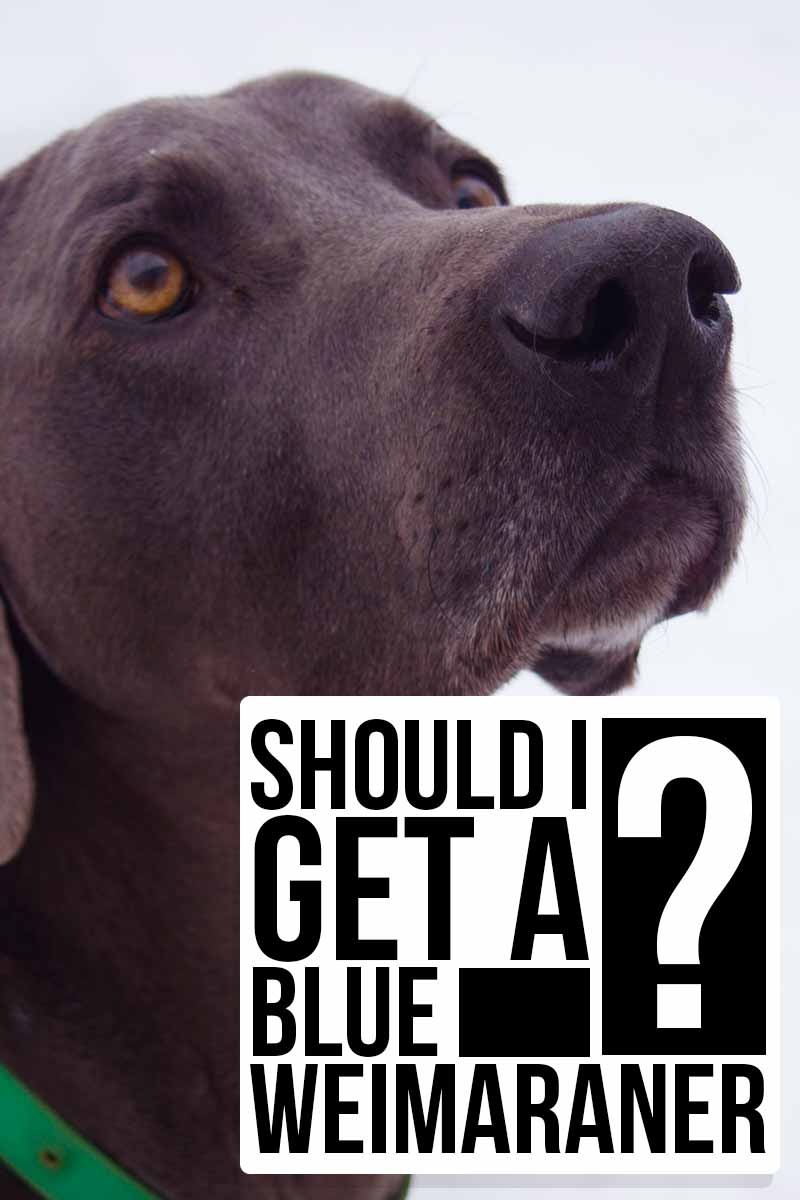 Do You Have A Blue Weimaraner Puppy?