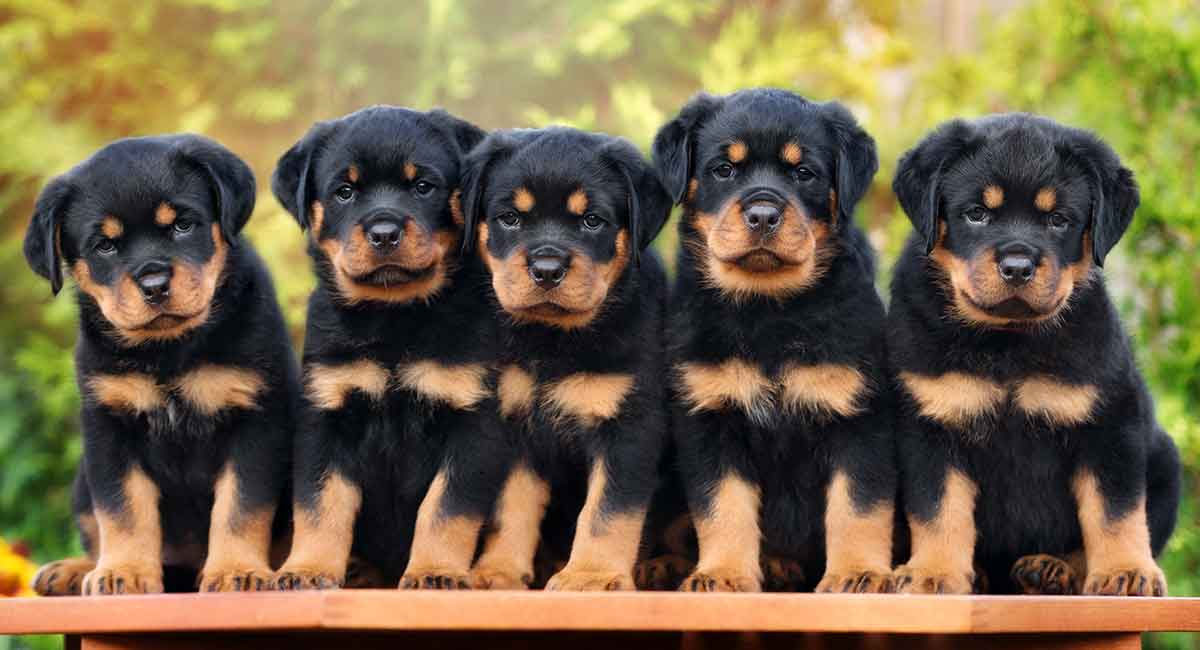 The Rottweiler is a large and muscular breed that is very popular and well loved within families across the globe.

With their potential to be incredibly loyal and loving dogs, the Rottweiler can serve both as a gentle member of the family and a serious protector of the home.

However, there are many who are concerned about certain aspects to this breed, especially their temperament.

Many may have heard the Rottweiler described as an aggressive breed, but is this true?

In this article, we will be taking a detailed look into everything you will need to know about the potential temperament and behavior a Rottie may exhibit.

So let’s get started.

While Rottweilers can vary in temperament from one another, there are some traits that are common within the breed that you should expect.

As mentioned earlier, the Rottweiler can potentially be a breed that bonds strongly to their family, exhibiting unshakeable loyalty towards them.

A properly raised Rottie will unconditionally love and depend on their owners.

Many Rottweilers tend to be confident dogs, provided they get effective training and socialization.

However, they may act guarded and aloof when it comes to strangers of both the human and canine variety.

With their confidence comes the fact that many Rotties are dominant dogs, not only to other pets within the home, but towards their owners, as well, if it is not dealt with at an early age!

As both an independent and intelligent breed, the Rottweiler requires an experienced hand for control.

Letting a dominant-minded dog run unchecked within the family can lead to many negative behaviors.

Apart from these traits, it’s important to realize that there can be quite a lot of variation in the personality of Rottweilers.

Some tend to be natural entertainers who love to play, while others may be much more reserved and calm.

Are Rottweilers Easy To Train?

Due to the fact that there can potentially be many behavioral problems within this breed, training and socialization is vital to ensure a Rottweiler puppy matures into a well-mannered adult.

Otherwise, the Rottweiler may attempt to become the dominant member of the family.

Their territorial/guarding behaviors will be uncontrolled, and in the worst case, they may have aggression issues.

So how easy is the Rottweiler to train so you may avoid all this?

While Rotties are very intelligent, meaning that they can certainly soak up anything you teach them, they’re an independent breed who can be stubborn.

They may sometimes just choose not to show any interest!

Because of this, the main hurdle in training Rottweilers is keeping their attention on you.

Rottweilers may require a firm hand to ensure they understand that you’re the dominant one within the family and not them.

Positive, reward-based training is the best method in training a Rottweiler effectively.

The breed may require a lot of patience, but with repetition, they will eventually come around.

Remember that if you’re struggling to train a Rottweiler, do not just give up.

If you feel you aren’t up to the task, hire a professional.

Leaving a dog untrained is not good for your family or your dog.

Rottweilers are naturally wary and aloof towards strangers.

Most Rotties will not be the type to run around the park seeking affection from every person they see.

To prevent this developing into a problem, you must socialize your dog from an early age.

Slowly exposing the Rottie to new people, dogs, and situations can help let your Rottweiler get used to meeting strangers and learn the behavior expected of them in such situations.

If not socialized, this can cause the development of aggression towards strangers, along with excessive guarding behaviors.

It is very important that your Rottweiler receives this training in full.

Provided that they have been socialized correctly, many Rotties are friendly with strangers as long they are respectful of the dog and calm.

Tell any interested strangers to let your Rottie give them a sniff and become a bit more used to them before they try to give any pats.

As you most likely have heard, Rottweilers have somewhat of a reputation when it comes to aggression.

Along with other breeds, Rottweilers have been represented as a potentially dangerous dog due to reported cases of aggression.

But is the entire breed aggressive?

Looking at scientific research into the matter, it is certain that aggression can be present within the breed.

Here are some facts and statistics from various studies on the matter:

Rottweilers have been the culprit of serious dog attacks on children.

Within the Children’s Hospital of Philadelphia in 1989, Rottweilers accounted for 5.4% of all serious dog bites within that year.

The breed is banned by some insurance companies, due to concerns about its aggression.

In Ireland, the breed is restricted, and they require that the dog is muzzled in public places.

Rottweilers have an incredibly strong bite.

One that can reach up to 450 pounds of pressure.

They have been found to be potentially aggressive toward both humans and other animals.

Attacks from Rottweilers have led to fatalities.

In a study performed by the AVMA, 50% of all dog attack fatalities in the United States between 1979 and 1998 were attributed to either Pitbulls or Rottweilers.

Most victims were children.

With this information, it is easy to see that there at least exists a predisposition towards aggression within the Rottweiler breed.

On top of that, they are a very dangerous dog to be attacked by.

Not All Rotties Are Aggressive

However, it is impossible to state that every dog of this breed is aggressive, as that simply wouldn’t be true.

There are plenty of families out there with who have never had a problem with aggression in their Rottie.

There are a lot of factors that go into what may cause a dog to be aggressive.

While breed predispositions can be one of them, it can also come down to their upbringing, level of training/socialization, and the circumstances of any given situation.

Aggression May Get Passed Down

It’s also worth noting that aggression, along with other negative temperaments, may be passed down through lines of dogs.

For example, if the Rottweiler puppy’s parents are aggressive, there is a higher risk the puppy may also develop aggression.

To ensure aggression doesn’t become a problem in a Rottweiler puppy there are a few things you can do.

First, be sure to purchase the puppy from a trusted and responsible breeder.

If they are recognized by reputable and well-established breeding societies, this can be a good sign.

Ask to see the parents and gauge their temperament.

Any aggressive or overly guarded nature within them can be a red flag.

Another thing you should do to help lessen the chances of aggression is to train and socialize the dog effectively.

Lastly, avoid rough play with the puppy while it grows.

While it may be fun for both you and the dog, it may encourage aggressive behavior later in life.

Due to the concerns with aggression, we would advise against housing a Rottweiler with young children or other pets.

We would also heavily recommend that potential owners of this breed have experience handling independent and powerful, dominant dogs.

This is not a breed for first-time owners.

While the Rottweiler is naturally wary of strange dogs, with good training they can learn to be calm and accepting of other dogs in their presence.

Socialization is again the key to ensuring that the Rottweiler does not engage in aggressive behavior with other dogs.

There may be issues with the Rottweiler and dogs of the same sex.

Some Rottweilers can be aggressive towards dogs of the same sex.

For this reason, even if your Rottweiler seems calm, always keep them on the lead if you are in a public area.

If socialized together from a young age, many well-trained Rotties can get along well with other pets in the family, although they may still have issues with dogs of the same sex.

As a side note, some Rottweilers may be predatory towards smaller pets such as cats.

If you do have a cat within the home, early socialization is key to ensure this behavior does not surface.

The Rottweiler breed has worked as a herder and guard dog for millennia, and due to this, Rotties of today still harbor some strong instincts from their past.

These instincts can significantly affect a dog’s behavior if they are not controlled or expressed in a positive way.

For example, due to their background as a herder, many Rottweilers have a base instinctual urge to herd.

When they are a family companion animal, the dog sees the family as their flock that they must protect.

The main issue with this instinct within the context of the family home is that they may try to herd children and guide them.

This can lead to them leaning on the children, or bumping them to go a certain direction.

In severe cases, they may even nip at the children.

For this reason, we would not recommend housing this breed with particularly young children.

As this breed is so large and heavyset, even a simple bump could knock a toddler over and cause injury.

These herding behaviors also lead into the guarding and territorial behaviors we have already described.

The Rottie is simply following its instincts and protecting what they see as their flock.

However, if these are instincts are not controlled effectively, they may lead to negative behavior.

A Rottweiler with uncontrolled guarding and territorial behaviors may be overly suspicious of strangers, leading to aggressive behaviors towards them.

Seeing their home as their territory, any animal or person that enters it may be subject to aggression.

It’s also possible for a Rottweiler to feel a need to guard other things, such as their food bowl or toys, for example.

This is where the Rottweiler is stimulated by fast movement and has a strong urge to chase it down.

This could refer to anything moving with speed, such as cars, kids, and joggers.

Due to this, obedience training is vital to ensure that you can control your Rottie’s natural urge to chase.

We would also recommend not letting this breed off the leash unless you know you are in a secure area.

Again, training and socialization from a young age is key to quelling these instincts and behaviors before they become a major problem.

Always ensure that your Rottie is receiving the best training possible either from you or a professional.

Rottweilers can potentially be loving and fulfilling family pets, but only if you are able to raise them correctly.

This is not a breed for first-time owners.

Rottweilers require an assertive and firm owner to ensure that they are the dominant member of the family and not the Rottie.

Training and proper socialization are critical for this breed to mature into a well-behaved dog.

If you are looking at Rottweilers as a potential family pet, consider your family situation and your experience handling dominant dogs.

This is not a decision to be taken lightly.

You must consider whether they would be a good fit within the family and whether you will be able to raise them properly.

What do you think of the Rottweiler breed?

What personality does your Rottweiler have?

Blackshaw, JK, An overview of types of aggressive behavior in dogs and methods of treatment Applied Animal Behavior Science, 1991

Sacks, JJ, et al, Breeds of dogs involved in fatal human attacks in the United States between 1979 and 1988 Journal of the American Veterinary Medical Association, 2000