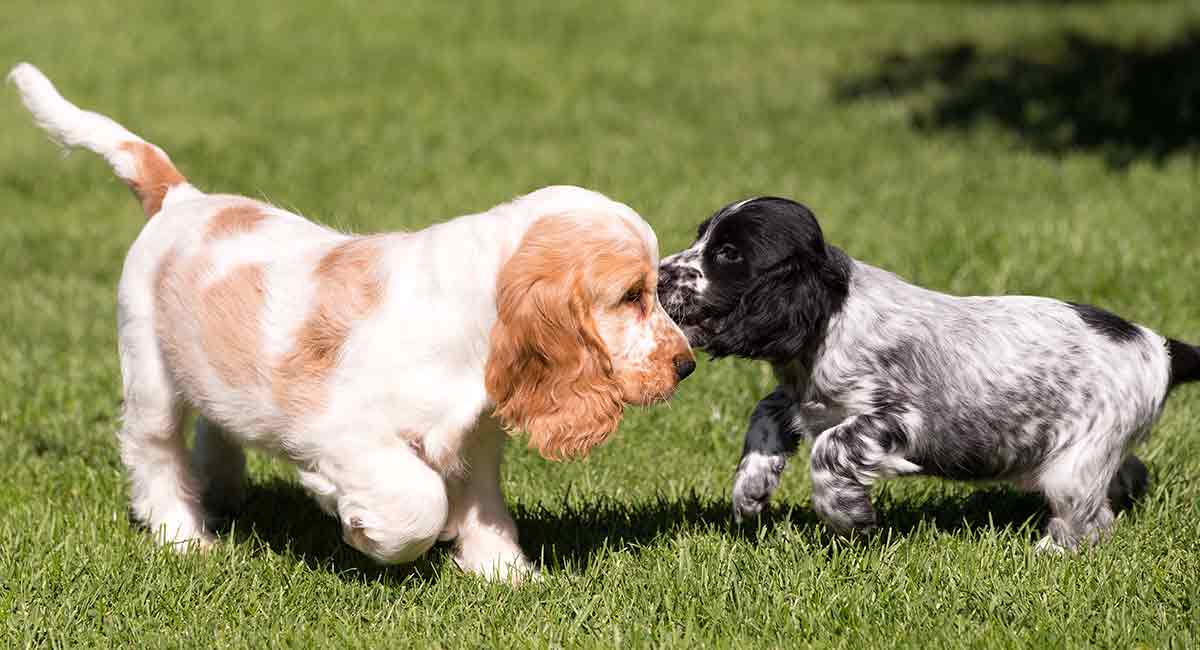 The range of gorgeous English Cocker Spaniel colors include:

But not all of these are ‘official’ colors. The lemon and white, red and white, sable, sable and tan, and sable and white are not considered standard. Blue roan is the most popular color choice.

Lemon, golden, orange and red Cocker Spaniel coat colors are all somewhat related on the genetic level. They have the same location on a chromosome and are produced by recessive genes. However, the way they are paired with other color genes (and thus the way we see them) is quite different.

As you can imagine, the golden shade is sort of in the middle of the four colors. It is not as light as lemon, but not as dark as red. A golden English Cocker Spaniel usually has a black nose.

This is a much deeper shade of golden, and in some cases, it can be as deep as the red of an Irish Setter. Red English Cocker Spaniels have black or liver colored noses.

A black English Cocker Spaniel is completely black. Sometimes they have a little white on their throat, and this is still acceptable for show purposes. The nose and rims of black Cocker Spaniels’ eyes are black in color. The eyes will be very dark brown, if not black too.

English Cocker Spaniels were bred for two main reasons: for show and for sport. Because of this, there may be some slight differences in personality between the two types.

An English Cocker bred for hunting is often more energetic and needs more stimulation before he calms downat the end of the day. English Cocker Spaniels bred for show, on the other hand, are typically more placid and relaxed around the home.

Still, neither are couch potatoes. Both types will need exercise before they’re willing to lay around the house.

It is for this reason that researchers decided to study the relationship between aggression and English Cocker Spaniel coat colors.

The Campbell test has five parts, each of which observe a puppy’s reaction to the behaviors of the test leader. For instance, one part of the Campbell test involves gently holding a puppy on its back so that it cannot get up.

Potential reactions to this include:

Overall, the study found that males are more dominant than females regardless of their coat color. Secondly, coat color does have an effect on dominance, with golden being the most dominant. Followed by black, and particolor being the least dominant.

The study also found that dominant behavior is a heritable trait which is more likely to be passed on by the dam than the sire.

Backing Up The Correlation

The results of this study coincide with an earlier study performed in 1997, which also found that solid colored English Cocker Spaniels were more aggressive than particolored ECSs. There were 13 total types of aggression surveyed, which included:

The study found that solid colored English Cocker Spaniels were more aggressive than particolors in 12 out of the 13 contexts. That is, all except for number aggression towards strange dogs.

Furthermore, golden/red English Cocker Spaniels were recorded as more aggressive than black colored Cockers in a number of situations, including scenarios 1, 4, 5, 7, 8, 9, 10, 11, 12, and 13 as indicated above.

The 1997 study also appears to consider red and gold as the same color, or at the very least groups them together as the most aggressive. However, the ECSCA and the AKC identify them as separate colors.