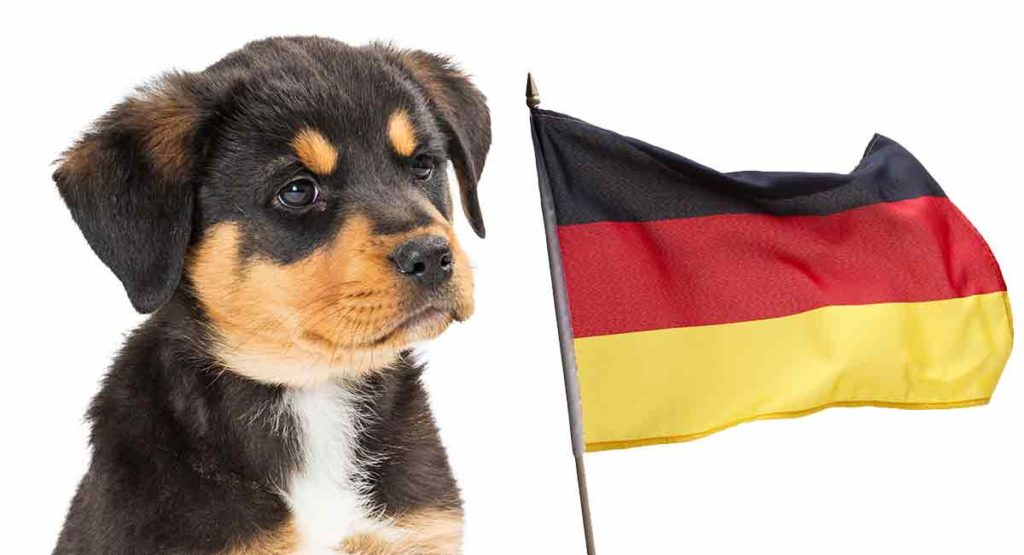 The Rottweiler’s journey through history has been long and rocky.

From fierce beginnings that date all the way back to Roman times, to respected police dog at the start of the 20th century.

In this article we trace his paw prints from medieval times to present day.

Today the Rottweiler has earned respect for his many accomplishments.

According to the American Kennel Club (AKC), the Rottweiler ranks as America’s 8th most popular breed.

This informative article delves into the fascinating history of this well-loved large canine.

We’ll look at why, and for what purpose, Rottweilers were originally bred.

How Rottweiler history has impacted their character and their suitability as family pets?

If you’re ready to take a closer look at the Rottweiler breed history, read on.

In its heyday Roman Empire was the most far-reaching political and social structure in western civilization.

Dog breeding was one of many things that changed forever during this time.

As large Roman armies marched across Europe, the soldier’s food supply, in the form of live cattle, accompanied them.

Drover dogs are one of the oldest dog breeds and were believed to be of an Asian Mastiff type.

It was their job to guard the herd from predators, ensure the cattle didn’t stray, and keep them moving for long distances during the day.

These dogs possessed a strong guarding instinct. They were also intelligent, rugged, and displayed impressive endurance.

Although there is no documented proof, it’s believed that these dogs were the breeding stock used to develop the ancestor of the Rottweilers we know today.

Where Does the Name Rottweiler Come From?

The town of Rottweil, located east of the Black Forest in southern Germany, dates back to Roman times.

In the centuries following the collapse of the Roman Empire, drover dogs worked herding cattle and protecting them from rustlers on the way to market in Rottweil.

The town’s central location made it an important market place and trade center for grain and livestock.

Farmers and other tradesmen traveled great distances to do business there.

The name appears to be derived from the word “rot” for the red tile roofs on many of the buildings, and “wil,” for the Roman word for villa.

The Rottweiler takes its name from the town of Rottweil,

Once the cattle were slaughtered, the drover dogs would haul butcher’s carts full of meat from town to town.

After the meat was sold, the money purses would be tied around the dogs’ necks to protect it from thieves.

It was during this time that these working dogs earned the name Rottweiler Metzgerhund, or the Butcher’s Dog of Rottweil.

Numerous local dog breeds who lived around Rottweil at the time were also bred with the drover dogs.

Breeds who are likely a part of the Rottweiler’s ancestry include the Bernese Mountain Dog, Greater Swiss Mountain Dog, Appenzeller, and Entlebucher.

Modern breeders believe that the dogs the Romans introduced here were the ancestors for many of the German breeds.

Rottweiler History in the 19th Century

The Rottweiler was a well-utilized working breed until the rise of industry in the mid-19th century.

Railroads replaced the need to use dogs to get livestock to market.

Cattle herding was outlawed, and the Rottweiler was out of work.

As the customary jobs of the breed were eliminated, the Rottweiler population declined dramatically—nearly to the point of extinction.

Reemergence Of the Rottweiler In History

Thanks to their endurance, intelligence, and strength, the breed survived and Rottweiler history continued.

At the start of the 20th century, the Rottweiler’s talents were once again put to good use in a whole range of new jobs.

When different breeds were tested to work in police service, the Rottweiler excelled.

In 1910 the Rottweiler received recognition by the German Police Dog Association as the fourth official police dog.

Rottweilers were also one of the first breeds to become guide dogs for the blind.

It was through his aptitude for these jobs that the modern Rottweiler developed.

From near extinction to national commendation, dog lovers and skilled breeders can take much of the credit for the Rottweiler’s surge in popularity.

At the start of the 20th century, dog breeding was no longer done merely for the purpose of producing a working canine.

Breeders who appreciated dogs started to cultivate and advance their favorite breed out of love and to improve the breed standard.

Despite the many functions that the Rottweiler has performed over his long history, he has changed surprisingly little in appearance and temperament since the first German breed standard in 1901.

Recognition For the Rottweiler

In 1907 a club was formed in Germany to safeguard the purity and welfare of the Rottweiler breed.

Planned breeding began, and breeders began to focus on the breed’s appearance.

Breeding records were organized, and the standard was fixed to preserve the Rottweiler’s working qualities.

A number of German Rottweiler Clubs joined to create the Allgemeiner Deutscher Rottweiler Klub (ADRK) in 1921.

This is now the only nationwide association for the breed in Germany.

The ADRK is known to have very strict rules. For example, they will not recognize a dog as a Rottweiler if they have a docked tail.

German Rottweilers also tend to be slightly larger than American ones.

Rottweilers were employed by the German army during World War I as messenger, ambulance, draught, and guard dogs.

Rottweiler Dog History in the UK

The first Rottweiler was brought to the UK in 1936 by Thelma Gray of the Rozavel kennels.

Mrs. Gray imported more dogs until the outbreak of World War II in 1939.

At that time the dogs were sent to Ireland for safe-keeping.

However, when the war ended, those dogs couldn’t be traced.

Captain F. Roy Smith of the Royal Veterinary Corps brought the first post-war Rottweilers back to the UK in 1953.

Eventually many more Rottweilers were imported from Europe and a breeding pattern was established.

It wasn’t until 1965 that the Rottweiler was registered by the UK Kennel Club as a breed in its own right.

Rottweiler History and Impact On the Breed

Despite some Rottweilers being thought of as attack dogs, this reputation for being vicious and mean is a not a true representation of the Rottweiler breed’s temperament.

Only Rottweilers who have been taught to act aggressively and attack will do so.

Their innate desire to please and protect means that Rottweilers are quick to learn.

Socilaizing your Rottweiler puppy from an early age and teaching them good behavior using positive reinforcement techniques will ensure they grow up into a composed and well-mannered dog.

Early Socialization In the Rottweiler

Rottweilers like to take their time and adopt a wait-and-see attitude with strangers.

However, a well-trained Rottie will not automatically be aggressive towards someone they don’t know.

Early socialization from puppyhood is key for any breed, but is especially important for a large, powerful dog like the Rottweiler.

When they are trained properly, socialized early, and exercised appropriately from a young age, Rottweilers are calm, confident, and courageous.

Loyalty is another trait that the Rottweiler is known for.

They are incredibly devoted to their family and will fearlessly protect their home and those they love.

They have a natural guarding instinct that can be traced back to their ancestors and it makes them exceptional watchdogs.

In the 1990s the Rottweiler was ranked as America’s second most popular breed for two years running.

At the time, more than 100,000 were registered with the American Kennel Club.

In 1985 the first Good Dog Carl book was released. Today there are over 20 books in this popular children’s series written by Alexandra Day that feature Carl the Rottweiler.

Rottweilers bravely served as search-and-rescue workers after disasters like the Oklahoma City bombing and the terror attacks on the World Trade Center on 9/11.

In 2015, a study of female Rottweilers at Purdue University provided important clues for longevity in humans.

Do You Have Any Interesting Rottweiler Facts?

We hope you’ve enjoyed this potted history of the Rottweiler breed.

If you’d like to find out more about Rottweilers as pets, check out our complete breed review.

If you’ve got some more insights on Rottweiler history, please share them in the comments box and help tell their story!

Horisberger, U., et al. “The epidemiology of dog bite injuries in Switzerland – characteristics of victims, biting dogs and circumstances,” Journal of the International Society for Anthrozoology, 2015

Crookes, D., “A short history of the ‘dangerous dog’ and why certain breeds are banned,” BBC Newsbeat, 2016