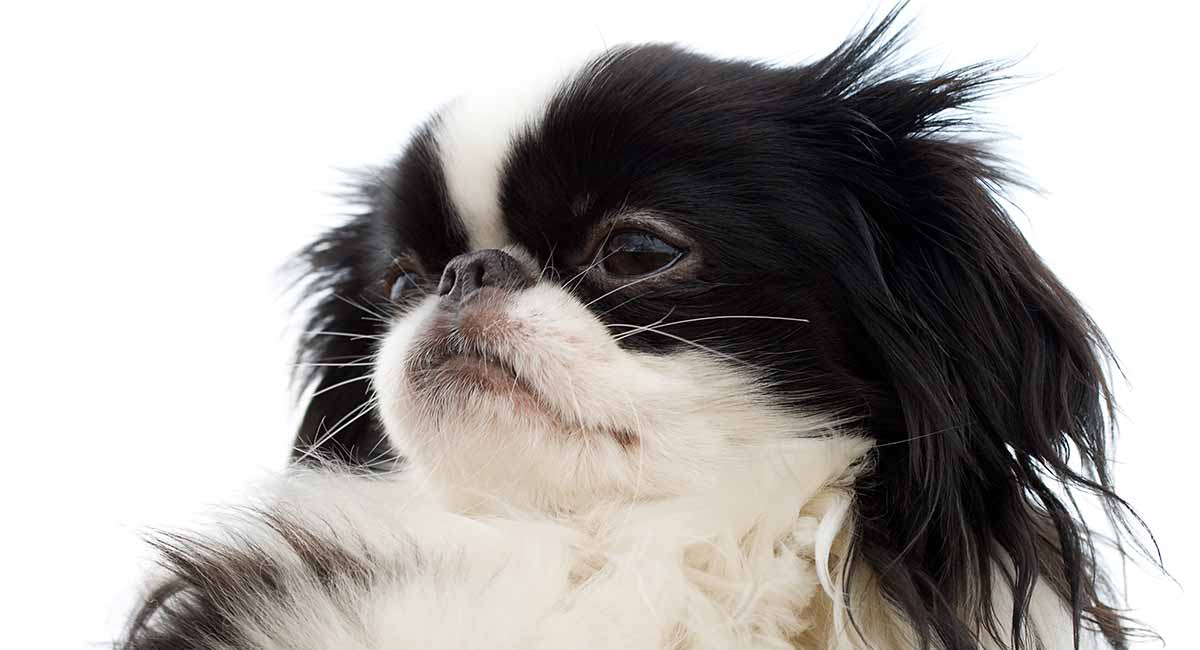 The Japanese Chin is a toy dog breed. It has been a popular companion breed in Asia for more than a thousand years.

Japanese Chins typically weigh from 7 to 11 pounds and stand between 8 to 11 inches tall.

With their abundant, silky coat, flattish face, and wide-set eyes, they bear the unique look of an Asian breed.

What makes them unique is their many cat-like qualities. Such as their penchant for climbing and perching in high places.

So let’s take a closer look at this little breed, to find out if they’re right for your family.

Where Does the Japanese Chin Come From?

There is a lot of speculation about the Japanese Chin’s origins.

Despite their name, it seems that the breed originated in the Chinese imperial court as long as 1,500 years ago.

Like the Pekingese, this royal breed was bred to warm the laps of Chinese aristocracy.

Theories diverge on how the Chin ended up in Japan.

However, it’s quite possible that Chinese emperors gave them as gifts to visiting Japanese dignitaries.

Development of the Breed

But, regardless of how these dogs arrived in the country from which they get their name, it’s agreed that Japanese nobles were responsible for developing the breed.

Small spaniel-type dogs were likely used to get the appearance we see today.

In Japan these dogs were so highly esteemed, they were not seen as dogs. Rather they were ‘chin’—their own separate entity.

The breed was introduced to the west in the 1850s.

President, Franklin Pierce was one of the first American owners of the breed.

In the U.S., Chins were known as the Japanese Spaniel until 1977.

Fun Facts About the Japanese Chin

Chins are known for their impish antics. When very excited they’ll do something known as the “Chin spin,”. This is turning around in circles, sometimes on their hind legs.

Japanese nobility would use small Chins as ornamentation. They kept them in hanging cages typically used for birds.

Chins have an incredible ability to climb. So, don’t be surprised to see one overseeing their domain perched on the back of a sofa.

The breed’s other cat-like habits include washing themselves and batting objects with their paws.

The Japanese Chin is one of several Asian flat-faced toy dogs. These are brachycephalic breeds.

They have a broad, domed head, large, protruding eyes, and short muzzle. This gives them a somewhat human-like quality, which many people find appealing.

Unfortunately, this also causes some serious health problems. But, we’ll look into this shortly.

The Chin’s single coat is thick and moderately long, with a silky texture.

A thick mane around the neck and shoulders, feathering on the ears and legs, and a plumed tail arching over the back are distinctive breed traits.

Small but sturdy, Japanese Chins move with a bouncy gait. They stand from 8 to 11 inches tall and weigh just 7 to 11 pounds.

The Japanese Chin is an overall happy and friendly dog. He gets along with everyone, including other dogs and pets.

However, their small size can leave them prone to injury from larger breeds.

This is also true of young children who can accidentally drop or step on such a small dog.

Highly sensitive, it’s been said that the Chin will naturally adapt to their environment. So, they are serene in a quiet home and livelier in those where there’s more action.

But these dogs love nothing better than to curl up in the warm lap of someone they love.

Chins may have a tendency to be shy around strangers or unfamiliar situations. Plus, like any dog, they need early socialization.

This breed is very loyal to their family. But, this means they may suffer from separation anxiety if left alone for very long.

Charming, noble, fun-loving, smart, stubborn, mischievous, and downright comical. The Japanese Chin loves to entertain and expects their antics to be noticed and appreciated.

The intelligent Chin is quite trainable and responsive. If he wants to be.

These dogs can have a mind of their own. So, if they become bored, they will often find something more entertaining to amuse themselves.

As with many toy breeds, housetraining can be difficult.

Consistency is important. So are positive training methods that use food and praise as rewards.

Training and socialization should start early.

The Japanese Chin has fairly low exercise needs. But, they still need daily activity in the form of slow walks or play sessions to keep them fit and healthy.

This makes them a good match for older adults who aren’t able to provide a dog with more vigorous exercise.

The Japanese Chin’s flat face means they’re prone to heatstroke. Plus, they are unable to handle excessive heat and humidity.

So, they should never be exercised outdoors on hot days.

Toy breeds also have delicate necks and using a harness is preferable to a collar during walks.

The Japanese Chin has an average lifespan of 10 to 12 years.

Like all breeds, they’re at risk for certain genetic health conditions.

This is why finding a reputable breeder is so important. Choose someone who is able to prove that their breeding stock have been tested and cleared for the following health concerns.

Patella luxation is common in toy breeds like the Chin.

It occurs when the kneecap is dislocated from the correct anatomical position. This can cause lameness or an abnormal gait. Severe cases may require surgery.

Eye diseases such as cataracts and progressive retinal atrophy may also affect the breed.

Heart murmurs are often an indicator of mitral valve disease. A weakened heart valve can leak blood and strain the heart.

But, if diagnosed early, medication and maintaining a healthy weight can reduce symptoms.

This inherited disorder progressively destroys cells of the brain and nervous system. Once affected, dogs show symptoms such as loss of balance and vision loss.

The disease progresses rapidly and dogs typically die within months.

Being a brachycephalic breed with a short nose and flat face also puts them at risk for a number of additional health problems.

Brachycephalic Obstructive Airway Syndrome is a chronic respiratory disease in which the airways are blocked due to the short facial bones altering soft tissue structures.

This can lead to severe respiratory problems. Plus, it is why brachycephalic dogs will snort, sniffle, and cough.

The Japanese Chin’s long, silky coat looks high-maintenance. But, it rarely mats and is fairly easy to care for.

They require only weekly brushing to remove loose hairs.

The Chin’s nails will grow quickly. So, clip them once or twice a month.

You’ll know it’s time when you can hear their nails on the floor.

Check their ears for signs of infection, such as odor, redness, or swelling on a weekly basis.

Like other toy breeds, the Japanese Chin is prone to periodontal disease.

Being a brachycephalic breed further exacerbates the problem due to extreme teeth crowding.

Brushing their teeth at least two or three times a week will remove tartar buildup. Plus, it will reduce the chance of gum disease.

Little dogs can be prone to obesity. So, even a small amount of excess weight can increase their risk for the numerous health problems.

The Japanese Chin is a loving dog.  It is a family-oriented, devoted breed.

They make wonderful pets for seniors who have the time to dedicate to a pet who thrives on attention and is prone to separation anxiety if left on their own too often.

Their small size means they are adaptable to any sort of living accommodations, including apartments.

Plus, the fact that they’re generally less barky then some other toy breeds, means they won’t annoy the neighbors.

Generally, they will be fine in homes with other pets. But those with young children would do better choosing a dog that’s less fragile than the tiny Chin.

Due to the severe health issues associated with the structure of the dog, we recommend rescuing an adult from a shelter.

Dogs wind up in shelters for all sorts of reasons.

Most of them will not be puppies. But, adopting an older dog offers plenty of benefits.

Sometimes they’ve already been trained by their previous owner.

And adoption is almost guaranteed to be less expensive than getting a puppy from a breeder.

Rescuing is a great way to find a pet because there’s no shortage of lovable dogs looking for a new forever home.

Searching for a puppy is an endeavor that should not be entered into lightly.

Doing research will end up saving you money and heartache in the long run.

Seek out a responsible breeder who has health certifications that prove their dogs have been health tested for genetic diseases.

They will love the Japanese Chin breed as much as you do and be happy to address any questions or concerns you have.

By no means should you purchase a puppy from a pet store, since they’re almost always supplied by puppy mills.

These commercial breeding facilities are notorious for their horrendous conditions and their puppies often have health and temperamental problems.

Our puppy care and puppy training guides are excellent resources.

They offer tons of important information on how to raise a puppy into a well-adjusted adult dog.

And on a lighter note, we have some great ideas for Japanese dog names over here.

Pros and Cons of Getting a Japanese Chin

Here are some small dog breeds that are similar to the Japanese Chin, but with a healthier conformation.

These rescues specialize in the Japanese Chin.

If you know of other organizations please include them in the comments section.

Is a Japanese Chin Right For Me?

They’re well-suited to any household where there are people at home for most of the day.

If there are young children in the family, ensure that they’re never left alone together.

Older children who know how to behave properly will be fine with this breed.

However, due to the health problems we’ve discussed, instead of getting a puppy, consider rescuing an older Chin in need of a loving home.

Do you have a Japanese Chin in your life?

Tell us about it in the comments.