You are here: Home / Breeds / Teacup Goldendoodle: Would a Tiny Version of This Popular Hybrid Suit You? 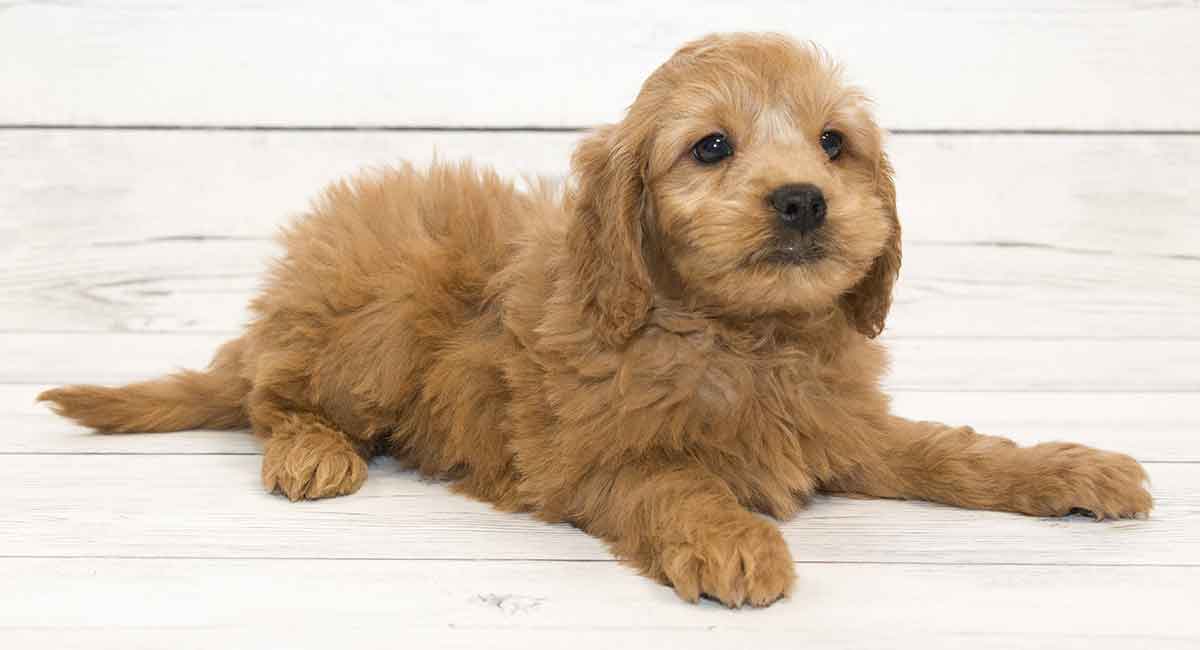 There are many reasons why someone might want a Teacup Goldendoodle.

The Goldendoodle is a relatively new breed of dog. This crossbreed is created by combining a Golden Retriever and Standard Poodle.

But they can be quite large. Most Goldendoodles weigh between 40 to 90 pounds and stand anywhere from 17 to 24 inches tall.

If a potential dog owner has fallen in love with this dog breed but lives in a small apartment, then a teacup version could be just what they’re looking for.

The Perks of Teacup Dogs

They need less space to run around in, have less hair and don’t have to walk as far to get their exercise in.

If you don’t have much time on your hands, this can be a lifesaver.

Many people also find themselves drawn to smaller dogs.

The smaller the dog, the longer it retains its puppy-like appearance. Their small size can make them quite adorable.

Teacup dogs are also easier to transport and don’t take up too much space in a car.

If you’re planning on taking your dog with you on many outings, then this is essential.

Where Do Teacup Goldendoodles Come From?

There are three major ways that Teacup Goldendoodles are created.

One of the most common ways is to mix them with another smaller breed. When two dogs are bred together, they can inherit traits from either parent.

If a Goldendoodle is bred with a smaller breed, then the puppies can be smaller as well. But they will likely also inherit other traits from the non-Goldendoodle parent.

Another way Teacup Goldendoodles are created is by introducing the dwarfism gene.

This can be very difficult to do and requires a lot of careful breeding.These dogs may not be smaller all around. But they will have shorter, stubby limbs.

Finally, some breeders create teacup dogs by repeatedly breeding runts together.When you breed smaller dogs together, they are going to have smaller puppies.

Each of these methods has its own difficulties and drawbacks. Let’s look at them all in turn.

This is perhaps the simplest way to a Teacup Goldendoodle.

When you breed two different dogs together, the puppies can inherit traits from either parent.

By breeding the Goldendoodle with a smaller breed, it is likely that at least a few of the puppies will be smaller as well.

How big will your Goldendoodle puppy grow? Click here to find out!

Of course, for safety purposes, you cannot breed a large Goldendoodle with very tiny dogs. It simply isn’t physically possible.

But it is completely possible to breed a Goldendoodle with a medium-sized dog or even dogs smaller than that, depending on the size of the Goldendoodle.

Mixed dogs are often healthier than purebred dogs, thanks to a process known as hybrid vigor.

Of course, once you mix the Goldendoodle with another breed, the puppies will cease to be Goldendoodles any longer.

They will likely exhibit traits from both parents, and might not even look or act like a Goldendoodle at all.

Let’s look at one of the most common Teacup Goldendoodle mixed breeds.

The Miniature Poodle is a go-to mix for creating a mini version of the Goldendoodle.

The Goldendoodle already has Poodle genes. So, mixing them with a smaller Poodle does not normally alter their appearance or personality very much.

Instead, what you’re often left with is a tiny version of the Goldendoodle.

Of course, no mixed breed is without its downsides. It can be somewhat difficult to breed these two dogs together due to their size difference.

This pairing requires an experienced breeder and might even have to be created using artificial insemination.

If you want a dog to be smaller, it might make sense to introduce the dwarfism gene. But this gene does not work the way that you might imagine.

Instead of making the dog smaller all over, this gene only affects a dog’s legs and a few other body parts.

This is why dogs like the Corgi and Dachshund have short, stubby legs.

Since the dwarfism gene doesn’t affect all parts of the dog’s body, skeletal problems may arise, such as spinal and hip diseases due to underdevelopment and joint problems.

Some dogs with dwarfism are even prone to hormonal abnormalities.

Dwarfism is considered a defect, and many health issues are common due to underdevelopment of bone structure.

These issues can lead to difficulty in moving, discomfort, and even pain in the bones and joints when growing into adulthood.

Because of this, it is not recommended to introduce the dwarfism gene while breeding.

While dogs who have the dwarfism gene will be smaller than their normal counterparts, they can also be affected by adverse health problems.

On top of this, it is extremely hard to introduce the dwarfism gene in the first place.

Mostly, it is a game of chance. Finding two breeding-age dogs of the opposite gender that both have the dwarfism gene is extremely difficult.

Developmentally, runts are the smallest dogs in the litter. Breeding two smaller dogs together often result in smaller puppies.

So, when a breeder wants to make a teacup version of a dog, it might seem logical to breed runts together to produce tiny puppies.

However, this has many drawbacks.

Runts are often not runts for no reason. Many of them are smaller than their brothers and sisters because of an underlying medical condition.

Many runts are smaller than average due to a heart condition, joint problem or genetic defect.

Others are small because they contracted a disease shortly after birth, which stunted their growth.

Whatever the reason, dogs who are tinier than average are normally not very healthy.

Breeding two of these runts together can lead to their puppies inheriting their disorder. This creates a litter of unhealthy puppies.

While these dogs will be smaller than an average Goldendoodle, they can suffer from a variety of health problems and might not even live to adulthood, depending on the extent of the problem.

Is a Teacup Goldendoodle Right for Me?

A Teacup Goldendoodle can be a healthy dog if it is bred using the right method.

We recommend only adopting smaller-than-average Goldendoodles if they are the result of crossbreeding.

The other methods can result in many health problems.

If you decide to adopt one of these teacup dogs, it is important to understand that they will still require quite a bit of care.

While smaller dogs have less hair to brush and need less exercise, these dogs are still very active and have grooming requirements.

Furthermore, if you adopt a puppy, they will need to be trained just like every other puppy.

While many people consider smaller dogs to be easier to take care of than larger ones, they still do require a lot of time.

These dogs can be suitable in smaller homes. But they are normally not as small as some other teacup breeds.

They are not usually suitable for apartment living and require quite a bit of room to run.

We recommend only purchasing your teacup Goldendoodle from a qualified breeder.

But this can be quite difficult. It is hard to find breeders that specialize in mixed breed dogs.

If you are having difficulties finding a breeder, you might want to consider adopting healthier breeds instead.

However, rescuing an adult Teacup Goldendoodle can be extremely rewarding.

And you’ll be able to see exactly how big the dog will be before committing to adopt him or her.

Fox, M.W., 1965, “The Pathophysiology of Neonatal Mortality in the Dog,” Journal of Small Animal Practice