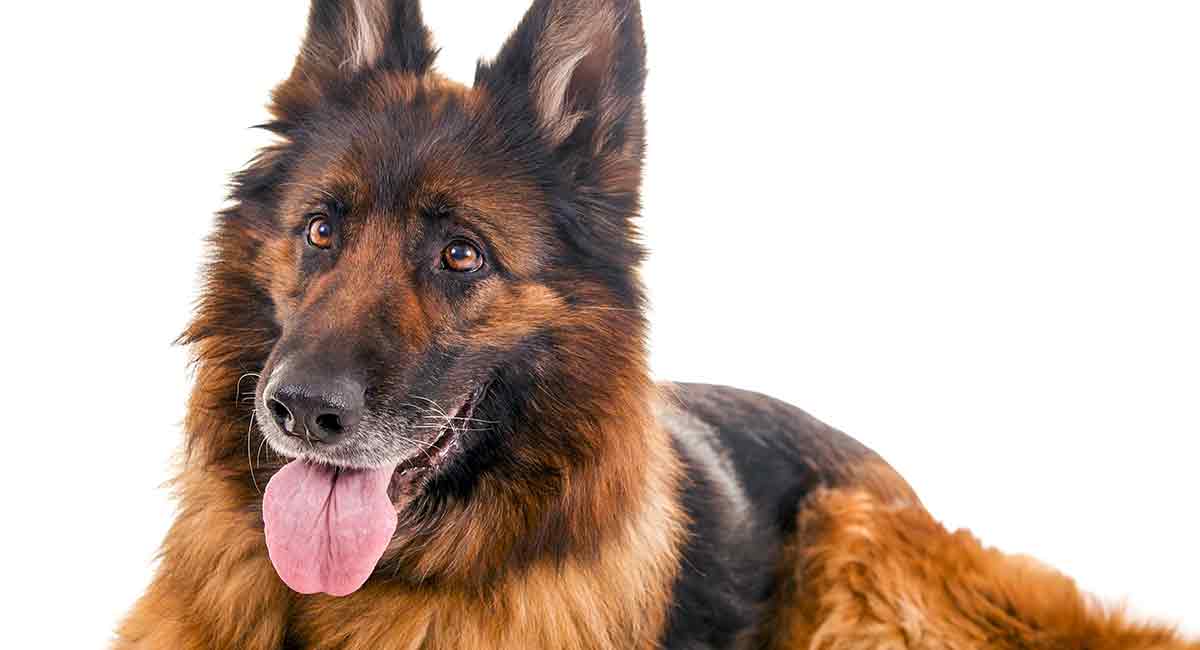 While no one wants to think about their pooch getting older, it is an inescapable part of life.

Someday, every dog will be considered elderly.

Most older dogs will develop a chronic condition eventually, and many will not be as active or playful as they once were.

But there are quite a few things you can do to ease your dog’s ascent into their golden years.

Keeping up with their exercise requirements, meeting their dietary needs, and staying on the lookout for health problems can make your dog’s last years enjoyable.

To help you keep your German Shepherd as healthy as possible as they age, we’ve collected all the information you might need to know into one place.

When is a German Shepherd officially elderly?

There is no exact age when a dog is considered “elderly.” It depends a lot on genetics, diet, exercise routine, and overall health.

Dogs who experience many health problems might act older than they are, while other dogs can still act like puppies far into their life.

Generally, these dogs are considered elderly around eight years of age, according to the UC Davis Book of Dogs. However, this can differ quite a bit from dog to dog.

To figure out whether or not your dog is considered elderly, we recommend taking age, appearance, and behavior into account.

How to tell if your dog is elderly

While greying of the hair and muzzle is a common way to tell if a dog is getting older, this observation couldn’t be further from the truth.

Much of the reason a dog’s hair starts to grey lies mostly in their genetics, and the German Shepherd is no different.

Your German Shepherd could be as young as three years old, or as old as 15 years old, when their coat begins to grey.

It is not an accurate representation of whether or not your canine is elderly.

However, there are other signs of telling whether or not your German Shepherd, or any dog for that matter, is elderly.

Good ways to tell are noticing that your German Shepherd isn’t as spry and energetic as they once were.

Preferring to walk at a mid-pace instead of a run or brisk walk, and lazing around the house instead of playing.

Stiffness and slowness to stand up or lay down is another common sign.

Hazing or clouding of the eyes may also indicate that your dog is becoming elderly.

Late-age disorders such as arthritis and dementia can also indicate that your pooch is reaching their golden years.

The onset of these diseases and disorders can take a toll on your dog and might make them show other signs of aging.

If your dog develops these disorders earlier in their lifespan, they might act elderly sooner than other dogs.

If you think your German Shepherd is becoming elderly, it may be wise to take them in for a routine check-up at the veterinarian’s clinic to ensure your pup isn’t developing any serious diseases common in elderly dogs.

Caring for an old German Shepherd

If you notice that your dog is beginning to act elderly, there are a few things you should start doing. After all, elderly dogs have different care needs than puppies or adults.

Firstly, you should be sure to take your dog to the vet for a checkup regularly.

Elderly dogs are more likely to develop disorders than those in the prime of their life.

But many of these disorders can be treated if caught early. For example, it is much easier to slow the progression of arthritis if you catch it early.

Your dog’s hips and elbows should be mainly looked after.

Arthritis is prevalent in the elderly German Shepherd. Some are even reported to lose the use of their hind legs altogether.

Secondly, if you aren’t already, you should begin taking care of your pet’s teeth.

Dental disease is widespread in elderly dogs and can have a negative impact on their health.

If your canine’s teeth begin bothering him, it is likely that he will stop eating.

This setback can have a massive impact on their health and cause them to become underweight.

Many dogs’ health begins spiraling downhill once they have dental problems.

Prevention is the best medicine in this case. Brushing your dog’s teeth daily and even using a breath spray formulated for plaque preventing can go a long way.

In some cases, professional cleanings might be necessary at your vet’s office.

However, this often requires anesthesia, which many elderly dogs do not react well to. Because of this, these cleanings are usually avoided as much as possible.

However, your veterinarian is the expert on your pet’s particular situation and can help you decide the best course of action.

While many senior dogs begin to slow down, it is vital to encourage them to get the exercise they need.

A brisk walk around the block will probably be enough for most German Shepherds.

If your dog has health problems, we recommend speaking to your vet about how it might affect their exercise needs.

Toys can be particularly useful for dogs who are reaching their senior years.

Often, dogs at this age need a little extra encouragement to exercise.

The right toys can work correctly in this aspect.

Since the German Shepherd is an intelligent dog, it can be useful to keep their brain active with puzzle toys.

These toys can maintain your dog’s brain health and encourage them to get up and moving.

Training and learning new things can also help in this aspect. It is never too late to teach an old dog new tricks.

As your dog begins to age, it will become essential to accommodate their needs.

Many older German Shepherds will have hip problems. So, ramps and dog stairs are particularly helpful.

An elevated food dish can also help a canine with joint problems.

You should pay particular attention to your dog’s bed.

A soft, supportive bed can help your pooch get comfortable and prevent them from experiencing achy joints.

If you have hardwood, you should think about investing in some carpets.

Many older dogs have difficulty walking on hardwood floors. Mats and towels can help them get their footing on these slippery surfaces.

Often, elderly dogs are less active than their younger counterparts. This means that they don’t need the same amount of calories.

Many elderly dogs can become overweight as they begin to slow down if their food is not changed.

Being overweight can put extra tension on their joints and lead to a variety of health problems.

On the other hand, however, some dogs do the exact opposite as they age and get skinnier.

They can begin to eat less than they need due to dental problems or other disorders.

Because this varies widely from dog to dog, we recommend speaking with your vet about your particular dog’s situation.

You should also ask your vet to teach you how to evaluate your dog’s weight from home.

This skill will allow you to pick up on health problems before they become dangerous.

If your dog already has dental problems, you might want to consider a senior dog food that is easy on the teeth.

As your dog ages, it is likely that he will experience a variety of health problems.

For many disorders, there are special diets that can prevent the disease from progressing and lessen symptoms.

It is likely that your dog will need to be switched over to one of these specialty diets eventually.

However, it is important to always speak with your vet beforehand to ensure that it is the right choice for your dog.

On top of changing your dog’s usual dog food, you might also want to consider adding some supplements to your dog’s diet.

Fatty acids such as DHA and EPA have been shown to decrease symptoms resulting from arthritis and other joint problems.

This supplement can be useful to a German Shepherd who is experiencing joint problems.

MSM, chondroitin sulphate, and glucosamine might also be useful for dogs who are experiencing joint pains.

If your dog is not eating a proper amount of food or is experiencing digestive issues, your veterinarian might recommend a multivitamin to help him get all the nutrients he needs.

However, in many cases, a multivitamin is not necessary.

Much like humans, dogs age differently depending on their diet, exercise, genetics, and even stress.

It is difficult to reliably gauge when a dog becomes elderly due to these factors.

However, the first and most common sign of aging is reduced activity levels and increased amounts of sleep typical for your dog’s breed.

This may be followed by lack of interest in going for walks and playing.

If you suspect that your German Shepherd is beginning to become elderly, it is advised that you take them to a veterinarian clinic for a routine check-up.

Unfortunately, a German Shepherd’s expected lifespan is between 9 and 13 years old, and their time left here is getting short.

It is common for German Shepherds to face arthritis, skin problems, decreased activity, dental issues, weight gain or loss, or even cancer at this age and older.

At this age, German Shepherds may see limping, difficulty eating or inability to keep food down, joint pain, hearing and vision loss, urinary issues like incontinence or difficulty in urination, among others.

As your German Shepherd gets older, their ability to use their hind legs diminishes rapidly, eventually leading to total loss of ability to move their rear legs.

This is commonly due to arthritis or hip dysplasia. Hip dysplasia is more likely to occur the older your dog gets.

Skin problems, such as cutaneous cysts are more likely as a German Shepherd ages.

In addition to these issues, all previous health concerns also become more likely or are already present.

Your German Shepherd has reached the upper limit of their expected lifespan.

Aging beyond this point is an accomplishment and testament to your dog’s strength.

However, their time is drawing ever nearer.

You should expect that your dog will not want to move or eat much. They are likely to have issues urinating or defecating.

It is also common for German Shepherds of this age to stop hearing or seeing.

Some people report their German Shepherds mutilating themselves by chewing their paws and nails apart at this age.

However, this is commonly caused by food allergies and can be prevented by changing their food up.

All previous problems associated with age are now more likely to occur.

Very little movement and eating are to be expected. Trouble going to the bathroom is also frequent.

Your dog may not be moving at all and eat very little food, if any.

Walking around is a struggle due to joint pain, eating is difficult from dental issues.

Even though your German Shepherd may be getting older, their time isn’t up yet.

You can make their aging process easier by changing up their diet to accommodate their needs and installing furniture so that they may be able to get around the house more comfortably.

Taking them in for check-ups may also be helpful, so you can identify and treat issues before they get too severe.

Keeping them active by going on walks and engaging in some light play will also help keep them limber.