You are here: Home / Puppy Search / Littermate Syndrome: Raising Two Puppies At Once 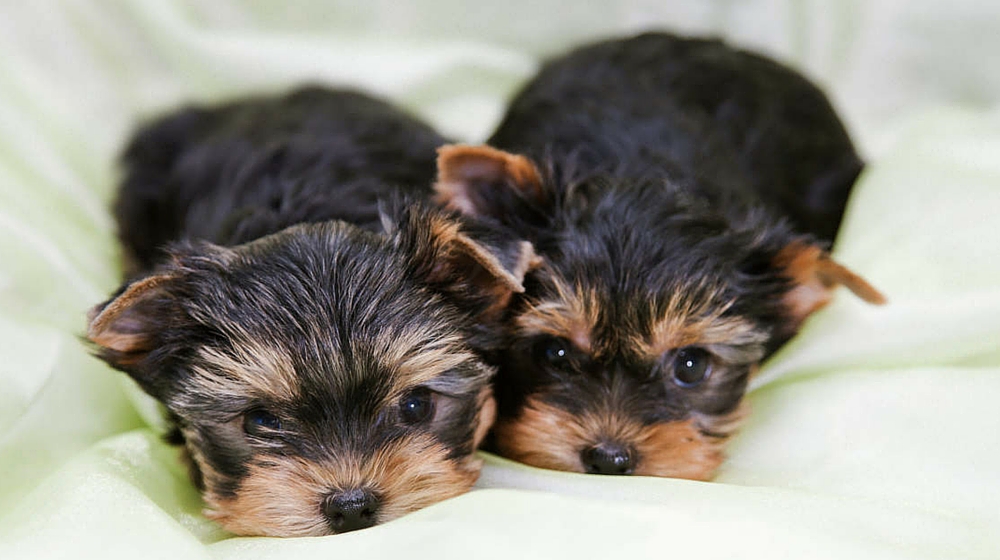 Are you worried your puppy will be lonely?

Has your breeder told you they have one more puppy left and would love you to take two? Or offered you a discount for buying two pups together?

Have you heard that littermate syndrome can be a problem for people raising two puppies at once?

Littermate syndrome is a group of problems that can arise when two puppies of similar age are raised together in the same household. It’s possible to avoid or minimize these problems with the right knowledge and equipment

But buying two puppies together is not a decision to be taken lightly, and you will need to think hard before making the commitment to a pair.

Twice the fun, can quickly turn into double-trouble.

The pros of getting two puppies together

A lot of people don’t plan on bringing home two puppies, but instead do so on the spur of the moment.

Either due to pressure from the breeder, or because they simply can’t bear to leave either one behind.

When you first get home with your two bundles of fur, this situation can make the early transition easier for them both.

They will often curl up together at night, and bounce around together during the day.

The worried cries that new puppy owners normally endure for the first few nights will probably never materialize in a household with a pair of puppies.

And later on, when you are out of the house, they will probably be less anxious about you leaving them alone.

The cons of getting two puppies 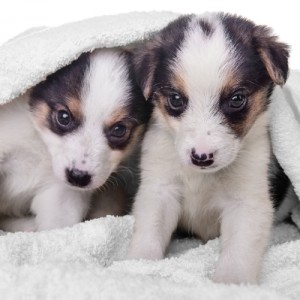 This is the very bond that gave you a couple of great nights sleep, when other new owners were coping with a brand new puppy’s night-time howls.

The downside of your puppy bonding strongly with his brother or sister, is the impact this can have on your relationship with your puppy, and with his training.

And while your dogs might be happier when left together, they won’t benefit from learning to spend time alone.

The ability to relax and sleep when left alone is something that all young puppies needs to learn from an early age – and this won’t happen unless you take the trouble to separate them regularly from the start.

To teach each puppy to cope on their own means sometimes taking one puppy out without the other. And sometimes leaving them in different rooms. And this means different crates.

This concept of separating littermates is important in other ways too. When training for example.

And means that the benefits of your puppies having company are not as great as you might initially have thought.

It’s best to crate littermates separately from the start. And two crates can take up a lot of space in your home. Especially as they grow.

But training is much more about basic manners and nice behavior as it is about winning prizes.

Even if you don’t want an obedience champion, you do want a dog who will walk nicely on the lead, come when you call him and have good manners in the home.

If you want a nice dog, you are going to have to train your puppy.  And you can’t train one puppy while another puppy is trying to play with them.

Nor can you easily train a puppy who is totally focused on their littermate or distraught when separated from them.

You want to have a great relationship with your dog. And to achieve this, you need to be at the center of his universe.

When you have two puppies this can be very challenging.

To succeed in training your two puppies effectively, you’ll need to train them individually. At least to begin with.

So you will need is lots of time on your hands, and the ability to separate your puppies for training purposes.

The early stages of dog training must be carried out alone. Just you and the puppy  one-to-one.

We can’t emphasize this too much.

Having a littermate watching, even from the other side of a gate, or yipping in another room, is very distracting for a young dog.

If you want your dog to be obedient in public, to walk nicely on a lead when passing other dogs, or to come away from other dogs when you call, you’ll need to teach these skills one-to-one.

So you’ll also need to separate your dogs to succeed on each of your trips outdoors.

When you plan your training trips, whether they are in the house, garden or in a secure training field, you will need more than double the amount of time taken by someone with one puppy.

Are you prepared to make a unique trip out for each puppy most days? That could be a lot of extra time out of your busy schedule

Most breeders do not recommend buying two puppies from the same litter.

They will in fact go as far as to say that any breeder who does recommend it, should be regarded at best with suspicion.

Unfortunately, a breeder who suggests you take two puppies is probably only doing so because they need the money, are worried about having to care for the other pup themselves, or because they are unaware of the problems it can cause the new owner.

This means that if you are offered two puppies together – it doesn’t reflect well on your breeder. It suggests that they are lacking in experience and knowledge, or irresponsible.  And for the best start in life, a puppy deserves a caring, responsible breeder

More than twice the trouble

If your family life is hectic, or you are short on free time, then it might be worth considering waiting to get a second puppy until the first is a year old.

Puppies are very hard work when they are young, and having two at once will be more than twice as tricky logistically.

If you have a nice age gap between them, you will find that you form a great bond with them both rather than battling for their attention.

If you have plenty of time to devote to your puppies and are still feeling confident having read the above, then there is just one more thing you should consider before you go ahead.

Some of the problems described above are included under the heading of littermate syndrome. Which refers to the problems caused by the relationship between two puppies that become overly dependent on one another.

Some littermates become very distressed at being apart even for short periods of time.

They can also show fearful reactions to unfamiliar people, dogs or situations. This is believed to be due to their fixation on each other, preventing them from becoming properly socialized to anyone or anything else.

In some cases one littermate will bully the other and you can end up with one very subservient and anxious puppy and another that is more confident and outgoing. With both of them showing less interest in their human companions

Littermate syndrome,  is widely believed to be very common. Though with experience and effort it is possible to avoid most of the problems associated with it.

The key to succeeding with littermates lies in separation.  At least on a daily or almost daily basis.

This way the two puppies get used to being apart, and to spending time alone. It ensures that you can train each puppy effectively and build a bond with your two dogs.   It also helps to ensure that your two dogs will be able to cope when older if they ever have to be separated because one is ill or injured.

Separating littermates regularly is not only challenging, it may reduce the benefits and pleasures that you probably anticipate from getting two puppies together.

If you are considering getting two puppies, have plenty of space in your home, and time on your hands, then you may well make a great success of raising littermates together.

You’ll need to separate your puppies early and often and train them separately to avoid the problems associated with littermate syndrome.

It will help if you take notes on where your training progresses to each time you carry it out, as it can be hard to remember with just one dog what you have been doing and you don’t want to get in a muddle and set your expectations too high if one is taking a little longer to catch on than the other.

For a relatively inexperienced as a dog owner, it makes good sense to avoid the risks of littermate syndrome, and the extra time and commitment needed to train litter mates successfully.

The inconvenience and potential fallout probably outweigh any advantages in the two puppies growing up together.

Bear in mind also, that reputable breeders are most unlikely to allow two puppies to go to the same home, and there is something of a question mark over any breeder that would agree to this.

There are plenty of success stories, from people who have carefully planned out having two puppies. And you can find support and help on the forum if you decide to go ahead

The decision to get two puppies is one that only you can make.

Just make sure that you have carefully considered the potential pitfalls in advance, and made firm plans for how to pre-empt and deal with them when they occur.