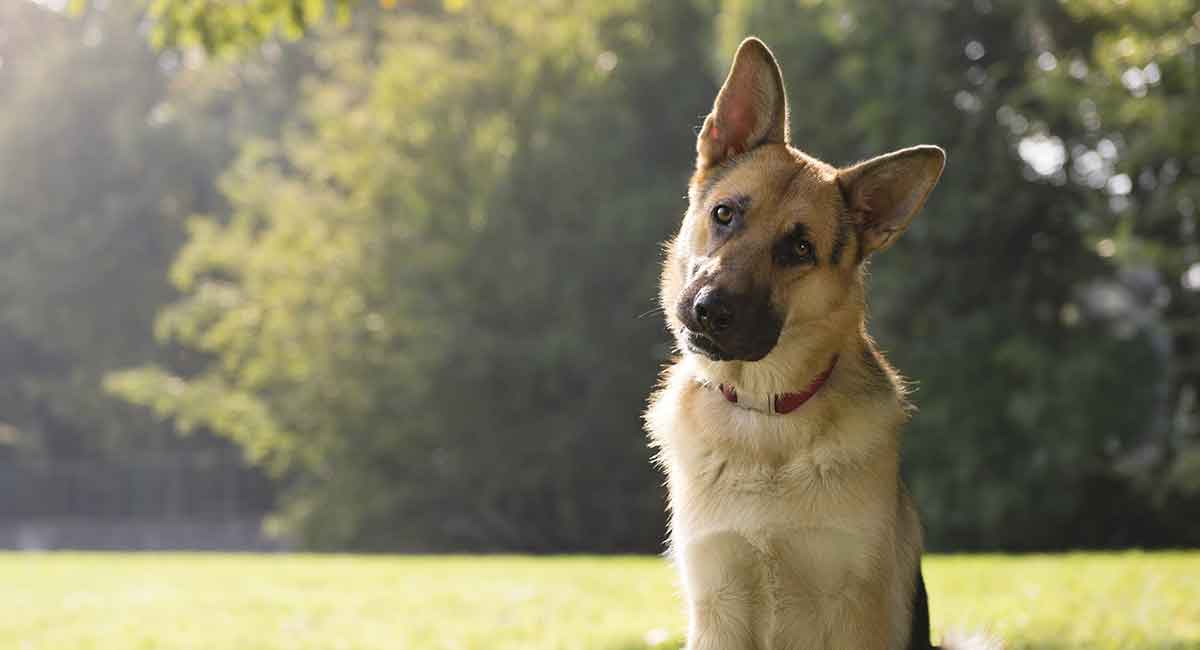 And female German Shepherd size is typically within 22-24 inches tall and 50-70lb.

One of the things everyone loves about these dogs is their unique German Shepherd size. These are medium-sized to big dogs, and they wear it well!

If you’re looking for information on the size of German Shepherd puppies, their growth, adult size, and other concerns, you’ve come to the right place!

Let’s take a look at everything you need to know about German Shepherd size.

Did you know that the American Kennel Club lists German Shepherds as the second most popular dog in the U.S., behind Labrador Retrievers?

They were bred for that purpose in the 1800s by a German cavalry officer named Captain Max von Stephanitz. He took different herder strains from different parts of Germany to create the perfect one.

Stephanitz and others founded the world’s first club for GSDs. He also turned to refining them into good police and guard dogs, creating a very versatile breed still in demand as herding became less common.

The dogs became popular in the U.S. after Rin-Tin-Tin and Strongheart appeared in movies and after the world wars introduced dogs working for the German military to people of other countries.

However, the breed suffered from anti-German sentiment after the world wars. In World War I-era Britain, some owners called their GSDs Alsatians, and some British owners still prefer that name.

German Shepherds are often used for service, agility, conformation, obedience, search and rescue, police/military, and guarding. They are easily trained, so they make good show and work dogs.

German Shepherds are generally healthy dogs, as they were bred to work before they were bred for beauty. Yet like all dogs, they can get inherited illnesses.

This is definitely true of German Shepherds, who can all trace their lineage back to one individual. Despite a bottleneck at one time, however, researchers have found only a moderate loss of genetic diversity within the breed.

These dogs are prone to hip and elbow dysplasia, osteochondritis dissecans, disorders of the pancreas, panosteitis causing lameness, eye and ear issues, and allergies. They are also vulnerable to bloat.

Also, some show strains are increasingly being bred to have a “banana” back shape that may potentially hurt German Shepherd health. Some dogs have deeply sloping backs and angulation in the legs that may be causing conformation issues.

German Shepherds can live for 9+ years, but of course, lifespan is a result of a number of factors, including genetics, environment, and diet.

How Big Are German Shepherd Puppies?

There are usually 6-8 puppies in a litter, and birth weight, as well as litter size, often depends on the mother’s size as well as body shape.

By about a week of age, they will weigh 1.6-2.1 lbs, which is about double their birth weight.

Don’t be surprised if their individual sizes begin to show at this point; some small pups may overtake the larger ones even though they can’t see or hear yet!

As a large breed, German Shepherds should not be overfed. Too-rapid weight gain in large breed dogs has been linked to higher levels of canine hip and elbow dysplasia, along with osteoarthritis.

Joint disorders may be caused by an excess of calcium, phosphorus, and vitamin D. It’s easy to overestimate how much food a puppy needs because the correct amount of food can look small, so be careful.

This is one of the reasons why large breed-specific dog foods exist: to control the growth of these dogs in a way that will maximize their health and minimize joint problems.

So make sure to consult a vet about your puppy’s correct level of weight gain, and follow a growth chart provided by your breeder or veterinarian.

At about a month, German Shepherd puppies will weigh 4.5-9 lbs.; females weigh less, and males will be at the top of the range.

When they reach three months, your pup should be about 17.5-31 lbs. depending on gender.

At four months, your German Shepherd puppy will weight somewhere between 28.5-39.5 lbs. That’s pretty big! It’s about half of the adult weight your dog will eventually reach.

Large growth spurts will take place between 2-5 months, so keep a close eye on your puppy’s weight during this period especially.

German Shepherd puppies generally stop growing significantly in height by nine months for males, eight months for females; males may get an extra inch by 15 months and females slightly less than that by 12-15 months. They reach their adult weight at 36 months.

German Shepherds, like many larger breeds, are considered fully grown by about 18 months, when they have reached 98 percent of their growth.

What Is The Average Adult German Shepherd Size?

German Shepherd dogs will no longer grow in height after 36 months of age, or three years.

You should know there’s about a 25 percent weight difference between males and females.

Just remember that the numbers we’ve given in this article are averages. Your dog may be under or over, and it’s fine if that’s the case!

You can ask your vet for a weigh in and a check up to discuss any concerns.

For females, a size of 22-24 inches at the withers is about right.

These dogs are longer than they are tall. The breed standard says the desired proportion for German Shepherd dogs’ width to height is about 10: 8.5.

There’s no weight standard listed for the breed. However, you can expect your male GSD to weight about 80 lbs by 18 months of age, and 84 lbs by 36 months of age.

For female GSDs, the average weight at 18 months of age is about 62 lbs. At the age of 36 months, she’ll probably weigh around 66 lbs.

German Shepherds – The Right Size For You?

Your tiny, cute German Shepherd puppy will likely grow into a medium-sized or large dog. Females will probably weigh in on the medium side, while males can get pretty big.

GSD puppies experience a phenomenal rate of growth, especially before six months, so be ready. Just remember that dogs as big as male German Shepherds are at risk for joint problems because they grow so quickly, and overfeeding them can exacerbate those problems as they get older.

Eventually, German Shepherds will reach the 22-26 inch range in height, and will be between 50-90 lbs. when fully grown. Can you handle that?

Do you love the size of German Shepherds? Just make sure you understand how to best take care of them and keep them healthy as they grow!

Make sure to click here for even more German Shepherd facts!

Mercola Pets (2013). The Mistake That Can Wreak Havoc on Your Pet’s Skeleton.