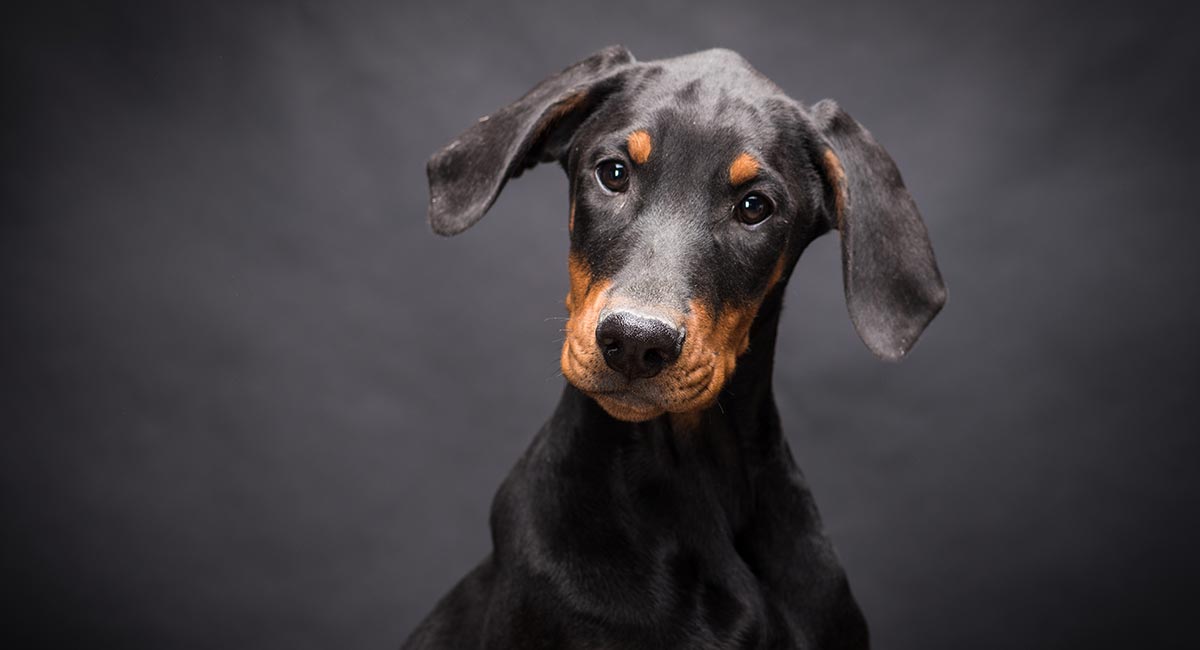 The Doberman Pinscher is by no means a new breed. Regal and proud, this breed stands at 24inches to 28 inches and weighs between 60lbs and 100lbs. These dogs are alert and obedient. Perhaps the Doberman dog is most famously known as a guard dog and military breed but can make an excellent family dog too.

Our readers’ most popular and frequently asked questions about this breed.

History and original purpose of the Doberman Pinscher

This breed originally hailed from Germany sometime in the 1890’s, where they were first developed by a man named Karl Friedrich Louis Doberman.

He was a tax collector in Apolda, which was apparently considered some pretty dangerous work back in the day! Since his work was putting him in some rather precarious neighborhoods, Karl sought protection in the form of a guard dog.

The mission inspired him to create a new breed of dog that he considered to be a mixture of strength, loyalty, intelligence, and ferocity!

As the years passed, the breed was transformed into the modern-day Doberman Pinscher we know today.

Characteristically, this is a medium to large-sized dog renowned for their intelligence, loyalty, and obedience.

The breed’s reputation was not always so ferocious. In fact, according to Karen Delise’s book, The Pit Bull Placebo, Doberman Pinschers were celebrated in the early 1930’s and 1940’s for their bravery and loyalty.

Stories can be found of Dobies rescuing young children and protecting their owners! In fact, one famous Doberman Pinscher was even recognized by the Humane Society for rescuing its three-year-old charge from a rattlesnake!

Because of this, Doberman Pinschers were hailed not only wonderful guard dogs but as honorable family dogs with an excellent reputation around children.

It’s thought that the breed’s reputation was not seen as vicious or unpredictable until World War ll. At this time, depictions of these dogs standing alongside Nazis began infiltrating national news outlets.

However, it didn’t seem to matter that these dogs played a huge role in the US Marine Corps. Their reputation quickly became that of a vicious, unpredictable dog.

As a result, the Dobie has struggled to recover from its ‘devil dog’ reputation.

Yet the Doberman still manages to make it to number 15 on the American Kennel Club (AKC) registry for America’s most popular dog breeds!

Today, the breed is regarded as proud and intelligent. With proper training and socialization, they can make a wonderful family pet, service animal, or military dog.

The Doberman Pinscher is a medium to large dog with a regal appearance and watchful gaze.

They have a slim and graceful build. 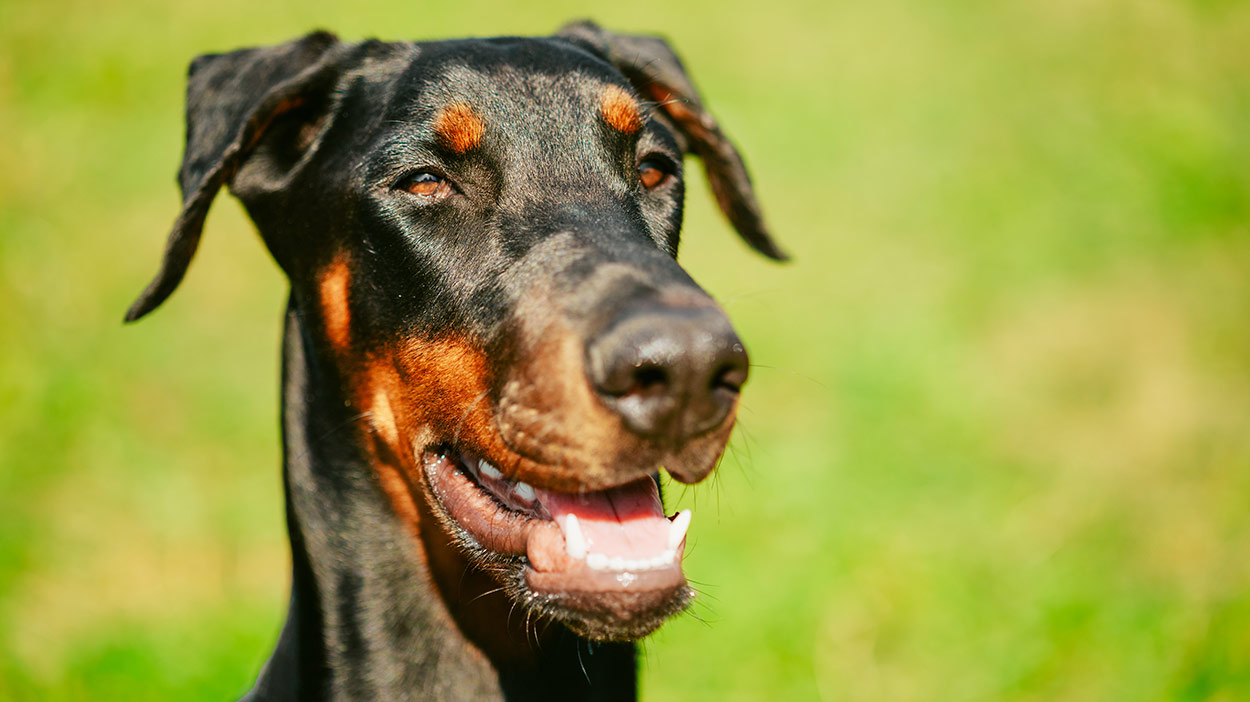 The Doberman Pinscher has a sleek, short coat that comes in nine standard colors including:

The Doberman Pinscher is athletically built and stands tall and powerful with an alert, intelligent expression. They have a shiny coat and naturally floppy ears.

The Doberman Pinscher was routinely depicted throughout history with cropped ears but this has quickly become an outdated practice.

For this reason, we support leaving your Doberman’s ears in their natural state

After World War ll, the Doberman Pinscher struggled to rebuild his reputation as a decent pet who displays great intelligence and loyalty!

Although Dobermans are now known to exercise restraint and excel in obedience, they were originally bred as a guard dog.

For this reason, they are fearless and protective dogs created to look and behave in an intimidating way if necessary.

These traits do not always translate well as a companion dog. But thankfully, modern-day breeders have worked hard to tone down these qualities.

Training and exercising your Doberman Pinscher

In fact, the modern version of this breed is considered by many to be mild-mannered, trainable, and very friendly.

A prospective owner should still implement proper training and early socialization with their Dobie. This will ensure your Doberman will be well adapted to their new environment.

It’s also a good idea to supervise your Dobie around small children and strangers. After all, this breed still retains the guard dog instincts they were originally bred to have.

Luckily, the Pinscher is known to be incredibly intelligent and obedient, therefore, prospective owners can expect their dog to be easy and fun to train!

Because they are such brainy dogs, Dobies enjoy mental stimulation and challenges in addition to physical ones.

For this reason, it’s best to regularly provide tasks for them to complete. Also, you can teach your Dobie some tricks to keep them mentally sound.

It’s important to start training as early as possible, as untrained Dobies can become pushy and even destructive. You can read our training guides here.

As always, be sure to keep obedience training fun and positive! This will ensure an enjoyable experience for both you and your pooch.

Keep in mind this is an energetic dog with an athlete’s stamina. They are large in size and require an adequate amount of exercise to keep them happy and healthy!

The best forms of exercise include long walks, runs, and lots of free play.

With proper training and early socialization, and of course supervision around small children, the Doberman Pinscher can make an excellent companion and family dog!

As with all purebred dogs, the Dobie is predisposed to a number generational health issues.

Keep in mind that not all health issues are genetic. In fact, other factors such as environment, diet, and exercise will also play a big role in your dog’s health.

Still, it’s always best to extensively research any health issues in your dog’s bloodline. This will help to ensure you are prepared for any issues in the future.

This breed can be prone to a number of genetic health issues including:

Keeping the above in mind, an early health screening of your dog can help avoid or prepare for future health issues.

Remember that reputable breeders will be able to provide certificates regarding the health of the parent breeds, therefore proving they have been screened and cleared of certain health issues.

You can learn more about specific health testing requirements from the American Kennel Club (AKC).

A healthy Dobie will live an average of 10 to 13 years.

Although these dogs have a short, sleek coat, they do shed regularly. This means they will require some brushing to manage loose hair and keep their coat healthy.

Otherwise, this is a relatively easy dog to care for requiring only occasional bathing.

A prospective owner of this breed should also make it a habit of cleaning their ears regularly to keep wax and moisture at bay.

You Pinscher will need their nails trimmed weekly to avoid splitting and cracking.

Because this breed is so athletic and intelligent, they do best in homes with a large fenced yard where they are free to roam and play.

With proper training, they are loving and loyal pets. However, this breed needs an owner who is able to offer adequate obedience training.

An added plus for instance would be if you’re someone who enjoys an active lifestyle. In that case you can share your lifestyle with your dog. 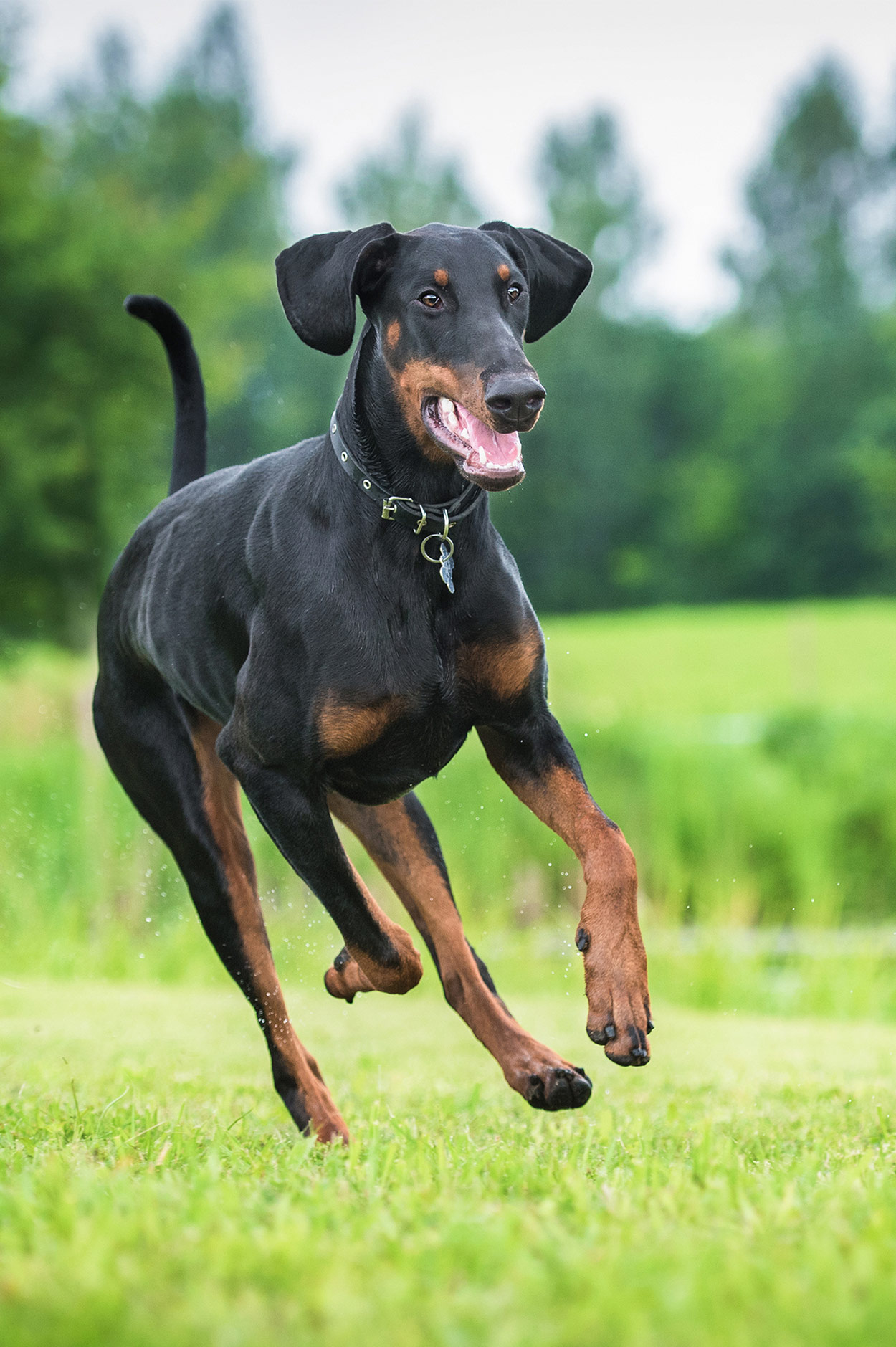 The Dobie is excellent around children provided they are properly trained, but supervision is still recommended, particularly around younger children.

These dogs shed. As a result, allergy sufferers should take caution.

Shelters can also carry all types of breeds and crossbreeds. However, finding a Pinscher at a certain shelter can be hit or miss.

Although most shelters incur fees, they are often a fraction of the costs that breeders charge. You should prepare for adoption fees to be anywhere from $50 to $100.

Most shelters will cover initial veterinary fees to ensure your dog is suitable for adoption and ready for their forever home! If you do choose to adopt from a shelter, be sure to ask about temperamental issues and any known health problems.

Keep in mind that much of the history of your Dobie may be a mystery, so be wary of introducing them to strangers and children. That is until you’re sure they’ve been adequately trained and socialized.

You can jump to a list of breed specific rescue centers here.

Buying your Dobie from a reputable breeder is of utmost importance. We recommend doing plenty of research before you decide where you get your puppy.

Be ready to spend anywhere from $500 to over $1,000. The cost will depend on both the breeder and the history of your dog’s parents.

Again, always do your research and make sure you look into the history of your Pinscher puppy’s parents. It’s also important to ask about temperamental issues with your dog’s parents and previous litters, as well as any health concerns that have arisen in the past.

In addition, reputable breeders will be able to provide health certificates to prove their dogs have been adequately screened.

If you’re still unsure about where to find your Pinscher puppy, you could always attend a local dog show. Networking at events like these can often point you in the right direction. Alternatively you might want to consider a Doberman dog mix. Mixes are increasingly popular.

You can find more information in our Puppy Search Guide.

Caring for a vulnerable Pinscher puppy is a big responsibility. However, there’s no need to worry! There are some great guides to help you with all aspects of puppy care and training.

You’ll find them listed on our puppy training page.

Lucky for you, we have an entire article dedicated to mixes with this breed! Mixes are becoming more and more popular for a number of reasons.

One of which is the idea of hybrid vigour. This is the idea that a dog will have healthier genes if he has a mix of both his parents’ genes.

You can check out our article on mixes with this breed here.

Comparing the Doberman Pinscher with other breeds

Pros And Cons of Getting A Doberman Pinscher

These dogs have a reputation for being ferocious and dangerous. These are big, energetic dog, therefore they need lots of space for exercise. In conclusion they may not be suitable for small houses or families with small children.

Pros:
This is a highly intelligent breed. In addition, they are loyal and bundles of fun with the right socialization.

Do you know of any other great rescue centers for this breed? Let us know in the comments and we’ll add them to the list.