You are here: Home / Breeds / Pure / The Giant Schnauzer: Your Guide to a Beautiful, Big and Brainy Breed 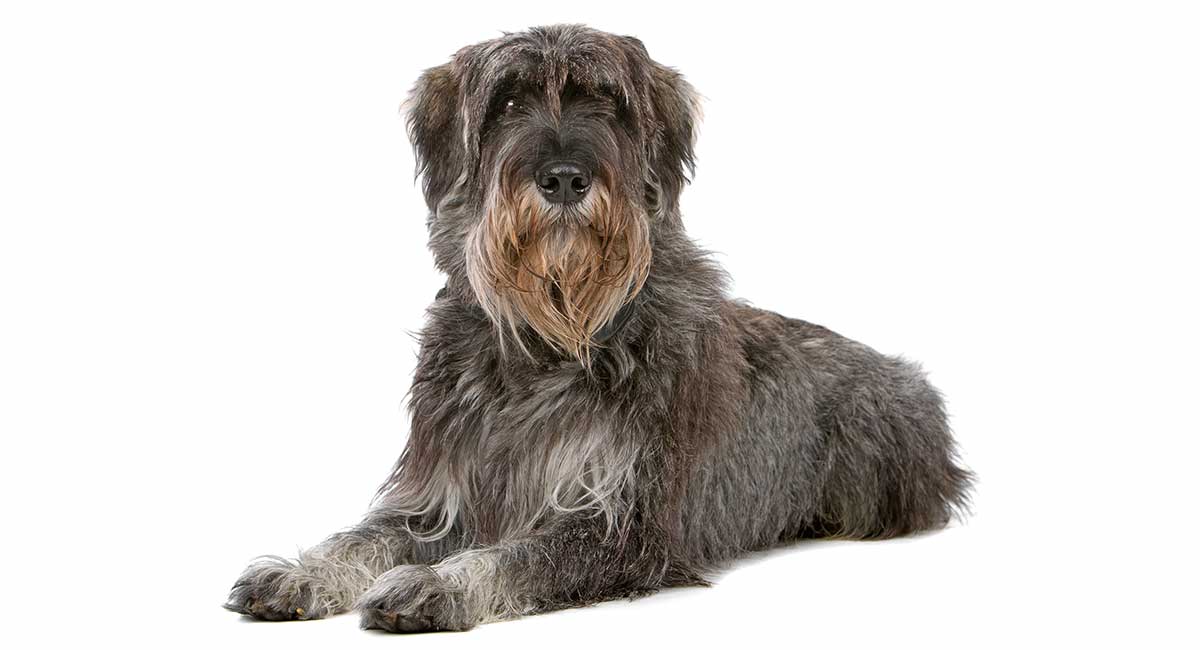 If you have found yourself infatuated with the giant schnauzer dog and are wondering if he would make the perfect fit for your home and lifestyle, then this is the article for you.

Anyone who has ever seen pictures of giant schnauzers knows that this powerful and impressive breed is the largest version of one of America’s favorite dog breeds, the schnauzer.

And packed with all that size is intelligence and loyalty as well as brains and brawn, so it’s no wonder people are curious about him.

Welcome to the World of the Giant Schnauzer

The giant schnauzer’s name alone should let us in on the fact that this is a giant dog breed.

Being the largest of the schnauzer dogs, the giant schnauzer stuffs beauty, brains and brawn into a walloping package suitable for working in the military and with police.

But although this powerful guard dog is known for his sheer size, loyalty and intelligence, he is not the dog for the novice dog owner or casual animal lover.

Where Does the Giant Schnauzer Come From?

Believed to be a descendant of the German pinscher and once considered a rough-haired version of the breed, the giant schnauzer was built to work.

Experts believe there could also be other breeds who possibly make up the giant schnauzer of today, including the Great Dane, German shepherd, rottweiler, Doberman, boxer, Bouvier des Flandres and Thuringian shepherd.

A farm dog of sorts, the giant schnauzer hails from Germany, where his size was utilized to guard property and herd livestock.

However, it wasn’t long before the giant schnauzer’s watchdog skills took him from guarding the farm to guarding factories and other businesses such as breweries, stockyards and butcheries.

Still relatively unknown outside of Bavaria, the giant schnauzer gained fame after being used as a military dog during World War 1 and again in World War ll.

And then, by the 1930s, the giant schnauzers had found his way to America.

However, despite his breathtaking looks and imposing size, it was another 30 years before the giant schnauzer gained traction in the United States and became somewhat popular.

In 1962, it is said there were only 23 giant schnauzers registered with the American Kennel Club.

However, by 1974, that number began to skyrocket.

Today, the giant schnauzer is still a well-known police and military dog, but he also makes a great companion dog for the experienced dog owner, loved for his loyalty and intelligence.

Currently, the giant schnauzer ranks in at number 80 out of 190 on the American Kennel Club’s list of America’s most popular dog breeds.

So, if he is so well-known for being a guard dog, what is the giant schnauzer temperament? Let’s find out.

Search “giant schnauzer protection dog” and you’ll see how this magnificent breed got his name.

He is massive, commanding, and to the novice dog lover, a bit intimidating.

A giant schnauzer guard dog is common throughout the world, often used by police and military, and it’s easy to see why.

This is a breed that bonds closely with his owners and is fiercely protective of them by nature.

Bred to be territorial, this dog does best with those who know how to properly train and handle a large, protective breed.

While his loyalty and intelligence make him a joy to work with, he also requires socialization early on in his life and will need obedience training throughout his years.

The giant schnauzer does best with doggy jobs and will not tolerate being left alone or outside in the backyard to his own devices.

This is a breed who requires people time and companionship, and he must be with his family often to stay happy and feel fulfilled.

However, being a more dominant dog, the giant schnauzer is not recommended for children under 12 years of age and may not do well with strange dogs he has not met before.

Male giant schnauzers especially are more territorial around the same sex, so this is not a breed you would want to take with you and let roam free in the dog park unless he has been extensively socialized and well-trained.

And again, because of his naturally protective personality, the giant schnauzer requires extensive early socialization in puppyhood and then throughout his life.

He will also benefit from obedience training, and luckily, the giant schnauzer is incredibly intelligent and very trainable.

Physical Traits of the Giant Schnauzer

Considering his name, it comes as no surprise that the giant schnauzer size is, well, giant.

A giant schnauzer weight can range from 50 to 110 pounds.

However, the average female giant schnauzer weighs 55 to 75 pounds while a male typically weighs around 60 to 85 pounds.

The giant schnauzer’s double coat is one of his most beautiful features, being thick, weather-resistant and a bit wavy.

Naturally, the giant schnauzer has floppy ears that are often clipped to be pointed and erect, and a short, docked tail.

His dense coat can come in two standard color types, including:

So, how do you groom and care for a giant schnauzer? Let’s find out.

Despite being a massive dog, giant schnauzer shedding is not something a prospective owner who suffers from allergies should worry about because he does not lose his hair often.

While some sources will claim that “giant schnauzer hypoallergenic” go hand-in-hand, the truth is that there is no such thing as a hypoallergenic dog.

However, the giant schnauzer, much like the poodle and Yorkshire terrier, produces less dander in their fur and therefore induces fewer allergy symptoms to their human counterparts.

Due to his thick and weather-resistant coat, the giant schnauzer will require weekly brushing to reduce matting and knots.

He will also need to be trimmed or clipped on a regular basis to keep his coat healthy and looking its best.

Many owners spend a lot of time grooming their giant schnauzers, while others opt to take them to a professional groomer.

The choice is entirely up to you.

And like all dogs, the giant schnauzer will need his nails trimmed regularly to avoid cracking and splitting, and his ears cleaned to keep moisture and waxy buildup from causing ear infections.

How Do I Exercise and Train My Giant Schnauzer?

The giant schnauzer is an incredibly active breed that requires near constant companionship.

While he needs plenty of socialization and obedience training, he also may need another large dog to grow up with if you are unable to be around him all the time.

Another dog will come in handy when exercising your giant schnauzer because he will require lots of playtime in the yard, long walks, jogs, or hikes each and every day, and fun doggy games such as fetch and Frisbee to keep him occupied.

Wonderfully, the giant schnauzer is incredibly smart and loyal, and he is eager to please his family, making training him a breeze.

Still, and as previously mentioned, he requires tons of socialization and obedience training.

While we recommend this training for all dogs, it is especially important for a territorial dog with such strong guarding instincts as the giant schnauzer.

The giant schnauzer lifespan is quite long for a dog of such a large size.

In fact, a healthy giant schnauzer can live on average between 12 and 15 years.

However, the giant schnauzer does have some inheritable health conditions to be aware of, including hip dysplasia, osteochondritis dissecans, hypothyroidism and gastric torsion.

Early health screening can help you to prepare for or even prevent certain genetic health concerns your giant schnauzer may be predisposed to.

Are There Any Special Dietary Needs of the Giant Schnauzer?

Since the giant schnauzer is such large dog, he will do best on a high-quality dog food that is appropriate for larger breeds, as well as for his age, weight and energy level.

Because this breed is so active, he may require a higher calorie intake than many other breeds.

And of course, your giant schnauzer will need plenty of access to fresh water every day.

Dog treats can be given when necessary, especially during training.

While the giant schnauzer is a gorgeous, loyal dog who is full of intelligence and energy, he may not be the perfect pet for everyone, especially the novice dog owner.

Even experienced dog owners could find their hands full with this breed because he requires lots of attention, training, socialization and companionship.

Also, keep in mind that if you have younger children under the age of 12, this is not the right dog for you.

The giant schnauzer may feel that his primary job is to protect you and keep you safe.

Is a Giant Schnauzer the Right Dog for Me?

You should also consider your home type and living style.

Do you have a home with a large fenced-in yard where your giant schnauzer can run and play?

Are you around often enough to keep him company?

If not, are you willing to get another large dog to raise with your giant schnauzer, so he does not become bored and depressed?

These are all important things to consider when considering adding a giant schnauzer to your life.

However, if you live an active lifestyle, are single or have older children, are able to be home often and provide the necessary training and socialization the giant schnauzer requires, then he just may be the right dog for you.

When picking your breeder, be sure to do plenty of research and ask lots of questions.

Keep in mind that reputable breeders should be able to provide health certificates proving their litters have been screened for certain generational health issues.

Also, be prepared to spend a pretty penny.

Giant schnauzer breeders can run you anywhere from $500 to over $1000, depending on if your giant schnauzer puppy’s parents are show quality or not.

However, if you are looking to get a giant schnauzer for adoption from a shelter or rescue, one of the benefits is going to be the price.

Rescues and shelters are going to be much less than what giant schnauzer breeders charge.

Still, there are adoption fees, which typically run from about $50 to $100.

However, shelters will usually cover the initial vet fees, which allow you to know you are bringing home a dog who is up to date on all his vaccines and is otherwise healthy overall.