You are here: Home / Breeds / Pure / White Chihuahua – All You Need To Know About This Unique Coat Color 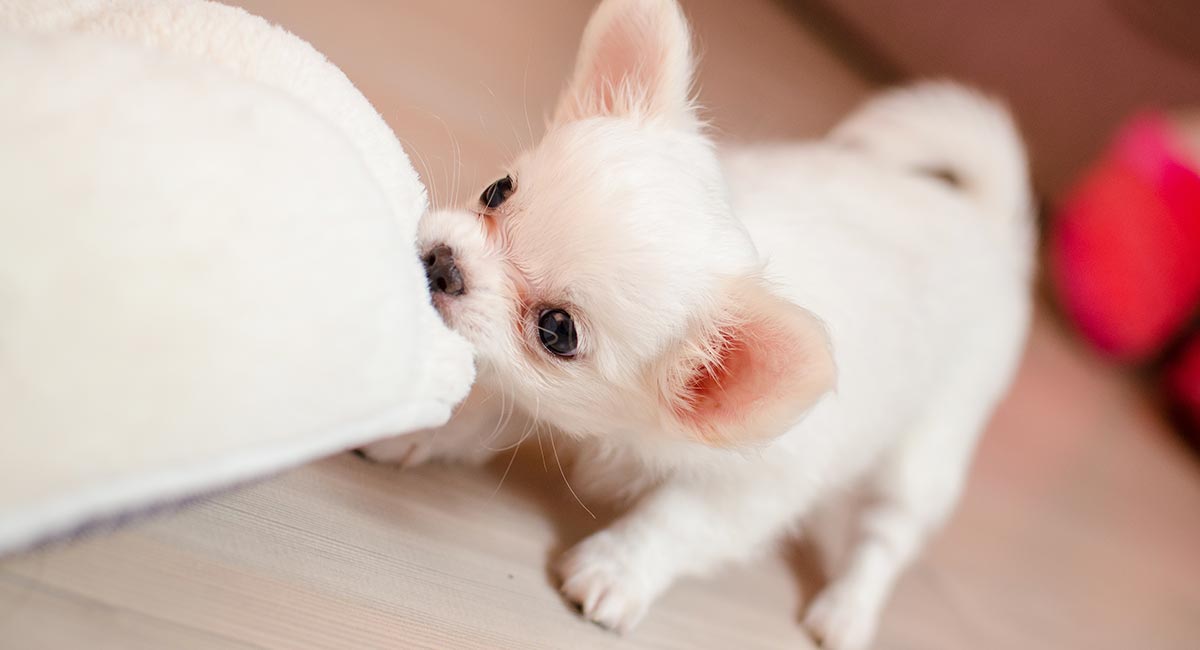 If you are wondering who the world’s smallest dog is, we would like to introduce you to the Chihuahua – but not just any old Chihuahua: the white Chihuahua.

Small but mighty, this feisty breed is known for:

Chihuahuas come in a few shapes and sizes, but this article is all about the brightest and whitest of them all.

Join us as we learn all about the white Chihuahua!

Is There Such a Thing As a White Chihuahua?

According to the American Kennel Club, the Chihuahua can come in at least 29 color combinations.

The colors range from white to black to many in between!

The most common colors on the Chihuahua color spectrum are black, white, fawn, chocolate, cream, and gold.

Chihuahuas can also be a mix of these colors.

So how likely are you to come across a white Chihuahua?

Keep reading to find out!

How Did the White Chihuahua Come to Be?

Although the Chihuahua is famous for being the national dog of Mexico, a number of ancient artifacts depict a dog similar to the Chihuahua existing worldwide.

So where does he truly come from and how did he get to Mexico?

What historians do know is that the Chihuahua has ties to the Aztec civilization.

The Aztecs are credited with breeding the dog down to his tiny, petite size that we know and love today.

After the conquest of Cortez, it was feared that the Chihuahua breed was lost.

However, the resilient little pooch managed to survive by taking refuge in small villages.

The breed was later discovered by traveling Americans.

As breeding standards were created and the Chihuahua was accepted by certain breed clubs, certain aspects like physical build and coat color were refined by breeders.

Today, all of the distinguishing qualities in your Chihuahua are going to depend on genetics.

Breeding a true white chihuahua can take generations to perfect.

The white gene is recessive, and the black gene is dominant.

You can learn more about genetics and coat color in dogs in this article written by Lynn Buzhardt, a veterinarian with the VCA.

To have a truly all white Chihuahua means that his nose and claws will be lighter in color.

A white Chihuahua will have no black pigment to his skin.

Merle is a light cream color that is often confused for white.

It is not truly white and is not accepted by most major Chihuahua organizations as being part of the breed’s color standard.

Grooming any color of Chihuahua is going to depend on his fur type.

This is because Chihuahuas can come in both long and short hair varieties.

Regardless of hair length, Chihuahuas do shed mildly.

They need regular baths with high-quality dog shampoo that helps to promote a healthy pH balance and won’t dry out their skin and fur.

If you have a short or smooth haired Chihuahua, you will want to give him an occasional brush as well.

A long-haired Chihuahua will need to be brushed once a week to keep mats and tangles at bay.

While there are a number of products online that boast tear-stain removal and brighter, whiter coats, we encourage you to do your research.

Your Chihuahua will also need his nails trimmed regularly and his ears checked and cleaned to keep them free of debris and excess moisture build up.

How Big Does a White Chihuahua Get?

Chihuahuas can come in a few different sizes.

White female Chihuahua dogs can be smaller, growing to be only five inches in height.

But what about a white teacup Chihuahua or a white toy Chihuahua?

Breeders who use the terms “teacup,” “toy,” or “micro” are selling a made-up term that is not recognized by major breed clubs and Chihuahua organizations.

Did you know that there are two unofficial types of Chihuahua dogs?

One is called the Apple Head Chihuahua, which is the type recognized by the American Kennel Club for show.

The other is the Deer Head Chihuahua.

The Apple Head Chihuahua has a harsh angle from his muzzle to his forehead, with bulging eyes and large ears.

We will talk about that further down.

The Deer Head Chihuahua, on the other hand, looks like a baby deer.

They have large eyes, a rounded forehead, and oversized ears.

As we mentioned above, the American Kennel Club lists up to 29 possible colors for the Chihuahua as well as 11 color combinations.

One of the most popular is the brown and white Chihuahua.

It is followed closely by the tan chihuahua.

That color was made famous by Hollywood movies like Beverly Hills Chihuahua and companies like Taco Bell!

The Chihuahua is small, as we discussed.

If he is a short or smooth coated Chihuahua, his fur will lay flat to his body.

A long-haired Chihuahua has long, often wispy hair that can sometimes have a curl or wave, so it’s possible to get a white fluffy Chihuahua.

Chihuahuas also have a long tail and large ears and eyes.

Average Lifespan and Health Concerns for a White Chihuahua

Chihuahuas are overall healthy dogs, and the same goes for a white Chihuahua.

For the most part, the average lifespan of a white Chihuahua is between 14 and 16 years.

All dogs can suffer from genetic health issues, and the Chihuahua is no exception.

However, white Chihuahua dogs can be more prone to congenital deafness.

According to Dr. George M. Strain, deafness in white dogs has been linked to the pigmentation pattern.

The greater the number of white hairs a dog has in his coat, the more likely he is to be deaf.

The merle gene in particular has been linked to congenital deafness in dogs.

While merle is not necessarily accepted by the breed standard when it comes to Chihuahuas, it is still not an uncommon color in the breed.

This is just one of the many reasons that responsible breeding practices are so important.

Along with deafness, a white Chihuahua can be prone to suffering from a number of other health conditions that affect small breeds, including:

That is a breathing condition caused by the development of the Chihuahua’s skull.

What Is the Temperament of a White Chihuahua?

Chihuahuas are, by nature, big dogs in little bodies.

They are sassy, full of energy, and want to be the apple of your eye.

They can be scrappy and dominant at times and like to think that they are the boss of the house.

This is for a few different reasons.

For one, the Chihuahua is a small dog and can be easily injured if played with too roughly.

Another reason is that the Chihuahua can be prone to snapping.

Still, with proper training and socialization, the Chihuahua can make an excellent companion for the right person or family.

This breed is very intelligent, and many owners describe Chihuahuas as being human-like in emotion.

They require lots of love and will demand all of your attention.

For the most part, white Chihuahuas are easy to care for.

They do not require a lot of exercise outside of the home, as their small stature makes indoor play an adequate enough activity to keep them healthy.

However, they can be stubborn and difficult to train.

They will need a patient and loving owner.

One who is willing to work with them on a consistent basis using only positive reinforcement, such as treats and praise.

Deciding If a White Chihuahua Is Right for Me

Chihuahuas are wonderful companions for the right person or family.

But how do you decide if you and a white Chihuahua would mesh?

Luckily, Chihuahuas are adaptable and hardy little dogs who do well in small apartments but can also thrive on large estates.

However, they would prefer to be the only dog in the household because, as we mentioned, they can be somewhat scrappy at times.

Chihuahuas will do best with owners who are home with them often.

They can become very attached to their family and can suffer from separation anxiety.

With proper socialization and consistent training, they are sure to steal your heart!

Remember, white dogs especially can be more prone than others to genetic deafness.

Proper breeding practices could make all the difference in the health of your white Chihuahua.

Reputable breeders will have certificates and paperwork proving their dogs have been health screened for any of the genetic issues prone to the breed, so don’t be afraid to ask for proof.

If you plan to adopt from a shelter, remember that adoption fees are typically only $50 to $100.

And many shelters will even take care of your dog’s first trip to the vet!

Do you own a white Chihuahua?

Tell us about it in the comments below.