You are here: Home / Dog Facts And Fun / Why Do Dogs Lick The Air, and Why Does It Matter? 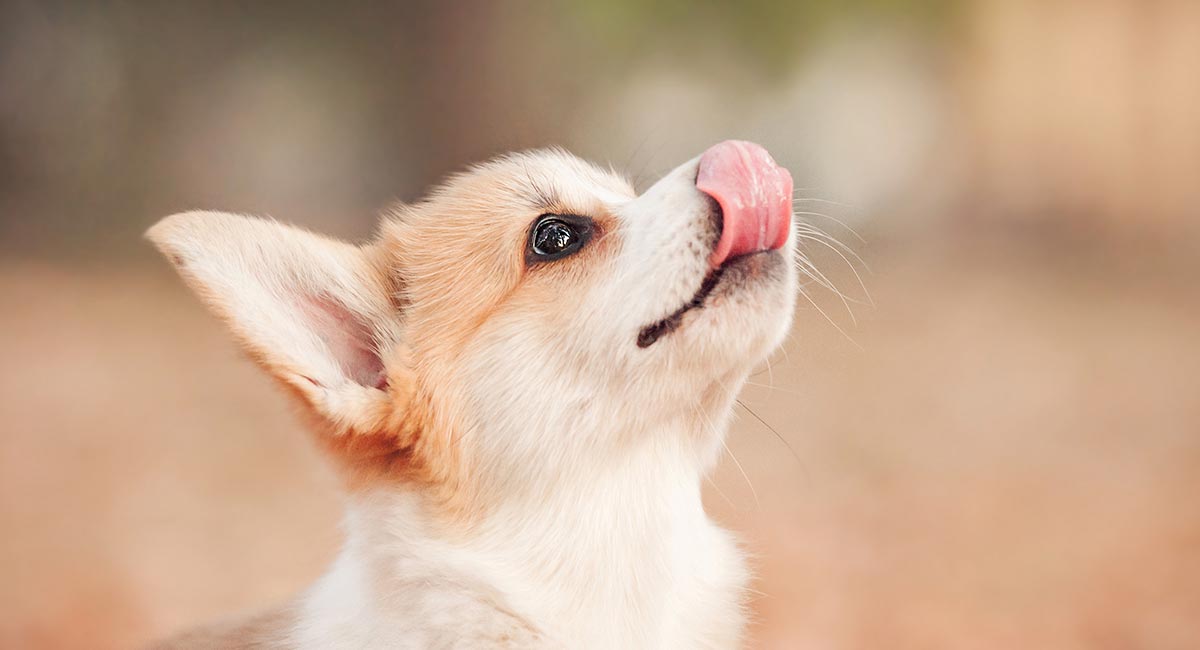 We all know that dogs lick themselves to keep their fur clean, but why do dogs lick the air? Are they trying to give you kisses, or is something bothering them? If you’ve seen a dog flicking his tongue in and out repeatedly for no apparent reason, it seems like a pretty strange thing to do.

Like so much in the world of animals, there are reasons for this behavior. But most importantly, sometimes it’s a sign that something is wrong.

When is Air Licking Normal?

Most dogs lick their own noses at times. Licking the nose helps to keep it moist which in turn enhances your dog’s ability to smell things.

A dog may lick his lips to remove food from his mouth, or to avoid dribbling when he is hungry and expecting his dinner.

What appears as air licking may just be your dog taking in a particularly strong scent. It’s part of a normal response to strong smells called the flehmen response.

If you’ve ever given your dog peanut butter, you’ve seen what happens when a dog has something stuck to the roof of their mouth. It appears as though they’re licking the air as they try to dislodge it. They’re usually able to take care of this problem themselves.

If air licking continues, a quick look in your dog’s mouth can determine if a bit of toy or treat is stuck. If you can’t remove it easily with a finger, it’s best to let your vet remove it.

Not all air licking is normal or harmless.

When a Dog Keeps Licking Air

When a dog keeps licking air, it’s not about a moist nose or strong smell, the remains of breakfast or excitement about dinner.

It’s a sign that your dog needs your help. 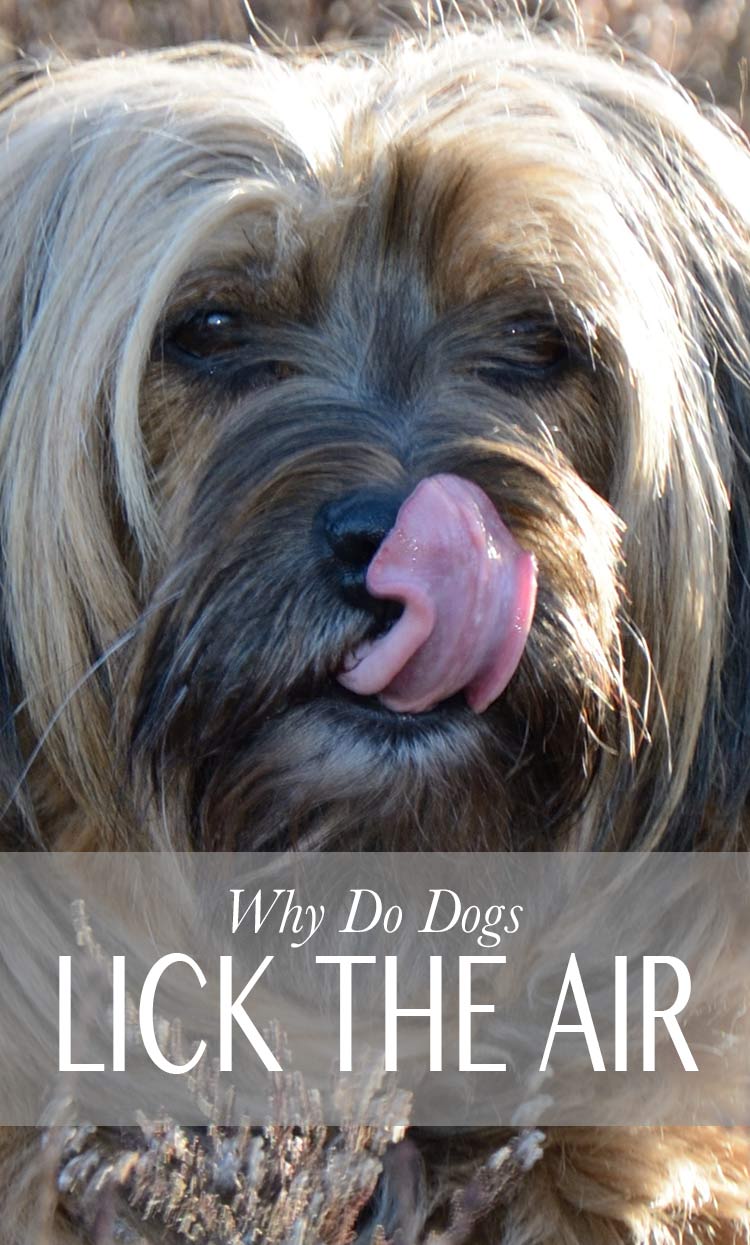 Why Do Dogs Lick the Air Occasionally?

On the simplest level, a dog may lick the air a few times to indicate he is feeling anxious or stressed.

Your dog is saying let’s be friends, I don’t want to fall out. Don’t be tempted to mock, film or scold him. He needs your reassurance.

Appeasement is likely to be the cause of air licking if the dog is being trained with punishment. Even mild, non-physical punishment.

In this case, the dog may lick repeatedly at the air when in a training situation, being stared at or watched.

He’ll usually stop air licking when you take the pressure off.

There are both physical and psychological reasons for air licking in dogs. Some of which can be serious if left untreated. If your dog is frequently and persistently air licking, you need to pay a visit to your vet.

You’ll need your vet’s help to identify or eliminate potentially serious health issues and get to the bottom of your dog’s behavior.

A Dog Constantly Licking Air May be Unwell

A dog with digestive problems may start air licking, especially if he feels nauseous. There are a range of potential problems that can cause nausea including changes in diet or taking medication.

Dental pain or injury may also cause air licking.

Your vet will perform a physical exam and may draw blood for testing. Be prepared to answer questions about your dog’s air licking behavior such as when it began and if anything seems to trigger it.

Videotaping your dog air licking, his reaction to your efforts to stop him and how long it takes before he starts again may be helpful. Alternatively, write down your observations of the air licking, including anything that happens immediately before it starts.

Sometimes air licking is associated with a type of seizure, known as a partial seizure. This is another reason why it is so important to consult a vet if your dog is persistently air licking.

Dogs may lick the air and snap at the air during a partial seizure. This is because seizures cause abnormal electrical activity in the brain that in turn triggers abnormal muscle reactions.

Your vet will be able to help if your dog is suffering from seizures. With medication, it may be possible to prevent them altogether.

If a medical examination and tests reveal no physical problem, your vet may diagnose a compulsive disorder.

When Air Licking is a Compulsive Disorder

Like people, dogs can occasionally suffer from compulsive disorders that cause them to repeat certain behaviors.

Air licking in dogs can be a compulsive disorder and may respond to treatment. For that reason, it is important to seek help from your vet.

A referral to an animal behaviorist for further help and support in resolving or managing the problem may be necessary.

Which Dogs Are More Likely to Lick the Air?

There are no breeds that are more disposed to air licking.

Dogs that are nervous or sensitive are more likely to air lick than confident, calm dogs.

Dogs suffering from stress or trauma may air lick repeatedly, after being rehomed for example. This may be an attempt to soothe themselves or to try and appease those around them.

Dogs that are ill are also more likely to lick the air.

My Dog is Licking the Air

If your dog starts licking the air more than occasionally, you’ll first want to rule out a source of stress.

Ask yourself if your dog has any reason to be anxious or upset. Have you changed his routine in any way? Have you altered the way you discipline him? Are you trying out a new type of training? 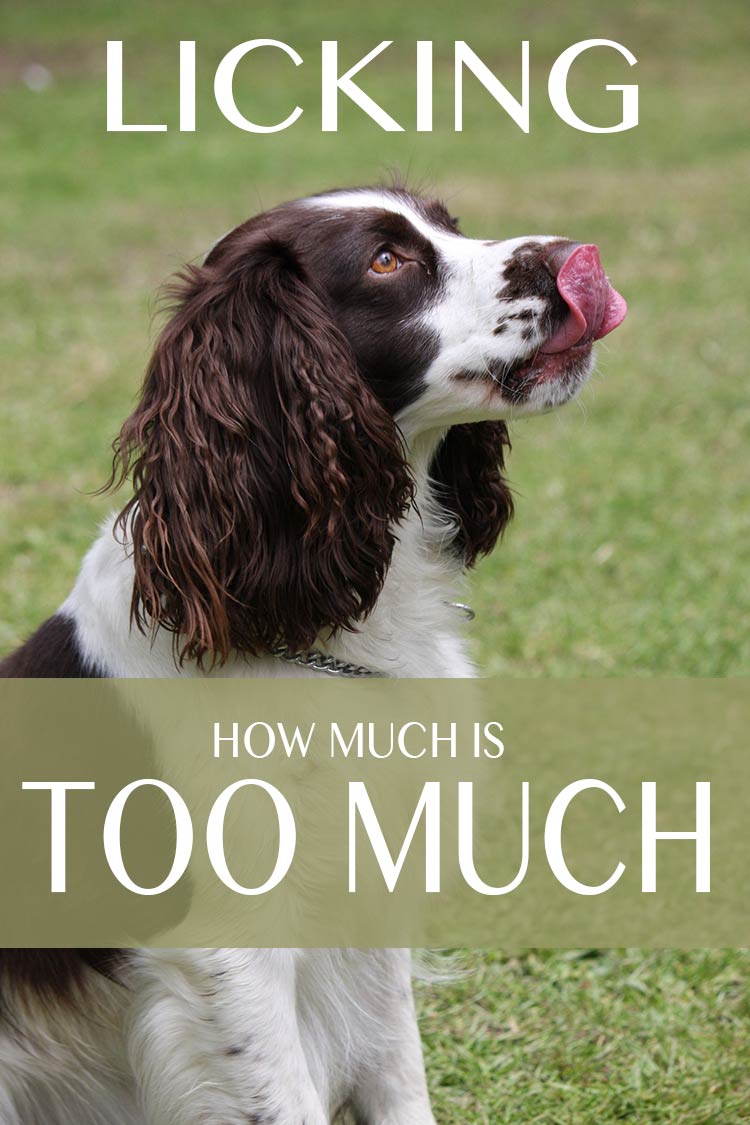 Has anyone special to him been absent? For instance, has another pet or family member died or moved away recently?

Unless the problem resolves when you reassure and comfort your dog or change your training methods, it’s best to consult your veterinarian.

Why Dogs Lick the Air – Summary

Persistent and excessive air licking in dogs can be caused by

If you can’t think of anything that could be making your dog anxious or stressed, or if the air licking continues, make an appointment to get your dog checked by a qualified vet.

Your vet can determine if there are any physical or medical issues causing your dog’s air licking.

If a veterinary examination and tests reveal nothing, your vet may diagnose a compulsive or behavioral problem such as a compulsive disorder. They will also be able to suggest ways to manage or resolve the problem.

Prompt veterinary attention is important as the longer you leave an air licking problem, the harder it may be to treat successfully.