You are here: Home / Dog Facts And Fun / 22 Pug Facts – How Well Do You Really Know Your Favorite Dog? 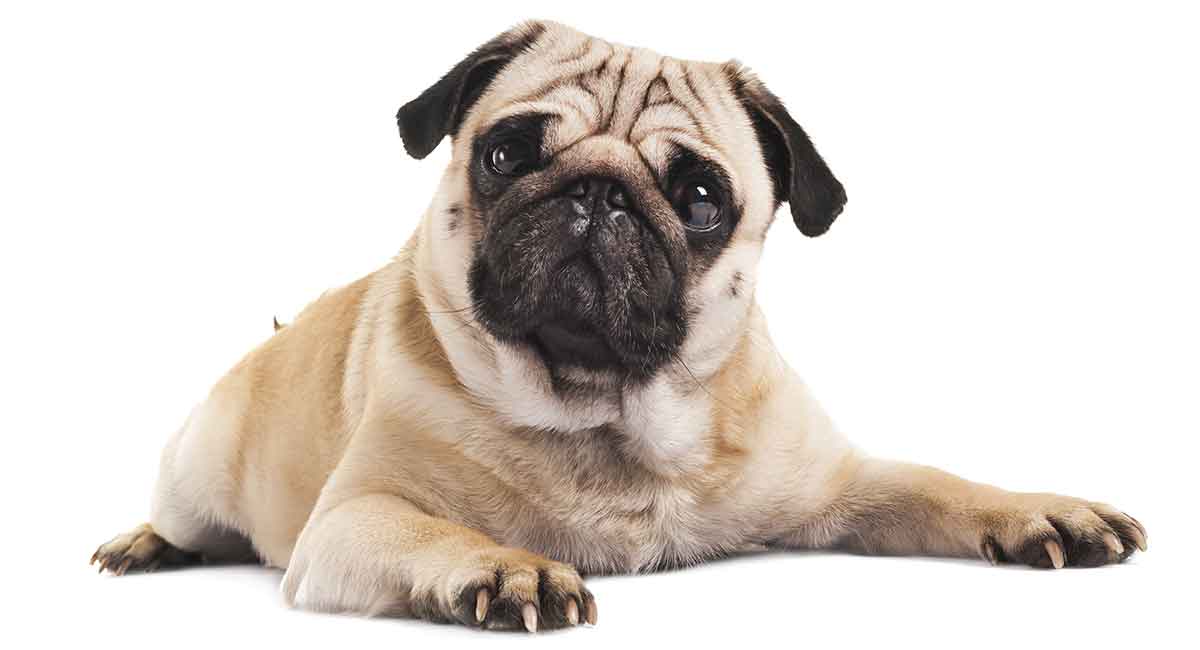 Sorting out Pug facts from Pug fiction is important before taking the leap from casual admirer to committed dog owner.

Pugs are more popular than ever, not just because of celebrity endorsements and advertising, but also because of their reputation as easy going, lovable dogs with human-like facial expressions.

In this article we’ll delve into the most common beliefs about pugs and how many of them are fact vs. fiction.

Pugs are small, square-bodied dogs that originated in China.

It is believed that they were lap dogs to the ruling Chinese families in ancient times and were kept in luxury.

Their snouts are flatter than other dogs and their faces have a wrinkled appearance, making them highly distinctive.

They are silver, fawn or black in color, with a short, smooth, glossy coat and a curly tail. Check out our main page on Pugs here.

Read on for some of the most common perceived facts about Pugs and whether they are true or not.

Pugs score higher than average for excitability according to a study of 30 different breeds.

They are more likely to get excited and stay excited when the doorbell rings or it’s time for a walk or trip out in the car!

However, each dog is different and not all dogs are going to feel upbeat all the time. Pugs also really love to sleep and, in fact, having too much physical activity can put a serious strain on their delicate respiratory systems.

So, yes your Pug is likely to be fun-lovin,’ but don’t forget to chill out too!

Fact 2: Pugs get on well with other dogs

Pugs do score much lower for aggression towards other dogs than other breeds, such as the Miniature Schnauzer or Dachshund.

But again, each dog is unique so don’t expect your new Pug to immediately fall in love with your other dog(s).

True. But, snoring is not just something annoyingly adorable that you joke about when you own a Pug.

The truth is that Pugs, and all flat faced breeds, suffer from Brachycephalic Airway Syndrome, or BAS (their nasal cavities are shortened and airflow is reduced), which impacts their ability to breathe.

In fact, the air resistance is so increased in Pugs that when they exhale they have to force the air out; Hence their noisy breathing and snoring.

Over time, this leads to nasal inflammation and swelling that can cause acute respiratory distress. So, that “hilarious” loud snore has the potential for serious health problems.

Related to Fact 3, Pugs do have sleeping problems.

Sometimes Pugs will have choking fits in their sleep. Somethimes they can’t seem to get to sleep at all. We all know what it’s like to have a blocked nose/sinus issues and a hard time sleeping sometimes, but imagine if you had to deal with it every day!

Fact 5: Pugs are difficult to train

Pugs have lower than average scores for trainability, but that doesn’t mean they are untrainable.

In fact, persevering with house and other forms of training is not only good for you and your home, it’s good for them too.

Training with your Pug can be a wonderful opportunity for social bonding and intellectual stimulation for your Pug. Starting early is advisable, with lots of socialization and positive reinforcement.

Puppy classes have been shown to significantly reduce problems with behavior in later life. In time, your Pug can be fully house trained and a joy around others.

Pug Dog Encephalitis (PDE), also known as necrotizing meningoencephalitis, is a fatal inflammatory central nervous system disorder that is common in this breed. It is most likely to affect young adult, fawn color female dogs. Symptoms include seizures, lethargy, blindness and eventually coma. The cause is unknown, however there is genetic testing available.

It’s true that many Pugs have health disorders including eye problems, breathing problems and skin problems.

A recent study in the UK of over 1000 Pugs showed that 68% had at least one disorder! The most common disorder was overweight/obesity, followed by corneal (eye surface) disorders and then ear infections.

Just because they enjoy snoozing doesn’t mean Pugs are lazy! Pugs need exercise just like any other dog.

However, their tolerance for exercise is much, much lower than some other breeds and they won’t be able to accompany you on your morning run.

This low tolerance is largely due to their flat face, which makes breathing difficult and enables them to overheat easily.

So, please don’t think your Pug is lazy. Remember to walk your dog, just don’t overdo it!

Any dog that eats too much and doesn’t get enough exercise is prone to being overweight.

Pugs love their food and need to be limited so they don’t overeat. Coupled with their love of naps, overeating can lead to an overweight pooch in no time!

However, with regular, appropriate exercise and moderated food intake, your Pug doesn’t need to be overweight at all. Maintaining your Pug at their optimum weight will keep them healthier, and you both happier!

Fact 10: Pugs love being dressed up

It’s not uncommon to see advertisements or articles depicting Pugs in dress-up costumes.

My ten-year-old daughter recently showed me a full page in one of her kids’ magazines devoted to a Pug in a Superman costume!

However cute they may look, Pugs don’t necessarily enjoy being dressed up, and it’s the responsibility of the owner to make sure that they are not making their dog uncomfortable and unhappy, just to wear a costume.

This may be an important factor in choosing a Pug as your next canine companion.

Their faces are so wrinkly and expressive that it’s hard not to find them attractive. But it’s important to know where that face comes from and what it costs each Pug in order to have it.

Brachycephalic Airway Syndrome (BAS) is no joke and it severely impacts a Pug’s quality of life.

BAS is a direct result of breeding for a flat face, like that of the Pug, and it makes nasal cavities shorter and more resistant to airflow, which makes it difficult to breathe.

Not so attractive now, is it?

According to one study, Pugs have lower than average stranger-directed aggression. This makes them less adept as guard dogs than some other breeds like the Doberman or German Shepherd, but of course each dog is different and has their own personality.

If a reliable guard dog is what you’re after though, you’d probably do better with another breed.

Fact 13: Pugs aren’t afraid of anything!

Pugs do show much less fear towards strangers than many other breeds and average fear towards other dogs or strange noises.

Nevertheless, they have a higher fear of separation and touch sensitivity than other dogs. They are more likely to have a fear of being alone or being handled or groomed. Each dog is different though. Don’t expect your Pug to be fearless or fearful in any situation until you know his/her personality.

Also, training classes while young (or at any age, if you’ve rescued an adult) can improve your dog’s sense of wellbeing around and away from you.

If you’re worried about your Pug hunting down a squirrel or bird at the park…don’t! Pugs score low on predatory chasing compared to other breeds (like the Miniature Schnauzer and Siberian Husky).

Fact 15: You can stop a pug from shedding

False. Pugs will shed all year long and there is no way to stop it. You can, however, mitigate the effects by vacuuming often and grooming your Pug regularly.

Fact 16: Pugs eyes can pop out

True! Pugs eyes have been bred to be large and bulge out in a shallow socket, without much space for the eyelid to close over the eyeball.

The result makes them susceptible to many eye problems, including having their eyes pop out of their sockets, known as proptosis.

In Pugs, and other brachycephalic breeds, minimal trauma is required to cause the eye to pop out, and the event is a true emergency.

Proptosis requires immediate veterinary attention, including surgery and other medical interventions. It is possible to reposition the eyeball and recover completely, without loss of vision, though complications are common.

False. Chocolate is poisonous to all dogs.

Some chocolates have less of the chemicals, theobromine, and caffeine, that induce symptoms, and larger dogs may be able to tolerate more than smaller dogs.

However, it is never advisable to feed chocolate designed for humans to your dog. Chocolate poisoning results in the heart beating too fast and can be accompanied by vomiting, diarrhea, seizures and, with excessive consumption, death.

False. Pugs are, in fact, among some of the more intelligent breeds of dog, especially with regards to knowing their owner’s feelings and intentions.

Because of their high excitability, Pugs can bark quite a bit when something interesting is happening, like the doorbell ringing. However, there’s no evidence that they bark more compared to other breeds and they certainly don’t fall under the term “yappy dog.”

True. Pugs, like all dogs, are able to swim. However, because of their breathing problems, they need frequent rests and cannot swim far or for very long.

Canine Hydrotherapy is a controlled swim with a veterinary professional that can provide huge health benefits, and has all the fun of swimming, without the risk!

Fact 21: Pugs are meant to be lap dogs

There’s no doubt that the breed conformation for Pugs makes them relatively intolerant to exercise and heat, making them suitable and sedate indoor companions.

In addition, their friendly nature and small stature would seem to make them ideal lap dogs.

However, just because they are small and physically limited doesn’t mean they don’t want to run around like a healthier dog! In fact, they are more excitable than most! It is up to the owner to make sure the Pug gets enough rest, but also enough stimulation and exercise to ensure a happy life.

Unfortunately, it can be extremely challenging to match the Pug’s rampant enthusiasm with its diminished physical capabilities.

Fact 22: The Pug breed is a miniature Bulldog

Apart from their similar physical appearance, there is no conclusive evidence that the Pug dog originated from the Bulldog.

Instead it is most likely a close relative of the Mastiff. Both Pug and Mastiff breeds originated in China, before the Bulldog breed was developed.

Is A Pug Right For Me?

Pugs are popular for many reasons, including their human-like faces. There’s no doubt that they can make a loving addition to any family. However, a Pug’s appearance is directly responsible for a whole host of health concerns related to this breed.

The deliberate breeding of dogs with known serious health complaints is immoral and we can do our part to stop it by never buying a Pug from a breeder.

If your heart is set on this breed, consider rescuing an adult. Otherwise, you might like to try the similarly sized Border Terrier or Fox Terrier, or the similarly good-natured Beagle or Greyhound, none of which have serious health problems inherent in their breeds.

Greer K. A. et al. “Heritability and transmission analysis of necrotizing meningoencephalitis in the Pug,” Research in Veterinary Science.

Serpell, J. A et al. “Dog Breeds and Their Behavior”