You are here: Home / Breeds / Pitbull Ears – From Hearing To The Controversy Of Cropping 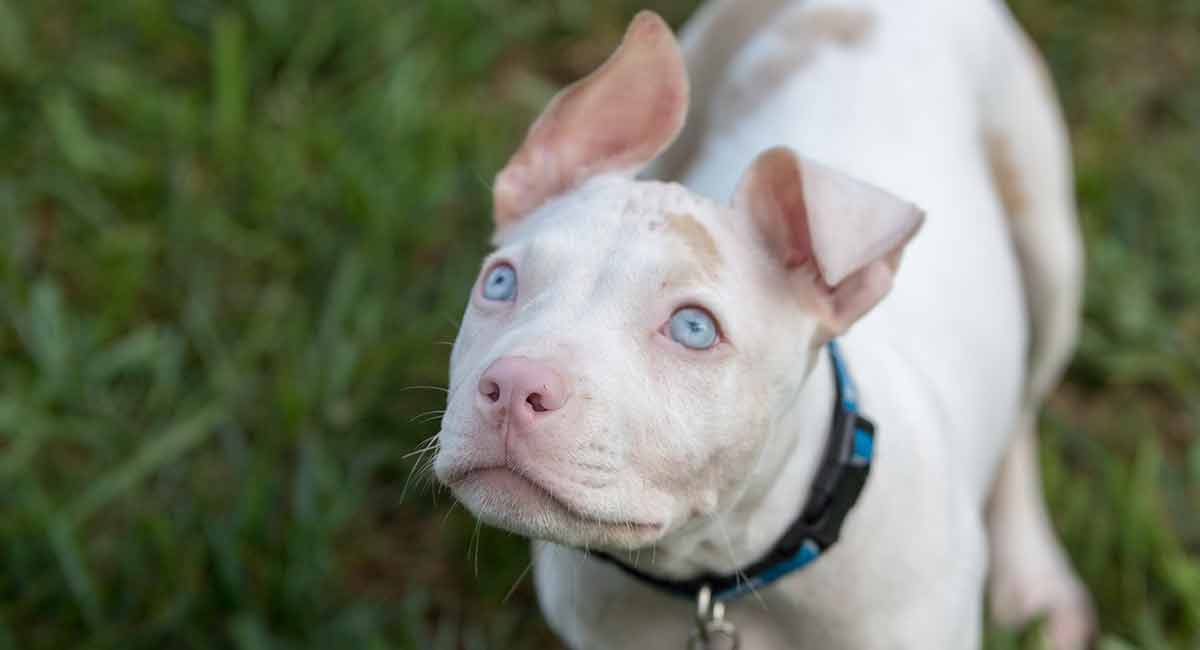 Pitbulls are easy to recognise, but have you ever given much thought to Pitbull ears?

Interestingly, Pitbull ears have a part to play in their PR.

Their natural ear shape is similar to that of greyhounds, a breed hardly thought of as intimidating.

But a fashion for cropped ears lends them a tougher visage, which makes those unfamiliar with the breed uneasy.

There’s a certain similarity of appearance between Pitbull puppies and Labrador puppies.

Both are sturdy chaps with a teddy-bear snout, short coat, and drop ears. Indeed, there’s something undeniably cute about both breeds.

Looking specifically at puppy Pitbull ears, they are softly folded leathery flaps, which appear a little too big for their head.

This gives the youngster an appealing, almost quizzical look, which is at odds with their adult reputation for aggression.

Indeed, their particular Pitbull ear shape has a name, which is ‘rosebud’ ears. This reflects the slight upward curl in the cartilage of the ear from in the front of the ear. This partially lifts the softly folded flap to give that enquiring look.

Examples of other breeds with rosebud ears include greyhounds, whippets, and pugs.

As the Pitbull puppy grows and their head enlarges, so they grow into those outsized ear flaps. The ear cropping procedure is done young from just three days to 12 weeks of age.

By the time the Pitbull is an adult, their rosebud ears are more in proportion to their head. Draw the tips of those rosebud ears forward, and they just about reach their eyes.

The ear flap (or pinna) is composed of a sheet of cartilage, sandwiched between velvet-haired skin. Lift the pinna to see the entrance to the ear canal. The latter is a long, L-shaped tube-like structure which extends from the external ear down to the eardrum.

When the Pitbull’s ears were cropped as a pup, the pinna is cut to a pointed, prick shape. The natural curl in the cartilage helps the shortened ear flap to stand erect; in the same way that curling a piece of paper on itself means it can support itself.

Cropped Pitbull ears gives them a prick-eared similar to that of a wolf ear. This is a purely cosmetic change to the appearance of the dog, and has no health benefits.

In part this practice is done to conform to breed standards, and in part to make the dog look more imposing. The latter point is especially questionable, as it does nothing to help the breed’s bad press.

This cosmetic change to the dog’s looks can have real consequences for the dog themselves. Ears are expressive things and an important part of dog body language.

It makes it harder for other dogs to read the Pitbull, which in turn can lead to misunderstanding and fights.

And finally, it’s important to consider the dog’s welfare. Cropping is a painful procedure, which could mentally scar a young pup.

Even amongst vets there is controversy about whether healthy ears need cleaning, and if so, how often to do it.

In part this is because all dogs are different, so what suits one individual, doesn’t work for another.

How Often to Clean Pitbull Ears?

Correct ear cleaning has benefits. It reduces the amount of wax in the ear canal, which makes the canal a less hospitable place for yeasts to live. Cleaning also removes bacteria, which might otherwise breed out of control and set up an infection.

Cleaning also lets the owner get familiar with what’s normal for their dog’s ears. Then if the canal becomes infected or inflamed, it’s easy to spot the difference and get the dog checked by a vet.

How to Clean Pitbull Ears

When cleaning ears, it’s essential to use a good ear cleaner designed to be used in dogs.
A good cleaner has properties such as being the same pH as the dog’s skin, and therefore doesn’t sting or dry the canal.

The best cleaners are also effective at dissolving wax, so that it can be lifted out to the surface. In addition, they evaporate easily, leaving behind a dry ear canal.

Never use water, rubbing spirit, or harsh vinegar to clean out Pitbull ears. These all have the potential to damage the delicate microclimate within the ear canal, and do more harm than good.

To clean the ears, gather the supplies in preparation. These include:

Get your Pitbull Ready

Get your dog ready by fondling their ears, whilst praising the dog and giving treats.

It helps to have the assistance of a friend. Sit the dog in the corner of a room, so they can’t back away. Have the assistant cuddle the dog to keep them still; leaving both your hands free to do the cleaning.

Lift the ear flap. The entrance to the ear canal is seen as a dark opening. Place the nozzle of the ear cleaner bottle over this hole, and squeeze gently. Be generous about the amount of liquid used. A regular Pitbull ear canal can hold around 5 –7 ml (just over a teaspoon) of fluid.

Now plug the ear canal with a piece of cotton wool. Gently massage below the ear plug. Hearing a squelchy noise is a good sign you’re in the right spot. Now remove the ear plug and let the dog shake their head. (Watch your eyes at this point. Ear cleaner in the eye will sting!)

Use a clean piece of cotton wool to wipe away any excess cleaner and wax that has been dislodged. Now repeat with the other ear.

Never use Q-tips to clean Pitbull ears. These are easily pushed too deep into the ear canal, causing pain or even damage to the eardrum.

It is a sad fact that many Pitbull’s with cropped ears are ear phobic.

This is due to the traumatic experience of amputating their ear flaps at a young age.

Dogs resent having their ears handled and it makes it difficult to deal with inevitable infections.

This condition refers to when the ear flaps fill with blood, creating a large blood blister.

This occurs as a result of the dog repeatedly scratching their ears or shaking their head. This shears tiny blood vessels running between the skin and cartilage, causing them to seep into the space between.

Ear mites are tiny bugs, belonging to the same family as spiders. They inhabit the ear canal where they live off surface debris and skin cells, causing intense irritation.

These critters are highly infectious and pass readily between pets. If one pet in the household has ear mites then all the other pets should also be treated and their bedding washed.

Skin lines the ear canal and hosts a population of bacteria. If the skin’s natural immunity takes a dip, these bacteria can breed unchecked and set up an infection.

Common factors that encourage ear infections include swimming (water in the ear makes the skin weak) and allergic skin disease.

An active Pitbull is liable to spend time in long grass and woodland. Whilst exploring they are liable to sweep small objects, such as grass awns, into their ears. If these migrate down the ear canal, this causes intense irritation and pain.

As with any dog, if a Pitbull shows since of ear irritation, then a vet check-up is advisable.

The ear canal is a long tube and only a small part can be seen with the naked eye. A vet exam with an otoscope allows deep inspection of the ear canal. This helps identify problems such as a foreign body trapped in the canal or the start of an ear infection.

In fact, ear problems rarely settle down by themselves. But early treatment will most often settle the issue down quickly. This can save the dog a lot of discomfort and distress, so they can get on with the important job of being your best pal.

Do you have a Pitbull?

What are your thoughts on ear cropping? We’d love to hear from you in the comments below.

What shape is your dog’s ears?

Instructions for Ear Cleaning in Dogs

Ear Mites in Cats and Dogs