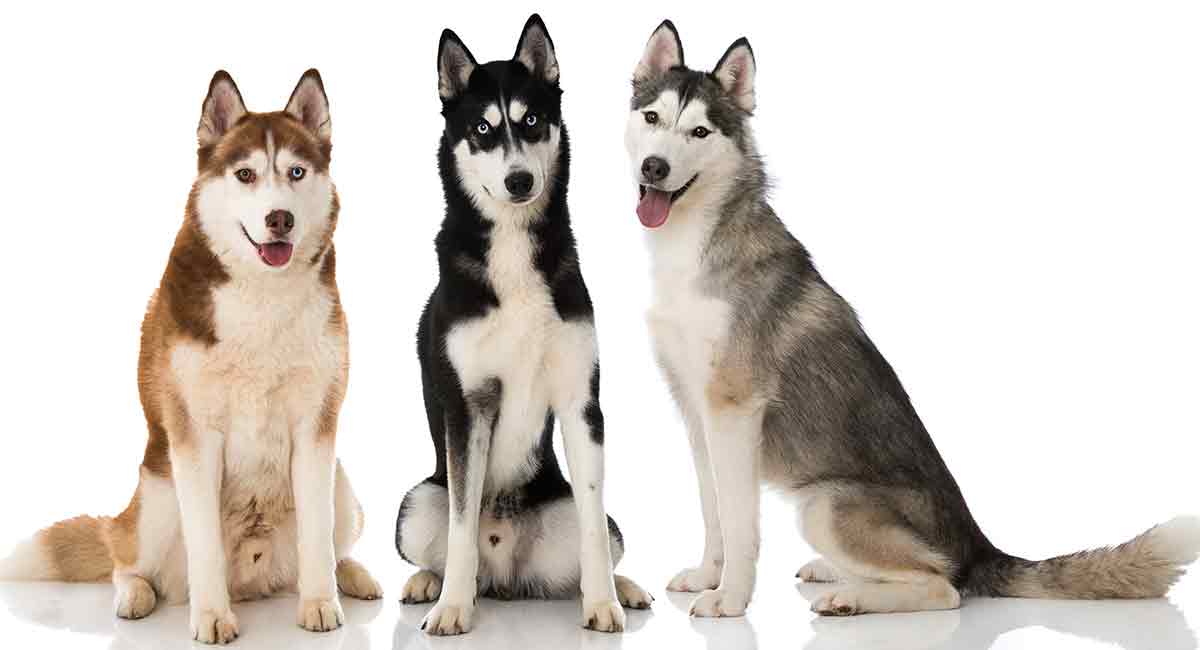 Husky colors come in a variety of shades and patterns. Their standard coat combination is white and agouti, black, grey, red or sable, but they come in other colors too. Some coat patterns, like Merle, are also associated with health issues. Whether it’s the brave Siberian Husky or the powerful Alaskan Husky, their coats are instantly recognizable. Siberian Huskies have worked side-by-side with people for centuries, hunting, hauling and helping. Today we share the different colors and patterns on this amazing breed with photos and pictures to help you tell them apart!

You may be wondering if the Siberian Husky and the Alaskan Husky are the same dog.

The Siberian and Alaskan Husky both have thick fur coats, erect ears and piercing eyes. However, there is a key difference! The Siberian Husky is a purebred dog breed that is bred to conform to an official standard. This breed standard details everything from Siberian Husky colors to eye colors to temperament traits and more.

Technically the Alaskan Husjy could be any combintion of canine colors in a variety of patterns. But in reality they are usually black or brown and white, in the same bi color pattern as the Siberian Husky.

History and Origins of Husky Colors

Interestingly, one thing has changed between modern Siberian Huskies and their wild wolf ancestors. Siberian Husky dogs today are bred in two sizes: standard and miniature. However, mini Husky colors and standard Husky colors are the same for the most part.

The genetics of dog breeding can quickly become complex. For starters, it can be challenging to identify single genes that are responsible for producing certain Husky colors. Often, the same gene(s) that control for coat color may also influence other developmental processes. In particular this includes the development of vision or hearing.

Are Some Husky Colors Healthier Than Others?

There are no disallowed Husky colors, patterns or markings due to health issues. However, some breed clubs have identified the “merle” and the “brindle” pattern of markings as concerning.

The Siberian Husky Club of America (SHCA) has released a statement indicating that these marking types may be the result of genetic influence from other dog breeds. In other words, dogs bearing these markings may not be true purebred Siberian Huskies.

Health Issues in the Merle Husky

In addition, the SHCA states they are not supportive of the merle pattern. This is due to its association with certain known canine genetic health issues. These include:

These health issues can become more severe. For example, when a breeding pair of Siberian Husky dogs is each carrying the gene that contributes the merle pattern. This produces what is called a “double merle.” Health issues resulting from a double merle are not always fatal. However, they can be particularly life limiting to the point of requiring euthanasia. Examples of such health issues include:

The Siberian Husky color chart is so varied it has been nicknamed the “Siberian Rainbow.” The following colors are standard:

The following colors are recognized but not standard on the Husky color chart:

The breed standard states that the following markings are not standard but are recognized:

Husky colors vary massively from one dog to the next. In fact, no unusual or rare colors, patterns or markings have been identified!

The current American Kennel Club (AKC) Siberian Husky breed standard allows for all colors, including pure white. The breed standard specifies that it is quite normal to see a wide variety of visually striking patterns and markings on the head.

This means there can be literally infinite combinations of colors and patterns and markings. None of them will disqualify a pedigreed purebred Siberian Husky from competing in the show ring.

Colors can range from a single solid (self) color to a multi-color pattern or solid colors alternating with markings in a vast array of variations. These colors are generally acknowledged as the most common coat colors in the purebred Siberian Husky today:

The gray color can be dark “wolf” gray, matte gray or a dilute gray that appears yellowish. The
Siberian Husky color silver is another form of dilute grey.

The white color can be solid pure white, or white with a yellowish or cream cast. There may also be black guard hairs. Typically the undercoat is pure white.

The red color range can span the gamut from a dark rusty brownish red to a light, strawberry blonde red. Copper is one form of red.

Husky coats can be single-color (self color) or solid. Alternatively, they can form a pattern with two or three colors that all appear on the coat. Two of the most common colors and patterns are black and white and a pattern called “splash.”

The black and white color pattern is a quite common one for Siberian Huskies. The black color can show up as jet black, black banded or dilute (can appear silver).

The gray colors can range from dark wolf gray to a yellowish gray to silver gray alternating with white.

With a red and white color pattern, there generally will not be any black in the coat. However, the red can range from a deep reddish brown to a light coppery red alternating with white.

Sable is a color pattern formed when the undercoat is reddish/copper and the top coat hairs are banded with red nearest the skin and black at the tips. This pattern alternates with white.

The wild wolf “agouti” is described more below. With this pattern, agouti alternates with white.

The official Siberian Husky breed standard highlights the three most frequently seen colors and markings. However, even within these three types of markings, it is possible to see nearly infinite variations!

Typically the undercoat (the soft, thick, insulating under-layer) is dark in Siberian Huskies with agouti markings. The outer coat has multi-colored hairs. They are dark at the base (nearest the skin) and at the tip. In between is a lighter color.

The sable marking starts with a reddish or coppery undercoat. The outer coat hairs are reddish at the base (nearest the skin) with black coloration at the tip.

The piebald markings, called “pinto” in the AKC breed standard, are quite different from either agouti or sable. In piebald Siberian Huskies, one coat color will predominate and one or two other colors will show up as a pattern of markings.

Most Huskies have a standard double coat. This has a downy undercoat and an outer coat that feels smooth to the touch. It’s medium length and shaggy looking. However, occasionally purebred Huskies have what is known as a wool coat. This is longer than the standard coat, and feels denser and fluffier.

So which is the best Husky color? Please drop us a comment to share your favorites! And make sure to check out some color inspired Husky names!