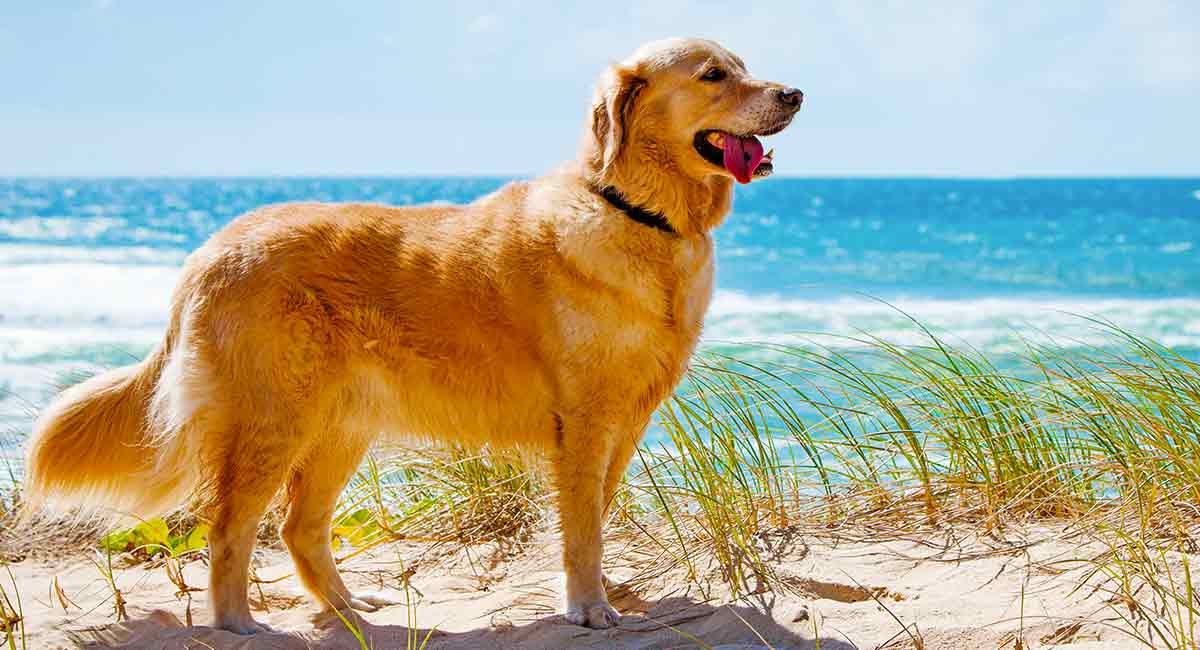 If you have a Golden Retriever or are thinking about adopting one, you are probably wondering how long do Golden Retrievers live. In this article we take a detailed look at the typical Golden Retriever lifespan and how you can help your Goldie to live as long and happy a life as possible.

According to the American Kennel Club, they are ranked 3rd in popularity, beaten by only the Labrador Retriever and the German Shepherd.

No doubt, this popularity comes from the fact that they are extremely suitable pets.

They’re friendly, intelligent, and extremely devoted to their owners.

However, one of the first things you should find out before potentially adopting a new pet is their lifespan.

After all, your pet will depend on your for care its whole life, and you must be sure that you can actually provide care for the animal for the whole time it is alive.

How Long Do Golden Retrievers Live?

Today, the average lifespan of a Golden Retriever is between 10 and 12 years.

However, only decades ago Golden Retrievers lived to be much older, usually around 16 to 17 years.

For a long time, scientists were baffled at why the Golden Retriever lifespan was dropping so quickly without an apparent cause.

To find out why Golden Retrievers have begun to die sooner than they did only mere decades ago, scientists designed a survey that takes into account environmental factors, genes, and health conditions that might affect a Golden Retriever’s lifespan.

We will discuss this survey and the implications later in our article.

For now, let’s look at how specifically cancer affects the Golden Retriever lifespan.

Golden Retrievers die from bone cancer, lymphoma, and blood cancer more than any other breed.

And no one knows why.

Golden Retrievers are also more prone to other types of cancer, even at an early age.

For example, one Golden Retriever was diagnosed with uterine carcinoma, or cancer of the uterus, at only 10 months old!

This is the youngest instance of this type of cancer every reported.

Some factors have been tied to this increased cancer risk.

According to one study, the early neutering of Golden Retrievers led to an increased occurrence of certain cancers and hip problems.

However, research on the factors that contribute to Golden Retriever’s short lifespan is early and inconclusive.

We don’t know exactly why Golden Retrievers are suddenly dying earlier than they were only decades ago.

There is a study though, that is seeking to change that.

This study is being undertaken by the Morris Animal Foundation and just kicked off in 2015.

This study is looking at a number of factors, from heavy metals found in water to the pet’s routine and even physical traits, to discover if there is any correlation between these factors and cancer.

The main goal, according to Veterinary News, is to create a comprehensive database of over 3,000 purebred Golden Retrievers.

This database will then be used to assess whether there are any conditions and lifestyles that correlate with an occurrence of cancer.

Though the survey is far from over and will probably take another decade to complete, scientists are hopeful that they will discover the cause behind these beloved dogs’ rising cancer rate and quickly dropping lifespan.

In the meantime, it is likely that Golden Retriever lifespans will continue to drop.

How Long Do Golden Retrievers Live Other Factors

Of course, there are other factors that also contribute to the Golden Retriever lifespan.

Golden Retrievers are prone to hip and joint problems.

While these will probably not cause the death of a Golden Retriever, joint and hip pain can greatly reduce their quality of life.

Luckily, there are some things you can do to increase your Golden Retriever’s likely lifespan.

This study found a link between commercial grain-free diets and health problems like taurine deficiency and dilated cardiomyopathy in Golden Retrievers. Their development is often multifactorial, and influenced by a number of things. But it’s still important to ensure your Golden has a healthy balanced diet.

Choosing a Golden Retriever puppy that is not genetically disposed to health problems can also help.

While it is sometimes difficult to identify dogs with healthy genes, you should always check on the health of a puppy’s recent ancestors to ensure that they do not have hip problems.

The oldest ever living Golden Retriever was 20 years old when he passed away.

How Long Can a Golden Retriever Live?

Most Golden Retrievers live to be between 10 and 12 years old.

Genetic factors play a large role in how long a particular canine lives.

Genetic factors likely play a role in a pet’s susceptibility to cancer, which can decrease their lifespan considerably.

Hip and bone problems can also factor into a dog’s quality of life as they age.

Genetic factors also play a role in these disorders, though being overweight is also a big factor in Golden Retriever lifespan.

Do you have a Golden Retriever?

Let us know how old they are in the comments below!