You are here: Home / Dog Facts And Fun / Canine Bloat – What It Is And How To Protect Against It 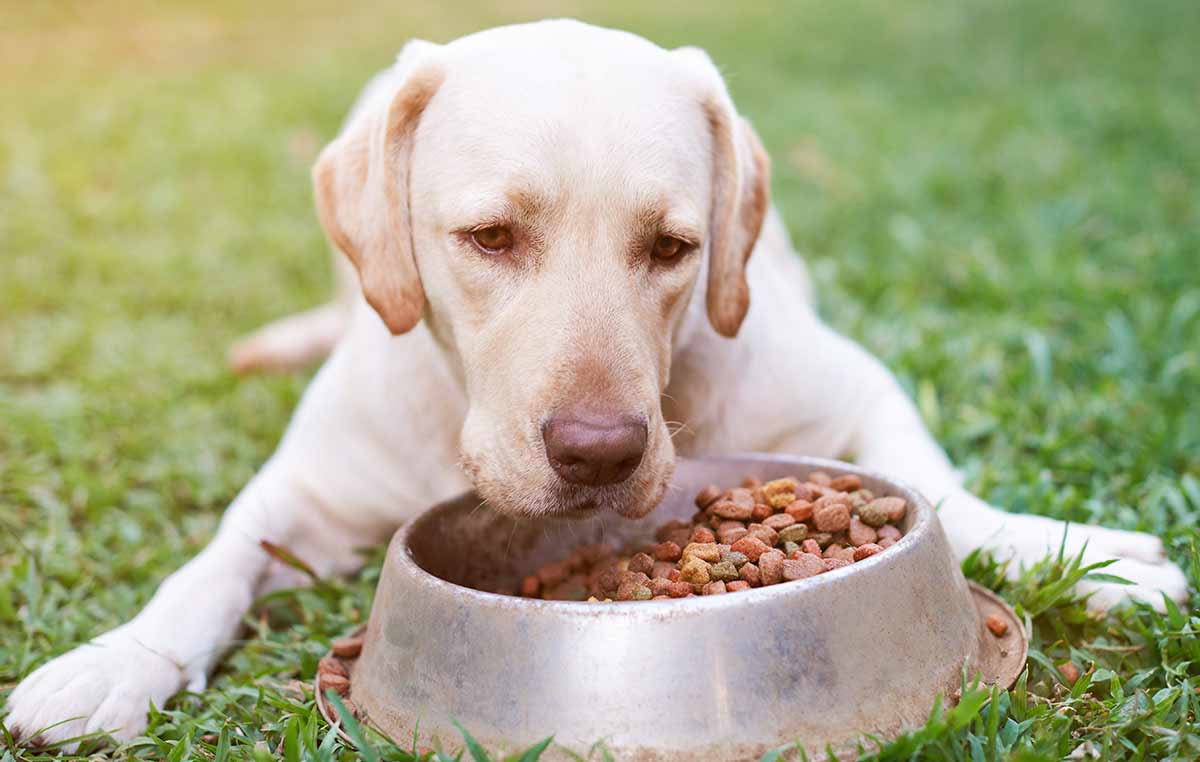 These are severe and sudden onset conditions which can affect any dog, but are most commonly seen in the large, deep-chested breeds.

They can be fatal without immediate veterinary attention, so it’s vital that all dog owners can recognize the symptoms and when to seek help.

Gastric dilatation is when a dog’s stomach fills with fluid and gas after a meal.

This can happen so rapidly, and to such an extent that neither can leave again. The pressure inside the abdomen can also cause the stomach lining to rupture.

Gastric dilatation volvulus (often referred to as GDV) is when the swollen stomach twists around.

This cuts off the blood flow around the stomach, and prevents blood from returning to the heart.

This causes abdominal issues become starved of oxygen and die. As they deteriorate, the chemicals they release send other organs into shock.

Both gastric dilatation and GDV are usually acute and sudden onset.

But some dogs do experience chronic gastric dilatation.

These dogs exhibit more subtle symptoms – including flatulence, vomiting and weight loss – over a long period of time.

This condition is still very uncomfortable, and if your dog suffers from it some of the preventative measures we’ll look at later might help. As will talking to your vet. 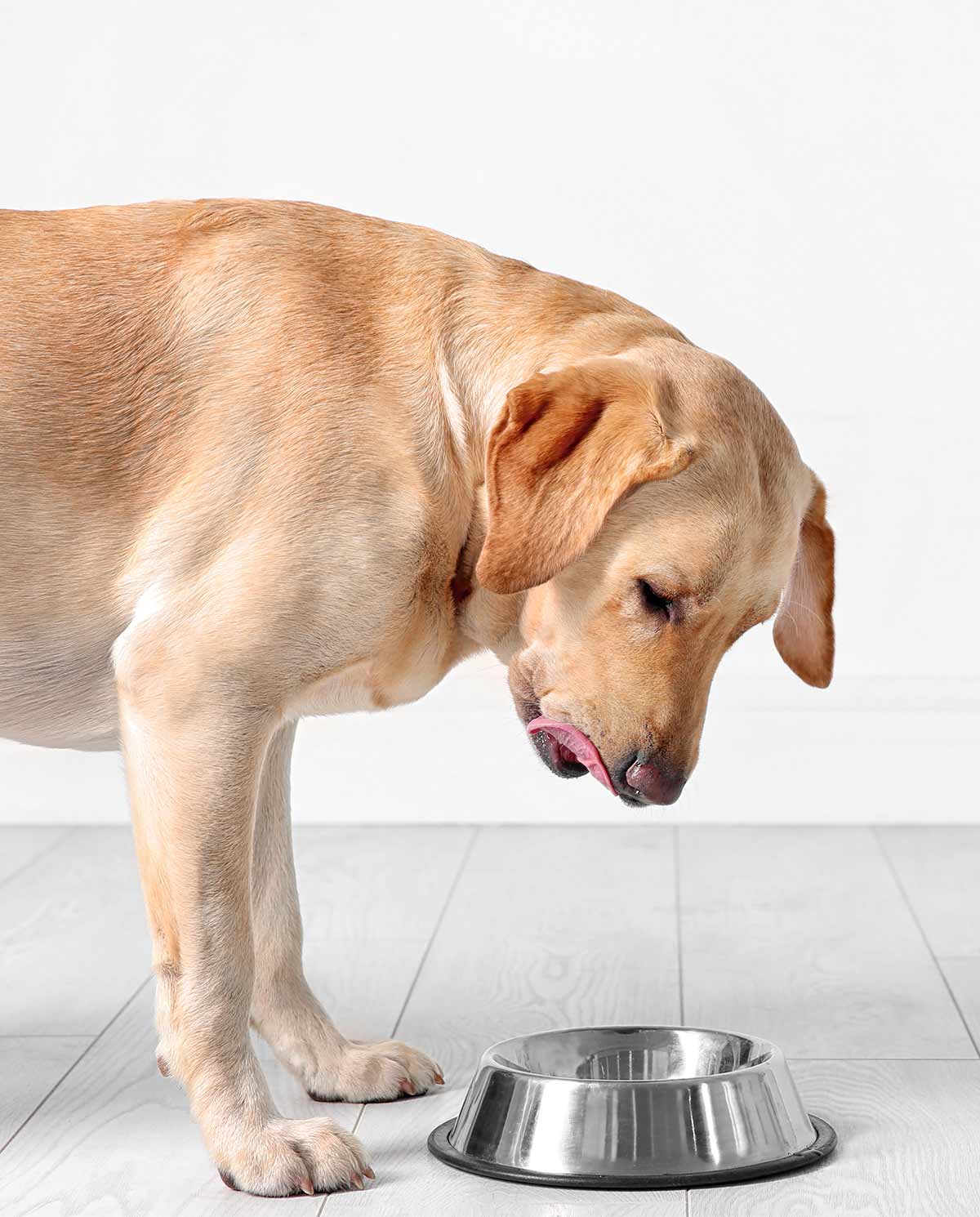 Signs and Symptoms of Bloat

The symptoms of acute canine bloat appear and increase in severity very rapidly.

As the situation progresses, your dog will

For simple gastric dilatation, your vet will take immediate steps treat your dog for shock and empty the stomach of gas.

They are likely to give your dog oxygen, and insert a tube down their throat to release the trapped air.

They might also recommend washing out the fluid left in your dog’s stomach (called “lavage”).

Even if a dog reaches the vet quickly enough to receive surgery, this doesn’t guarantee they’re out of the woods.

In a 1995 review of GDV cases, 30% of dogs who underwent a partial gastrectomy to correct bloat still died or had to be euthanized after surgery.

What Makes a Dog More Likely to Suffer Bloat?

Large breeds have consistently been found to be at greater risk than smaller breeds.

A large thoracic depth to width ratio – in other words being deep chested – has also been repeatedly linked to bloat.

But it’s not quite as simple as a correlation between pounds on the scale and increased risk.

An increased risk of canine bloat has also been linked to

Which Breeds Are Most at Risk?

Across the purebred dog population as a whole, a 2010 survey of over 15,000 dog deaths attributed just under 2.5% of them to bloat.

But the following breeds are disproportionately represented among canine bloat casualties:

Unsurprisingly, these are among the largest dog breeds, and those with the deepest chests.

But that might not be all there is to it…

Recent Research into the Risk of Developing Canine Bloat

A large, deep chested, overweight or older dog is easy to identify and recognize as being at risk of bloat.

But at the time of writing in 2019, some of the most interesting research into bloat has begun to examine risk factors which we can’t see.

American researchers have found that a significant number of dogs with a history of bloat have some interesting genes in common.

What do these Genes Do?

These genes change how the dogs’ immune systems respond to the presence of bacteria in the gut – letting some kinds flourish which would usually be suppressed.

As a result, the dogs had significantly more types of bacteria in their gut, including some pretty unusual strains.

And it’s partly the action of those bacteria on the food dogs eat that generates the sudden release of gas within the stomach and causes canine bloat.

In this way, a genetic vulnerability to bloat could be passed down from one generation to the next, and spread within a purebred population.

Protecting Your Dog From Canine Bloat

So we’ve seen that a lot of factors can increase the risk of canine bloat. Some of them, like the genes which might have a role to play, aren’t easy to overcome yet.

And finally, it’s impossible to measure or quantify, but this study noted a significant decrease in cases of bloat among happy dogs. So keep showing your pup lots of love!

For at risk breeds, some dog owners might also consider preventative surgery.

This procedure, called gastropexy, secures the stomach to the wall of the abdomen with stitches.

It is easier, and safer, to perform in young, healthy dogs than dogs already experiencing bloat.

However there are still the usual risks associated with surgery, and the cost.

Your vet will be able to discuss the merits and drawbacks of preventative surgery for your dog if you are worried about them.

Your Dog and Bloat

Large dogs, old dogs, and dogs with deep chests are the most prone to canine bloat.

Dog owners should familiarize themselves with the signs of canine bloat. It’s important to seek immediate veterinary attention if you spot any of them.

Luckily, there are lots of steps we can take to protect dogs from bloat.

And as our understanding of the causes and risk factors for bloat continues to improve, there will be even more we can do to stop our dogs falling victim to it.

Has Your Dog Experienced Bloat?

If you’ve ever rushed to the vet to save a dog with canine bloat, please let us know how you got on.

Did your vet give you any advice we haven’t covered for protecting them in future?