You are here: Home / Breeds / Mix / Teacup Pomeranian: Everything You Need to Know About a Truly Tiny Dog 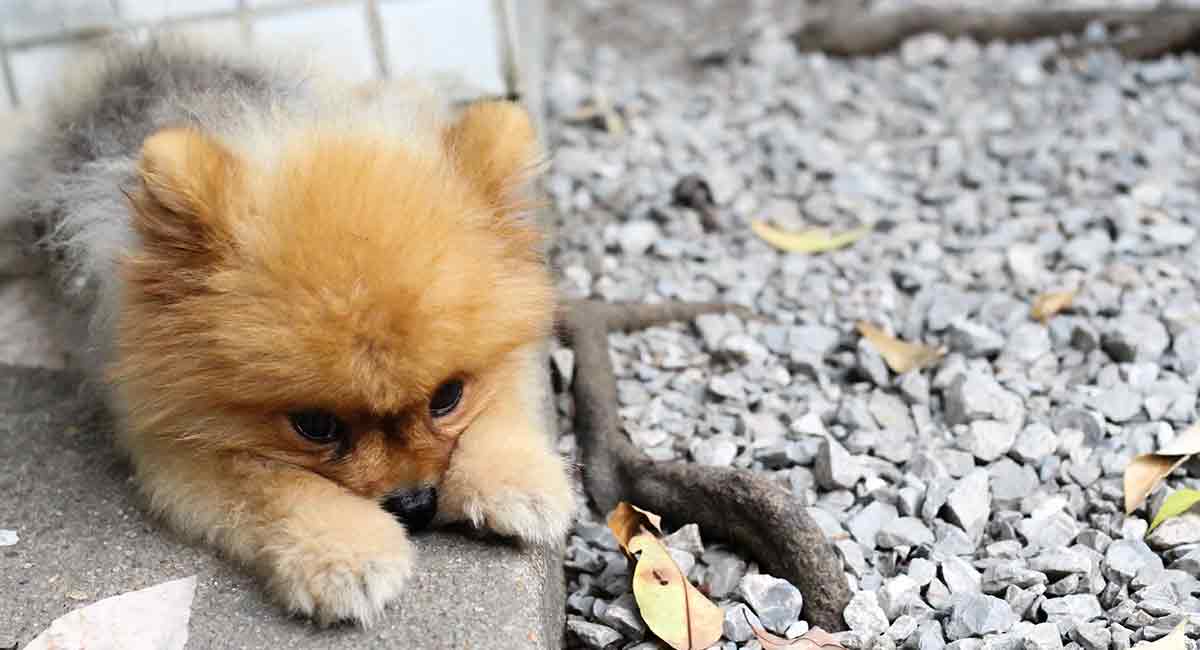 The teacup Pomeranian aims to pack those classic Pom looks and personality into an even smaller package.

Small in size to begin with, these bouncy, chatty, companionable dogs are loved for their lively personalities and cute-as-a-button looks.

But for some, a 4.4 pound dog is not quite small enough.

Thus, the introduction of the Teacup Pomeranian.

Let’s dive a little deeper and find out more about the implications of breeding a dog this small.

The Appeal of the Teacup Pomeranian

You might think that the miniaturization of dogs is a recent phenomenon, driven by fashion.

Interestingly, intentionally breeding dogs to be smaller started when dogs were first domesticated.

According to one recent study, it seems dogs started to be bred smaller as settlements became more densely populated and working dogs moved indoors.

A smaller dog is much easier to house and feed.

So initially, the case of the shrinking dog may have been driven by practicality.

And, as we live in close quarters, it does become more practical to have a dog that fits our living space appropriately.

However, more than just practicality seems to be involved.

Humans are wired to feel protective and warm toward “baby” things.

So, it is natural that a dog that stays puppy size will pull at the heart strings of many.

And for some, the smaller the dog, the stronger the urge to protect, cuddle and coo over it.

Of course, this isn’t a bad thing in itself.

Later in this article, we will try and identify when this urge needs to be balanced with concerns for the animal’s welfare.

Where Do Teacup Pomeranians Come From?

There are three ways to miniaturize a dog, and each method comes with some concerns.

Let’s have a look at these three methods in more detail.

One way to make a dog smaller is to breed it with another, smaller breed.

Of course, the result of this is not a purebred; it’s a crossbreed dog.

Of all the ways to make a dog smaller, this is perhaps the least risky.

By bringing outside genes into the mix, the problems often associated with purebred dogs can be avoided.

However, when miniaturizing a dog, care still needs to be taken that the tiny size of the organs and bones in the resulting puppies do not become a problem in themselves.

Care also needs to be taken so that the birth does not become dangerous for the mother dog if she has been bred with a dog much larger than her.

In the case of making the itsy-bitsy Pomeranian even smaller, the fact remains that it is one of the smallest breeds out there already.

There really aren’t many breeds that would make this diminutive dog any smaller.

Here are a couple of small Pomeranian mixes.

A cross of the Pomeranian and the Chihuahua, these little pooches are full of personality just like their parent breeds.

Similar to the Pomeranian, they look like fluffy little foxes, perhaps with a slightly dome-shaped head like the Chihuahua.

These little fellas are the result of crossing a Brussels Griffon and a Pomeranian.

Aside from being small, the Brusselranian may end up with the unique Chewbacca-like face of the Brussels Griffon.

Like many smaller dog breeds, both breeds were meant to be companion dogs and love spending time with their family.

They are also full of energy.

This is a cross between the Chinese Crested and the Pomeranian.

It’s an odd combination considering one breed has loads of fur, and the other has hardly any.

As you can imagine, this can lead to any manner of hairstyles in the resulting puppies.

But one thing is guaranteed—they will be small.

Being the result of two fairly outgoing breeds, they will also be keen to spend plenty of time with their human families.

Another way dogs are miniaturized is through the deliberate introduction of dwarfism.

Dwarfism not only results in shortened limbs but other health problems as well.

There are different syndromes associated with dwarfism.

The degree to which the bones are affected can vary.

Dwarfism can also result from problems in the pituitary gland.

In these cases of dwarfism, growth can be stunted while the dog remains in proportion.

This tends to affect some breeds more than others.

Dogs that happen to be born with dwarfism still deserve to live out full and enriching lives, and can do so with proper care.

However, the ethics of deliberately breeding dogs with such conditions is problematic to say the least.

Another common way dogs are bred to be smaller is to repeatedly breed from the runt of the litter.

Any responsible breeder would be careful to check that the smaller stature is not the result of some other health problem or malnourishment.

The runt of the litter often does not have the strongest constitution, so breeding runts with runts could easily result in sickly puppies.

Sadly, many breeders of teacup Pomeranian puppies do not seem too concerned about the health of puppies resulting from repeatedly breeding from runts.

Seeing the demand for teacup-sized dogs is high, a large profit can be made.

Ultimately the health of the dogs suffer.

Is a Teacup Pomeranian Right for Me?

As we have seen, there are some serious question marks regarding the health of such tiny dogs.

It is most likely that a Teacup Pomeranian is the result of runts being bred with runts.

As such, your little bundle of fluff might be facing some very real health problems and extra needs throughout his life.

For instance, these tiny dog breeds often have loads of energy.

However, their little teacup Pomeranian bodies are often too fragile to cope with too much jumping and rumbling.

Similarly, their small organs work at a sped-up rate. They will need to eat and urinate more often.

As these little fellas really need to live indoors, you will have to think carefully about toileting arrangements.

You will also need to be around enough throughout the day to feed them small, regular meals.

Compared to other dogs that may be more low maintenance, seriously consider whether you would be able to care for one of these fragile little balls of fluff appropriately.

A lot of the reasons teacup dogs exist are because certain breeders realized there was a market for such small dogs and wanted to cash in, most often at the expense of the dog’s health.

So, when looking for a breeder, please be extra cautious.

Make sure you visit the place the dog has been raised, ask to meet the parents and ask lots of questions about their health.

Inquire about the methods they used to produce such a teeny puppy.

If you feel at all uncomfortable with the answers, then perhaps it is a good idea to rethink owning one.

Any dog produced by a puppy mill has not had a fair start in life.

Particularly in the case of teacup breeds, their health is likely to be severely compromised.

The truth is, toy varieties are already prone to health problems.

So, teacup puppies are likely to suffer even more.

If you love small dogs, the plain old Pomeranian is small and just a little more robust than a Teacup Pomeranian.

But if you’re really persistent about a teacup pup, try a rescue shelter.

A dog rescue shelter dedicated to the Pomeranian is probably the best place to start your search.

Keep in mind that Teacup Pomeranians may be at these rescue shelters because they have suffered health or behavioral issues that their previous owner didn’t expect, wouldn’t tolerate or couldn’t afford.

If you want to rescue one of these little dogs, make sure you have the time, money and patience needed to care for a pooch that might have extra baggage.