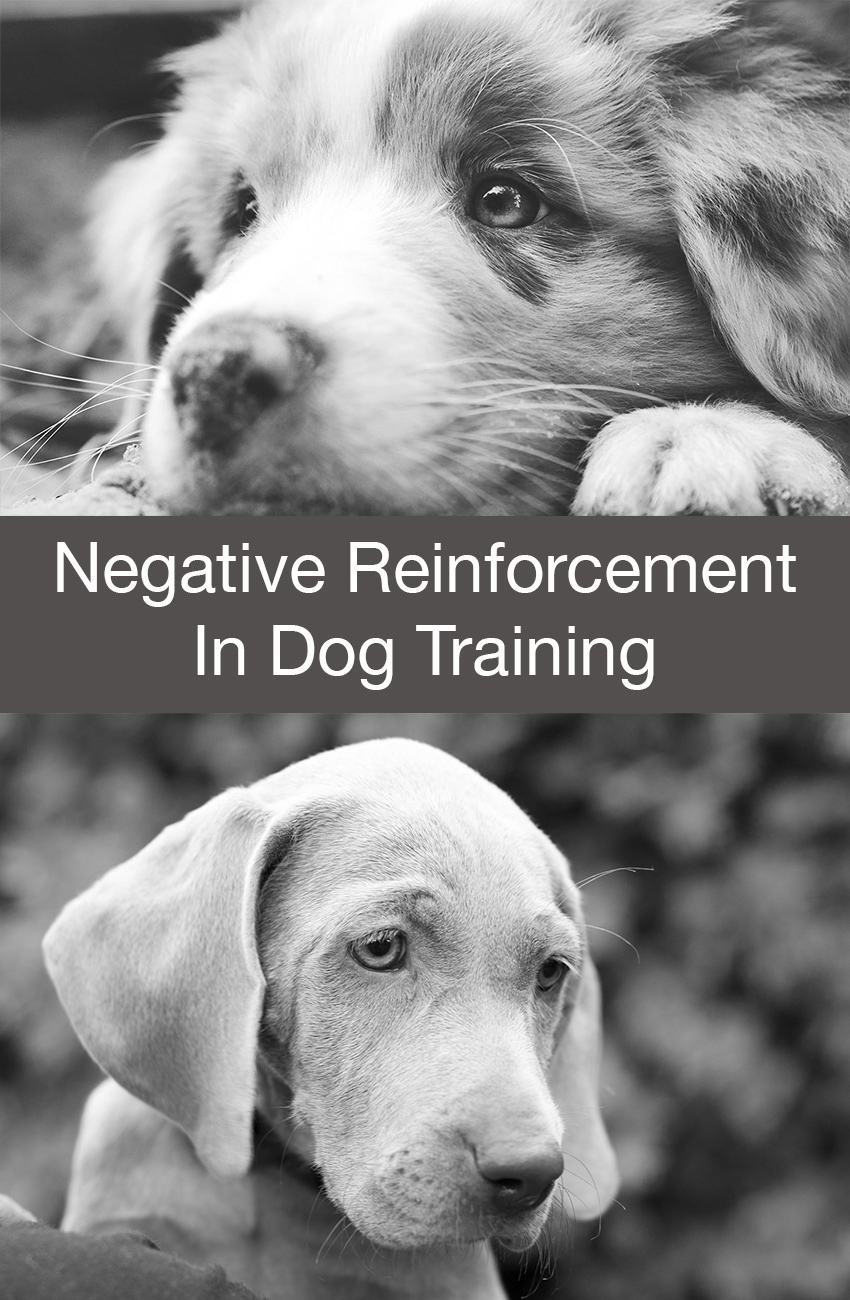 It is very common for people to get in a muddle with some aspects of the terminology that surrounds behavioral science when it comes to dog training.

Most people nowadays do understand what Positive Reinforcement is.

They understand that this means teaching dogs the right thing to do by reinforcing good behavior with rewards.

However, many people still misunderstand what Negative Reinforcement is.

This is not the case.

The confusion usually arises because we think of ‘negative’ as meaning bad or unpleasant, and ‘positive’ as being good or happy.

However, the language of behavior comes from behavioral science.

And in behavioral science and in activities derived from it such as dog training, positive and negative are mathematical terms which refer to addition and subtraction

It’s all to do with maths

To understand what Negative Reinforcement really is, we need to break it up into the two halves.

The first half – NEGATIVE – refers to the events that are taking place around the dog – usually as the result of an action taken by the trainer.

The second half  – REINFORCEMENT – refers to the effect of this event on the dog.

And how the dog is affected, depends entirely on how the dog perceives or experiences that event.

This will become clear I promise!

I said earlier that negative and positive in dog training are mathematical terms.

These terms refer to what is happening around the dog, the consequences of the dogs behavior. Consequences that the dog’s trainer will attempt to control.

Dog trainers may provide consequences to their dog’s behavior by adding something.  It doesn’t have to be something the trainer does, it could be something he says, or something he allows the dog to do.

So for example a stern “NO”  or “AH AH” would be something added by the trainer. It wasn’t there before.

A smack or a poke from the trainer would also be something added.

So would a treat or a game with a ball.   This are all consequences deliberately added to the dog’s experience of life.  They are all therefore, in behavioral terms POSITIVE  – even though some of them are clearly unpleasant.

Sometimes dog trainers subtract or take away, something from the dog as a consequence of his behavior.

A trainer can also take away something really unpleasant, painful or scary.

All of these consequences are NEGATIVE even though some of them are good (like the removal of pain for example) and some are bad – from the dog’s point of view.  But it is not their effect that we are concerned with when we use the word NEGATIVE.

Negative means something taken away

So to recap.  The word negative has nothing whatever to do with the final effect on the dog’s behavior.  It doesn’t mean something that is unpleasant for the dog and it doesn’t mean teaching the dog not to do things.

It simply means that the trainer has removed something that the dog was experiencing.

Now to understand the whole term Negative Reinforcement  we need to look at the second part of the term.

The part concerned with how the dog is affected by what happened around him.  We need to understand exactly what is meant by the use of the word reinforcement.

What does reinforcement mean?

Reinforcement is about the effect of what happened to the dog.  Crucially it is about how the dog perceived what just happened.

Reinforcement is anything that increases a dog’s behavior, or makes it more likely to be repeated in the future.

Examples of thing that can be used for reinforcement

To increase or strengthen a dogs behavior we need to apply reinforcement.  Which means being very clear about what dogs in general and our dog in particular, finds reinforcing.

Obviously this will include treats and games, opportunities to play with his friends and so on.

But importantly, reinforcement also includes the cessation of something unpleasant. Including fear, discomfort, or pain.

So this is Negative Reinforcement

So Negative Reinforcement is where a handler or dog trainer takes away something and by doing so increases or strengthens the behavior that he is training.

The unpleasant fact that we now need to address, is how this process is used.

Dog trainers don’t just wait around for something unpleasant to happen to their dogs, then grab the opportunity to ‘switch off’ the unpleasant thing in order to reinforce whatever their dog happens to be doing at the time.

This would be a completely haphazard and ineffective strategy.

Therefore, in order to ‘remove’ something unpleasant under controlled conditions, the trainer has to apply the unpleasant thing to the dog in the first place.

You may find it hard to believe that anyone would do this to a dog, but in fact, this technique has been used extensively in retriever training in the USA now for several decades.

Trainers apply pain to the dog in the form of an ear pinch or toe hitch, and end the application of pain when the dog complies with their requirements.

I’m not going to go into the rights and wrongs of this, here in this article, but this is a very clear example of negative reinforcement in action.

Negative Reinforcement is not about correcting dogs or stopping bad behavior.

The traditional dog training techniques used for that purpose all embrace the principles of Positive Punishment (which need not necessarily be harsh) which means ‘something added, that diminishes behavior.

Negative Reinforcement is about turning off something unpleasant, and its most common use in dog training is in the process known as Force Fetch for retrievers as described above.

The key point is that

A word about Punishment

And if you are interested in learning more about the language and principles of dog training, drop in to my forum for a chat!