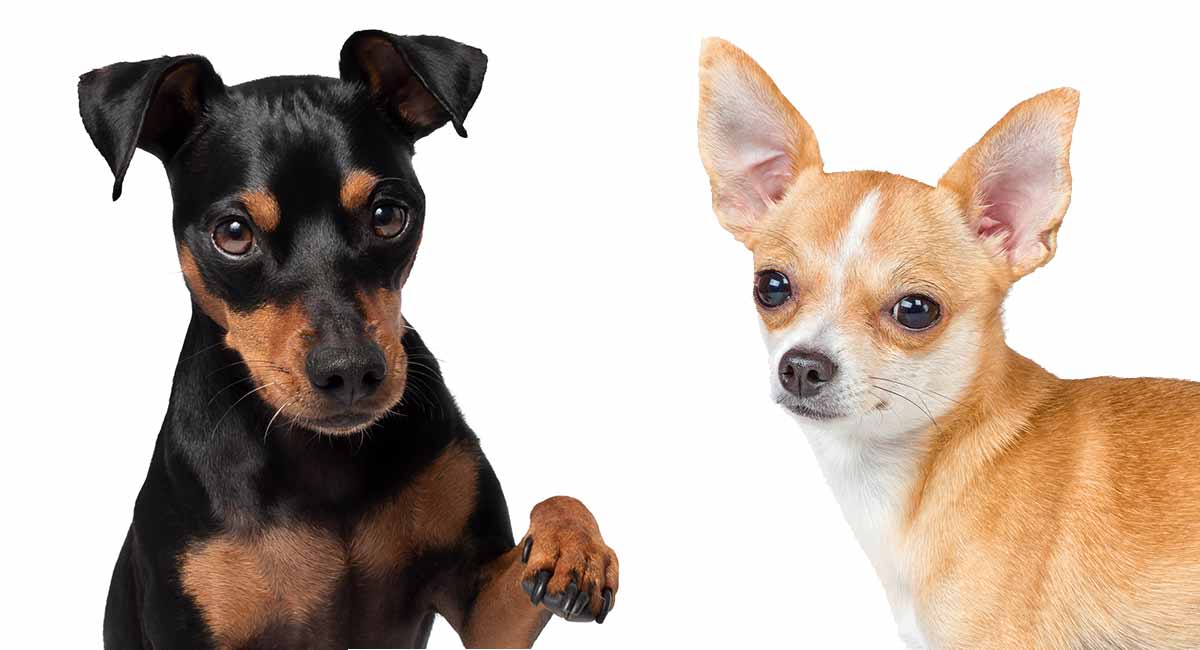 Unfortunately, both parent breeds can be prone to some unfortunate health issues. However, some people contend that by mixing two purebred dogs, you may be able to avoid some of the health risks associated with the parent breeds.

Let’s take a closer look to see if this mix will suit your home.

Our readers’ most popular and frequently asked questions about the Chipin dog.

History and original purpose of the Miniature Pinscher Chihuahua mix

The fearless, fun Miniature Pinscher and the feisty, charming Chihuahua are the parents of this hybrid dog.

Like many mixed breeds, their exact history is a bit cloudy, but they’ve likely been in existence for the last two decades or so.

Purebred purists object to mixed breeding on the basis that it taints the bloodline and makes the outcome unpredictable. However, mixed breed fans claim purebred dogs have a higher risk of health problems due to inbreeding.

History of the Miniature Pinscher

The actual origins of the Min Pin cannot be pinned down.

One thing is certain: despite the similar name, this is not a much smaller version of the Doberman Pinscher.

The Miniature Pinscher is believed to have originated in Germany several hundred years ago as a barnyard ratter.

Breed historians consider them to be a cross between the Dachshund and the Italian Greyhound.

History of the Chihuahua

The diminutive Chihuahua is the world’s smallest dog breed.

Their ancestry appears to date back to pre-Columbian times.

The Aztecs were said to have refined the larger, heavier Techichi, an ancestor of the Chihuahua, into a smaller, lighter dog.

Americans visiting Mexico in the mid-1800s became fascinated with these tiny dogs found in the State of Chihuahua and brought them home.

This mixed breed’s appearance can vary depending upon which parent he takes after.

Even within the same litter, one puppy can look more like the Miniature Pinscher, while his siblings take after the Chihuahua.

One thing is certain: he will definitely be cute.

His short, smooth coat will come in many colors, but most likely will be black and tan.

Other colors include: cream, chocolate, golden black, white, and tan.

If the Chihuahua parent was long-haired, the Chipin mix may have a longer coat as a result.

The head will be small and round. In addition, he will have a tiny pointed muzzle, dark eyes, and huge ears.

Small and compact, the Miniature Pinscher Chihuahua mix will usually weigh between 5 and 11 pounds.

Height will range from 7 to 12 inches.

As with appearance, temperament can vary with mixed breeds. The Miniature Pinscher is known to be intelligent, independent, and energetic, while the Chihuahua is loyal, sassy, and entertaining.

Both of these dogs think they’re the center of the universe and will lap up attention!

Despite their size, Chihuahuas can be aggressive. The Miniature Pinscher can also be antagonistic if not socialized properly.

Each of these breeds is protective of those they love and as a result they make excellent watchdogs. You can expect your Mini Pinscher Chihuahua mix to want to be around people all of the time.

Both parent breeds can suffer from separation anxiety and get bored easily if left alone. This can lead to destructive behavior. They will likely be suspicious of strangers and must be socialized early, especially if other pets are in the home.

The Mini Pinscher Chihuahua Mix is known to have a stubborn streak. Consistency is key.

This is a dog who can become distracted. Patience, consistency, and plenty of praise and treats are required for successful training.

It’s not uncommon for potty training to be a problem for small dogs, and the Chihuahua and Mini Pinscher are no exception.

Once poor toilet routines have been established it’s very difficult to retrain. Establishing a schedule and sticking with it early on is essential.

Crate training is an excellent tool when you’re not at home.

Dogs will avoid soiling their own space if possible.

This means exposing them to a wide variety of people, places, and situations as soon as possible.

It’s very important that a small dog like the Chipin gets accustomed to being handled so they don’t become aggressive and bite.

While the Chihuahua can usually get enough exercise trotting around a small space and going for short, slow walks, the Miniature Pinscher is a very active and athletic dog.

This is not only to keep him fit and trim, but also to avoid behavioral problems like digging, chewing, and excessive barking.

Being small is a health advantage for dogs. However, being too tiny can create some special problems.

The Miniature Pinscher and Chihuahua share quite a few health concerns that could be passed on.

Eye problems, some of which may cause blindness, can be a significant cause for concern for both parent breeds.

The Chihuahua is especially at risk for a host of eye diseases including glaucoma, cataracts, corneal ulcer, lens luxation, and cherry eye.

Heart defects are a leading cause of death among older Miniature Pinschers.

Patellar luxation, in which the kneecap pops out of place, is a common concern for both the Miniature Pinscher and the Chihuahua.

Other health problems found in the Mini Pin include Legg-Calve-Perthes disease. This involves disintegration of the hip joint, and hyperthyroidism.

Choosing your dog from a breeder who health screens their breeding stock for genetic problems is the best way to reduce health risks for a puppy.

You can find a comprehensive list of tests available on the Dog Breed Health website for the Miniature Pinscher and the Chihuahua.

The Miniature Pinscher has a lifespan of 12 to 16 years and the Chihuahua 14 to 16 years.

Neither the Miniature Pinscher nor the Chihuahua requires much in the way of grooming due to their short dense coats.

Brushing once or twice a week should suffice.

Shampoo with a mild dog shampoo as needed. In additions, you should check their ears to remove excess wax or debris.

Nails should be trimmed regularly so they don’t get too long and daily teeth brushing is also recommended.

Chihuahuas have a tendency to become overweight so watch the calorie consumption, including treats.

If you have any concerns about your dog’s weight, check with your vet.

The Miniature Pinscher Chihuahua mix is not the best choice for families with young children. You can hurt these small dogs quite easily if you drop them.

Conversely, an inherent prey drive means they’ll chase after anything that runs, including children and other pets. Any interaction with young children should always be supervised.

Loyal to those they love, they can be protective of their territory, including their food and toys.

The lively and sociable Miniature Pinscher Chihuahua mix will not like to be left alone.

These dogs are ideally suited to a retired couple or family where someone is home throughout the day.

Have you considered the advantages of adopting a dog?

Busy families might find it easier to adjust to an older dog than to an energetic puppy. This is particularly true for first-time dog owners.

There’s a good chance a rescue dog will be house-trained.

Getting a dog from a shelter will almost always be less expensive. In addition, they will typically have their shots as well.

We’ve put together a list of rescue specific to each parent breed towards the end of this article. You can jump to that list by clicking here.

In the last two decades, the popularity of mixed breed dogs has soared. They can look different than any dog you’ve seen before and have funky names like Chiweenie and Bo-Jack.

Genetic diversity may also lower the chances of passing on a particular health problem if only one parent is a carrier.

If your heart is set on a Miniature Pinscher Chihuahua mix puppy, make sure you seek out a good breeder.

Make sure to see where the puppies were living and the puppies’ parents. This is the best way to gauge how they’ve been cared for.

Any good breeder will be happy to answer any questions you have about their dogs. Be sure to see where the puppies were living and the puppies’ parents. This is the best way to gauge how they’ve been cared for.

Obtaining health certificates for both puppy’s parents is crucial.

Always avoid buying a puppy from a pet store or a puppy mill as these dogs often have an increased risk for serious health issues.

When you’re choosing a dog breed that’s this small, it’s a good idea to select a puppy who’s slightly larger than average.

They’ll be less fragile and as a result, should have a better chance of having a long and healthy life.

Check out this guide, which has everything you need to know to find a puppy.

These products and accessories, which are designed for the Chihuahua, can be helpful for a Miniature Pinscher Chihuahua mix as well.

Choosing the best Chihuahua shampoo can help to avoid dry skin and other skin problems.

Small dogs like the Chipin dog need to be kept warm in cold climates.

Check out these stylish clothes to keep your puppy warm during the winter.

Adjustable dog harnesses are designed for a Chihuahua’s small size and as a result will remove pressure from the delicate tracheal area.

Pros And Cons of Getting A Mini Pinscher Chihuahua mix

Still having trouble deciding whether this is the right pet for you?

Here are some handy pros and cons!

As a result of their strong personalities and delicate structures, these dogs are not well-suited for homes with kids.

If left alone too much they can suffer separation anxiety and as a result, become destructive.

Their small size means you need to be mindful of avoiding accidents and injuries, both at home and while out on walks.

They can be difficult to house-train. In addition, they can become aggressive if not socialized properly.

In terms of grooming and exercise requirements, the Chipin is quite low maintenance.

They’ll be an alert watchdog, but typically don’t bark as much as the Chihuahua.

The Chipin has a friendly, playful personality and therefore can be quite entertaining!

We couldn’t find any rescue centers specifically for the Chipin. As a result, this is a growing list of Miniature Pinscher and Chihuahua rescue organizations.

If you run a similar organization and would like us to add you to the list, please post your organization’s details in the comments box below.

Do you know of any other great rescues we’re missing? Let us know in the comments.

Is a Miniature Pinscher Chihuahua mix right for me?

To sum up, this is a mixed breed that will suit some people perfectly but others not so well at all. Are you able to give a small dog plenty of love and attention?

If you’re away from home a lot or have children in the house, you would probably do better with a different dog breed.

The Chipin dog is a mixed breed. Therefore, you should bear in mind that their temperament can be unpredictable.

Perhaps you’re a fan of both the Miniature Pinscher and the Chihuahua. In that case, it won’t matter too much which parent the pup favors.