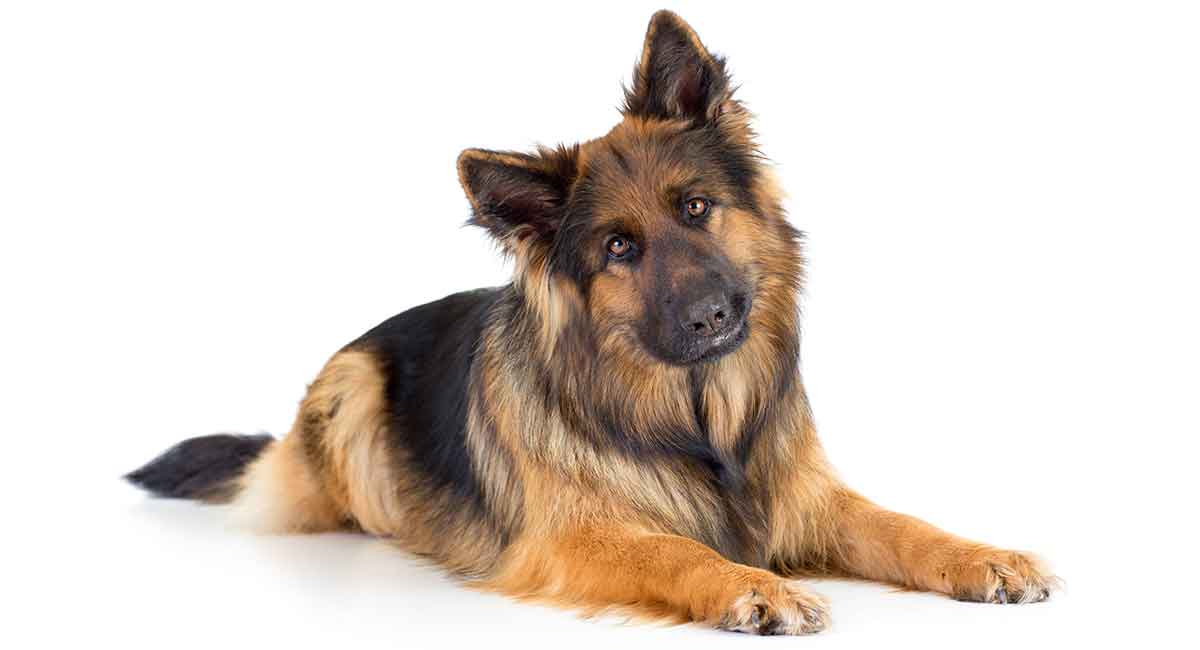 But, what are the main differences between a long haired German Shepherd, and other types?

In this article, we’ll take a look at the increased grooming requirements of having a long haired dog and share some tips and advice on the best way to groom them.

We’ll also explore if there are any differences in the health or temperament between long and short haired German Shepherds.

If you want to remind yourself about the German Shepherd breed in general, our full breed review can be found here.

The breed standard specifies that the “ideal” German Shepherd has a double coat of medium length.

But German Shepherds that are not destined for the show ring will often have coats much shorter, or longer, than that ideal.

The majority of German Shepherds have a double coat – meaning that underneath the tough and dense outer coat, is a layer of much softer fur.

Some German Shepherds, of both the long and short haired varieties, have a single coat only.

So let’s take a look at grooming next.

A long haired dog of any breed is going to require more frequent grooming than their short haired counterparts.

But due to their large size, grooming a long haired German Shepherd can be a serious undertaking.

You should be prepared to give your long haired German Shepherd a quick grooming session between three to four times a week.

Every fortnight, set aside a little more time to give their coats a really good going over.

And when it comes to shedding season, you may need to spend more time grooming, in an attempt to help your dog shed their seasonal coat.

Remember, the more fur you remove when grooming, the less there will be around your house!

Long haired German Shepherds shouldn’t need bathing too regularly. So, as long as they haven’t rolled in something nasty, they should only have a bath when strictly necessary.

You might be tempted to think that it’s a good idea to give your long haired German Shepherd the occasional haircut.
But, this isn’t a good idea, for a variety of reasons.

While some dog breeds have fur or hair that’s suitable for clipping, any dog which has a double coat doesn’t fall into this category.

And as we’ve already discussed, the long haired German Shepherd has a thick, lustrous double coat.

This coat serves to both keep your dog warm when it’s cold but also protects them from the harsh sun, and UV rays, in the summer.

Removing this coat leaves your dog unable to regulate their body temperature effectively.

Of course, there may be times when a long haired German Shepherd needs a haircut. But these are certainly the exception to the rule.

A rescue dog may have extreme matting and need shaving in order to remove these painful knots of hair.

If a dog needs a surgical procedure, then of course shaving the affected area will be necessary.

But in the majority of cases, it’s best to leave this beautiful dog’s coat as nature intended.

As one of the most popular breeds in the US, German Shepherds are known for their fierce intelligence, and protective instincts.

They’re highly trainable, leading them to be a popular choice for working dogs. They’re often used as police dogs, search and rescue, service dogs, and many more jobs where a dedicated and intelligent breed is required.

German Shepherds are very loyal and need socialization as young puppies to ensure they are well mannered when meeting strangers.

As an active breed, they require plenty of exercise. Plus, remember to combine physical exercise with mental stimulation as both are equally important to the German Shepherd.

It’s important to consider these while making the decision whether or not to buy a long haired German Shepherd.

Any reputable breeder will be more than happy to talk you through the health conditions that are common in the German Shepherd, but here’s a brief summary.

This breed is known to suffer from hip and elbow dysplasia. Breeding dogs should have been given a score for this. The higher the score the better. So when looking at puppies, ask to see the scores of both parent dogs.

Many German Shepherds have now been bred to have an extreme slope to their backs. This can have a negative impact on their health and welfare.

The most common health issues which affect German Shepherds are:

When searching for a long haired German Shepherd puppy, it’s best to spend some time visiting local breeders. Ask to see both parent dogs, and see what sort of temperaments they have.

Puppies from working parents may not be suited to a family home, so be sure to discuss this.

This means that short haired German Shepherds can also carry the gene, without expressing it in their coats.

Some breeders consider the long hair of some German Shepherds to be a “genetic fault”.

This is probably because the breed standard mentions a medium length coat.

We can’t find any scientific evidence to suggest the long haired gene could be labeled as faulty.

So perhaps, with respect to German Shepherds being specifically bred for the show ring, it would be more accurate to call it undesirable.

Despite this, some show dog breeders may still decide to breed two dogs together, which both have the recessive gene for long hair.Some of the resulting puppies may have long haired coats.

Either way, there are plenty of long haired German Shepherd puppies out there awaiting their forever home.

But how much will one cost?

At the time of publication, we looked at the prices of both short and long haired German Shepherd puppies.

So, while the starting price of both types are similar, the top price for a long haired German Shepherd puppy is much more reasonable.

If you’re bringing a long haired German Shepherd puppy home soon, you may first want to think about assembling a grooming kit.

Selecting the best products for your dog’s specific coat will make your job much easier.

A self-cleaning slicker brush is perfect for using all year round on your long haired German Shepherd’s coat. The thin and flexible metal bristles are designed to reach down into your dog’s double coat to remove any loose hair. The self-cleaning feature of this brush is a great timesaver, meaning you can quickly remove any accumulated hair with the press of a button.

A 2-sided dematting comb can help to detangle stubborn tangles without pulling on your dog’s coat. The rounded ends make this brush suitable for sensitive skin.

Every few months, you might choose to give your long haired German Shepherd a bath. Using a hypoallergenic pet wash is a good idea to help protect sensitive skin. Using a soap-free formula which includes conditioner will help keep your dog’s coat in great condition.

When it comes to shedding season for your long haired German Shepherd, a deshedding tool is highly recommended. These tools are designed to remove the shedding undercoat, without damaging the topcoat

Another essential tool you’ll probably be considering if you have a long haired German Shepherd is a vacuum which is specifically designed for dealing with pet hair.

No matter how effective your grooming regime, you’ll likely still end up with dog hairs around your house. Selecting a vacuum which can remove these hairs from both floors and furniture is a great investment.

If you’re not quite sure where to start with grooming your German Shepherd dog, there are lots of videos online that can help.

Take a look at some videos online to get a better visual idea of how to use the tools we spoke about above.

Long haired German Shepherds are stunning dogs.
While they might not be favored in the show ring, they have many fans elsewhere.

Their temperament and health is the same as that of a short haired German Shepherd. However, their long coat does require some fairly regular grooming session to keep it in check.

Once you’ve got into a routine with your long haired dog, it will soon become second nature.

If you’ve got a long haired German Shepherd, or have any grooming tips you’d like to share, please leave us a message in the comments section. We’d love to hear from you!