You are here: Home / Puppy Health & Care / What Do Ticks Look Like & How To Deal With Them 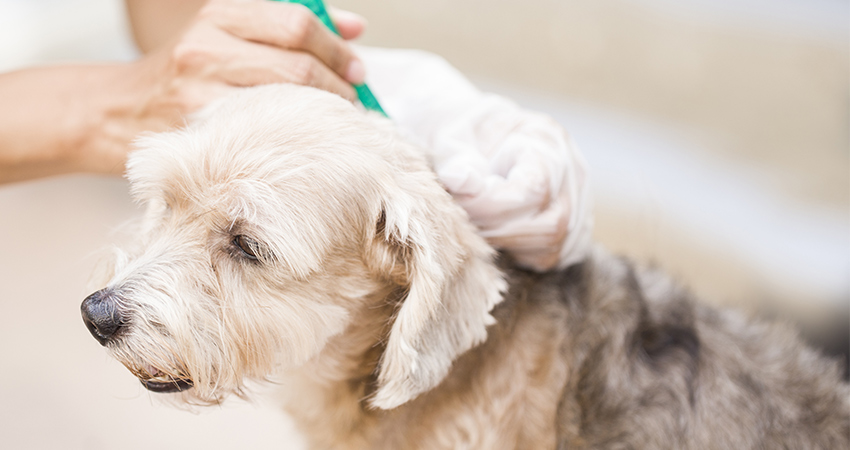 What do ticks look like? We bring you the ultimate guide to dog tick identification, illnesses, treatment and prevention!

Not so long ago, ticks on dogs were associated with living in rural areas and spending lots of time outdoors playing in long grass.

But these days urban tick populations are much higher, and finding the first tick on your dog is a rite of passage for most dog owners.

In this article we’ll make sure you have everything you need to know about avoiding tick bites, identifying different types of ticks, tick removal, and recognizing the symptoms of tick borne diseases.

What is a tick?

Ticks are arachnids – cousins of spiders and mites.

They are ectoparasites, which means they live on the outside of their host’s body, and they have specially adapted mouth parts which they use to feed off their host animal’s blood. 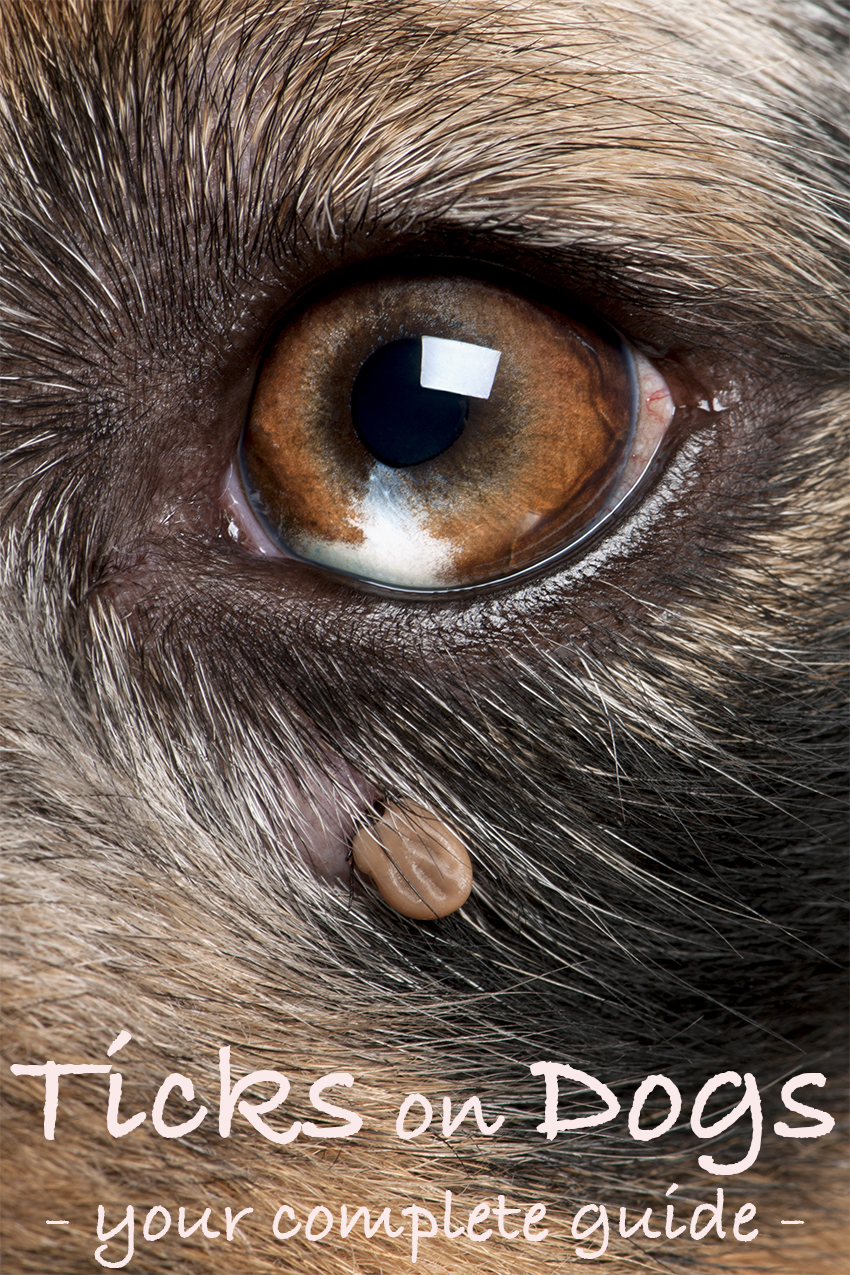 Like most small, ugly parasites, ticks are consummate survivors: they have been around for at least 65 million years.

There are many species of tick, but they fall broadly into two types: hard and soft. Soft ticks are uncommon on dogs, so we’re going to focus on hard ticks in this article.

Hard ticks are not so called for their tough-guy attitude, but for the shield-like plate at the front of the their body, called a scutum.

Ticks can be found all over the world, and different regions have their own indigenous species.

According to VCA Hospitals, the most common ticks found on dogs in North America are:

Tick activity peaks and dips with the seasons.

They are most active in summer, and usually go dormant over winter. But they might still wake up on a mild winter day if the ground temperature is above 45°F/7°C.

Obviously this means your own tick season will depend on where you live, and your local climate.

Identifying ticks is, if not fun, at least fairly easy once they reach adult size.

Before a feed, ticks are small flat ovals, and their eight legs are easily visible.

Their scutum covers most of their body, and different species can identified their colors and patterns.

We’ll compare some pictures of ticks in a minute.

How big is a tick?

Ticks take roughly a year on average to reach their adult size.

Depending how old they are when you find them they can be anything from one or two, to ten millimeters across.

Once ticks attach to a host, they feed for several days or even weeks, and increase they body size many times over.

Ticks which have been feeding for more than a couple of days take on the appearance of pale brown or gray pebbles.

By this point the legs and mouth parts become completely hidden underneath them, and the scutum is just a dark speck at one end of their body.

A female tick which has the opportunity to feed for a week or more can get as big as a grape!

Now let’s take a closer look at those four types of tick bug you’re most likely to encounter.

The males are mottled all over, and the females have denser off-white markings on their scutum only.

American dog ticks don’t like tree cover – they typically wait in fields, open scrubland, and alongside tracks for a host to come along.

Female lone star ticks are distinctive little critters, and probably the easiest of any kind to identify. 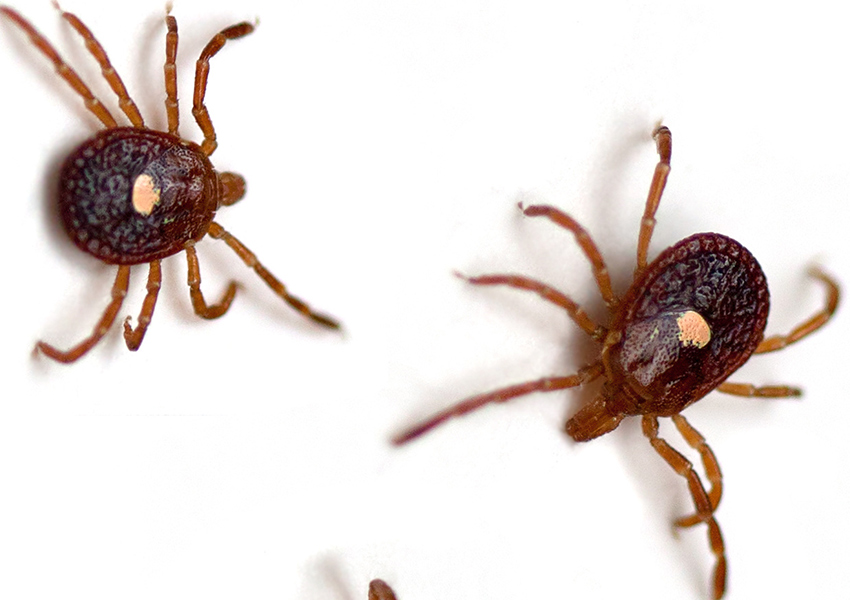 They are bright coppery brown, with a vivid white dot in the center of their back.

The males are decidedly more dull and ambiguous looking. We’ll look at some images of ticks soon so you see what I mean.

Only female adult deer ticks bite. They have a characteristic dark brown scutum set against an orange body.

As their name suggests, deer ticks prefer to live on deer species, so you are most likely to encounter them in deer habitats. They are particularly fond of deciduous woodland.

Both sexes of the brown dog tick are a uniform shade of brown all over.

So far, so boring, but brown dog ticks are the only type of tick which prefer to complete their entire life cycle indoors. 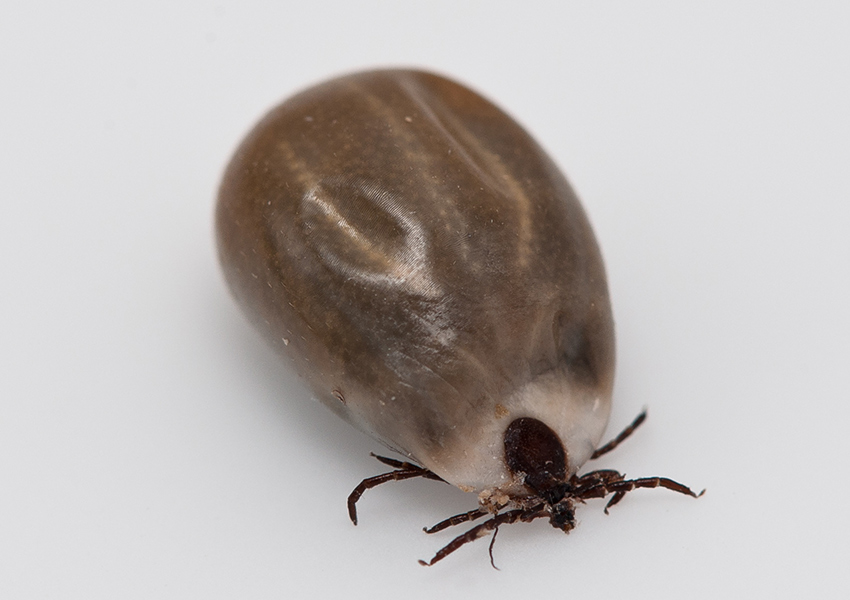 For this reason brown dog ticks are found in all over the United States, wherever humans live.

If you find a tick on your dog in winter, or without going into any likely tick habitats, it’s most likely to be a brown dog tick.

Right, let’s compare some photos of ticks in a handy table:

Checking for ticks in dogs

Ticks inject a cocktail of chemicals with their saliva when they bite, to anesthetize the area and prevent the immune system launching an inflammatory response.

Nonetheless, the place where the tick has embedded itself may give away its whereabouts by becoming itchy and inflamed.

It’s wise to check your dog for ticks everyday during tick season, even if they haven’t been out in any tick habitats that day.

There are two reasons for this:

Pay special attention to the places on your dog where their fur is sparser – the paws, armpits, groin, ears, and mouth.

Look with your eyes, and run your fingers through their coat to feel for ticks buried among the hairs.

An embedded tick will feel like a little hard seed or stone, stuck against your dog’s skin.

There are a lot of old wives’ remedies for removing ticks, but most of them are actually pretty terrible ideas.

Way back in 1985, Glen Needham at Ohio State University tested removing ticks by smothering them petroleum jelly or fingernail polish, dousing them with alcohol, or burning them with a hot match, and found that they were all hopelessly unsuccessful techniques for tick removal.

He also tested removing ticks by every pulling them in every possible direction with tweezers, and found that grasping the tick as close to the skin as possible and pulling steadily straight up was a consistently effective way of removing ticks.

How to remove ticks

The good news is that the safest, most effective way to remove ticks is also the easiest way. 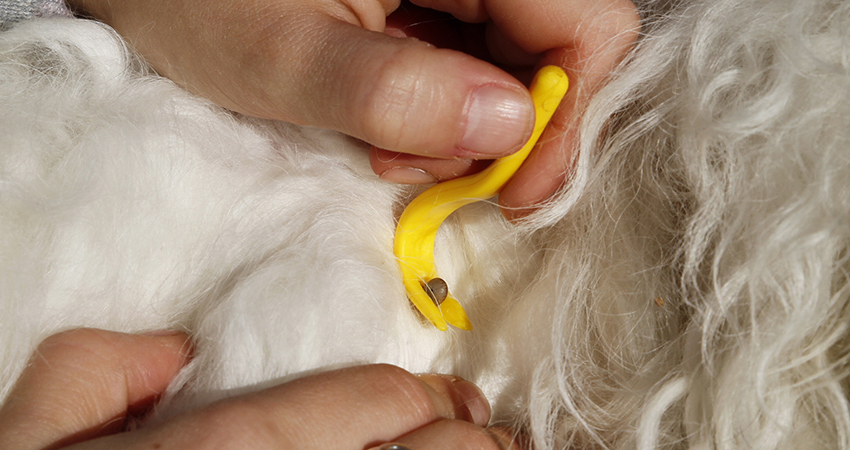 Specially designed plastic tick removers like these ones by Tick Twister are widely sold by vets, and easily found online.

They slide underneath the tick on either side of it’s mouth parts, so the tick doesn’t get squeezed. This greatly reduces the risk of transferring tick diseases during removal.

And because they’re made from plastic, you won’t accidentally pierce or scratch your dog’s skin.

Once the tick remover is in position, simply lift the tick bug off by pulling straight upwards using a steady, even pressure.

Dog tick removal: what to do if the mouth parts get stuck

Some tick species, including the lone star tick, produce a special kind of cement around their mouth parts to hold themselves in place while they feed.

Sometimes this makes it more likely for the mouth parts to break off and stay in your dog’s skin when you remove a tick.

If any of the mouth parts are left behind, they need to be removed too.

If you can reach them with sterilized pointed tweezers, you can do this yourself, otherwise call your vet and ask to drop by so they can help.

Once the tick is completely removed, clean the area with an appropriate antiseptic formulated for dogs (you can find these at your local vet or pet store).

Looking after a dog tick bite

Most tick bites are quickly forgotten, but it’s always wise to:

Ticks are usually nothing more than an irritation, but they can also be carriers for more serious infections.

Recorded cases of tick diseases have been increasing in the last couple of decades, partly due to better diagnosis techniques, and partly because of our own lifestyles and the increasing ease of travel, which speeds up the spread of tick populations and infected dogs.

Some tick borne diseases are specific to particular species of tick, and some are more prevalent in some geographical areas than other.

Here’s a quick run down of the most common diseases from ticks.

Lyme disease is carried by ticks all over the world, but within the United States it is a particular problem in the upper midwest and coastal states.

Lyme disease symptoms in dogs include:

There is no one “Lyme disease tick”, but Lyme disease does seem to be particularly associated with deer ticks.

Rickettsial infections are diseases carried by Rickettsia species of bacteria.

Different Rickettsia species cause slightly differing illnesses, but they all operate by inhabiting and destroying the host’s white blood cells.

All kinds of tick can carry rickettsial infections, so they’re found widely all over the world.

Ehrlichiosis is another bacterial infection of the white blood cells, and this time for some reason German Shepherds are particularly prone to it.

Tick fever is a slightly misleading and confusing term used to describe some infections carried by tick bugs.

Basically, it’s a bit of a catch all term for a set of symptoms, but not consistently a thing in itself.

Symptoms of diseases from ticks often take weeks to appear.

If your dog begins to show any of the symptoms listed above, take them to see their vet immediately, and tell them that your dog was bitten by a tick.

If you managed to identify the tick species responsible, let your vet know.

Your doctor may carry out blood tests and urine tests to establish which infection your dog has, and then prescribe medication to kill the infection and treat the symptoms.

The good news is, a lot of tick bites can be easily prevented by regular use of a tick treatment.

Popular brands of tick treatment include Preventic, K9 Advantix and Frontline. Treatments are usually topical spot-on liquids or chemically-impregnated collars, and quite often double up to work against ticks and fleas.

They work repelling ticks so they don’t bite, or poisoning ticks after they have bitten, so they fall off again. Some also prevent transmission of tick borne infections.

Your vet can help you choose the right tick prevention regime for your dog, although you might find that the product is easily available to restock online or over the counter, once the regime is set up.

These treatments are very effective, as long as you follow the instructions for replacing or re-applying – efficacy drops off rapidly when the active ingredient is depleted!

More ways of avoiding ticks and diseases from ticks

Besides chemical treatments, there are some practical steps you can take to avoid ticks on dogs (and tick bites on humans!)

Ticks are an increasingly widespread problem, and so are the infections they carry.

However, disease-carrying ticks are still in the minority, and by using a regular tick prevention treatment and removing ticks that do bite promptly, it’s easy to keep the risk of infection low.

Invest in a tick remover now and keep it somewhere where it will remind you to check your dog regularly (by the front door for example).

If your dog has been bitten by a tick and you are worried about symptoms of a tick borne disease, take them to the vet.

If you can identify tick species yourself that’s great, but don’t let it worry you – you can always take a photo on your phone instead!

What are your experiences of ticks in dogs?

Are ticks a big problem in your area? Are you a pro at getting rid of ticks? Share your stories in the comments section below!