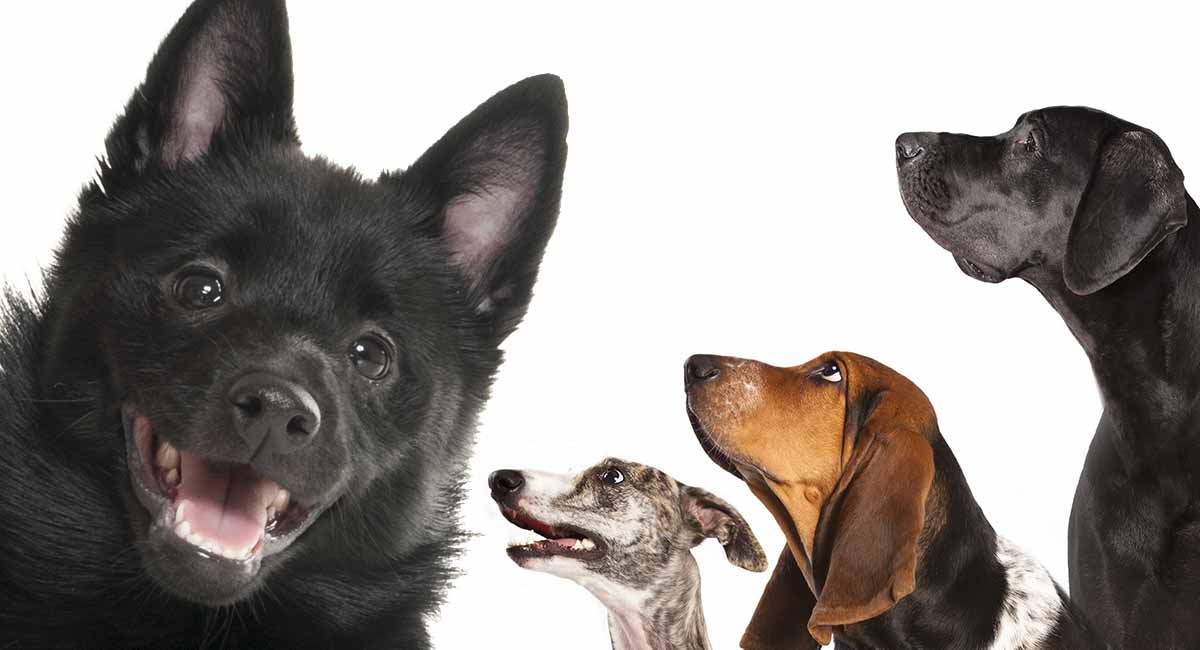 Schipperke mixes are adorable combinations that you have to check out! The Schipperke dog breed may not be a household name, but this pint-sized Belgian pup bears a fascinating history!

The Schipperke’s story began in medieval northern Belgium and made its way steadily across the globe, until the breed was formally recognized and registered by the American Kennel Club in 1904.

In this article, learn more about some of today’s most popular Schipperke mix dogs!

The Schipperke is a modern-day descendant of a now-extinct large, black, Belgian sheepdog named the Leauvenaar.

In Belgium, the name is pronounced “Sheep – er – ker.” In America, the more typical pronunciation is “Skip – er – ker.”

This tiny dog takes its name from the root word “schip,” which means “boat.” Today, this breed is still affectionately known as the “Little Captain.”

While the Schipperke is known to excel at herding livestock, hunting small game, canine athletics, and guarding homes these dogs also love snuggling with their people!

The “Little Captain” is little indeed – this black fluffball’s full adult weight range is between 10 to 16 pounds and most adults stand just 10 to 13 inches tall.

In past decades, the Schipperke’s tail was often docked during the first week of life. Puppies can be born with full tails, half tails or nubs. Outside the United States, the practice of tail docking is now banned in most places.

A well-bred, well-socialized and trained Schipperke can live happily in any size space providing their daily exercise and play needs are met.

However, a bored, neglected or isolated Schipperke can quickly turn into a relentless barker as well as a threat to home furnishings and landscaping.

The Schipperke’s lush, full, double-layer coat is fairly straightforward to maintain. In most cases, a weekly brushing and the occasional bath will suffice.

But this double-coated pup will shed year-round and seasonally will do something called “blowing coat” which may make you think you have a much larger, hairier dog!

The Schipperke’s typical life expectancy is 12 to 14 years.

Hybrid breeding is a very specific type of canine breeding program based on a theory called “heterosis” or “hybrid vigour”.

This theory proposes that it is possible to strengthen the purebred gene pool for future canine generations by adding new genetic diversity without losing desirable traits.

However, whenever a Schipperke is mixed with another breed, there’s no guarantee which qualities their puppies will inherit from each parent.

So it’s important to love both parent breeds before you commit to their offspring!

Let’s see what mixes you might meet when you search for different Schipperke types.

Also known as an: Affenschip

The Affenschip is a pint-sized pup weighing between 7 and 16 pounds. This dog can live as long as 12 to 15 years.

The Affenpinscher influence will likely modify the Schipperke’s tendency to shed. But brushing will still be a priority.

This pup can inherit some of the health concerns associated with the Affenpinscher’s shortened (brachycephalic) muzzle shape.

Also known as an: Aussieschip

The Aussieschip generally weighs 10 to 65 pounds. A typical lifespan for this dog is 12 to 15 years.

This dog will shed – you can count on it! Regular brushing will come in handy to control seasonal shedding in particular.

This dog inherits a smart, lively, active personality from both parents. But as an added bonus your Aussieschip will likely inherit some degree of the Australian Shepherd’s knack for learning tricks!

Also known as a: Border Schipper

You can expect your Border Schipper’s adult weight to range somewhere from 10 to 55 pounds. The life expectancy for this hybrid dog is 12 to 15 years.

Regular and seasonal shedding will occur in this hybrid dog.

If your puppy takes more after the Border Collie parent, you may want to enroll your dog in canine sports to burn off some excess energy.

Also known as a: Schiphuahua

The influence of the Chihuahua breed is going to make the Schiphuahua a petite pup weighing 6 to 16 pounds.

This dog may not shed much depending on which parent dog’s influence dominates.

The Schiphuahua will be at risk for some of the health issues associated with the bracycephalic (flat) muzzle shape from the Chihuahua side.

Also known as a: Corgischip

The Pembroke Welsh Corgi is the Corgi breed most commonly used in hybrid breeding programs. The Corgischip weighs anywhere from 10 to 20 pounds with a lifespan of 12 to 15 years.

Corgischips inherit some degree of the shortened legs characteristic of the Corgi breed.

Also known as a: Schippershund

The Schippershund has an adult weight range of less than 11 pounds to 32 pounds. You can expect a Schippershund to live 12 to 16 years.

Notably, this pup may not shed as much depending on the dachshund’s coat type (smooth, wire, short or long). This dog is likely to make an excellent watchdog!

Expect your Schippershund to display somewhat shortened legs as per the Dachshund’s breed history.

Also known as a: German Schipperke

This hybrid dog is going to be one of the largest in the hybrid group featured here. The German Schipperke’s adult weight range may be anywhere from 10 to 90 pounds! This dog’s typical life span ranges from 7 to 15 years.

The German Schipperke sheds year-round and seasonally, but the coat is typically easy to maintain.

Expect a dog that is friendly with “their” people but somewhat reserved around people and animals unknown to them. This dog has a strong guarding instinct.

Also known as a: Schipperke Retriever

What you can expect with this dog is lots of shedding!

A bigger wild card is whether your pup will have any guard dog ability (Labs often don’t while Schipperkes definitely do). But expect a loving and loyal dog for sure!

Also known as a: Schippese

The Schippese is a very small toy-size pup, weighing anywhere from less than 7 pounds to 16 pounds. This hybrid dog has a life expectancy of 12 to 15 years.

You probably won’t see much shedding due to the Maltese’s influence, but brushing is key to keep tangles from forming.

From the Maltese side, be aware of some potential health issues, including the brachycephalic (flat) muzzle shape and hydrocephalus (water on the brain).

Also known as a: Schipapin

The Schipapin likely weighs anywhere from 8 to 16 pounds fully grown. This dog is petite yet sturdy – a natural athlete. The Schipapin’s general life expectancy is 12 to 16 years.

While you may see moderate shedding year-round and seasonally, maintenance brushing is easy and quick.

This pup will probably not realize they are small and can make an excellent watchdog.

Also known as a: Schipapap

Crossing the butterfly-eared Papillon with the full-coated black Schipperke gets you the Schipapap, a pup that is sure to stand out. This dog weighs 5 to 16 pounds and can live 12 to 16 years.

Your Schipapap may not shed at all or just moderately depending on which parent dog your puppy most favours. Brushing is key to keeping tangles from forming.

These fun-loving, adventurous, petite pups don’t seem to know it, but they are delicate and may need extra supervision to keep them from jumping down from furniture and causing leg injuries.

Also known as a: Schipapom

The Schipapom is one of the tiniest pups in this hybrid dog group, weighing anywhere from just 3 pounds to 16 pounds. Their life expectancy is 12 to 16 years.

This dog may not shed visibly all that much, but brushing is a near-daily necessity to remove shed hair trapped in the coat before it can mat.

Your Schipapom will have some degree of the brachycephalic (flat-faced) muzzle type from the Pomeranian side. This muzzle shape can bring certain lifelong health concerns.

Also known as a: Schnauzerschip

The Schnauzerschip is a small dog weighing 10 to 20 pounds. This dog lives 12 to 15 years on average.

You can definitely ease your brushing and grooming duties with this mostly non-shedding hybrid by opting for a close clip.

The Schnauzerschip is an excellent, and enthusiastic, athlete.

Also known as a: Schipperpoo

The non-shedding Poodle is a favorite for hybrid breeding programs. Here, the Poodle parent is typically a miniature or toy Poodle rather than a standard.

Expect an adult Schipperpoo that weighs 4 to 16 pounds and has a lifespan of 10 to 18 years.

This dog will likely be a natural and enthusiastic athlete and may also enjoy swimming!

Also known as a: Schipapug

This dog will likely inherit a coat that is fairly easy to brush and maintain, but will shed.

Your Schipapug will likely inherit some of the health issues known to affect flat-faced (brachycephalic) dogs like the Pug.

Also known as a: Rataschip

The Rataschip weighs 10 to 25 pounds and is a sturdy, athletic little dog. This dog has a life expectancy of 12 to 18 years.

This pup will do well with a weekly brushing.

Expect your Rataschip to be lively and fun-loving as well as an enthusiastic student at training time.

Also known as a: Schibaschip

This dog sheds year-round and seasonally.

Be sure to check your state’s dog laws and talk with your insurer before welcoming a Shiba mix pup into your family. These dogs may not be permitted in all states.

Also known as a: SchipTzu

The SchipTzu won’t weigh more than 9 to 16 pounds as an adult and generally lives 10 to 18 years.

This dog may not shed at all if your puppy takes more after the Shih Tzu. Otherwise, shedding will be light. But be prepared for lots of brushing to keep your dog’s coat tangle-free.

Be aware that your pup may inherit the brachycephalic (flat-faced) muzzle shape from the Shih Tzu parent.

Also known as a: Westeke

Keeping your Westeke in a short puppy clip will definitely ease your grooming duties, especially if your pup takes more after the Westie parent!

This dog is active, playful and a natural athlete.

Also known as a: Yorkieschip

The Yorkieschip weighs anywhere from less than 7 pounds to 16 pounds and has a typical life expectancy of 11 to 15 years.

This dog may not shed depending on which parent (the non-shedding Yorkie or shedding Schipperke) your puppy takes after. But with the Yorkie influence comes lots of brushing to avoid tangles!

Health-wise, this puppy will likely be affected by the short muzzle shape called brachycephalic (flat-faced) that brings with it certain known health issues.

Is A Schipperke Mix Right For Me?

Schipperke mixes are typically small, so they will be happy with any size home as long as they are kept active and entertained!

Do you have a favorite Schipperke mix pup out of the dogs you’ve just met here? Please share your favorites in the comments!